A few hundred yards north of the centre Bebek, on the road to Rumelihisarı. Buses pass regularly. No one notices.


On paper, the road up the European shore would appear to be one of the great waterside drives. But in practice few ever attempt the 17 miles from downtown Karaköy to rural Rumelikavağı – the point where the road loops inland for another five miles to reach the entrance to the Black Sea.

One reason, apart from the traffic, is that Istanbul residents think of the Bosphorus as a series of disconnected communities rather than a joined-up whole. It is only since the Second World War that there has been a coastal road at all – the final stretch having been built in the 1980s as an embankment on pylons, a cheap artery through the city that did not require great sums to appropriate private land. In places such as Arnavutköy, on the European side, the road actually severs the shoreline houses from the water.

Another reason why few attempt the road trip, although there are lots of buses, is that for long stretches you can’t actually see the Bosphorus. Many yalıs, the stately summer homes of the Ottoman Empire, are tucked below the road, and others have high walls between the road and what was, after all, the servants’ entrance at the back.

Obviously, the best way to appreciate the Bosphorus is to travel by boat. The yalıs are themselves worth a detour, as they show their best face to the water. There are ample ways to do this, with companies running boats you can jump on and off like an inner-city bus.

Kuruçeşme to Rumelihisarı: Setting sail
The first half of our journey up the European shore takes in the villages between the two bridges. Setting out from Kuruçeşme, sadly bereft of its beautiful yalis, we head upstream via arty Arnavutköy and smart Bebek to the pavement buzz of Rumelihisari

Baltalimanı to Sarıyer: Bound for the Black Sea
From the genteel old-money districts of Baltalimani and Emirgan, head north for the stately yalis and café society of Yeniköy, then the faded grandeur of Tarabya and Büyükdere and the gritty trawler town of Sarıyer 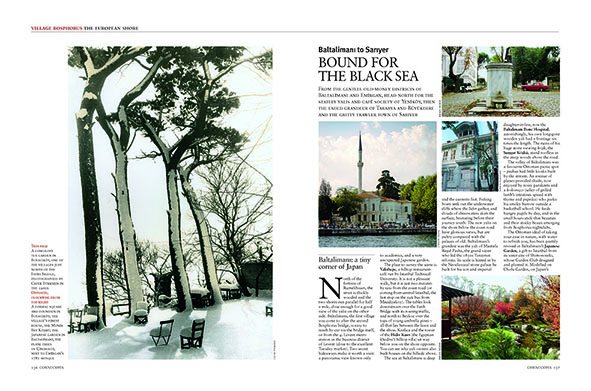