Store > Books > My Name is Red 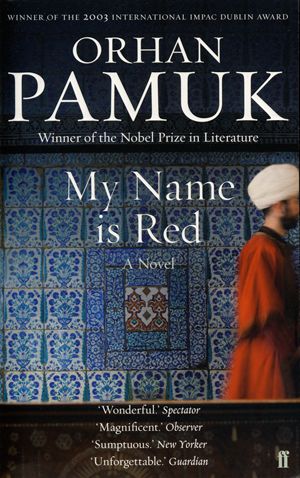 My Name is Red

In August 1599 the Lancastrian organ-maker Thomas Dallam arrived in Istanbul with a specially designed water organ, complete with a timepiece and statues, as a gift for Sultan Mehmed III. Queen Elizabeth was anxious to curry political and commercial favour with Mehmed, and had commissioned the extraordinary organ as the centrepiece of an array of gifts for the sultan and the grand vizier. Dallam proceeded to install and then perform on his organ in the royal private garden of the Topkapi Palace, to the astonishment of the sultan and his retinue.

Describing this bizarre incident towards the end of his remarkable new novel, My Name is Red, Orhan Pamuk recalls that, some years later, “Sultan Ahmed, the subsequent sovereign, seized His mace and descended from the harem to the Private Garden, where He shattered the clock and its statues to pieces”. The Prophet had come to Ahmed in a dream and warned him that “If Our Sultan allowed his subjects to be awed by pictures and, worse yet, by objects that mimicked Mankind and thus competed with Allah’s creations, the sovereign would be diverging from divine will”. This religious backlash against artistic representation brought to an end the golden age of Ottoman art, which had emerged from artistic influences drawn from Persia, China, India and, most controversially, Western Europe.

It is this turbulent period in Ottoman history, towards the end of the sixteenth century, that provides the setting for Pamuk’s extraordinarily ambitious novel. Pamuk is Turkey’s leading novelist, and his previous historical fiction has repeatedly drawn on the history of the empire to make sense of contemporary Turkey’s ambivalent relationship towards modern-day Europe.

On its original publication in 1998, My Name is Red became a publishing phenomenon, selling over 100,000 copies in Turkey. With the publication of Erdag Göknar’s elegant English translation, it is set to become one of the most internationally acclaimed novels of recent years.

The brilliance of the novel lies in its ability effortlessly to combine several fictional genres into one. Part murder mystery, part love story, the book is above all a fascinating exploration of the pleasures and dangers of artistic creativity. The story centres on the return to Istanbul of Black, an itinerant secretary and part-time commissioner of illustrated manuscripts. Black has been invited back to the city by his uncle, Enishte Effendi, to work on a controversial book of illustrations for the sultan which aim to “use the science of perspective and the methods of the Venetian masters”. Even more scandalously, the book will reproduce the likeness of the sultan himself.

Black is immediately embroiled in a deadly world of frustrated passion and political intrigue. Having left Istanbul following the marriage of his cousin and childhood sweetheart, the beautiful Shekure, he now finds her vainly awaiting the return of her husband, killed in the Persian wars. Their childhood romance is rekindled. However, their clandestine relationship is overshadowed by the murder of Elegant Effendi, an illuminator working on Enishte’s secret book. When Elegant’s murderer strikes again, Black is pitched into a desperate race against time to track down the murderer and secure Shekure’s hand in marriage before both he and his uncle’s cherished project are destroyed by religious intolerance and political skulduggery.

His quest takes him on an extraordinary journey into the history of Eastern art – from Herat and Tabriz to Venice and to the very heart of the Ottoman court, and an encounter with “His Excellency, Our Sultan, the Refuge of the World”.

While the murder and the romantic elements of the novel will absorb the general reader, My Name is Red is also a profoundly philosophical meditation on the nature of art and creativity from a specifically Ottoman perspective. What troubles the novel’s painters and authorities is how close the development of an individual artistic style comes to questioning, or even rivalling, God himself.

In several brilliant and often funny moments, the dogs, horses, trees, coins, even pigments (such as red) which make up Enishte’s miniatures are given their own monologues, where they worry that painters try to “depict the world that God perceives, not the world they see. Doesn’t that amount to challenging God’s unity, that is - Allah forbid - isn’t it saying that I could do the work of God?”

Pamuk’s fictional painters also debate the destructive impact of Western perspective and portraiture on art. Enishte Effendi’s book is attacked as “the Devil’s work, not only because the art of perspective removes the painting from God’s perspective and lowers it to the level of a street dog, but because your reliance on the methods of the Venetians as well as your mingling of our own established traditions with that of the infidels will strip us of our purity and reduce us to being slaves”. Ultimately, the novel does not endorse this vision of artistic and religious purity. On the contrary, it is a deeply moving exploration of the dilemmas facing both Eastern and Western artists, which refuses to ignore the specific qualities of both ways of seeing and representing the world.

This is a brilliant novel that will delight anyone who knows anything about Islamic art and Ottoman history, and will fascinate and entertain those new to these subjects. At a time when so much is being said to denigrate the culture of Islam, Orhan Pamuk’s My Name is Red is an eloquent and important affirmation of an artistic tradition that the West has been far too quick to dismiss or exoticise.

Jerry Brotton’s ‘The Renaissance Bazaar: From the Silk Road to Michelangelo’ (OUP), is available to Cornucopia subscribers.