Store > Books > The Story of the Damascus Drum 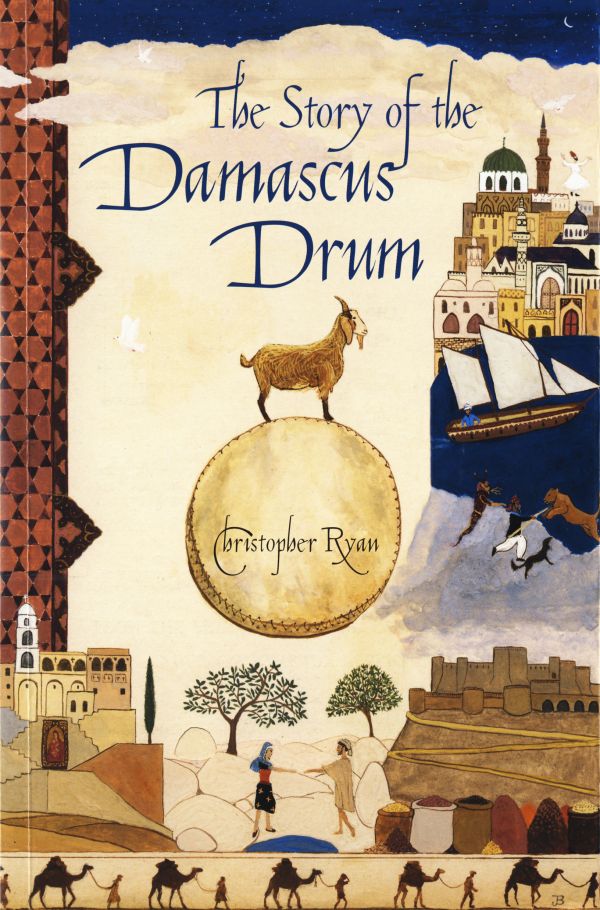 The Story of the Damascus Drum

From the author: In the ancient city of Damascus, behind the great Umayyad mosque, there is a little café called Al Nawafara - Here every afternoon, a storyteller, the ‘Hakawati’, comes dressed in exotic robes, and entertains customers and passers by for an hour with thrilling tales from Syria’s heroic past, stories sewn with subtle threads of contempory social and political comment.

Reviews for The Story of the Damascus Drum

Cut throat bandits ambush a camel caravan at night, leaving only one survivor: Daud al-Arwadi, a Syrian merchant now bereft of his entire fortune and 40 good men. The shadowy underworld of 19th century Syria springs into the hunt for Daud when the robbers’ gruesome headcount reveals a shortfall of victims.

But the villains’ efforts are fated to fail. Daud has since taken up the guise of a lonely desert goatherd and one by one the would-be assassins meet their maker by almost natural causes, before the whole web of corruption and criminality is smashed by a spy of the Sublime Porte.

Yet revolve as they may about Daud al-Arwadi, such intrigues are not his primary concern. For in his pastoral meanderings Daud has embarked upon a remarkable inner journey, traversing the limits of time and space, joining his being with that of the universe Itself. This is a work of what you might call Sufi Realism, whose key character is arguably Muhyiddin Ibn ‘Arabi, a 12th -century mystic with his shrine in Damascus. Although he doesn’t feature in person here, Christopher Ryan does not hide influence of the Great Sheikh on his story, and even Shams, the billy goat whose skin becomes the drum of the title, has his life-force extinguished during a heroic bout of procreating – surely the bestial equivalent of a Sufi’s fana, or annihilation, in union with the beloved. And the role of neither goat nor mystic ends there. Shams becomes a sort of totem, speaking through the drum to guide Daud through the strange states encountered on his new life as a hermit come herdsman.

It is as fun, profound and - at times - as bizarre as it sounds. There is a love story at the heart of the novel, between Daud and Takla, a beautiful young servant at the monastery of Seydnaya. After one fleeting meeting, their paths correlate without crossing for years, fate determining that the annual visit to the she-goats of Seydnaya by Daud and Sham’s successors falls at Easter - the only week when Takla returns to her family (routine being no match for true love in the end, of course).

Itself a labour of love (the author owns a small café in the Scottish Borders town of Hawick also called the Damascus Drum), this novel has been in the works for years, emerging with almost as much serendipity as the events within its pages. On a recent visit to Istanbul, Christopher Ryan told me how he stumbled upon a book of engravings by Edward Whymper in a local charity shop. These now illustrate the book beautifully, matching not only the scenes of the story with uncanny accuracy, but the intricacy of the prose and the mood of wonder at a strange and far-away land.

The Story of the Damascus Drum is a fabulous adventure story, scented with magical realism and resonating with a talking goatskin drum, that is set among the historical monuments of Syria, so that the reader gets to explore the island of the shipbuilders (Arwad), the cavernous vaults of the ruinous Krak des Chevaliers, the nunnery of Seydnaya and the old khans and mountainous hinterland of Damascus during the course of the tale. Although located in the late 19th century, it takes place in a timeless Levant, a crossroads of faiths still dominated by loyal servants of the sultan-caliph, not yet the 20th-century Baathist fortress of Arab nationalism.

Indeed the real landscape of the Damascus Drum is not of this world. Rather, it is shaped by Tales from the Thousand and One Nights and by the interior world of itinerant storytellers working their magic in the cafés, courtyards and festival gatherings of the past. So we can hiss at the vile machinations of the brigands, scheming villains, paid assassins and evil masterminds, as we fall further and further in love with both hero and heroine.

The Story of the Damascus Drum is also consciously part of that ancient Near Eastern tradition that buried valued spiritual teachings within a fast-paced plot or a comic short story. So running within the body of the tale is the everyday story of two individuals working to increase their self-discipline as a tool in the lifelong struggle first to understand, then make better use of themselves. Adepts might identify the teachings of ancient prophets and some modern and medieval saints among the book’s characters and sacred landscapes. Fortunately, there is also enough bawdy laughter and Midsummer Night’s Dream humanism to enchant a wider audience and perhaps also get them drumming.

Barnaby Rogerson is the author of ‘The Last Crusaders: The Hundred-Year Battle for the Centre of the World’ (Little, Brown £20)