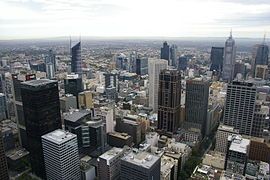 There is no shortage of Turkish restaurants in Australia's most populous Turkish city, particularly in the north-western suburbs. Turkish music and dance enliven the Bowl on Australia Day (January 26), Queen Victoria Market has an annual Turkish Pazar, and a Turkish Film Festival is held each December. A thoroughly modern city, Melbourne is one of the most architecturally interesting in Australia, with handsome Victorian homes and public buildings, and attractive shopping lanes in its centre, though none of the dozen or so Victorian-era Turkish baths have survived. The Sunshine Mosque built by the Cyprus Turkish Islamic Society in 1992, was designed along the lines of Istanbul's Sultan Ahmed Mosque.