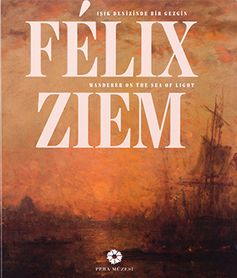 Wanderer on the Sea of Light / Işık Denizde Bir Gezgin

This is the catalogue that accompanied the Pera Museum’s 2016–17 exhibition of the French artist Félix Ziem (1821–1911), organised in collaboration with Musée Ziem in Martigues, France. Ziem was one of the most original landscape painters of the 19th century and is perhaps best known for his paintings of Istanbul and Venice, where the city and the sea are intertwined.

Félix Ziem had visited Istanbul during the Crimean War (read more about the war in Cornucopia 49). Yet rather than reflecting the turmoil of war, his oil paintings are lively and colourful. He was able to capture the flickering effects of the continuously changing light by using a rapid and dynamic brush style, and he is regarded as a pre-impressionist painter, who endeavored to capture the vibrating effects of the ever-changing light by means of lively colors and fast, dynamic brush stroke techniques.