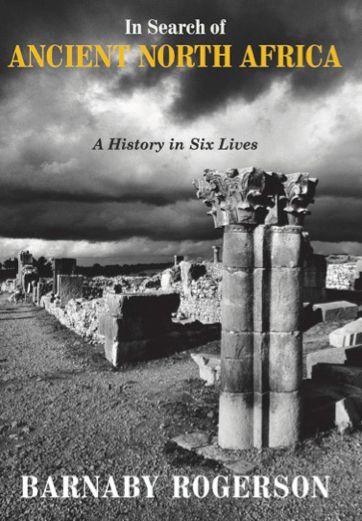 In Search of Ancient North Africa

A History in Six Lives

By Barnaby Rogerson with
photographs by Sir Donald McCullin

The ‘six lives’ of the title are the subjects chosen by Barnaby Rogerson who has spent much of his life travelled across, and writing about, North Africa. This book visits the ruins of a landscape, where he has sometimes enjoyed picnics, as he contemplates the past. The six live are Queen Dido of Carthage, King June, the prisoner-of-war who became King Juba, a compliant tool of the Roman Empire; Septimus Severus, the unpromising provincial who, as Emperor, brought the Empire to its dazzling apogee; St Augustine of Hippo an intellectual careerist who became a bishop and a saint, the great General Hannibal, and Masinissa, the Berber Cavalry General who eventually defeated him. All six lives have been clouded with as much myth as fact, but the destinies of these North African figures remain relevant today., as their descendants are faced with the same choices: Do you stay pure to your own culture and fight against the power of the West, or do you study and assimilate this other culture, and utilise its skills? Will it greet you as an ally only to own you as a slave? In between these life stories, are explorations of ruins that tell their own tales and see the multiple interconnections that bind the culture of this region with the wider world, particularly the spiritual traditions of the ancient Near East. Twelve black-and-white photographs by Don McCullin help to being atmosphere to the scenes.

Barnaby Rogerson is an author, critic, television presenter and publisher. He has written extensively about the Muslim world, including a biography of the Prophet Muhammad, and numerous travel guides. His recent books include The Last Crusaders (Little, Brown) and Book of Numbers: The Culture of Numbers from 1001 Nights to the Seven Wonders of the World (Profile). He is the Publisher of Eland Books, specialists in classic travel writing.