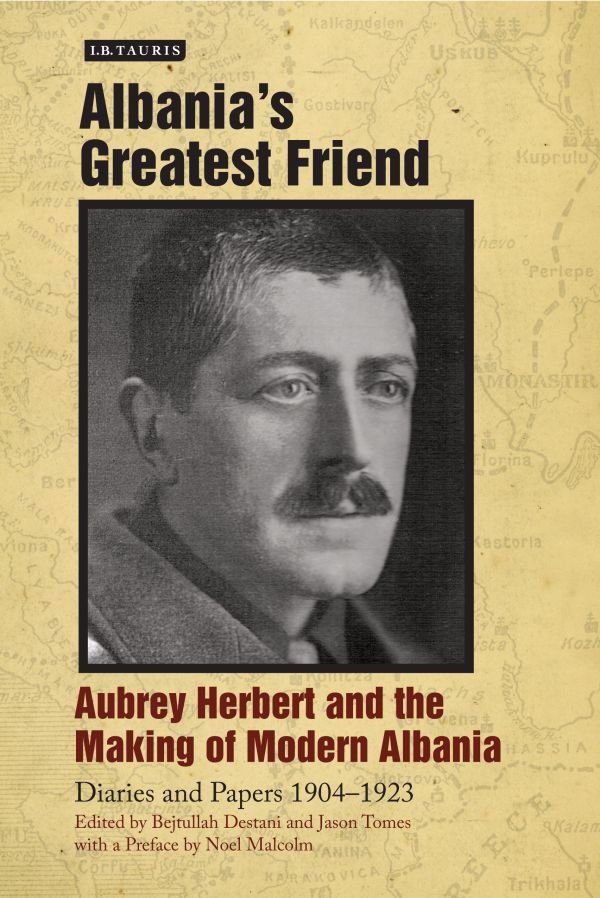 Aubrey Herbert and the Making of Modern Albania. Diaries and Papers 1904–1923

Ed. Bejtullah Destani and Jason Tomes, with a Preface by Noel Malcolm

A Good Man in Albania

When the British started the Gallipoli campaign in 1915 there was much over-confidence at work: the Turks would never be able to stand up to the Anglo-French naval and military assault. There seem to have been only two men in London who warned that the Turks would indeed be tough nuts. One was a regimental colonel, Doughty-Wylie, who had served in a peace-keeping consular role in Adana, liked the Turks, served in their medical Red Crescent in the Balkan Wars of 1912-13, and landed at Gallipoli armed with a swagger-stick, saying that he could not kill Turks (he was shot, as it happens, and received a posthumous VC). The other was the subject of this book, Aubrey Herbert.

Quite how Herbert came to understand the Turks as he did is something of a mystery. Most Englishmen (and Europeans) had written them off by 1912; the Greeks especially looked likely to take over the Levant, as the Anatolian Muslims not only counted as backward and illiterate, but also made fewer babies than the Christians. In the Balkans the situation was the same and, as Greece or Serbia expanded, their chiefs regarded part-Muslim Albania as natural booty. Aubrey Herbert spoke up especially for the Albanians, and this scholarly edition of his private diaries and correspondence is recognition, delayed by Albania’s bout of Communism.

It is introduced by Noel Malcolm, who can count as Aubrey Herbert’s successor, in that he too spoke for the Albanians when this was very unfashionable and even downright eccentric. He too ran into determined Greek and Serbian opposition, well entrenched in key positions in London: the Albanians have enemies, and in the period covered by this book – it centres on the First World War – there was always a question that the country might just disappear. Serbs and Montenegrins wanted the north (which includes Kosovo) and Greeks the south. The barrenly mountainous middle would have been nominally independent, under a cat’s paw, up for sale to anyone.

There is a tradition, stronger in Great Britain than elsewhere, of people adopting Balkan countries – it goes back to Byron and the Philhellenes – but Aubrey Herbert was a Turcophile, as the result of a prolonged stay in 1904. At the time of the Crimean War, Turcophilia was common enough, not just because the Sultan was Great Britain’s ally, but because Turkey was a force for progress, as, at the time, Tsarist Russia was not; but by 1895, given Abdul Hamit’s despotism, it was no longer “tone” to adopt Turkey, and she was being written off. Aubrey Herbert’s own family – he was the second son of the Earl of Carnarvon, who took up the Armenians’ cause – did not approve. But he learned the language, as well as Arabic and Greek, and got to know the Young Turks who took over in 1908.

They were revolutionaries of a sort, desperate to put life into the feeble Ottoman state, but they initially weakened it, and they were rather naïve as to what the foreigners would do. They proved predatory. The Austrians annexed Bosnia; the Bulgarians declared independence. The Russians and British had made a pact, and since they were in effect running the southern Balkans, then no doubt Macedonia would soon go. The Albanians had hitherto been the most loyal Ottoman subjects, and though very conscious of their nationality – after all, the oldest in the Balkans, with a language so old it constitutes a branch all its own of the original Indo-European – defined themselves in terms of loyalty to the Ottoman sultan.

However, in the light of the patronage being given by Europeans to Balkan nations struggling to be free, ie to take over the lands of others, intelligent Albanians could see that it was time to develop a nation of their own. The Young Turks made this easier than it might have been, because they tried to “Ottomanise’’ the Albanians, through education and linguistic prohibitions.

By 1910 Albanian mountaineers had started a war of independence, and this so weakened the Ottoman state that in 1911 the Italians and in 1912 the Balkan states attacked it. The Ottoman empire then imploded, losing almost all of its European provinces. This did not help the Albanians, who were betrayed by their neighbours; and this is the origin of today’s vicious problems concerning Kosovo and a country that, because of Greek sensitivities, we have to call FYROM, ie the former Yugoslav Republic of Macedonia. It has an Albanian minority, and if in 1913 and again in 1919 the borders had been drawn on ethnic lines, Albania would have a much more workable character. As things were, she lost the more go-ahead parts to other countries, and risked disappearing from the map. The Serbs wanted to take the chief ports of the north, then known as Durazzo and Scutari, and the Italians wrestled with the Greeks for Valona in the south. Meanwhile there were horrible massacres of innocents, which revolted anyone on the ground.

There was nothing in Aubrey Herbert’s background to cause him to sympathise with the Albanians. He was an Etonian of grand aristocratic background, descended from the Earls of Pembroke, and flitted from the Foreign Office to the House of Commons without too much trouble. However, he adopted the Albanian cause, and was even offered the Crown (he preferred Somerset, and anyway doubted if he had the resources to take on the job, given that Albania had no money). Through the years after 1912 he sat on committee after committee, fending off Philhellenes who were concealing the atrocities going on in the Epirus. In the war, despite ill health and poor eyesight, he served in uniform and acted as interpreter when there were truces with the Turks in Gallipoli or Mesopotamia. When the war ended he tried to uphold the cause, at Versailles, of an Albania that lacked any kind of infrastructure of government.

He recommended that she become an Italian protectorate, the least bad choice in his opinion. That is, I suppose, how Albania has developed after her extraordinary experience with Communism, when she turned into a sort of Adriatic North Korea; and nowadays the Turks are back, with Fetullah Gülen schools that are apparently the best in the country. Turkey and Italy: not ideal, but better than Yugoslavia and Greece.

This is an endlessly interesting book, which will tell you much about a good man, striving in an impossible Balkan mess to do the right thing.