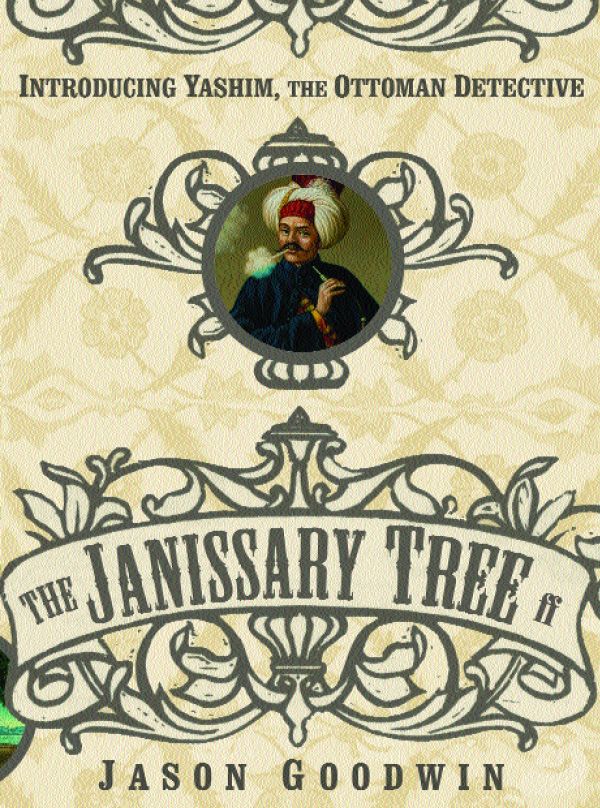 ‘Thankfully Yashim has more going on upstairs than down.’
Andrew Finkel

A fabulously rich and entertaining novel of detection and conspiracy in nineteenth-century Istanbul. Translated into thirty-one languages worldwide.

One bloody night in 1836: a young concubine is strangled in the Sultan’s harem, a young cadet is butchered in the streets of Istanbul. Yashim the eunuch has just ten days to uncover a plot – and prevent a killing – that could bring the Ottoman Empire to its knees.

‘There are chases, dramatic escapes, episodes of cruelty, delicious food, glamorous sex, and an elegantly achieved solution to all the mysteries. Intelligent, elliptical and beguilingly written, The Janissary Tree is a rare pleasure.’ The Times

Nothing but the Sleuth

Istanbul: city of mystery. You might not think so commuting home in traffic but a growing bevy of crime writers are using the city, past and present as the setting for some pretty rum goings-on.

At the end of chapter one of Jason Goodwin’s The Janissary Tree we learn that “Yashim was a eunuch”. It is a revelation on a par with discovering that the Snark was a Boojum after all. Goodwin keeps a poker face as he guides us through what is – when you have a chance to think about it – a nonsense world of boiled corpses, harem girls and duelling-scarred Russian officers. It is 1836 and cadets in the Sultan’s new fighting force – and the odd royal concubine – are dropping like flies. It falls to Yashim, a freelance eunuch (nice work if you can get it) to solve the mystery. Along the way he meets Mustafa the Albanian soup-master, Preen the transvestite, Yorg the pimp, and two (presumably post-modern) fire-tower watchmen, Orhan & Palmuk.

It is all what the film posters used to call “a romp”. Goodwin has no truck with authenticity: the world he creates is full of atmosphere, painted with the best trope at hand and the odd brazen anachronism. He does, however, manage to evoke a stifled fury lurking in the shadows of Istanbul.

The book is set nearly ten years to the day after the Auspicious Incident – the massacre of the corrupt Janissary legions by Mahmut II – and it looks as though this vengeful praetorian guard are about to strike back.

One of best moments in the book is when our hero nearly meets his end in the tannery district, the threat to the realm a sulphurous menace lurking under the city.

Most sympathetic of his characters is Stanislaw Palewski, the down-and-out ambassador of what used to be Poland before its territory was swallowed up by greedy neighbours. “I am an ambassador without a country – and you a man without testicles,” he waxes, even as he invites himself to Yashim’s elaborately prepared supper.

Goodwin sets his eunuch up as man who isn’t quite a man and therefore an invisible, professional outsider who can negotiate the demarcated boundaries of Ottoman society. He has an entrée not just to the harem but to the guilds and the great embassies.

The story canters on in film-treatment style (there are 132 short chapters) all the way to a Bond sound-stage-style finale. Thankfully Yashim has more going on upstairs than down as he picks his way through clues that have been scattered with a semiologist’s care. The one unsolved mystery of the book is when the nubile but neglected Russian ambassador’s wife (naked, of course, beneath her furs) commands the eunuch to “take me, Turk” and he does. But how?