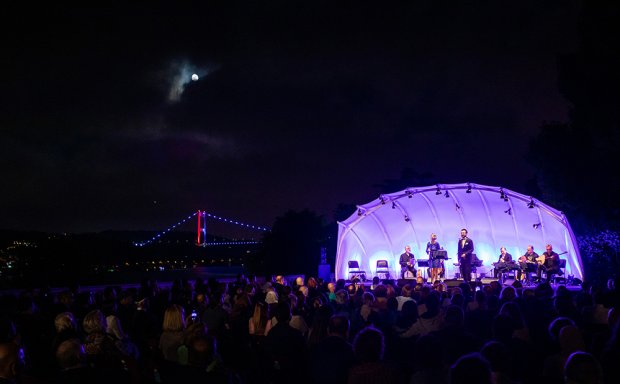 On Monday June 13 I went to a concert of Turkish classical music given as part of this year’s İKSV Music Festival, on the Fıstıklı Teras of the Sakıp Sabancı Museum in Emirgan. The fact that this terrace overlooks the Bosphorus is important in itself, but its significance increased to a marked degree as the evening progressed and the full moon came up over the Asian shore, peeping through bands of grey cloud. Just before the proceedings began, a flight of nine cormorants flew overhead; they were heading towards the city centre, but speaking for myself I was thankful to be in Emirgan rather than Eminönü. With that backdrop – lights just beginning to twinkle, and the tower of the Khedive’s Palace jutting out of the woods on a promontory on the opposite shore, commanding a corner of the waterway – what concert could possibly fail to please?

My choice of Turkish classical music as the focus of the first concert I attended during the İKSV Festival was a deliberate one. Some people may not know that for many years, the TRT (Turkish Radio and Television) was forbidden to broadcast Turkish classical music for the bizarre reason that it was not deemed to be sufficiently in accordance with the state’s pro-Western ideology. Frankly, it was thought unsuitable for Turkish ears as it was unlikely to please Western ones. My own attitude is that Turkish culture has no obligation whatever to please people who are accustomed to the products of a different cultural tradition. To use a Turkish phrase, Turkish classical music ruhu okşuyor – it ‘strokes the soul’. So what the hell? I like having my soul stroked, and care little for what anyone may say about my cultural preferences.

The stage, covered by a shell-shaped half-marquee, was illuminated by a blue light in the first half of the concert, and by a violet one in the second. As the sky grew dark, various revolving grey shapes – wheels and whorls – were projected onto the clouds above. The most impressive visual treats were, however, supplied by the trees in the museum’s garden. (I am now on first-name terms with several of these trees, and it was reassuring to be among friends.)

Readers who live within flying distance of Istanbul should make haste to see the Sakıp Sabancı Museum’s exhibition of paintings by Şehzade Abdülmecid Efendi, the second son of Sultan Abdülaziz; Abdülmecid Efendi was elected Caliph of all Sunni Muslims by the Turkish National Assembly on 19 November 1922, and held that office until the entire Ottoman Imperial family was exiled on 3 March 1924. This fascinating exhibition, with its numerous paintings of amazingly high quality (the man concerned was a gifted artist), is on until 30 June. The Sakıp Sabancı Museum is also hosting a David Hockney exhibition, scheduled to run until 29 July. (An aside: I saw David Hockney in the flesh at an exhibition of his paintings at the Whitworth Art Gallery in Manchester in 1968. On that occasion, Mr Hockney was wearing socks of different colours. I later heard that he had been denied entry to the Midland Hotel – one of the leading hotels in the city at that time – on the grounds that he was inappropriately dressed. Can one imagine anything of that kind happening now?)

At the appointed hour, six musicians walked onto the stage carrying a variety of instruments: a tef (an outsize tambourine – this was later replaced by a bendir, which is like an even larger tambourine, but has no bells), a cello, a kanun (a Turkish zither), a kemençe (a Turkish-style violin), an oud (a Turkish lute) and a tambur – an instrument with a small, round body, a long neck and strings that are plucked. The first item began with a long, slow introductory section in D minor played over a tonic pedal (i.e., a sustained D in the bass); then it perked up, and fell into a stately rhythm. After that, a male soloist came on stage, and the next three numbers featured his mellifluous tenor voice. Just as the moon was beginning to make its presence felt in earnest, a female singer appeared, and after a few solo items she joined the male singer in some duets. The audience began to clap and stamp their feet; then, at the very moment when the first half of the concert had come to an end and the singers were leaving the stage, the sound of the call to prayer was heard from the nearby Emirgan Mosque. Who is to say that that was not divine timing?

The pieces performed were by a variety of composers from different periods. One name I noticed was that of Petros Peloponnesios (otherwise known as ‘Peter the Lampadarios’, c. 1735–78). Described in his Wikipedia entry as ‘a great cantor, composer and teacher of Byzantine and Ottoman music’, he was lampadarios – that is, leader of the left choir – at the Great Church of Constantinople between 1770 and 1778. We are told that ‘large parts of the monodic chant sung in several current traditions of Orthodox Chant are transcriptions of his compositions, which he wrote down as a teacher of the ‘New Music School of the Patriarchate’; in addition, he had a strong association with the Mevlevi Dervish Lodge in Pera.

Of the many Turkish composers featured, by far the most famous was Münir Nurettin Selçuk (1900–81), who was also a singer of note; he perfected his art as a vocalist in Paris. Here are recordings of him singing two classics, accompanied by a choir: (firstly), Kalamış:

Both soloists at the concert in Emirgan had excellent voices, and their co-ordination with the instrumentalists was likewise flawless. I cannot conclude without a nod to the famous virtuoso Tanbûrî Cemil Bey (1873–16), the first person to play the tambur with a bow rather than pluck it. This recording of him in a piece entitled Ferahfezâ Saz Semâîsi should ideally be listened to on a balmy summer’s day as you swing gently in your hammock, perhaps consuming some innocent iced beverage. Palm-frond-waving lackeys are optional.

Thanks for the concert go to Işıklar Holding A.Ş., its sponsor, as well as (of course) to İSKV, the Istanbul Foundation for Culture and Arts. And, of course, the weather, for not raining on us and interrupting our soul-stroking with untimely squalls.