Getty sets out its stall 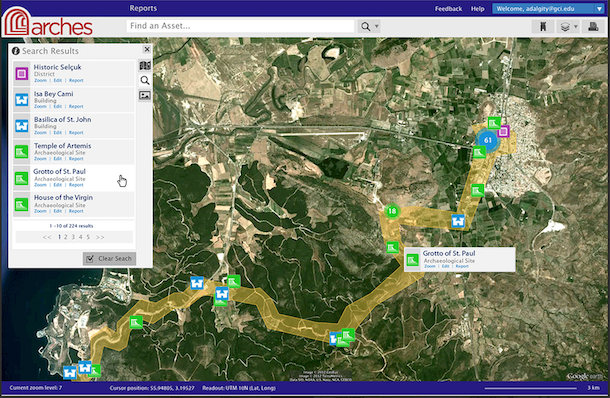 This map of Seljuk’s historic sites is a sample image from the Getty Conservation Institute’s Arches, an innovative open-source cultural heritage data management platform, launched at Claridge’s in London yesterday by directors of the J. Paul Getty Trust. The Trust also announced a $5million endowment grant to the Courtauld Institute of Art for its conservation programmes, and updated news on other projects.

Developed in collaboration with the World Monuments Fund, Arches allows anyone to inventory and manage any heritage site in the world. The Endangered Archaeology in the Middle East and North Africa (EAMENA) project based at Oxford University is using Arches to record archaeological sites and landscapes across 20 country regions. As an example of how easily the programme can be found and used, Tim Whalen of the Getty Conservation Institute said that he had been been gratified to find details of an historic site in the Philippines just added to the programme without Getty’s knowledge. A further project built with Arches is Arcade (Access Resource for Conservation and Archaeology in a Development Environment) a publicly accessible data base to the cultural heritagge of the City of Lincoln in England.

The Trust is the world’s largest cultural and philanthropic organisation devoted to the visual arts, and it has long supported and practised conservation, providing funds and expertise for endangered heritage sites as well as important 20th-century buildings. The Courtauld is the only educational establishment to offer a three-year masters degree in wall painting conservation, which has been connected to Getty since its inception in 1985, and its students and graduates have worked and taught around the world. Pictutred above is conservator Sam Whittaker addressing the wall paintings in the Monastery of Agios Ioannis Lampadistis, Kalopanagiotis, Cyprus. (picture courtesy of The Courtauld Institute of Art)

Tim Potts, director of the J. Paul Getty Museum, gave a résumé of forthcoming exhibitions in 'The Classical World in Context’ series. Getty Villa in California houses Getty's Greek and Roman collection, and because it has no artefacts from any other part of the ancient world, these exhibitions borrow works to show its own collection in perspective. On now until May 27 is Palmyra: Loss & Remembrance. Assyria and Mesopotamia are to follow.