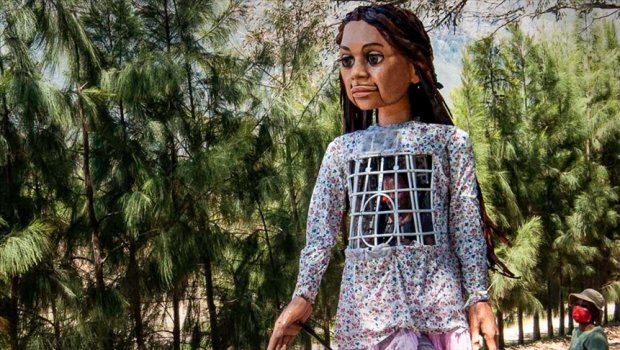 Seeing a 3.5 meter tall puppet of a little girl, making her way down the street, or out of the window of a car on the way to work, would certainly turn heads. Thus is the goal of Joe Murphy and Joe Robertson. Created by the minds of the Good Chance Theater and the hands of the Handspring Puppet company, this larger than life little girl will walk  8000 kilometers across Turkey, Greece, Italy, France, Switzerland, Germany, Belgium and the UK to raise awareness and tell the story of refugees.

This puppet, operated by her creators, the members of the Handspring Puppet Company operate her from inside her structure, standing on stilts and using a mesh window to see through.

Little Amal’s Character originates from a play produced by the Good Chance Theater entitled The Jungle. This play featured a character under the same name. The critically acclaimed play was originally performed in the theater of hope in 2015 in the Calais refugee camp. The character of Little Amal was designed to give representation to all of the unaccompanied children staying at the camp at the time of the performance.

The play saw a lot of success in contributing towards the international conversation surrounding refugees and humanity as a whole. The play creators Joe Murphy and Joe Robertson, felt that Little Amal’s character had a bigger potential and thus created her larger than life form. She represents those who have also traveled great distances in the hopes of affording themselves a better life with more opportunities.

Little Amal's epic has become an extraordinary expedition. Animated as a massive puppet crafted by War Horse makers Handspring Puppet Company, we accompany her on this voyage.

From Gaziantep, near the Turkey-Syria border, to Manchester, England, she will shed light on the tales of the multitudes of children refugees who have been uprooted.

Handspring Puppet Company was established in 1981 in Cape Town, South Africa, by Artistic Director Adrian Kohler and Executive Producer Basil Jones, and has flourished under their direction for 40 years.

Artists and NGOs organizing public cultural and art events will visit settlements along the Walk's itinerary between July 27 and November 3.

The voyage, according to the project's art director, Amir Nizar Zuabi, is a sort of traveling cultural festival. For more information visit Little Amal's page.