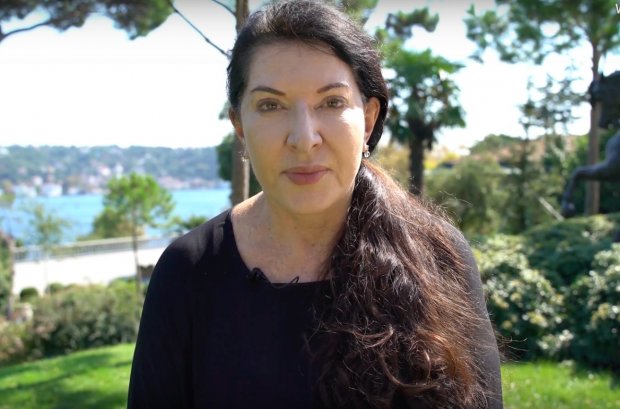 Marina Abramović is one of the world’s most famous living artists. Her iconic 2010 retrospective at MoMA in New York, The Artist Is Present, is perhaps one of the best-known exhibitions of the past decade; one of very few that can be said to achieve such a level of fame. Indeed it’s hard to think of a more influential exhibition, one that fixed the role of what “the artist” represents more clearly in the public imaginary. The exhibition’s centrepiece was Abramović, dressed in her trademark long black cassocks and with her long black hair, sitting at a simple wooden table opposite members of the public, staring into their eyes. Three years later, Abramović, would dance with the rap artist Jay-Z and other members of the art world in the video of Picasso Baby, filmed at Pace Gallery in New York and directly inspired by the MoMA show. Abramović had come to represent a very particular nexus of art, music and celebrity culture.

Ten years later and the Sakıp Sabancı Museum plays host to Abramović’s work in a magisterial exhibition, a testament to the Serbian artists’ long influence and legacy. The show, Flux/Akiş, begins with works from Abramović’s early years, including oil paintings, and presents videos of some of her most iconic performances. This introduction serves to reposition the artist’s work, to remind the visitor of how groundbreaking her performances were in their early years and indeed how much performance art was shaped by her work.

One of Ambrović’s best known works is shown early in the show, Rhythm 0 (1974). In it, the artist lies still, in front of a table of 72 objects, including a gun, knives, flowers and grapes. The audience is able to do anything they want to her with these objects, and they did. Abramović recalls how things began tamely before escalating – her clothes were cut up, the gun waved in her face. Finally, after six hours, as planned, she stood up, only for the audience to run away, “to escape an actual confrontation”. The work remains as shocking today as it was then.

One room is dedicated to Abramović’s relationship to Ulay, another performance artist, a partner in life and work. Their works engage directly with their relationship, in one, Rest Energy, 1980, she holds the arc of a bow while he holds the string, an arrow pointed at her heart. Microphones attached to their chests record the beating of their hearts. In another, The Lovers (1988) perhaps their most famous collaboration, they walked the length of the Great Wall of China, meeting to say farewell and walking away from each other at the end of their relationship. Ulay, a respected performance artist in his own right, passed away this year at the beginning of March.

The lower floors of the exhibition leave behind video. The second section of the show brings together contemporary artists from Turkey working in performance. The third section, titled Method, presents an unique experience developed by Abramović, in which the visitor is guided through a series of actions and performative experiences such as staring at a wall of colour, or counting grains of rice. In one section, echoing Abramović’s famous New York show, the visitor is sits across from a stranger, staring into their eyes.

That Flux/Akiş has closed, like all of the museums in Turkey and beyond, as a response to the Covid-19 pandemic, lends a bittersweet quality to the show. The exhibition reminds us that Abramović is rightly regarded as one of the great pioneers of performance art, and yet her work speaks directly to a sense of interpersonal intimacy. In a moment in which social distancing has become a new way of life, Abramović’s work speaks volumes about the importance of our interactions with each other. We hope the present crisis will pass in time for the show’s reopening.