Farewll to the inspirational founder of The World of Interiors 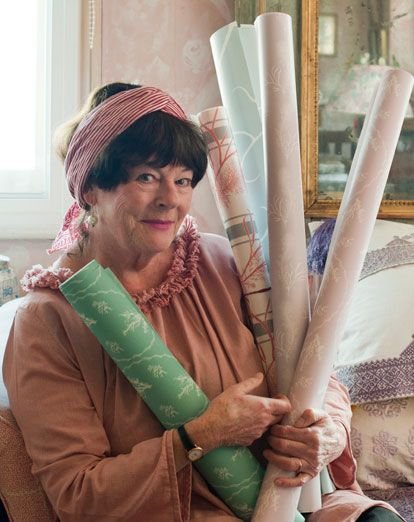 So soon after Norman Stone, it is heart-breaking to learn that another much-loved contributor to Corncuopia has just died. Min Hogg was the founding editor of the most beautiful magazine in the world and a huge inspiration to many.

The Times published a fine obituary this week for the 'flamboyant yet exacting founding editor of The World of Interiors who epitomised “shabby chic”, the term she invented.' 'Independent of mind, vivacious and with a peppery wit, Hogg dreamt up the magazine, which soon became a bible for those interested in interiors'. Decreeing that it should feature everything of merit from “a palace to a pigsty”, 'there were Swedish Gustavian manors and Irish stately homes, but also a derelict stable reworked by a squatter, a council house and caravans. She made a point of championing owners, not professional designers, and shunned market research, preferring to rely on her taste.'

The World of Interiors (WOI) was inspirational for Cornucopia. Eschewing 'done-up places' for places with real romance, its was full of the 'genius loci', a love of light and colour, mood and temperature, a glimpse of a landscape here, of a kilim there. Here was something that knocked the superficial world of glossy magazines for six, the perfect marriage of the visual and the literary. And it made the notion of publishing a magazine about Turkey exciting. So when it came to launching Cornucopia in 1991, Berrin and I looked no further than the small print in Interiors, or WOI as it became known. First a call to Tony Austen of Argent Colour, the London East End repro house, then to the printers, St Ives (or Chase as they then), where I suspect we used up the leftover paper stock from the latest Interiors. It goes without saying that the great photographers Fritz von der Schulenburg, Simon Upton, James Mortimer and Christopher Simon Sykes all found their perfect editor and milieu in WOI, and would all generously contribute. And then, happiness of happinesses, we had Min herself agreed to write after she handed the reins of Interiors over to the excellent Rupert Thomas, a Courtauld man who understood the spirit of the magazine entirely and continues to bring out unquestionably the most beautiful journal in the world.

Always chic, always entertaining, and extraordinarily kind and generous with it, the beturbaned Min not only a wonderful eye, but a magnificent ability to write and was a superb editor: 'Cut to the chase,' she would urge, passing a red line over the first four paragraphs of an article. For Cornucopia she wrote accounts of her travels in Turkey and the Caucasus.

September 12, 2001 was not a date anybody would have chosen to be jetting off to Georgia. Even to ardent travelling members of the National Art Collections Fund UK and our hosts, Specialtours, it felt odd, rash even, especially considering how many of our geographically wobbly friends and families were leaping to the conclusion that Georgia, which is in the Caucasus, is a fundamentally Islamic country on the doorstep of Afghanistan. Wrong. Georgia straddles that neck of land separating the Black Sea from the Caspian and became largely Christian long before anywhere in western Europe. It seized independence from the Soviet Union in 1991, but Russia was only the last in a string of conquerors to have overrun the land in the past 3,000 years. In spite of it all, the Georgians display an indomitable national character – they all descend from Noah – and have their very own squiggly alphabet, language and currency.

As is de rigueur on organised tours, we have a sleepless night before embarking on our first day in Tbilisi (ex Tiflis), Georgia’s capital, and it does not augur well that the State Museum and the Museum of Fine Art are both shut, out of respect for the bombing of New York’s twin towers. We drive on through parts of old Tbilisi.

At once I am so entranced by the buildings that the museums, with their oodles of gold, quite lose their allure. I only want to leap from the bus and explore on foot. Tantalising cobbled streets rise away from the River Metekhi, with wooden houses in pinks, greens, yellows and blues, all beautifully peeling and with deep, colonnaded verandahs and lacy wooden canopies shaded by vines and wisterias, each one more captivating than the last. The two-edged sword of restoration is yet to come.There are glimpses through massive plane trees bordering the river of similar buildings on the clifftop opposite.

Our bus speeds on to the thirteenth-century Metekhi church. Balanced on a high rock above the town, it is the oldest in Tbilisi. An unusually merry priest chatting outside in the porch leaves us unprepared for the unusually handsome corpse in an open coffin within. Women surrounding the rose-strewn catafalque are impeccably dressed in black lace or chiffon, with visibly teamed underwear. We carry on regardless as the funeral service begins.

Since the majority of Georgian churches are, like mosques, domed, it is sensible to learn the meaning of the architectural term “squinch”. These are the fan-shaped devices by which a dome connects in an aesthetically pleasing way with its supporting columns. Think of half a melon (the dome) raised up on four pillars of cucumber. Where they meet, the join will look uncomfortable. But add squinches to the top of each column and, hey presto, you have architectural serenity. Once you are aware of this, a squinch becomes the very first thing you look out for in a domed building.

The restaurant where we are to eat has a crazily paved path leading up to it, made from a million blue and white ceramic shards. It feels like walking on an elaborately iced cake. Here we are introduced to a Georgian light lunch of eight starters, soup, three main courses and dessert. Also to my absolutely favourite thing: Georgian bread. Baked in round clay ovens, the long, pointy loaves are slapped onto the inner oven wall to cook and come out gondola-shaped, all golden-crusted, with moist white crumb.
At the food market we buy green figs so ripe and chin-drippingly juicy that they have to be eaten there and then. Beautiful country wives, with strong arms and bronze skins, flash their eyes over mounds of white cheeses, each sculpted on the surface by the weave of the basket in which they have been made.

Without Interiors, Cornucopia would never have happened. And it was probably Min's later missives that kept us going in the post-issue doldrums. Never once did an issue  land on her doorstep without an email arriving. One, headed 'whooopeee': ran: 'So that’s the afternoon taken care of. Congratulations to Berrin that master of the slanting light (inc in ads) too'. After No 58, she wrote: Super afternoon wallowing in every word of issue 58. Discovering the extraordinary Armin Vambery, admiring Jason’s finesse in reviewing, and drooling over the beauty of art and objects up front. Then remembering the day I failed to put film in my camera at Ishak Pasha, good lunches at Pandeli and how much I am longing to get to the BM Assyrians. I shall miss the lady leaving her lake, but I am sure Cornucopia will always be a feast.

Dear Min, a feast without friends is simply not the same. You will be sorely missed.