Our strange present and near future

Emre Hüner and his Cratered Glazes at Arter 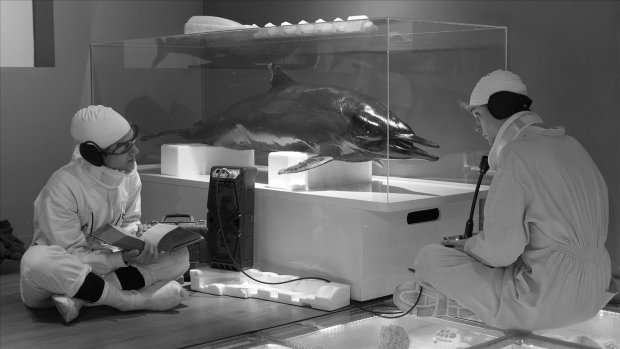 The artist Emre Hüner began working on his show at Arter [ELEKTROİZOLASYON]: Exo-Settlement Recorded on Cratered Glazes in 2019, before the Covid-19 pandemic, and when the museum itself was not yet completed. His practice began with small, exquisitely produced works on paper, but once confronted by the vast space Arter’s head curator Emre Baykal envisaged for the show, it rapidly began to expand. The resulting exhibition, curated by Aslı Seven, presents the visitor with a complex and immersive world, an archaeological excavation of our strange present and near future.

The exhibition is structured around a central videowork, which evolved from a screenplay written by Hüner. The video takes place in and around the museum, at once a fiction and a documentary which, as it was filmed, gradually absorbed the world around it. ‘Everything that was happening around us gradually infiltrated into the scene,’ Huner remarks. ‘At some point nobody knew if the camera was filming or not. Everything seemed part of the fiction at some point.’

So, a scene filmed in Arter’s long-running Altan Gurman show took on a life of its own when, as an actor sits in front of a work of a telephone, his phone begins to ring. Or as the streetlife around a boat in the Haliç shipyards gradually made its way into the film. Other connections were more deliberate. While the museum itself, and the many floors and office spaces that are usually hidden from view, served as a setting for many scenes, as did a Arçelik washing machine factory, located in the suburbs of Istanbul. There the actors are replaced by the ballet of the factory’s vast machines, again allowing Hüner’s film to sit somewhere between documentary and fiction.

Countless objects spill out around the monitor, many of which also feature in the video work itself. The effect contributes to the sense of an archaeological dig or crime scene, with the visitor cast suddenly in the role of piecing together these artefacts of an unknown narrative. Images, screen prints, sculptures and texts are gathered together, evoking in their encyclopaedic complexity the sense of an antique Wunderkammer.

The objects themselves feel unstable in their meanings. Strange, seemingly synthetic 3D printed sculptures, it emerges, are not speculatively designed but rather the renderings of the brains of fishes found in the Natural Science Museum of Saint Joseph Lycée in Kadıköy. Alongside these ‘natural’ sculptures are ceramics, with the ‘cratered glazes’ of the exhibition’s title, hung on metal tubes, which give the works quasi-animalistic shape. Time and again we find ourselves between the natural and the synthetic, confronted by objects that document the process and context of their own making – what Hüner has called a ‘semiotic machine’.

The largest object in the exhibition is an isolated wave breaker, which speaks to this line between the natural and synthetic. In order to work, a wave breaker – by definition a manmade design built to withstand the ravages of nature – needs to be woven into a vast fabric of identical objects.

‘The thing is,’ says Hüner, ‘these sculptures don’t work on their own – they only work if you pour 300 of them. Otherwise it’s nothing, just a single thing that stands there and will be washed away. They need to be bonded together, just as in nano-technology you need to form fabrics of tens of thousands of repeating cell structures.’ The object was first shown by Hüner in an exhibition back in 2009, and as so often in the artist’s work gains a certain character, one that sits uneasily with regard to the visitor.

At the beginning of the exhibition a small drawing of a blasted landscape with a man climbing mountains of wave breakers gives us a window into a possible fiction behind this monolith. Gradually, as we make our way around and through the exhibition, each object begins to accrue a fictional context, and a world begins to emerge from it. As we look out on a future of post-Covid ‘normalisation’, it is perhaps apposite to consider what shards of our recent past we choose to take from the junkyard of the present, and what stories we will tell about them as we make our way inexorably into the future.