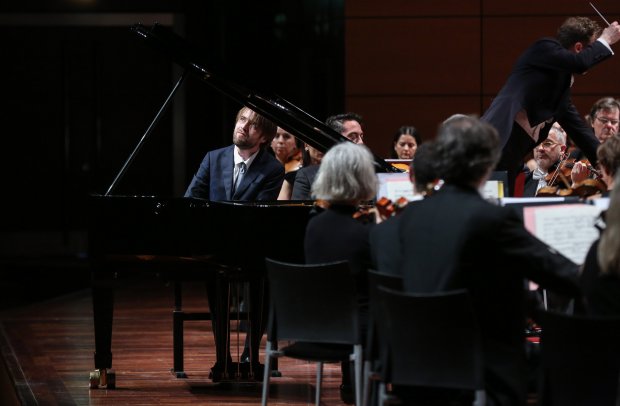 Well, now. Your reviewer is still reeling from the pianist’s performance at the concert on Sunday night (Filarmonica della Scala and Daniil Trifonov at the Lütfi Kırdar Concert Hall, May 27) – the third event he attended during the 46th İKSV İstanbul Music Festival. Will he recover in time to write a mature, sensible, balanced review? We shall see.

It must be said that the programme for this concert was unusual, to say the least. It began with Rossini’s ‘Barber of Seville’ Overture, and this was followed by Prokofiev’s Piano Concerto No. 3 in C major. The second half consisted of Beethoven’s Third Symphony, the ‘Eroica’, whose dedication to Napoleon was famously cancelled. (The encore was Rossini’s ‘William Tell’ Overture, but this was only to be expected from an Italian orchestra, albeit one conducted by a Brit: Mr Daniel Harding, though born in Oxford, apparently studied trumpet at Chetham’s School of Music in Manchester before beginning his career as a conductor.) From Prokofiev back to Napoleon? Hmm. Frankly, I would have expected the Prokofiev to be the last item on the programme. But no – that honour went to Beethoven. One has to admit, however, that after Daniil Trifonov’s astonishing virtuosity in the first half, only Beethoven could have had sufficient weight to be placed in the other pan of the scales.

Gioachino Rossini (whose father, like Mr Harding, was a trumpeter) had the reputation of being so good a melodist that if the manuscript paper fell off his desk while he was composing, rather than pick it up off the floor he would start the piece all over again with a brand new tune, seeming to pull them effortlessly out of the air. (Maybe the real reason, though, was that his huge girth was a discouragement to stooping.) In the ‘Barber of Seville’ Overture, our Italian visitors did not disappoint in the exuberance department. One feature of the Filarmonica della Scala Orchestra is the excellence of their wind section; their oboist, in particular, is one of the finest I have ever heard.

Having listened to Daniil Trifonov on YouTube and read the rapturous reviews, I may be forgiven for wondering whether the reality would live up to the ‘Much have I travelled in the realms of gold, but this was something else’-style blurbs. It did. The first impression is one of disbelief that he can actually perform in the position his body adopts at the piano. He hunches over the instrument, and the joints of his extra-long fingers bend upwards rather than downwards as he strokes the keyboard. But this seeming double-jointedness is a characteristic he shares with the late Vladimir Horowitz, so he is in good company. Here is a YouTube video with some close-ups of Trifonov’s hands in motion:

Apparently, Sergei Prokofiev – no mean pianist himself – found this concerto a hard nut to crack. He had long arms, however, and this must have helped when it came to the hand-crossing bits – left hand leaping up to the top of the piano, right hand stretching over (or under) it to the bottom, then both hands moving back in a flash. Woe betide any male performer unwise enough to wear cufflinks with sharp corners: you could cut yourself quite badly during the crossovers. The concerto’s first performance in the United States, whither Prokofiev had moved from Russia, took place in Chicago in December 1921 with the composer at the piano. As regards the nature of the work, I bow to the judgement of Jean-Efflam Bavouzet, who incidentally is one of the foremost interpreters of Debussy and Ravel of our times. Here is his account. Monsieur Bavouzet mentions the occasional flashes of Messiaen in the second movement (which is a series of variations), and the ‘freezing temperature’ in the fourth variation; it is quite true that there is a brittle, glassy quality – like light refracted through a prism – to Prokofiev’s music here, putting one in mind of the ability of Messiaen’s linnets and orioles to ‘rinse and wring the ear’ like the thrush in Gerard Manley Hopkins’s poem ‘Spring’.
Daniil Trifonov does not just jerk his body around while playing: he also sways to the orchestra’s beat while waiting for his entries. But I do not wish to focus solely on his eccentricities: I have the deepest respect for his musicianship. Here is a video of him playing Chopin’s Etude No. 6 in E flat minor – much slower than the metronome marking Chopin gave, and rightly so – with a subdued intensity I have yet to hear equalled:
There is ample justification for the statement by Martha Argerich that ‘What he does with his hands is technically incredible’: here, Trifonov is playing Bach’s Prelude and Fugue in G sharp minor (BWV 863), and in bars 32 and 33 of the fugue he succeeds in bringing out an entry in the tenor part that is so close to the alto that at one point the two are only a semitone apart. You really need two separate hands to play this with the correct emphasis on the lower of the two parts, but Bach only allows you two fingers of the same hand. No problem for Mr Trifonov (the tenor entry starts on the stroke of 4.49):
Towards the end of the Prokofiev concerto the composer requires the pianist to play two neighbouring notes with the same finger – and not only that, but during a bravura passage of extreme difficulty. I watched with baited breath as the soloist achieved the ‘technically impossible’ leaps and hand-crossings. For granting me the privilege of witnessing this I must express my gratitude to Ms Derya Bozcuk of the İstanbul Kültür ve Sanat Vakfı, who most thoughtfully provided me with a seat from which I could clearly see the pianist’s hands.

And so to the Beethoven. In the birth chart of the composer that I have seen, his ascendant is placed in the sign of Taurus, with the planet Uranus close by. (Who else but someone with a powerful Taurean influence could have composed the Pastoral Symphony, with its evocation of bucolic scenes?) Only a short time ago, on May 15, in fact, Uranus moved from Aries into Taurus; considering the fact that this planet changes signs only every seven or eight years, it is entirely understandable that the entry of Uranus into Taurus should be the current hot topic in astrological circles.

Uranus is the bringer of innovation – revolution, even – and it is high time we stopped thinking of Beethoven as ‘old hat’ and perceived him to be the iconoclast he was actually seen as during his lifetime. Beethoven’s third symphony was a game-changer in several ways: the first movement, extremely long by the standards of the day, is marked by savage, unresolved dissonances and offbeat rhythmic complexities that must have rocked his audiences’ socks off. And this is not to mention the movement’s almost brutal dramatic qualities: it unfolds like an early-19th-century action movie. (As an aside, Prokofiev, too, was quite a leftie: after the overthrow of the Tsar in February 1917 he joined the crowds celebrating in the streets of Petrograd. It was, in fact, later that same year that he began work on his third piano concerto.)

In the second movement of the ‘Eroica’ Symphony (the famous ‘dead march’), although there were yet again some exquisite oboe solos, it was the string section that shone, demonstrating an ability to bring their pianissimo down to a mere whisper. No doubt this is one advantage that long experience in the matter of accompanying opera singers brings: you learn how to play quietly enough to let the soprano on the stage be heard as she warbles out her dying breath.

The third movement, a scherzo in three-four time, has some neat choruses for the French horns (horn choruses, not dawn choruses). I looked forward to them with eager anticipation: would the first horn get up to those cruel high notes, higher than anything previous composers had dared ask for? But these Waterloos for wimps with insufficiently developed lip muscles were managed with no fuss: indeed, the whole of the brass section gave us some beautiful ensemble playing in this movement.

I have not yet praised the percussionists, whose timing in both the Prokofiev and the Beethoven was impeccable. The fourth and last movement of the ‘Eroica’ concludes with clashing cymbals, and the same is true of Rossini’s ‘William Tell’ Overture, played as an encore. After this double lashing of joie de vivre the audience was jubilant, and Mr Harding and his orchestra were given a rousing, con brio send-off.

For me, this concert was an opportunity to compare the performances of the Turkish-based orchestras I had recently heard (Borusan and Tekfen) with that of a well-established European outfit in the shape of the Filarmonica della Scala – and to conclude with satisfaction that the gap has narrowed to a sliver. But it was Daniil Trifonov’s playing that formed my lasting impression of the evening. If I may return to the poem by Keats that I quoted earlier (‘On First Looking into Chapman’s Homer’):

Then felt I like some watcher of the skies
When a new planet swims into his ken ...

Like Cortez’s men staring out over the Pacific for the first time, I was aware that something new and unusual was afoot – Uranus, planet of all forms of mental abnormality (one of which is genius) had paid a call:

... and all his men
Look’d at each other with a wild surmise –
Silent, upon a peak in Darien.

Trifonov’s performance left me thunderstruck, as if I had been grolloped over the cranium by Cortez’s blunderbuss.