‘The Gentleman of Istanbul’ and other sly tales

And that, as the great novelist said, is what great art is about.

Minimalism is the key to Turhan Selçuk’s art – his drawings all bold black lines and harsh angles. However, as is so often the case with the best artists, simplicity can be deceptive. His torpedo passing through a shoal of fish is a remarkable piece of art. He conveys so much with just the expressions in the eyes of a few bullet-shaped fish.

Satirical and political cartoons have been around almost as long as printing – longer if you count the crude caricatures daubed on the walls of ancient cities. Making fun of the powerful, the corrupt and the untouchable is something universal, timeless and important. A perfectly composed cartoon can capture the feeling of a political moment in a way that nothing else can. A picture is worth a thousand think pieces. Turhan Selçuk was a master of the form, and a retrospective of his work is currently showing at Yapı Kredi Kültür Sanat, on İstiklal Street (https://www.cornucopia.net/events/turhan-selcuk-retrospective/). It is well worth a visit.

Turkey has a long history of satirical art. Though the Ottoman sultans banned the drawing of caricatures, that didn’t stop Yusuf Franko skewering politicians and society figures in private. And today there isn’t a newsstand in Istanbul that doesn’t carry range of cartoon magazines. Selçuk was one of the founders of Turkish cartooning. Born in Muğla in 1922, he published his first work in the sports magazine Şut while still in middle school. From then on he dedicated his life to cartooning and was published in humour magazines such as Akbaba and Tasvir, newspapers such as Yeni Istanbul and Milliyet and in the Italian humour magazine Il Travaso. He was also founded two magazines of his own, and produced a variety of collections and graphic novels in a career that continued into the 2000s, just before his death. The exhibition displays work from all the major periods of his life. 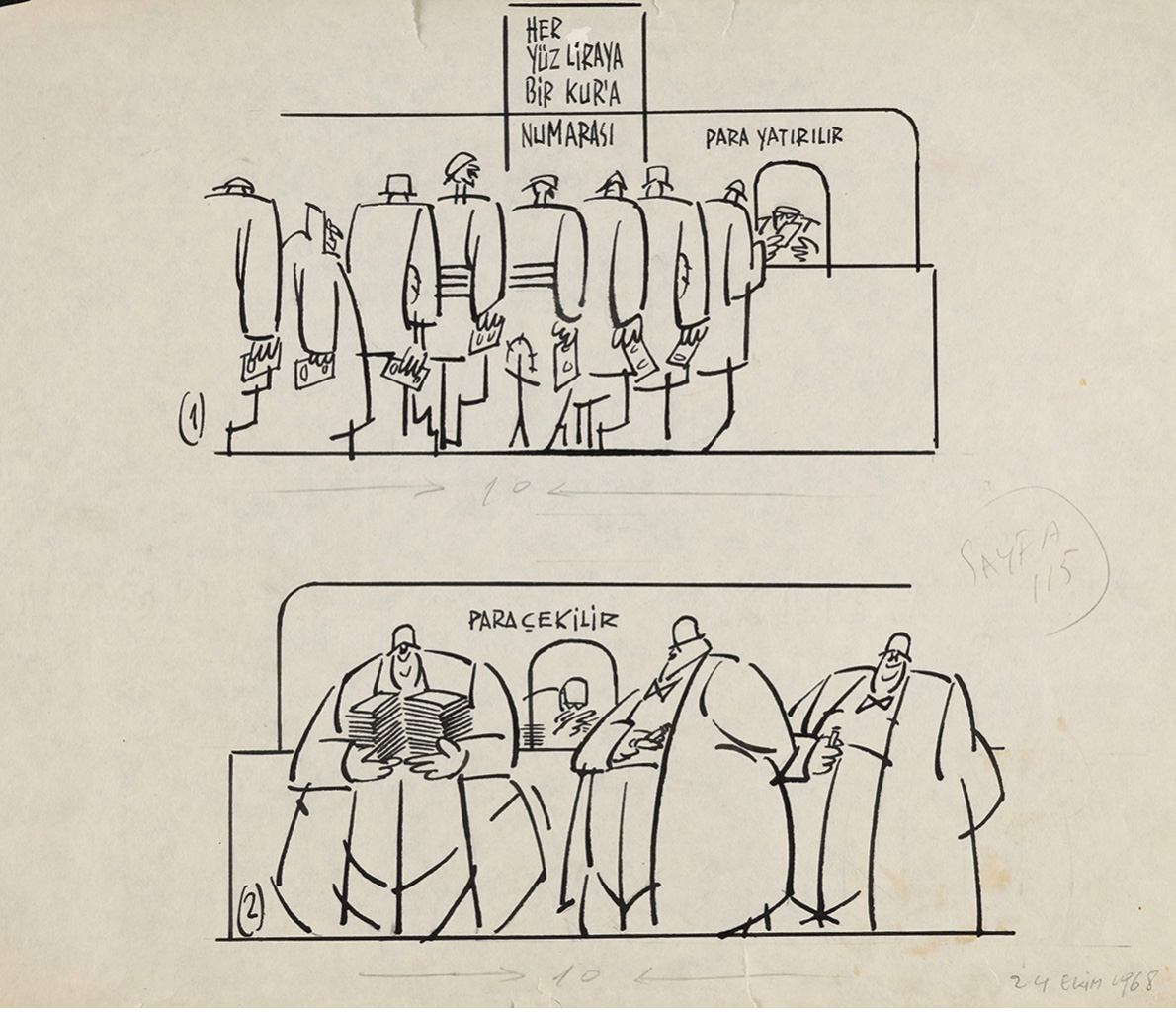 Selçuk enjoyed playing with symmetry and found great humour there, both in physical comedy and symmetry as metaphor. In one cartoon, two men climb opposite mountains, but realise they are stuck because the rope tying them together has become taut as they get closer to the top and further apart. In another (above), workers line up to pay money into a lottery, while on the other side of the booth rich men wait to withdraw it. 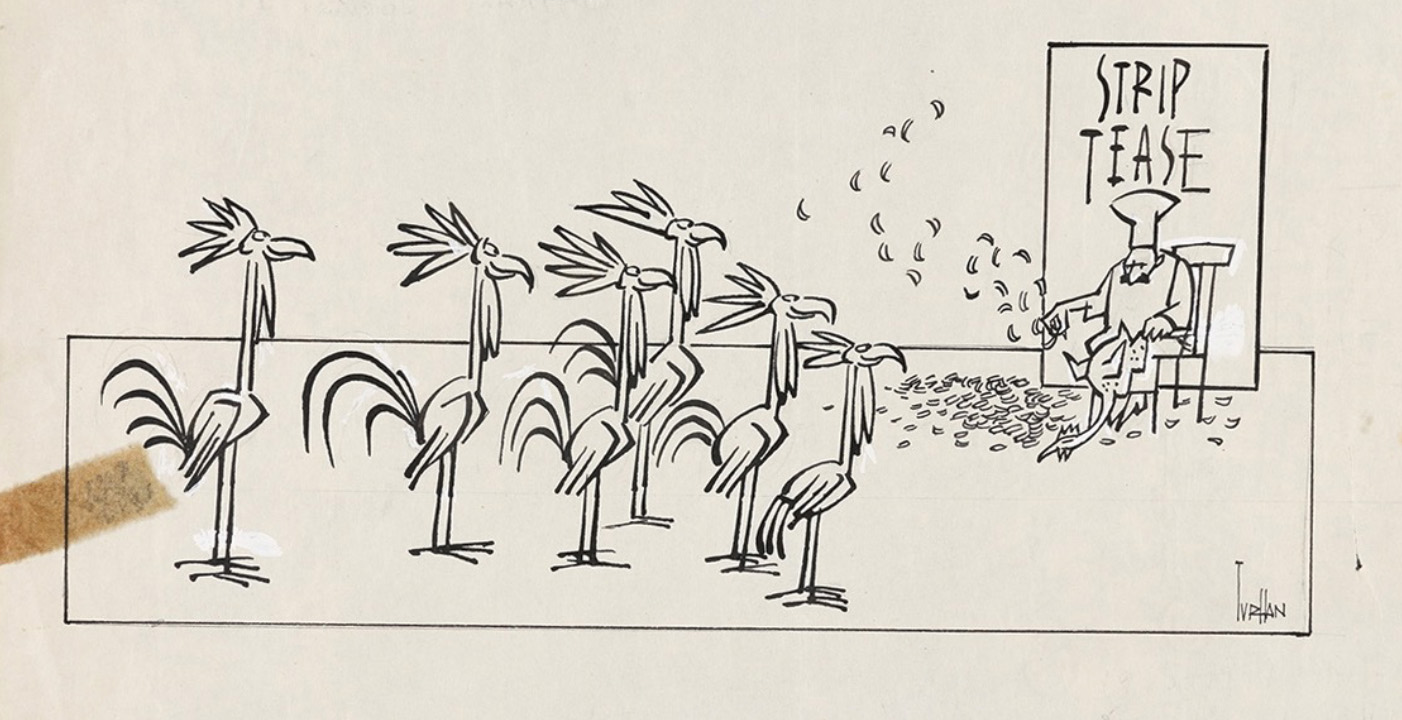 His humour perfectly mirrors his style: stripped down, but devastatingly effective. A chef plucking a chicken in front of a sign that says ‘strip tease’, watched by leering cockerels, is hilarious, though not subtle. Some cartoons, however, take longer to work out or even a second viewing. In one, a skeleton lies in a maze, holding onto a sign saying İnsan Hakları (human rights). It takes time for the viewer to notice that the maze is constructed of swastikas. 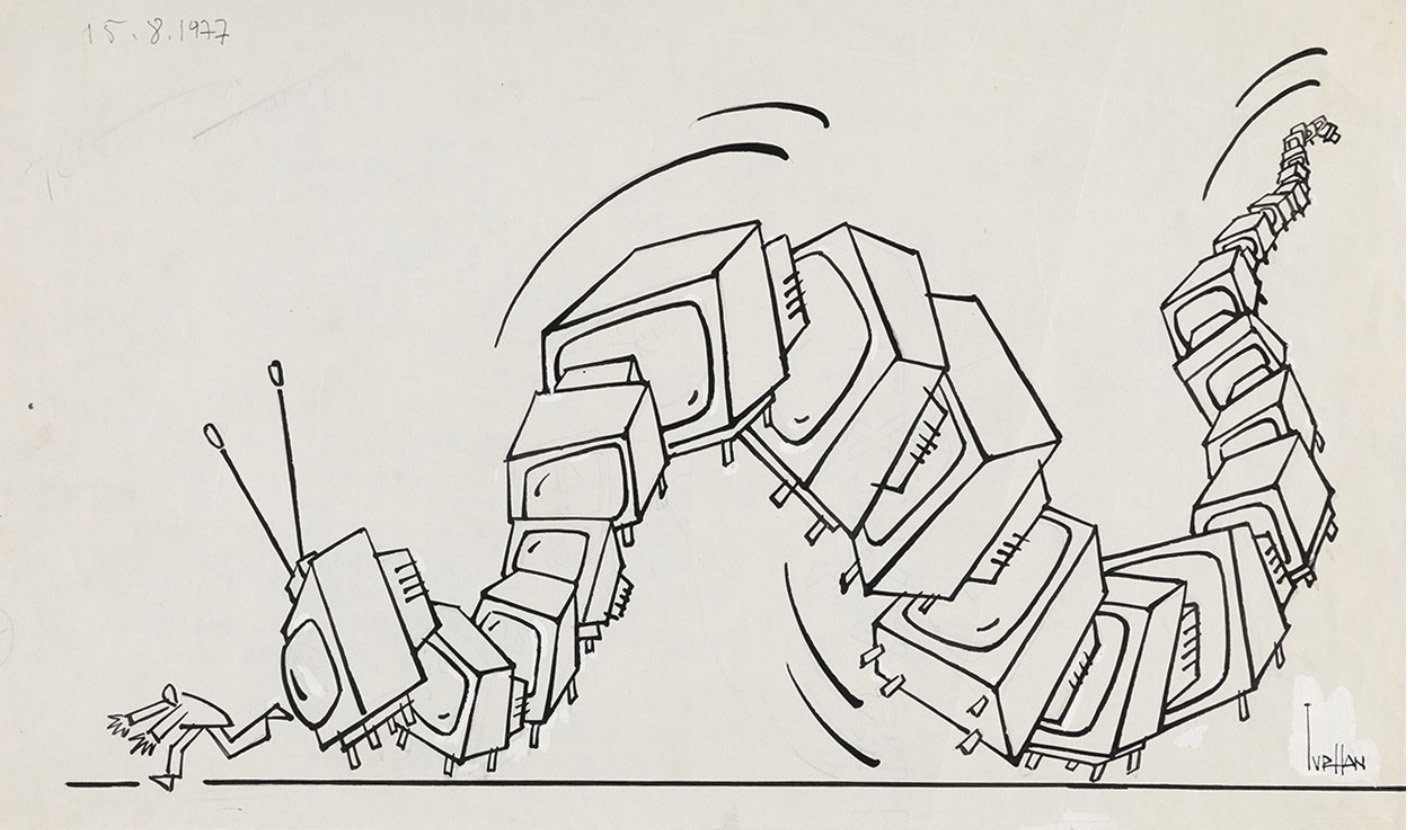 Although not exclusively so, his work is political. Sometimes he goes for issues that would originally have been topical but can be hard to follow today. I didn’t get the allusions to the troubles in Cyprus until I took a second look through some of his images. That said, the vast majority of his work is universal: a man marching out into the street to avoid a bookshop, or being pursued by a monster made of screens, could just as well have been printed last week as in the 1960s.

Beyond the satirical work, Selçuk designed cover art for his wife the novelist and short-story writer Füruzan, translations of Voltaire and – most notably for Turkish literary buffs – for Yaşar Kemal. Sadly, they seem to be unavailable for newer editions of Yaşar Kemal’s books. 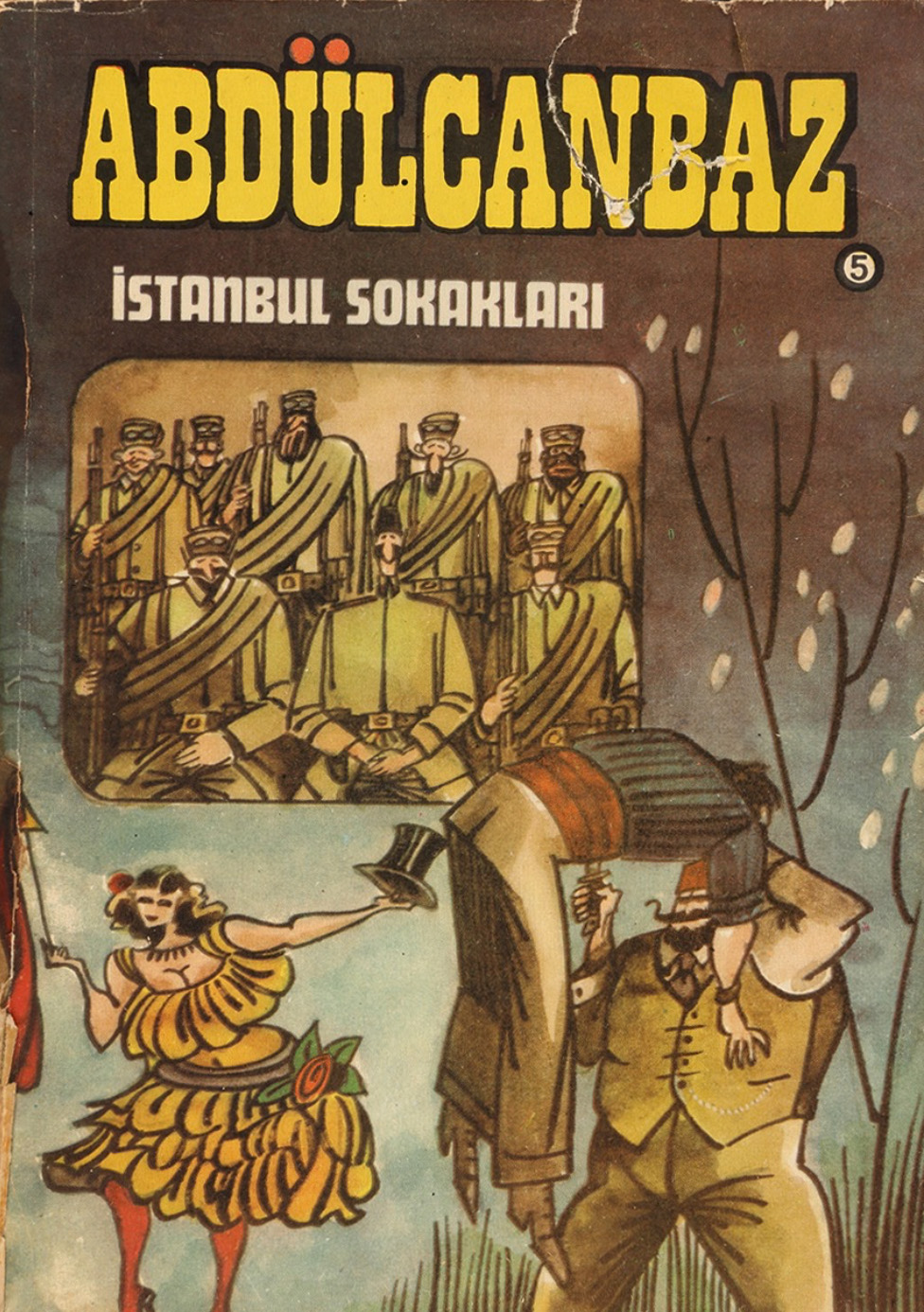 The last section of Turhan’s work on display at Yapı Kredi Kültür Sanat shows segments and character studies from his graphic novel series, Abdülcanbaz the Formidable Turk. It is like a post-modern Tintin, complete with cartoon violence and scantily clad women. Selçuk seemed to have no limits on where or when the stories took place. Though ostensibly set in the early Republic of Turkey, Abdülcanbaz’s almost 30 years of adventuring take him to the Ottoman Empire, the Wild West, outer space and – Jules Verne style – the centre of the earth, to name but a few scenarios. As Abdülcanbaz The Gentleman of Istanbul battles with the nefarious politician-come-businessman Sami the Specks, he forms alliances and rivalries with a range of historical and literary characters, from Al Capone and Tarzan to the 17th-century Ottoman traveller Evliya Çelebi and French gentleman thief Arsène Lupin. 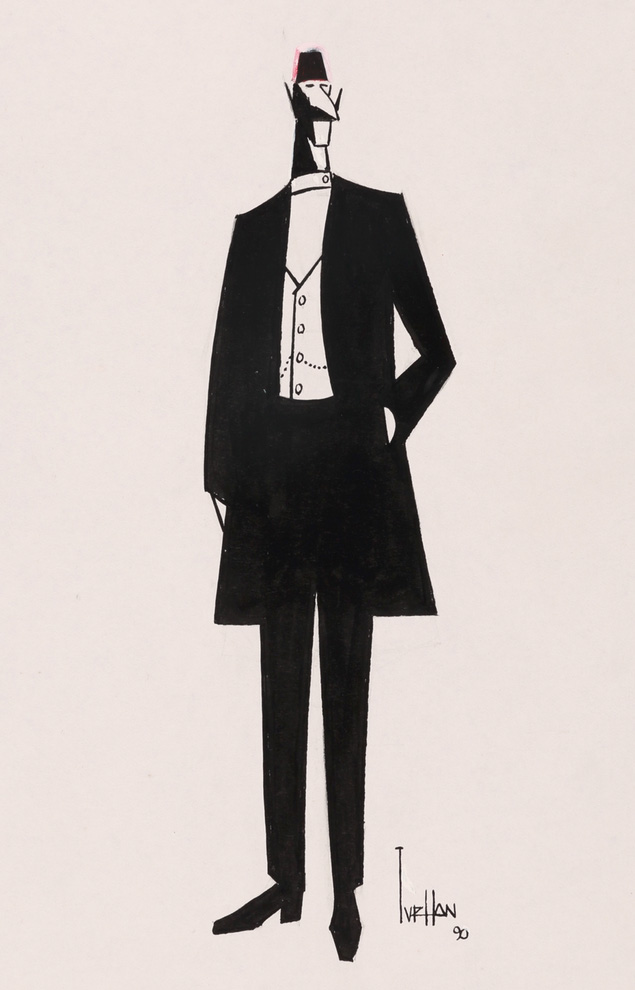 As with his satirical work, the characters populating Abdülcanbaz’s world are angular and exaggerated, like nothing you see in the worlds of American, European or Japanese comics.

It is always fascinating to see a graphic novelist’s original sketches and frames, and this bizarre and fantastic comic is no exception.Turhan Selçuk’s work is cheeky, sly and sometimes just hilarious. If you haven’t burst out laughing in an art gallery for a while, you might find this a good opportunity.

Luke Frostick is an English writer based in istanbul. He is also the editor of The Bosphorus Review of Books.