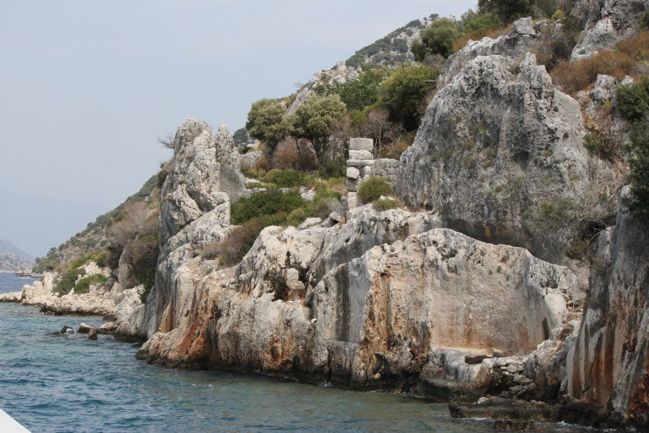 The Kekova region, located on Turkey's western Mediterranean coastline, encompasses the island of Kekova, the villages of Kaleköy and Üçağız, and the four ancient towns of Simena, Aperlae, Dolchiste and Teimioussa. It was declared a Specially Protected Area in 1990 to protect its ‘natural, cultural and geographic richness’. The Kekova island – maybe because of its beauty and location – was fought over by the Italians, who occupied nearby Castelorizo, and the Turks in the early 20th century (it eventually went to Turkey in 1935). On the northern side of the island are the partly sunken ancient ruins of Dolchiste/Dolikisthe, destroyed by an earthquake in the 2nd century. Although it was rebuilt and flourished during Byzantine times, the Arab threat meant that it was eventually abandoned. The village of Kaleköy (ancient: Simena) is accessible only by boat, and its beauty and charm hit you as you approach. Floating restaurants adorned with brightly coloured flowers, terracotta-roofed houses, stone dwellings and a quaint little harbour paint a most picturesque scene. A well-preserved castle built by the Knights of Rhodes partially upon Lycian foundations dominates the top of the village. The village of Üçağız (ancient name: Teimioussa) is one km from Kaleköy, north of a small bay by the same name, with the ruins of Teimioussa to the east. The name ‘Üçağız’ means ‘three mouths’, referring to the three exits to open sea.

The nearest airport is Dalaman which is 185 km away (2 hours and 50 minutes by car). It is not possible to stay in every part of Kekova (for instance, the Kekova island is uninhabited and only able to be seen from boat) but rooms in modest pensions can be rented in Kaleköy and Üçağız.

If you are staying in Kekova, hiring a car is the best option as there are many sights to explore in the 260km2 region. The Kekova island and Kaleköy are accessibly by boat, and many people stay in nearby Kaş and make day trips. Canoeing is highly recommended around the sunken city.