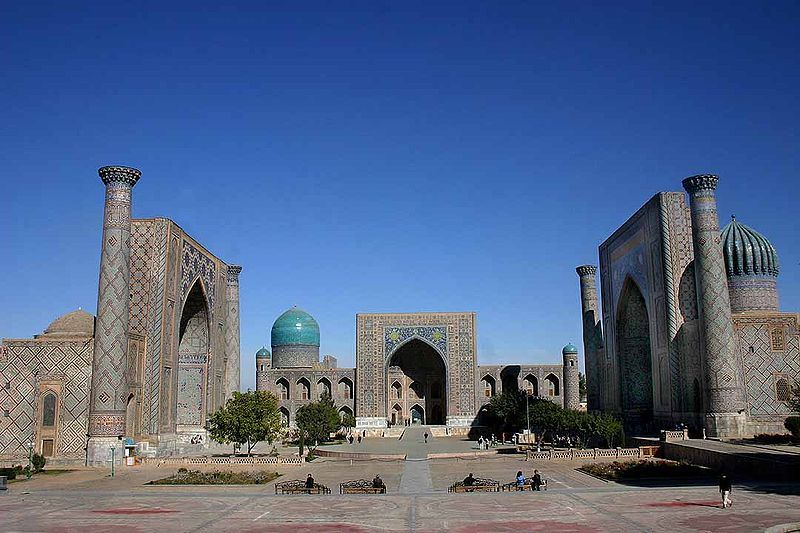 “The Silk Road, Samarkand, the River Oxus – what words to set the pulse racing…” so began Minn Hogg’s feature on Samarkand in Cornucopia 33. In the end, however, she found herself lost for words. Which is not too surprising as Central Asia’s most fabled city is a byword for exotic travel. Founded by the Sogdians around 700BC, the city lies midway between Istanbul and the ancient Chinese capital of Xi’an, where the Silk Route began. “Everything I ever heard about Samarkand is true, except it is even more beautiful than I imagined,” reported Alexander the Great in 329BC. But it was Tamerlane, the Turcised Mongul, who made it the capital of his empire and left the greatest mark, bringing artisans from across his empire, from Anatolia to India, while scholars made it a centre of learning. Today, the second city of landlocked Uzbekistan has a population of just under 400,000, spreading out in Soviet-style architecture from its historic heart. Tadjik is the main language, and a Mediterranean climate is good for growing its famous golden peaches – “No other fruit has so many symbolic and material associations with sensual beauty,” writes Berrin Torolsan in Cornucopia 23.

The highlight of the city is the Rajistan, described by Lord Curzon as “The Noblest Market square in the world.” This was where all road leading to the city met in a sandy market square flanked by three exquisitely tiled madrassas. The earliest, Ulug Beg, dates from 1420. Opposite, on the east side, is Shir Dor Madrassa (1639) named after the lions (shir) on its portal with sun faces painted on their backs. Completing the trio is Tillya Kari Madrassa (1660) with an enormous turqupoise dome and gilded interior. Tamerlane’s main contribution to the city’s monumental architecture was the Bibi Khanum Mosque on the northeast side of the Rajistan, which was built too quickly and soon crumbled, though its three domes have been restored. A little further to the northeast is Shah-i-Zinda, a street of wonderfully ornate tombs from 1372 to 1470 that include the Timurid nobility. Timerlane’s own mausoleum is in the turquoise-domed Gur-i-Mir (Tomb of the Emir) to the southwest of the Ragistan, which set the pattern for later Mongul architecture. His tomb is topped with an enormous slab of jade.

Samarkan international airport is 11km from the city centre, and has regular flights from Tashkent, Moscow, St. Petersburg, Simferopol and Kazan, with charter flights from European countries, including Istanbul.