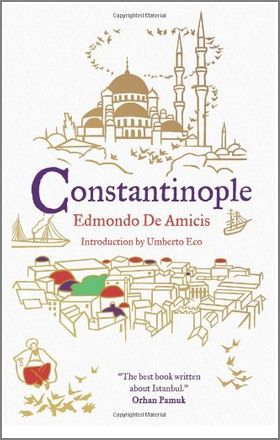 Translated by Stephen Parkin
with foreword by Umberto Eco

‘I had De Amici's text ready when I came to Istanbul. For he had seen what I cannot see today.’
Umberto Eco

The only edition in print of one of the most evocative accounts of exotic cities by one of the most loved Italian authors. Introduction by Umberto Eco. Ideal for travellers to Istanbul. Includes engravings. An invaluable record of the metropolis as it used to be – a fascinating crossroads between Eastern and Western civilization and one of the most cosmopolitan cities of its time – as well as a vivid example of a European tourist’s reaction to it – part delight, part incomprehension – this book will provide an enriching read for lovers of history or those planning to visit Istanbul themselves.

The arrival at Constantinople made such an overpowering impression upon me as to almost efface what I had seen during the previous ten days’ trip The Ionian Sea, blue and unruffled as a lake; the distant mountains of Morea, tinged with rose color in the early morning light, the archipelago, gilded with the rays of the setting sun; the ruins of Athens; the Gulf of Salonika, Lenuios, Tenedos, the Dardanelles, and a crowd of persons and events which had caused me infinite amusement during the voyage, — faded into such indistinct and shadowy outlines at the first sight of the Golden Horn that were I now to undertake a description of them it would be an effort rather of imagination than of memory; and so, in order to impart something of life and warmth to the opening pages of my book, I shall omit all preliminaries and begin with the last evening of the voyage at the precise moment when, in the middle of the Sea of Marmora, the captain came up to my friend Yunk and me, and, laying his two hands on our shoulders, said, in his pure Palerman ‘from the Straits of Messina to the mouth of the Bosphorus.’

Ah! you smile, my good reader, you who have plenty of money and are tired of spending it – who, when a year or so ago the fancy seized you to go to Constantinople in twenty-four hours, with your purse well lined and your trunks packed, set forth as calmly as if it were a trip to the country, uncertain up to the last moment whether, after all, it might not pay better to take the train for Baden-Baden instead. If the captain had said to you, “To-morrow morning we shall see Stambul,” you would probably have answered, quite calmly, “Indeed? I am very glad to hear it.” But suppose, instead, you had brooded over the idea for ten years; had passed many a winter’s evening mournfully studying the map of the East; had fired your imagination by reading hundreds of books on the subject; had travelled over one-half of Europe merely to console yourself for not being able to see the other half; had remained nailed to your desk for a whole year with this sole object in view; had made a thousand petty sacrifices and calculations without end; had erected whole rows of castles in the air, and fought many a stiff battle with those of your own household; and finally had passed nine sleepless nights at sea haunted by this intoxicating vision, and so blissfully happy as to have a twinge of something like remorse at the thought of all your loved ones left behind; – then you would have some idea of the real meaning of those words : “To-morrow at daybreak we shall see the first minarets of Stambul;” and instead of replying phlegmatically, “I am glad to hear it,” you would have given a great thump on the bulkhead, as I did.