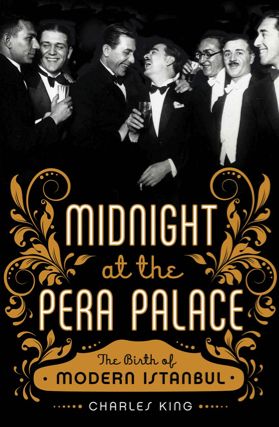 Midnight at the Pera Palace

The Birth of Modern Istanbul

When the Ottoman Empire collapsed, so many spies mingled in the lobby of Istanbul’s Pera Palace Hotel that the manager posted a sign asking them to relinquish seats to paying guests.

‘Intrigue, violence, sex, and espionage, all set against the slow dimming of Ottoman magnificence. I loved this book. Simon Winchester

‘This social history of one of the world’s most fascinating cities is as illuminating as it is entertaining. Characters from Trotsky to Hemingway, from a blind Armenian musician to a future pope, help tell the story of how Istanbul transformed itself from a refugee-clogged backwater into a vibrant metropolis. Midnight at the Pera Palace is a true Turkish delight.’
Stephen Kinzer, author of ‘Crescent and Star: Turkey Between Two Worlds’ and ‘Reset’.

‘Mr King has found a winning formula for depicting the micro-and macro-history of one of the world’s most seductive places’. The Economist

Charles King is a professor of international affairs at Georgetown University. A frequent media commentator on global issues, he is the author of Odessa the “finely written and evocative portrait of the city.” The Economist