The ‘Monster of Moda’: such a nice boy

Canavar: portrait of an artist in pursuit of the unpleasant

By Paul Benjamin Osterlund with photographs by Monica Fritz | August 22, 2020 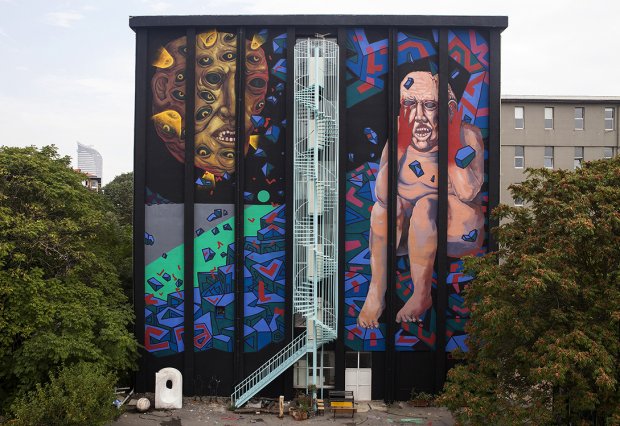 The home and studio of the Istanbul-based artist Canavar (Turkish for ‘monster’), whose work above graces the walls of Marmara University building, is tucked away on a backstreet in the heart of Kadıköy’s Hasanpaşa neighbourhood, one of the few areas in the district that has not been gentrified or was even expensive to begin with.

In the centre of the quarter there is a beautiful century-old mosque with a fascinating minaret that looks as if it was built using a repurposed Corinthian-era column. 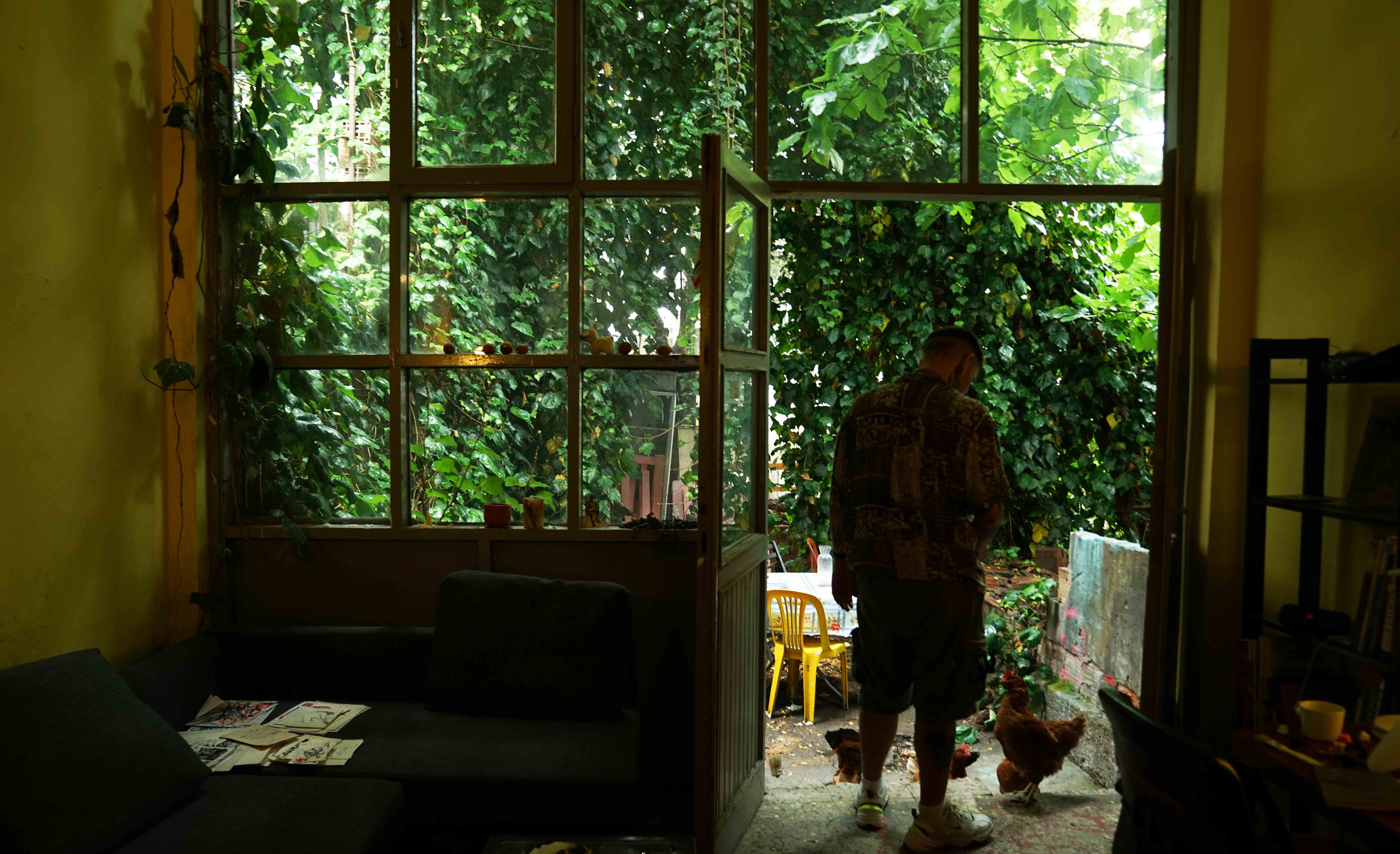 Beyond the stacks of canvasses and shelves of painting supplies is an oasis of a backyard, lined wall to wall in layers of lush, dark-green ivy, where stray cats manage to get along with the chickens that have wandered over from their coop next door. When the studio door is open, they head nonchalantly inside. 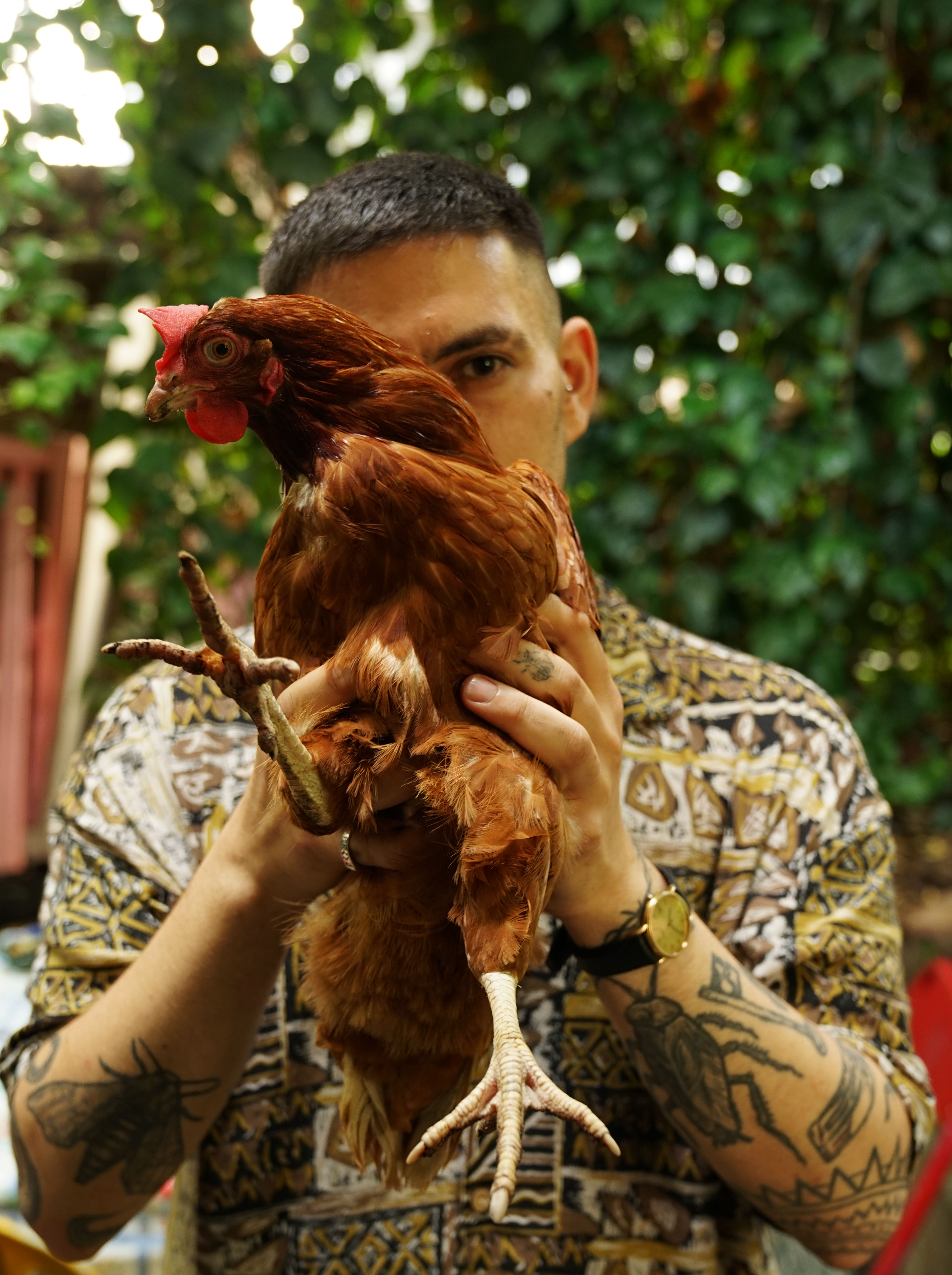 On the coffee table lies a curiously charred copy of Thus Spoke Zarathustra. The artist has shared a complicated yet definitive relationship with Nietzsche’s magnum opus for nearly half his life. As a teenager at high school in the bleak industrial city of Gebze, in the Anatolian outskirts of Istanbul, Canavar – finding himself starting to question life, God, his family and himself – had asked a friend to recommend a book that would be helpful. ‘I felt as if I was taking my first steps in life,’ he says. ‘I was trying to figure everything out and it began to become more complicated inside my head. I didn’t have many people around me that I could talk to about this.’ Canavar’s friend, an anarchist-minded rarity in conservative Gebze, suggested Thus Spoke Zarathustra, and he has stuck with it ever The artist, now about to turn 30, feels it represents the second half of his life. 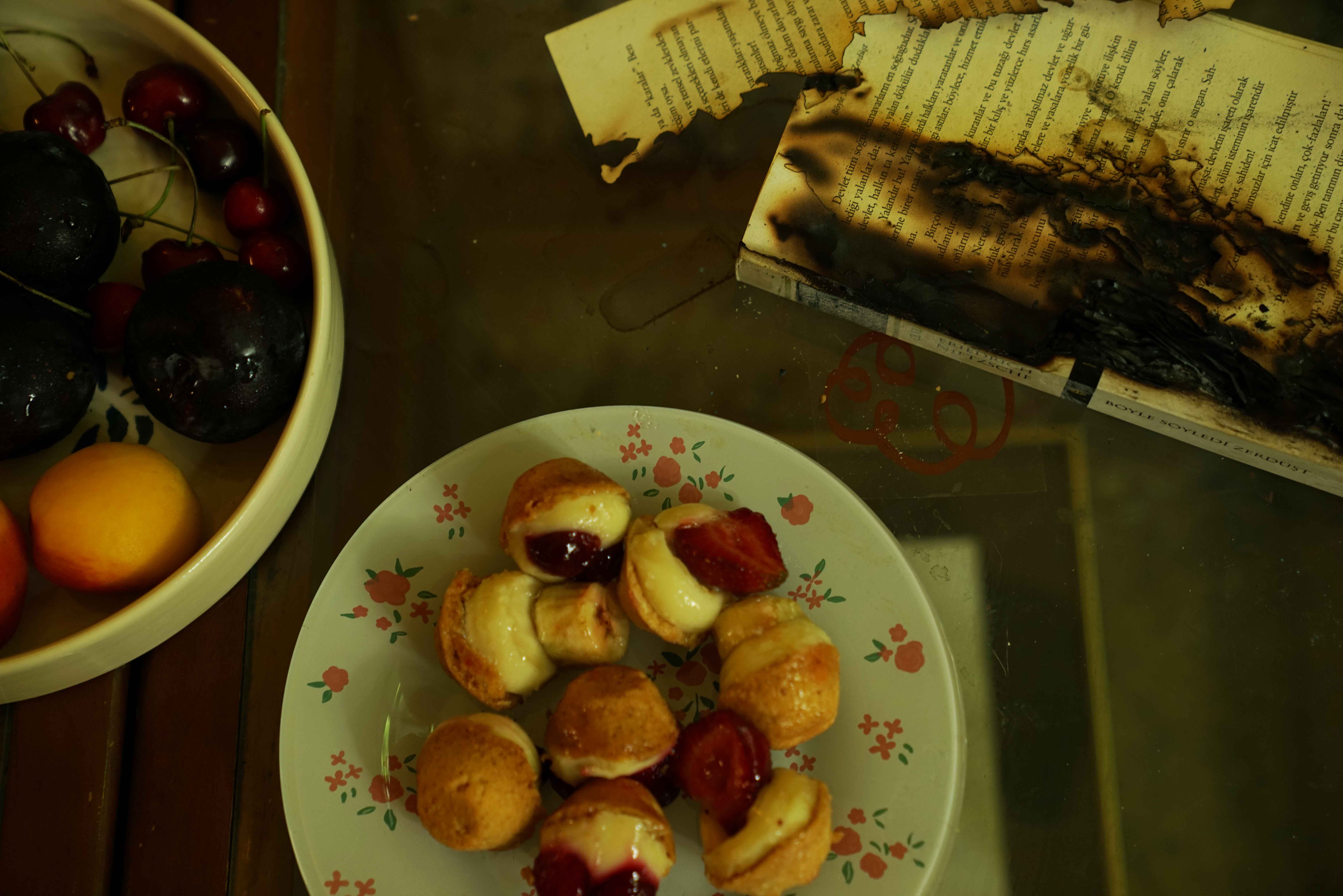 ‘One evening recently I was drinking heavily and this book once again took me back to my past. It was like it became my hymn book. I got pissed off and I burned it. That is how it happened, but I couldn’t quite burn it all the way,’ Canavar says. A second copy sits unscathed on a shelf. 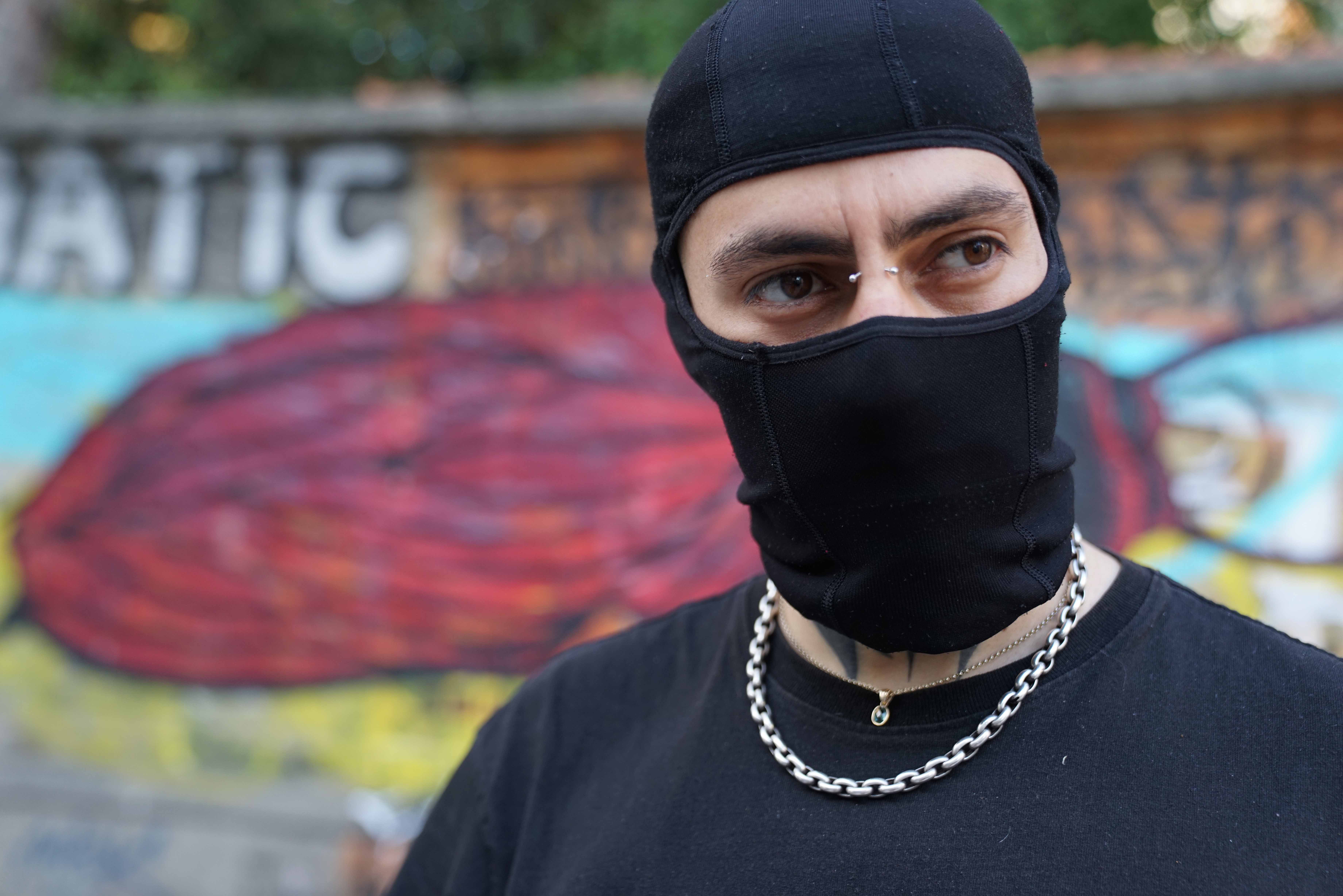 While Canavar comes across as every bit the street artist – the Monster pseudonym and an insistence on being photographed wearing a balaclava – he also draws, paints, tattoos and designs album covers. 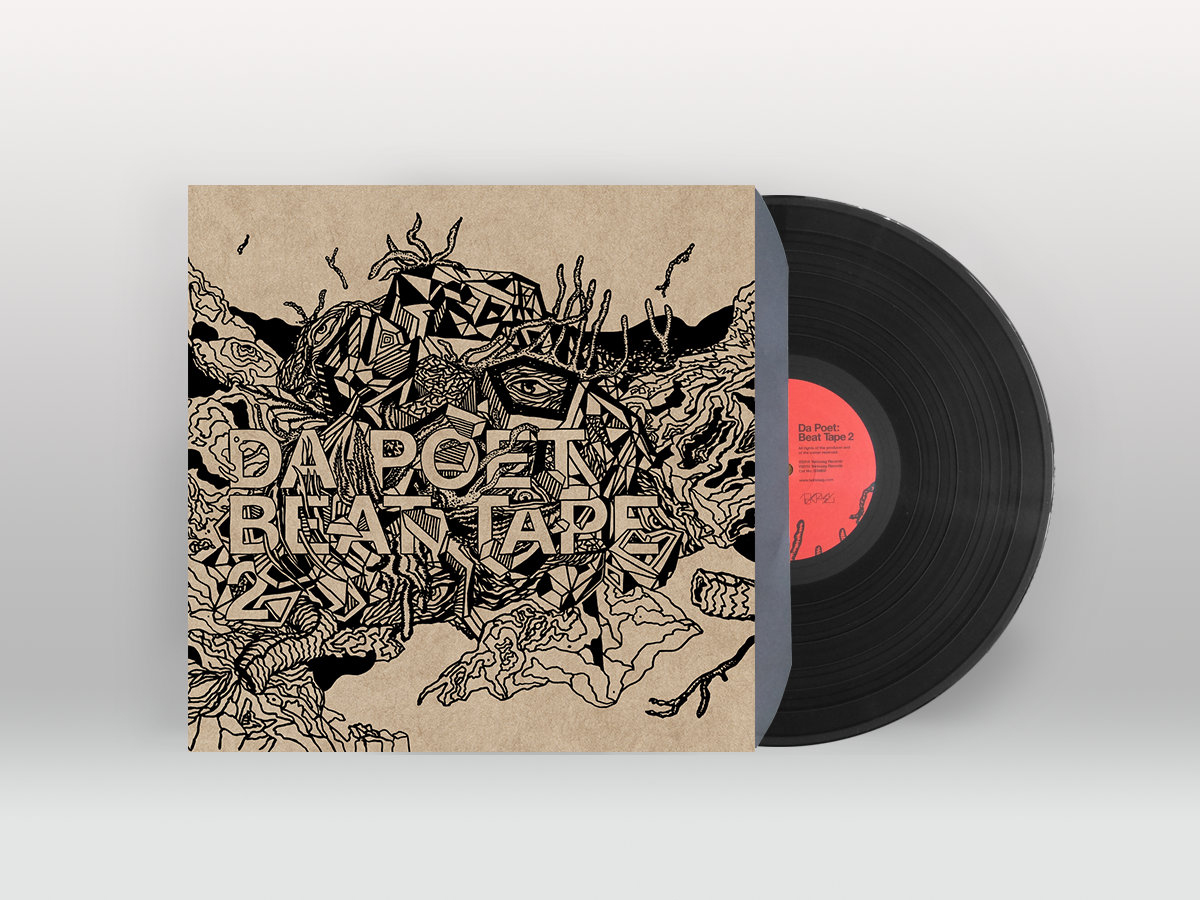 They include this 2017 LP by the veteran rapper/producer Da Poet. 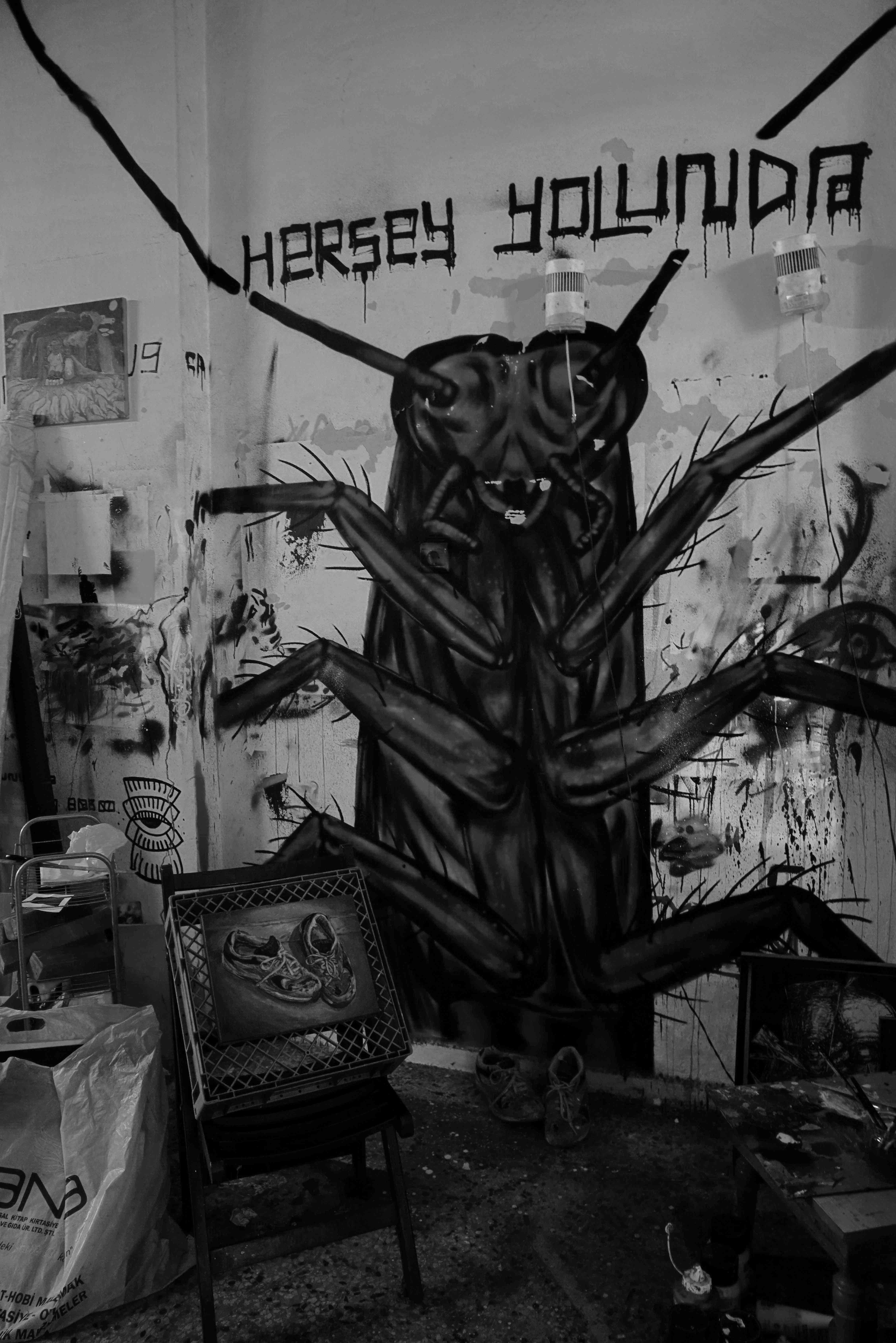 But though his work runs the gamut of styles and subjects, it is tied together by a creeping sense of dread, a pulsating anxiety, and severe tones of of black, grey, red and brown. 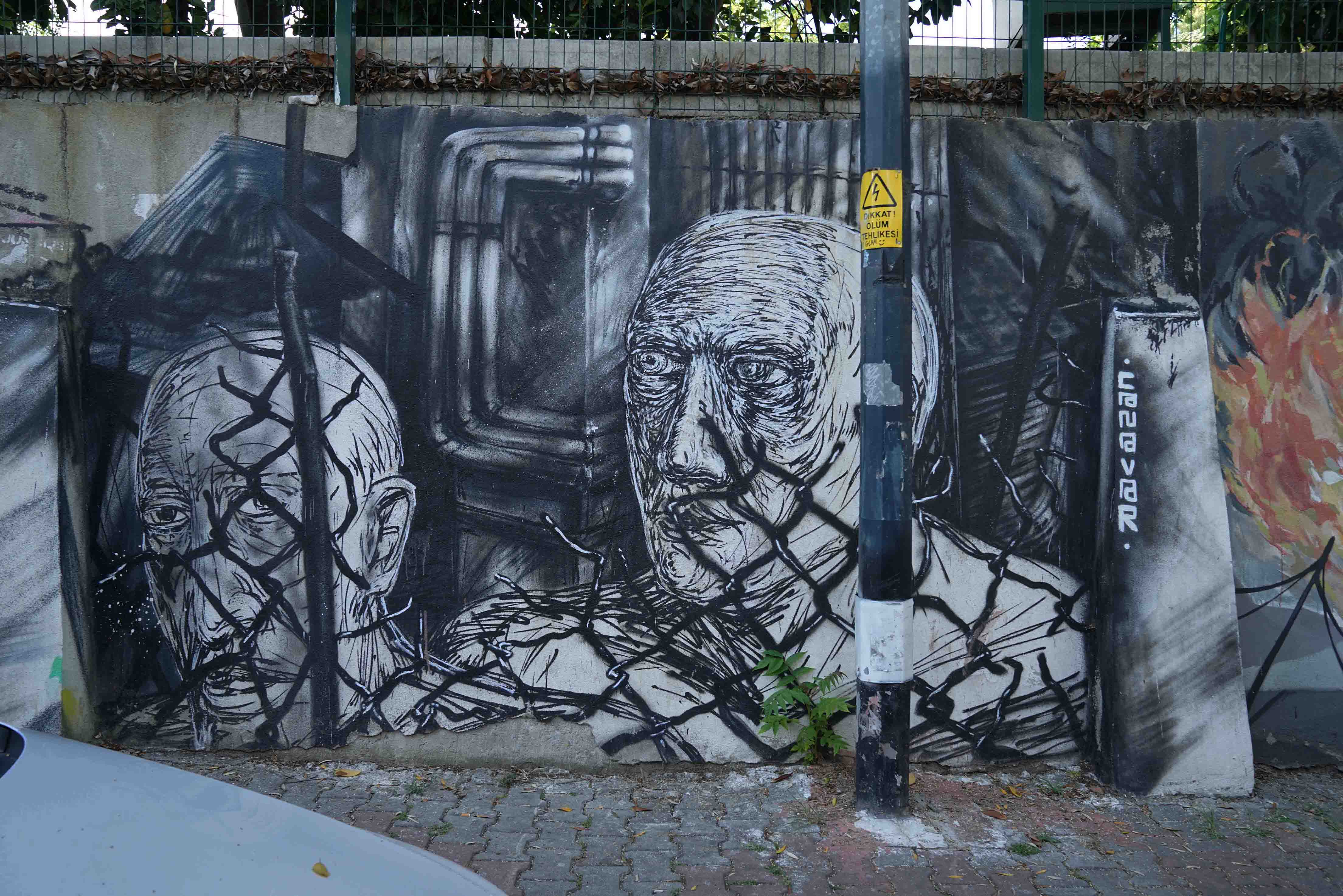 A major influence on Canavar’s art is his hometown, Gebze. Located just to the east of Istanbul, in the neighbouring province of Kocaeli, and accessible by suburban train, it feels worlds away. ‘Think of Istanbul as a mall. Gebze is the factory that produces the products found in that mall. And when we think of Gebze as a giant factory, the people that live there are its workers,’ Canavar tells me. A little further to the east is the district of Dilovası, often in the news for the alarming and chronic health problems suffered by its residents, thanks to toxic fumes emitted by nearby factories. 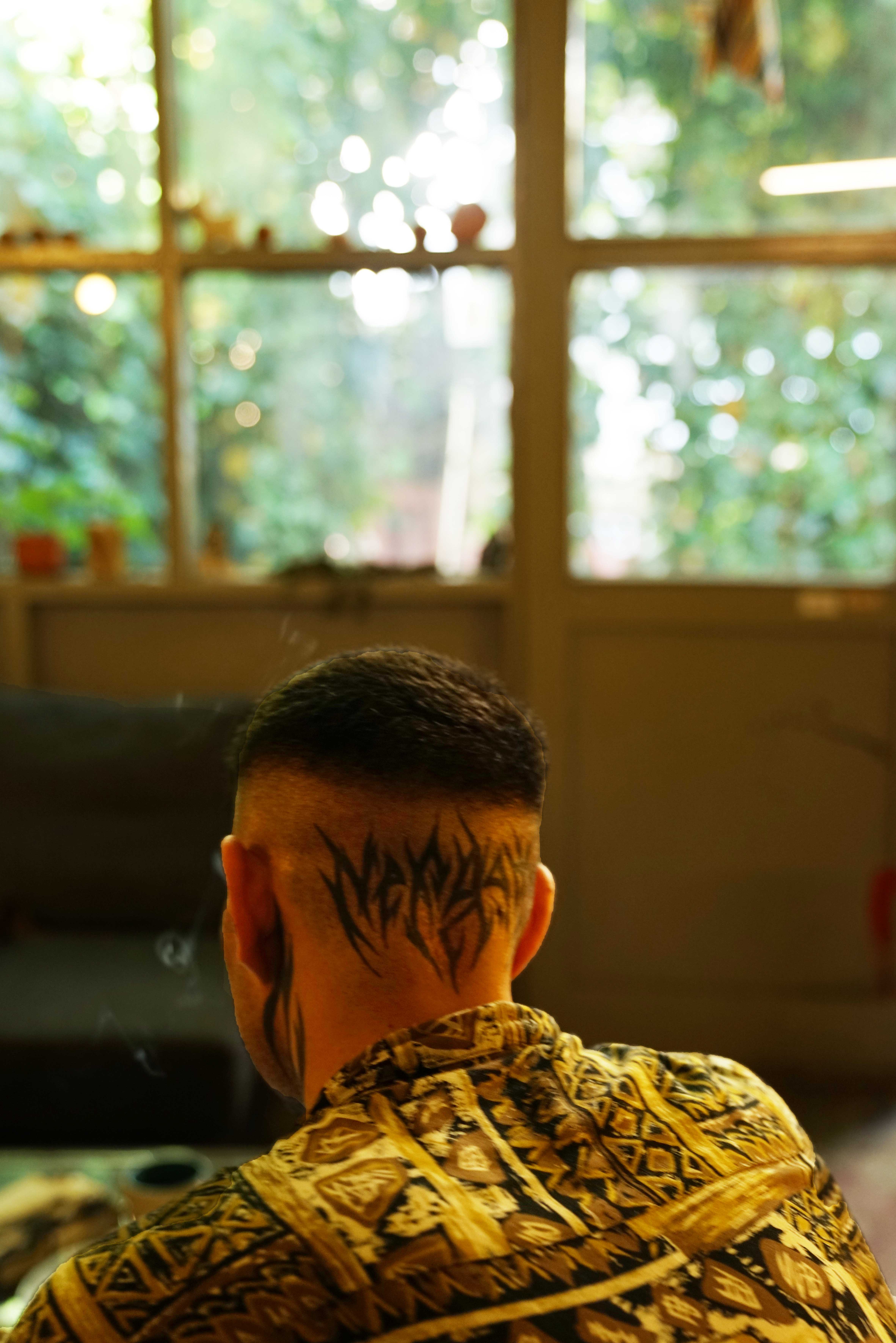 Canavar sports numerous tattoos, including one on his neck that looks like a cross between tribal and the unreadable logo of a black metal band. But his warm, sincere mien and a perpetual smile belie the harsh, stark images on his body and in his art. 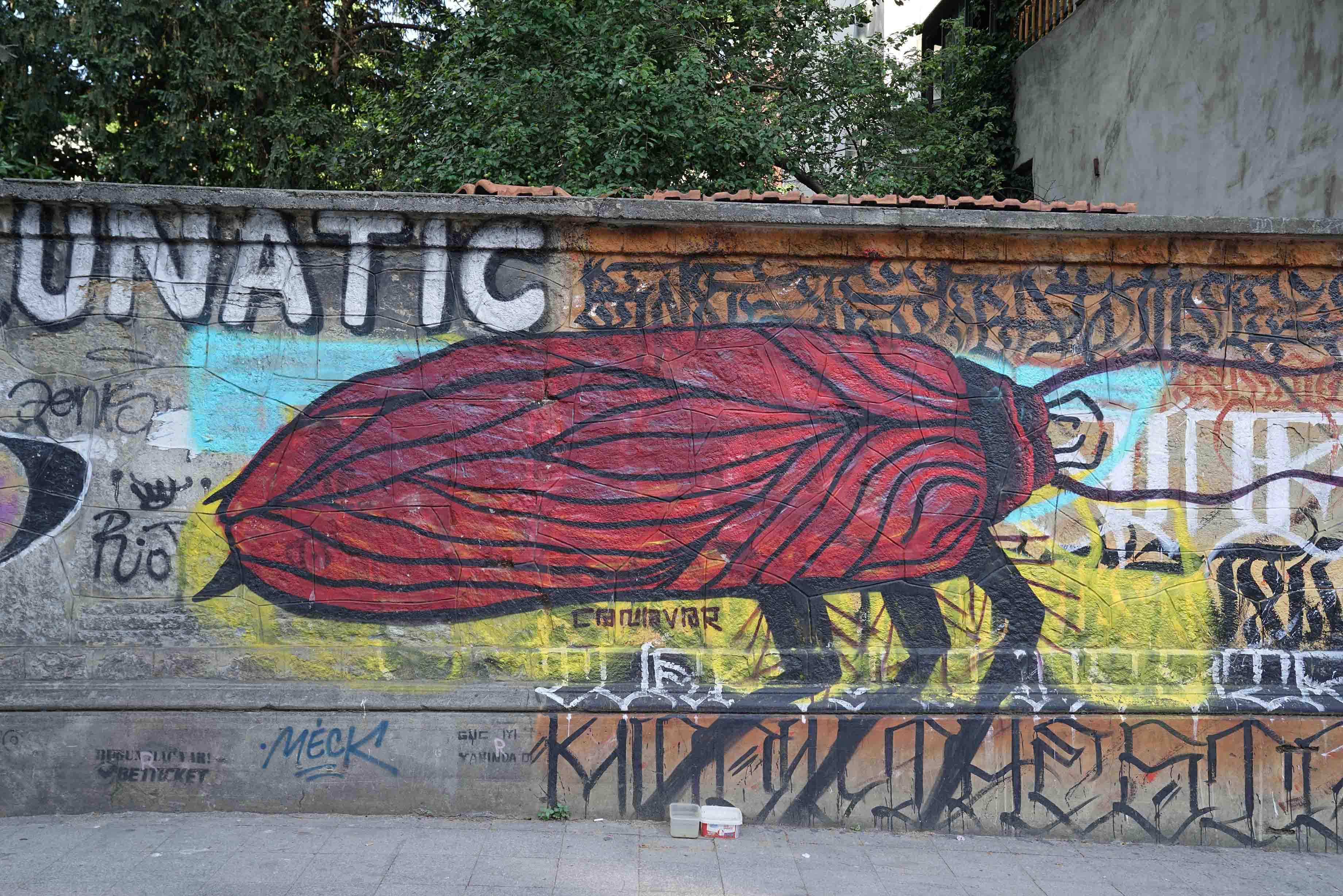 Nowhere in Istanbul better exemplifies street art’s move into the mainstream than Kadıköy. 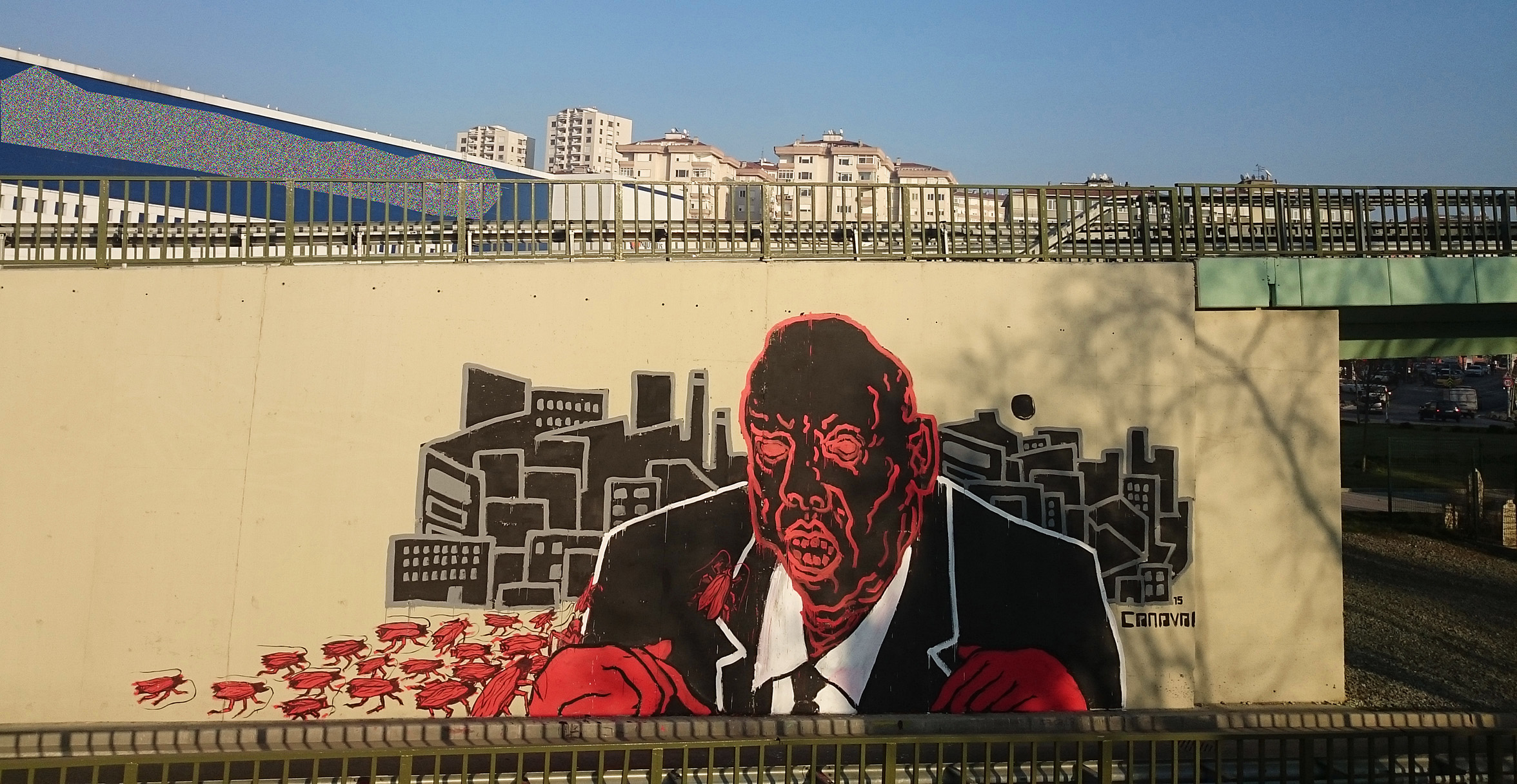 For years the district municipality has sponsored huge murals, often covering entire walls of apartment buildings, particularly in the Yeldeğirmeni neighborhood, below Hasanpaşa, which experienced a swift process of gentrification. Even the Kadıköy municipal building is graced with a massive mural. 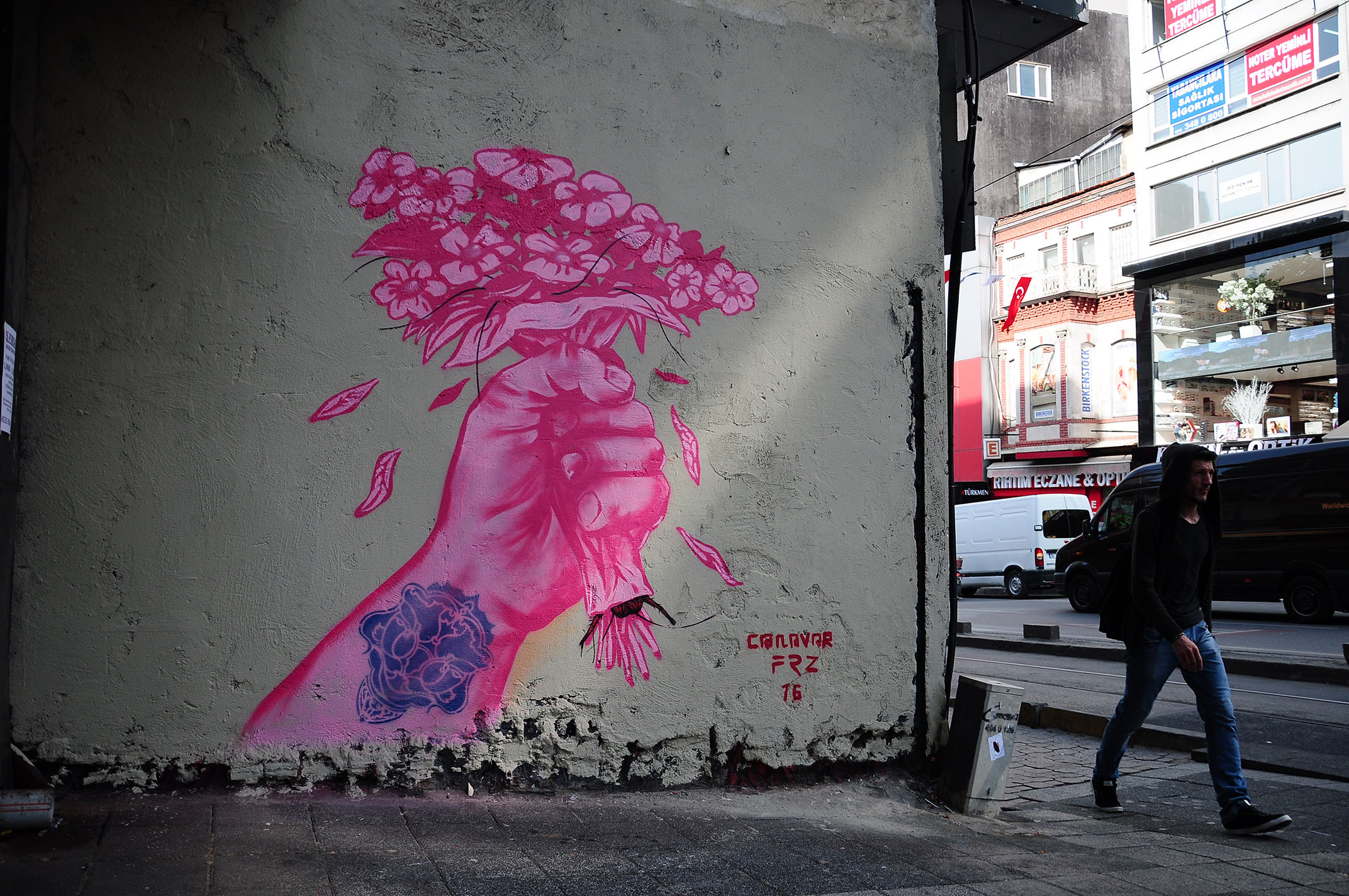 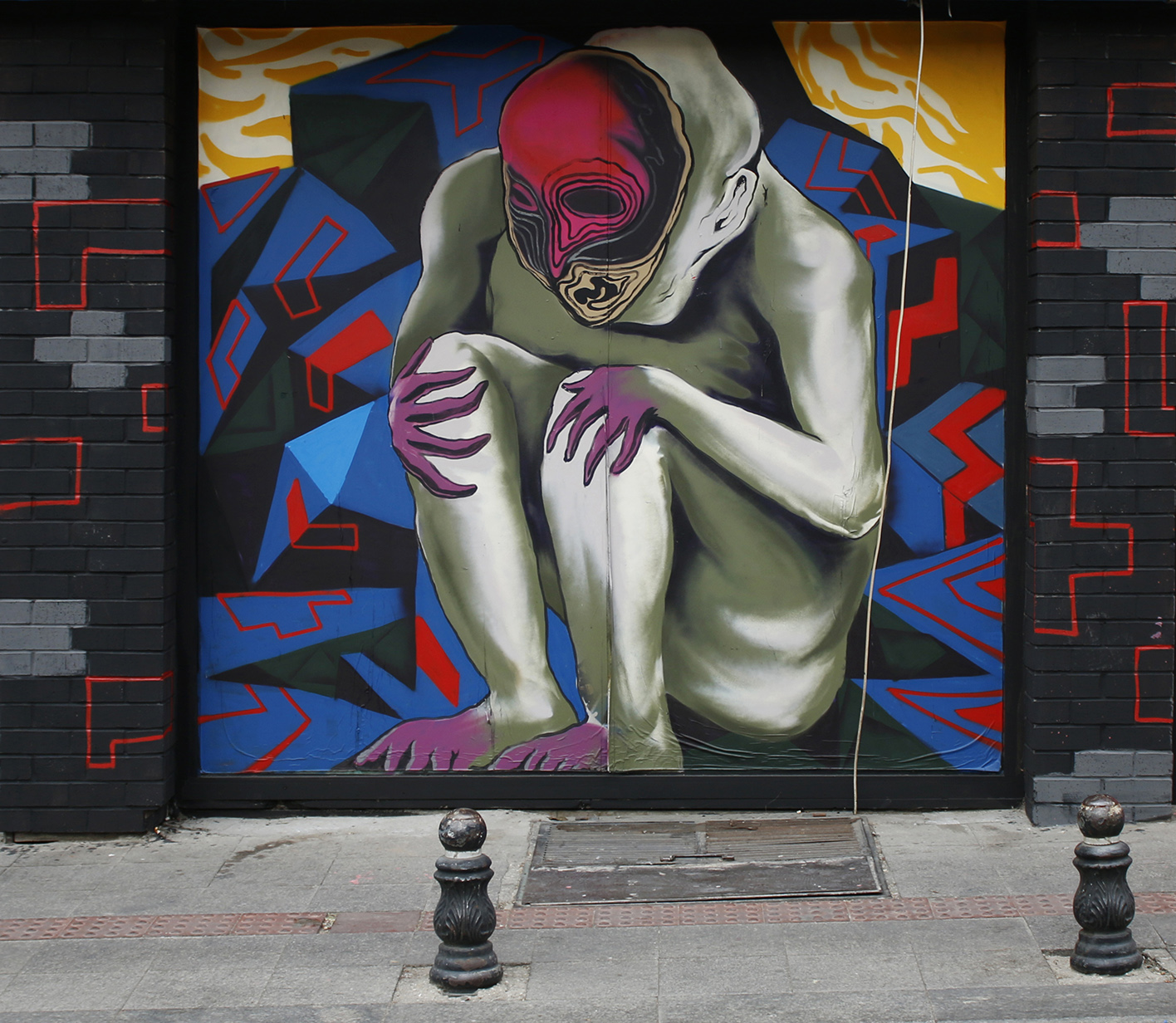 For Canavar, the mainstream acceptance of street art in Turkey is only positive from an aesthetic perspective: ‘An underground culture is actually always on the way to becoming mainstream, but what reaches the mainstream are often things that are pleasant to the ear and eye. I’m more in pursuit of that which is unpleasant,’ he says. 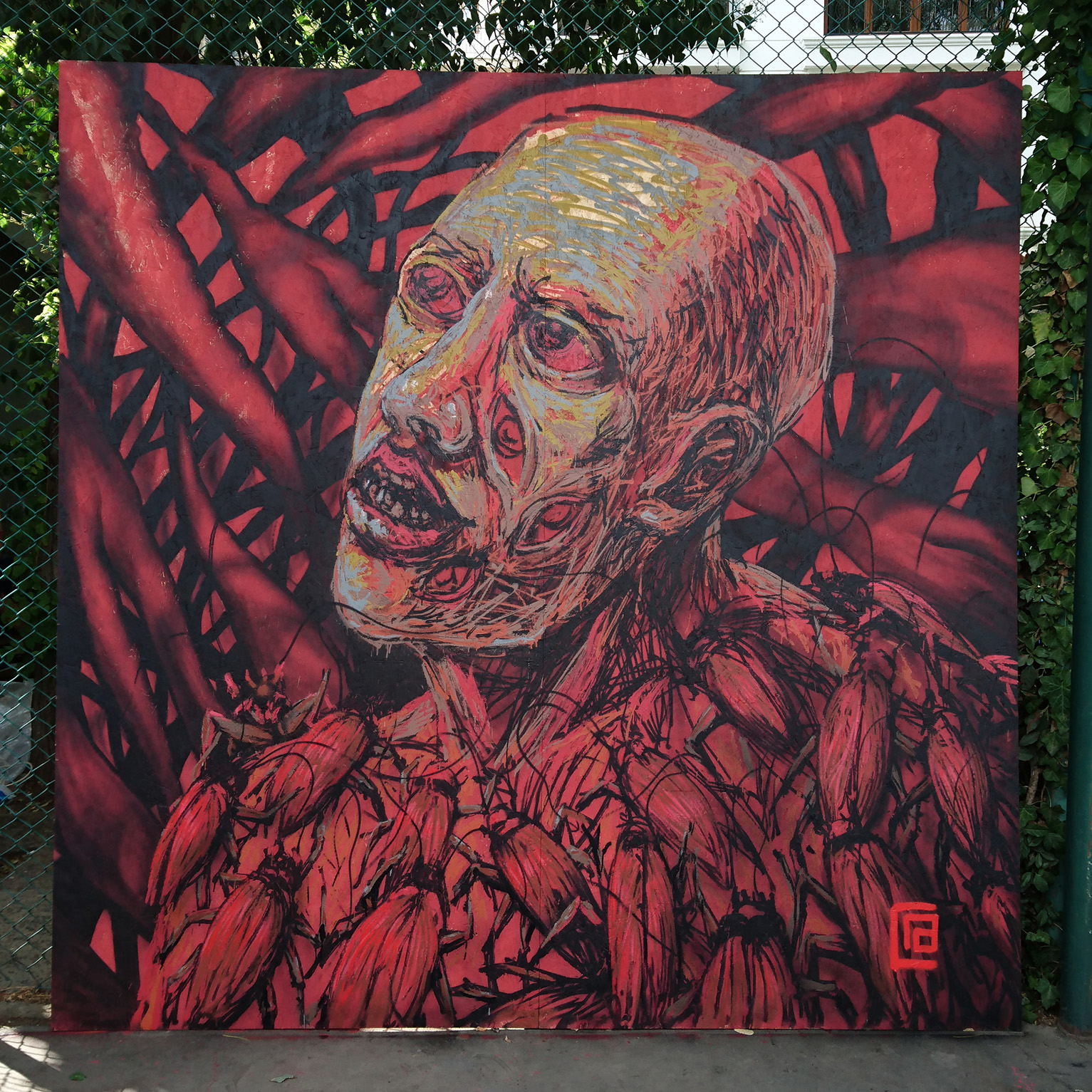 However, while his style is uncompromising, diverse and often startling, it didn’t stop him from being interviewed in the Turkish edition of Vogue last year. 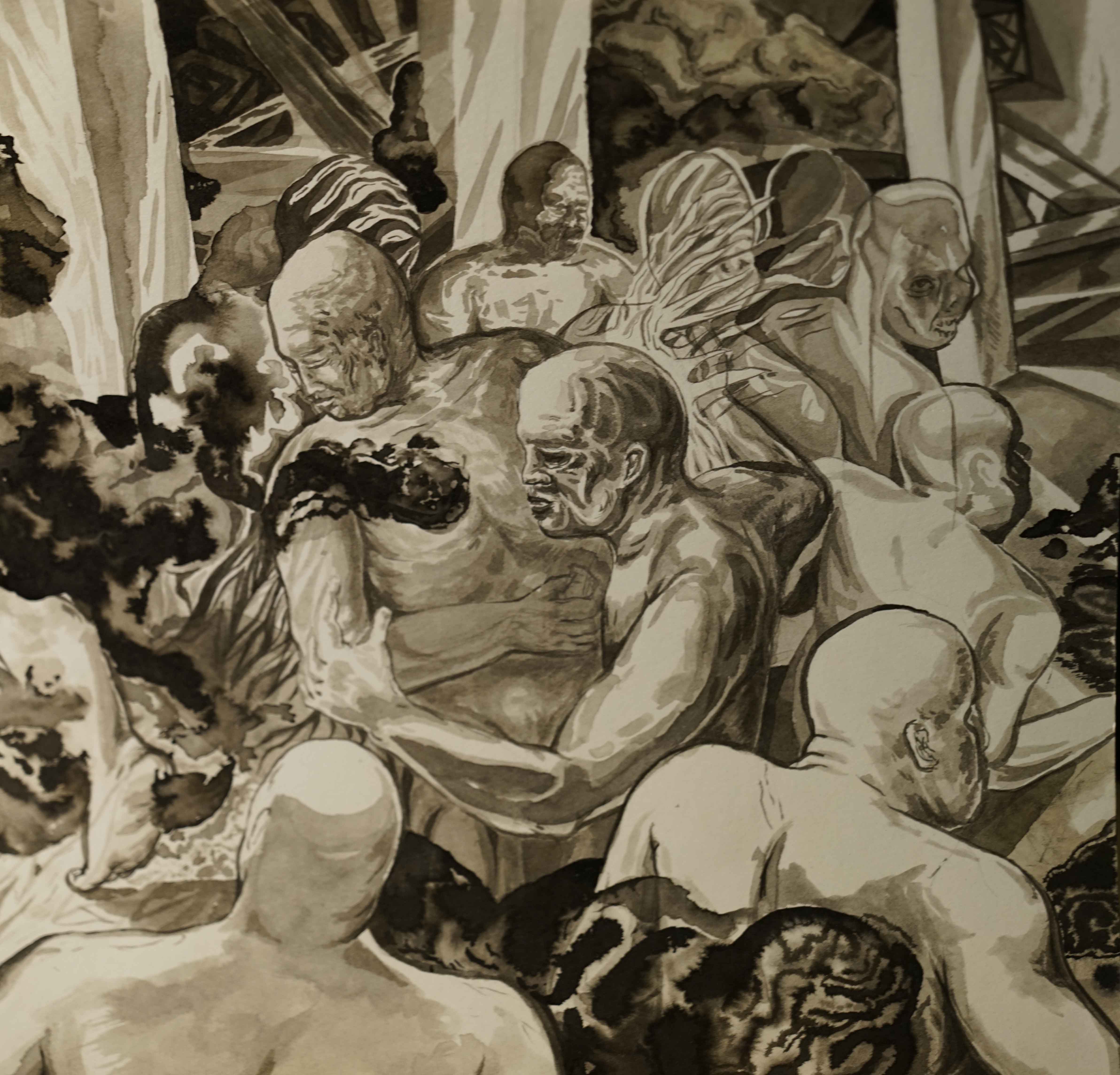 Prior to COVID-19 reaching Turkey, Canavar spent two and a half years preparing for an exhibition at the Versus Art Project in Beyoğlu, featuring 50 of his paintings. Just as the date was about to be set, the epidemic hit and the show was put on hold. 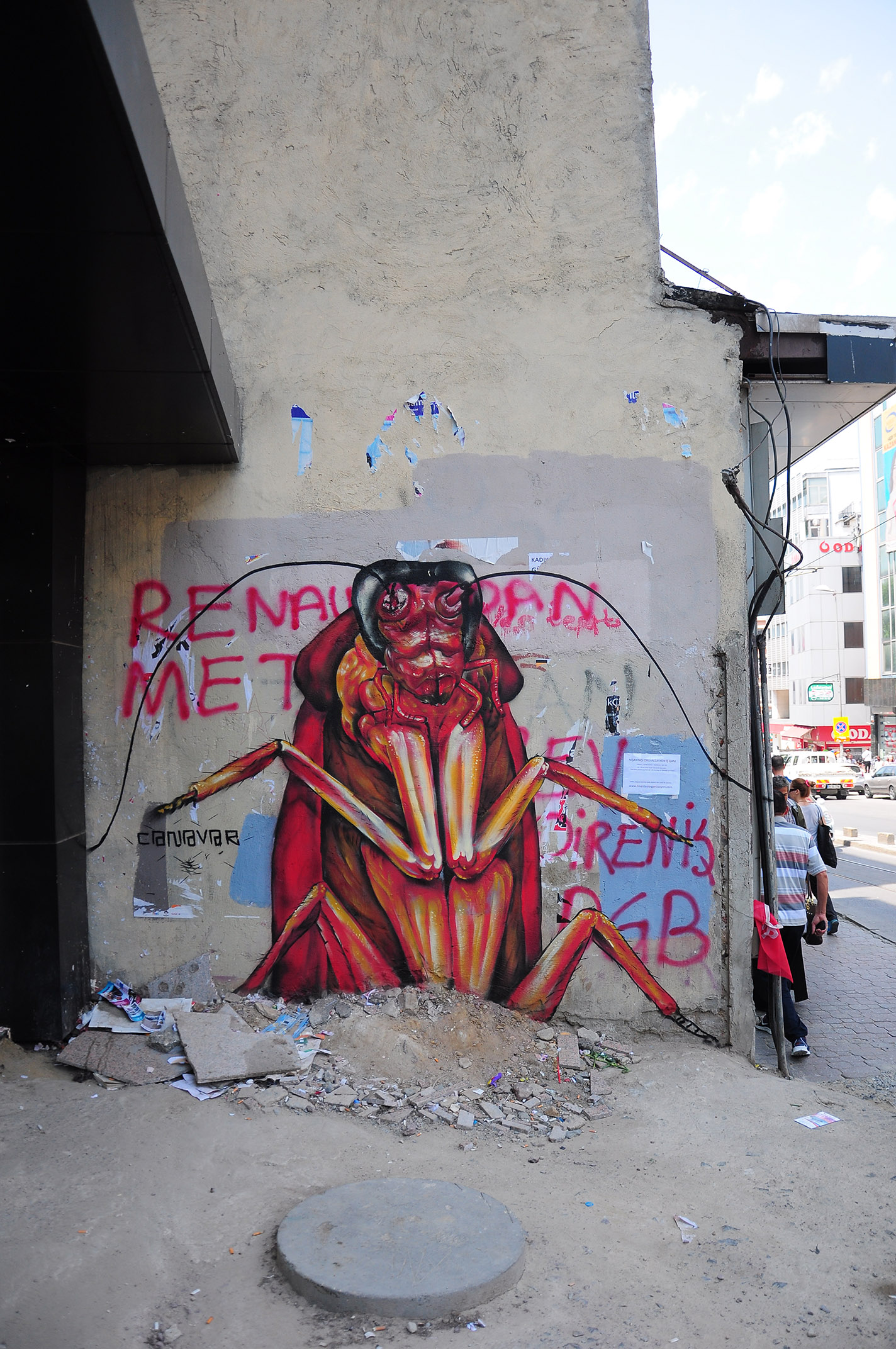 The virus was the last thing a tattered Turkish economy needed, and the worsening of difficult conditions in the country has made survival tough for artists such as Canavar. He gets by with advertising jobs and painting murals for cafés and restaurants – none of it work he counts as art. 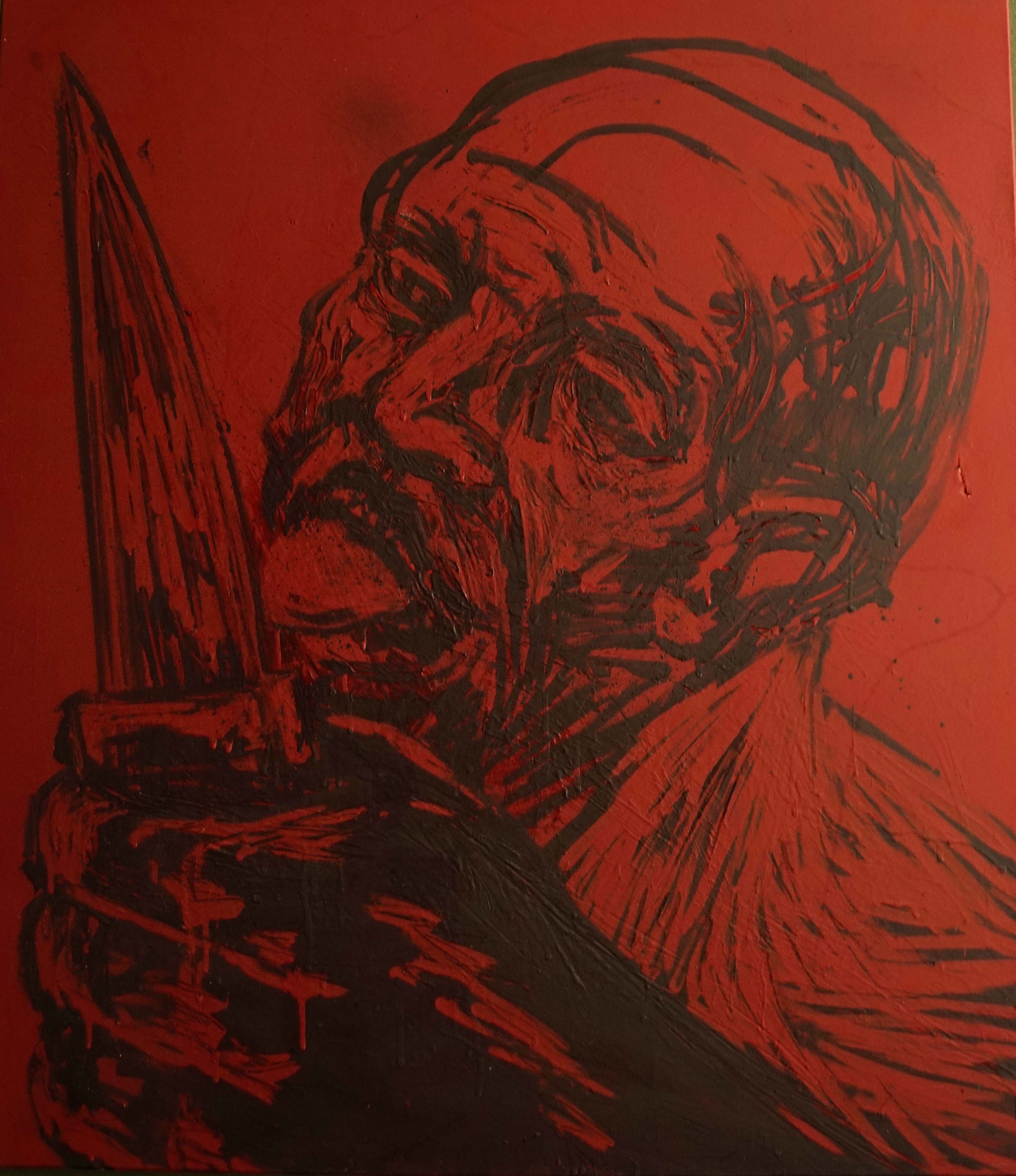 Kafka and his book The Metamorphosis have also significantly influenced Canavar’s work, in which cockroaches feature prominently. This unwanted, persistent insect is his signature symbol, representing the way he sees himself in relation to others. ‘The reason for this isn’t actually because I feel like a stranger but because those around me make me feel like one. This is because if you feel that your attitude of mind functions differently from those around you, or if it appears that way, you are seen as the other, and you might be labelled a “lost person”,’ he believes. 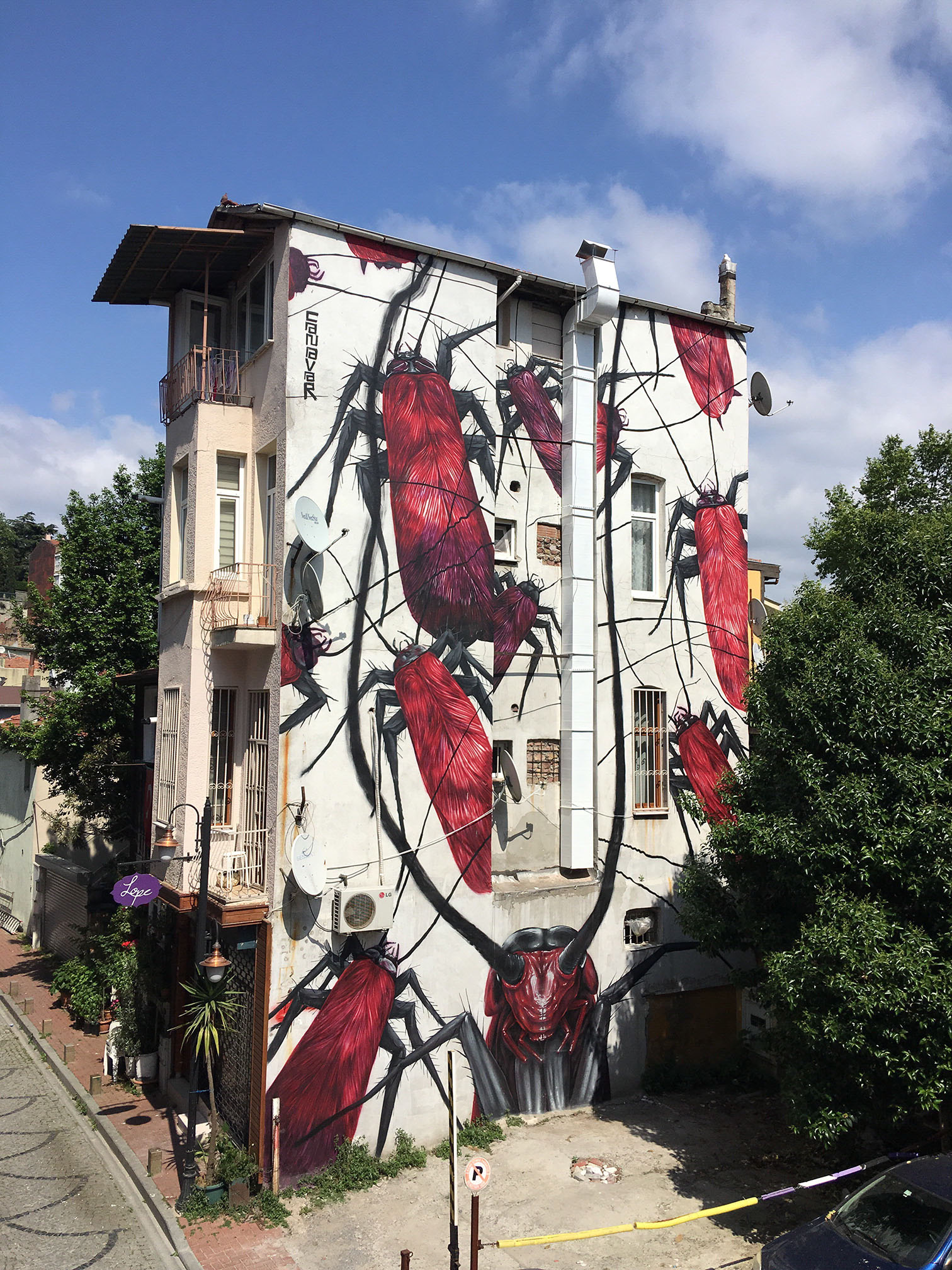 Another famous work of literature informing Canavar’s work may explain the dichotomy of his arresting, difficult style and his easygoing, affable personality. He describes his paintings as reflections of his processes of questioning himself and his surroundings, and as the product of a Jekyll-and-Hyde-like duality: ‘For a long time I was trying to be a healer in my life as much as possible, but I did paintings of those who are killers, or of our own possibilities of becoming killers. At one point I really felt like I was going to become Mr Hyde,’ Canavar says.