A certain lightness of being…

The 47th İKSV Istanbul Music Festival gets into gear 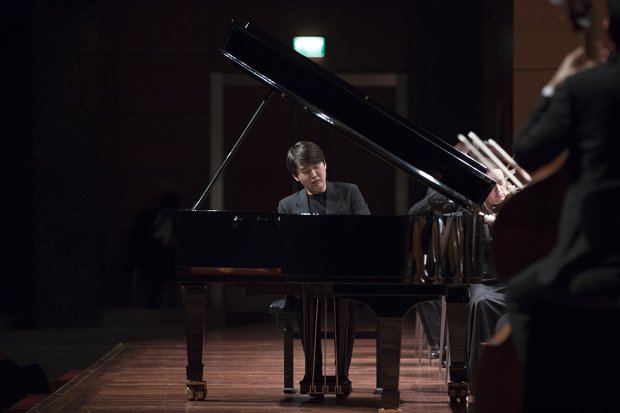 And so we have arrived at that time of year when the lime trees are in flower, the watermelons rise to new heights of drippy deliciousness and the İKSV Istanbul Music Festival gets under way. A poem by Rimbaud celebrates the arrival of warm weather with the following couplet:

Que notre sang rie en nos veines,
Voici s’enchevêtrer les vignes.
(See the vines entangle themselves
So that our blood may laugh in our veins.)

Hay-fever sufferers may well find that rather than making the blood laugh in their veins in a Dionysian free-for-all, the tree pollen makes the mucous bubble up in their nasal passages. But for all who love classical music, allergy-prone or no, the arrival of the annual İKSV Istanbul Music Festival is an event to be celebrated. The opening concert of this year’s festival (theme: Darkness of Being, Lightness of Being) was held at the Lütfi Kırdar Concert Hall in Harbiye on June 11.

Proceedings began with speeches from Mr Bülent Eczacıbaşı, chair of the board of directors at İKSV (the ‘Istanbul Foundation for Culture and Arts’) and Ms Gaye Akçen, chair of the Elginkan Community and of ECA Presdöküm Sanayii AŞ (manufacturers of central-heating boilers.) The programme acknowledged both the financial support of ECA and contributions from the Turkish Ministry of Culture and Tourism. Representatives of Tekfen and Borusan, two large companies that support orchestras, and of the various bodies allowing their venues to be used, were given plaques. A Lifetime Achievement Award was presented to Mr Rengim Gökmen, an excellent conductor who learnt his trade in Italy and is now music director of the Presidential State Symphony Orchestra in Ankara. He made a speech acknowledging his debt to his teachers, including the composer and musicologist Ahmed Adnan Saygun.

The arrival on stage of members of the Tekfen Philharmonic Orchestra announced the beginning of the concert – which, as a result of the speechifyings and presentations, was comparatively short. First we heard this orchestra, conducted by their youthful Uzbek maestro Aziz Shokhakimov, accompany the South Korean pianist Seong-Jin Cho in Beethoven’s Piano Concerto No 1 in C major. Mr Cho won First Prize in the 17th International Fryderyk Chopin Competition in Warsaw in October 2015.

As an introduction, I have chosen a recording of him playing Debussy’s Clair de Lune, from Suite Bergamasque. I like his choice of tempi: he does not make the mistake of romping through the piece like some pianists do, as if an egg-timer perched on the piano were threatening to run out of sand before they were done with their concluding smorzando:

Here is a video of Mr Cho playing Chopin’s Piano Concerto No 1 in E minor in the final of the 2015 Chopin Competition. His lightness of touch stands him in good stead when playing Chopin, as does his restraint:

It was apparent from the very start of the Beethoven that the Tekfen Philharmonic is well up to international standard. Their entries were crisp – in the first movement at least – and they accompanied the soloist with skill and diplomacy. (I have to say, though, that he allowed himself very little leeway in the rubato department, which made their life a great deal easier.) In the last movement I was surprised to see a crack or two appear in the wind department’s co-ordination: in some entries there were differences of opinion about when to get off the starting block, and the finger of accusation must point at the flutes in particular. But to compensate for these minor aberrations, the strings, brass and percussion were invariably professional.

Of Mr Cho’s performance I have to say that his Beethoven, while played with a clean touch, lacked the weight and profundity of a Sviatoslav Richter rendition or the penetration and subtlety of one by Stephen Kovacevich. To borrow a phrase from the festival’s theme, we could have done with less lightness of being and more darkness – or at least more intensity.

Here are two descriptions of the concerto. The first, by James Reel, is from the ‘AllMusic’ website.

The second is from the website of the Royal Concertgebouw Orchestra, Amsterdam.

I have been unable to find a recording of Seong-Jin Cho playing Beethoven’s first piano concerto on YouTube. However, here he is in No 5 with the ‘One Korea’ Orchestra (interesting name, what?) conducted by Myung-whun Chung – a pupil of Olivier Messiaen, by the way. The piece Mr Cho plays as an encore is the one he played in Istanbul: the second movement of Beethoven’s Piano Sonata No 8 in C minor, the Pathétique:

Regarding the encore, I wished he had chosen some Chopin. I got the impression he was on automatic pilot: there wasn’t much to get your teeth into in his interpretation.

To illustrate the advantages of playing Beethoven’s Piano Concerto No 1 with a little more oomph, here is Martha Argerich giving it her all. Her rubato gets somewhat out of hand on occasions, but full marks to her for gutsiness and emotional commitment:

I fear, however, that my strictures on the subject of Seong-Jin Cho’s Beethoven may give an unbalanced impression: I have great admiration for his Mozart. ‘Lightness of being’ is entirely appropriate for this composer, and lightness is Mr Cho’s strong suit. To round off my comments on a positive note, here is a recording of him playing Mozart’s Piano Concerto No 21 in C major with commendable amiability, a felicitous brightness of tone and just a little – but never too much – panache:

The second and final piece on June 11 was Franz Liszt’s Les Préludes. The best account of the background to this work I can find is by Dr Richard E. Rodda on the Kennedy Center website:

The feature of Liszt’s compositional technique commonly known as ‘thematic transformation’ is explained in basic, no-nonsense terms in this article from the Favourite Classical Composers website: scroll down to the part entitled ‘Le [sic – it should be ‘La’] Musique’.

I will not bore you with the full prose interpretation (by Liszt himself) of Alphonse de Lamartine's poem on which Les Préludes is based, but here is a taster:

What else is life but a series of preludes to that unknown hymn, the first and solemn note of which is intoned by Death? Love is the enchanted dawn of all existence; but what fate is there whose first delights of happiness are not interrupted by some storm, whose fine illusions are not dissipated by some mortal blast, consuming its altar as though by a stroke of lightning?

Judging from this romanticised gloss on the hard facts of human mortality, it sounds as if Franz may have been, without knowing it, a precursor of Death Metal – in mood if not in substance. With that flowing mane of hair, one might even imagine him in leathers, burning up the boulevards on a Harley-Davidson – perhaps with his consort, Princess Carolyne Sayn-Wittgenstein (to whom Les Préludes is dedicated), riding pillion.

Here is a YouTube video of the work played by the Berliner Philharmoniker under the direction of Herbert von Karajan:

The Tekfen orchestra did full justice to the piece, and the brass and percussion sections truly shone in its rumbustious conclusion – a feature that makes Les Préludes an excellent choice for a festival opener. Some members of the audience seemed not to concur with this latter statement, however, and there was a stream of people walking out. No doubt they were unaware that in serious classical music circles this action is seen as a way of expressing extreme disapproval . Be this as it may, I do hope someone, sometime, will take them gently by the hand and tell them it’s considered rude. But one must not be unduly critical. I should be thankful that the only telephone ringtone of the whole concert was unleashed at the very end of the slow movement of the Beethoven concerto, as the final pianissimo chords died away. Perfect timing, and the person responsible should be justifiably proud of themselves.

I look forward to a comprehensive dunking in the Pierian Spring, that watering-hole of the Muses, over the next two weeks. There are some real treats in store in this year’s İKSV Istanbul Music Festival. Though I may well be unable to keep up with Franz and Carolyne on their chopper, I will nevertheless endeavour to keep the reader up to speed with some of the main events.