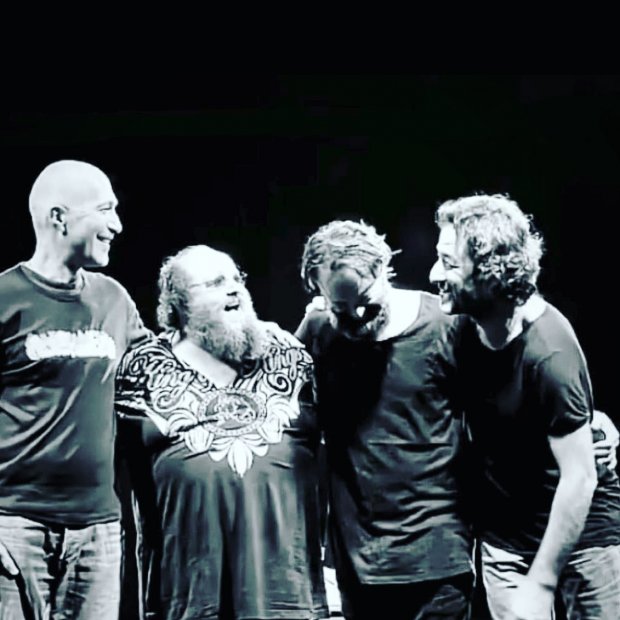 One warm evening in September, four of Turkey’s most talented jazzmen – people who had not played together for over ten years – had a musical reunion that I was privileged to attend (Above: Quartet Muartet 10 years on: from left, Sarp Maden, Genco Arı, Alp Ersönmez, Volkan Öktem). The venue was a disused shoe factory right on the shores of the Bosphorus; I am told by residents of the houses along the opposite shore that the sound of music wafting (or rather, in this case, hurtling like a demented howitzer shell) across the water frequently keeps them entertained of an evening.

I had drawn myself a map of the place, so as I stepped off the boat from Yeniköy I felt confident that I could find it. This was not, of course, my first visit to Beykoz, the last township on the Asian side of the Bosphorus before it flows into the Black Sea. Beykoz has always been one of my favourite haunts, and I therefore knew the way to nearby Ortaçeşme, where I once had a very pleasant walk admiring the plane trees that march in columns along its nondescript main street, lending the place a great deal more dignity than its architecture merits. The houses were of the Black Sea variety: between the top floor and the roof there was an unenclosed space that was being used, with eminent practicality, to dry maize and red peppers.

On the way from Beykoz to Ortaçeşme, I passed the yalı that once belonged to the Ottoman writer, journalist and publisher Ahmed Mithat Efendi (1844-1912), whose extensive library was plundered after he had died. Turning a corner, I saw a group of three street dogs standing on the opposite side of the road, outside a mosque. They looked alert and expectant, as if waiting to cross, and I paused to greet them; however, they seemed to think better of the idea, deterred no doubt by the evening traffic. (I was later told by one of the concert-goers that the minibus-driver who brought her to Beykoz had warned her that she would most certainly be torn to pieces by street dogs if she ventured as far as the shoe factory.) Going on my way, I took note of the malevolent concrete mushroom that has sprung up on the site of one of my most cherished old wooden buildings – a ramshackle household goods shop that had stove accessories in its grimy window, a leafy garden visible through a doorway at the rear.

Then, passing the chemist’s shop I had marked on my map as an indication that I was about to arrive at the all-important crossroads, I turned left by a road sign to Yuşa Hazretleri. (For those who have never been to the high hill overlooking the Bosphorus where the putative tomb of this man – the Biblical Joshua – is displayed, his coffin is 17 metres long. The hill has always been a hallowed spot: in ancient times, a statue of Zeus Ourios – the God of Fair Winds – is said to have stood there, its commanding presence a morale-booster for ships’ captains about to pass out of the Bosphorus and thus begin to negotiate Pontos Axeinos, the ‘inhospitable sea’.) Opposite the near corner of the Ortaçeşme meadow, men were sitting drinking tea and chatting inconsequentially in the warm evening air. There was a smell of rotten fruit left over from a daytime market. I narrowly missed tripping over a hosepipe.

As I skirted the side of a meadow where dog-walkers were being hissed at by scrawny cats, I wondered whether if I had been there in 1833, the sound of an accordion, or perhaps a balalaika, would have greeted me, and I would have heard Russian voices raised in song. It must surely have been in this open space that the Russian troops pitched their tents when in that year, they and the ships of their Black Sea fleet came to Istanbul at the invitation of Sultan Mahmud II. ‘Really? Why should the Ottoman Sultan appeal to his age-old enemy for assistance?’ you may ask: the reason is that after his army had been defeated in Anatolia by that of Muhammed Ali, the ruler of Egypt, the Sultan desperately needed a stronger force than his own to protect his capital from the invader. In the event, Muhammed Ali was warned off by Britain and France, a truce was signed in Kütahya, Istanbul was saved, and the Russians went home. But I digress … After straying temporarily off course in the darkness (some massive concrete pipes were lying by the side of the road prior to being laid in place, and I had the opportunity to examine them at rather closer quarters than I would have desired), I came to a crossroads. And then, there it was – the entrance to Beykoz Kundura, the former shoe factory. My mind went back to an occasion in the 1980s when I bought a pair of shoes that had been manufactured here. The shoes fell apart in less than two months. An omen, perhaps?

After I had explained to the courteous man at the door of this establishment, now a concert venue, that I could not show a QR code because I did not possess a smartphone, and various telephone calls had been made, it was determined that in spite of the obvious decline of my mental faculties – I was wearing my ‘Phoneless Fuddy-Duddy’ armband – I should be allowed to proceed. I and my fellow arrivees (bet you winced at that!) were directed to a minibus. The first of the surprises I received that evening was that after a very short ride in this vehicle, we were asked to transfer ourselves to a glorified golf cart, which then whirred and clattered through a maze of old factory buildings to a place where a stage had been erected no more than a few metres from the Bosphorus. Nearby there was an indoor café overlooking a courtyard, so I ordered a Turkish coffee and looked around for somewhere to sit. And so the chain of events that led to the second surprise of the evening – my humiliating downfall – was set in motion.

My eye fell on what I imagined to be a rocking chair standing in one corner of the room. It actually consisted of a white-painted metal swing-seat that was attached at the sides to a metal frame. So I approached the contraption, made to sit down on the seat – and within a split second found myself plonked unceremoniously on the floor. The metal seat, having by this time ricocheted back from its brief contact with the wall, was now – most unfairly, I thought – attempting to decapitate me. My sitting motion had been a disastrous miscalculation: as soon as I had made contact with the seat it had immediately swung backwards, entirely eluding me. As I sat there sprawled abjectly in the dust, a kind lady asked me if I was all right; I answered in the affirmative and picked myself up. Not being one to accept defeat so easily, as soon as she had disappeared into the courtyard with her drink I tried again. This time, I said to myself, I’ll sit farther back in the seat – then it won’t be able escape me. But once again it shot from under me on first contact, and once again I landed on the floor in an undignified heap with my legs in the air. Happy birthday, John, I thought.

After this self-inflicted misadventure, I consoled myself by admiring the mature trees that stood between the former factory and the shoreline; also, some of the now-deserted buildings were in most agreeable states of decay and ruination, and I gasped in admiration at the dignity, and indeed the elegance, with which they were confronting their demise. I observed the lights on the European side of the waterway blinking appreciatively, though somewhat insensitively, at my recent discomfiture, and the undernourished cats that were prowling among the socially-distanced armchairs in front of the stage. After a short interval, the musicians – guitarist Sarp Maden, bass guitarist Alp Ersönmez and drummer / percussionist Volkan Öktem, three of the former members of ‘Quartet Muartet’ – duly appeared.

I have already described two concerts given (in February 2019 and February 2020) by Sarp Maden with Israeli saxophonist Gilad Atzmon, so the reader may possibly remember my remarks on Sarp’s style. In previous reviews, I have made it clear (I hope) that this style is abrasive rather than anodyne, though there are unexpected moments of reassurance and repose when he allows the emotions to be temporarily unravelled from the razor wire. I quote from my review of the concert in February 2020:

'Gaza Mon Amour' was a considerably tougher number than the first one had been, and it called forth some iron-in-the-soul metallic chords and predatory swoopings – like those of the somewhat unwholesome birds that aid and abet the attack on Minas Tirith by Sauron’s minions in The Lord of the Rings – from Sarp Maden. (His name means ‘precipitous metal’, by the way.) Moaning high notes are one of his trademarks, and he threw up a good many multicoloured baubles (chock-full of nourishing strychnine) during the course of the piece.

Bass guitarist Alp Ersönmez is, like many of Turkey’s outstanding jazz musicians, a graduate of Bilgi University’s now defunct Jazz Department: his teachers at Bilgi (where he studied both guitar and composition) were Ali Perret, Kâmil Özler, Ricky Ford and Selen Gülün. It was Alp, in fact, who wrote some of the pieces that were performed that evening. Drummer / percussionist Volkan Öktem, meanwhile, is a master of his art who is intensely concerned with detail: the cross-rhythms he produces may be multi-dimensional in their complexity, but his style becomes considerably more direct – not to say rapaciously driven – when he goes on a rhythmic rampage.

During the first number, as Sarp was entertaining us with smoky, Scorpionic chords, a bearded figure entered the stage carrying what I at first took to be an accordion, but which turned out to be a kind of portable keyboard. This was the reclusive Genco Arı, a pianist and arranger of international quality whose public appearances are, regrettably, as rare as tarantellas in a trash metal concert. Thus the fourth and final member of ‘Quartet Muartet’ – a group I heard play many times at Istanbul’s clubs during the first decade of the current century – made his appearance.

The concert was inspirational: Sarp’s emotionally equivocal guitar flourishes – trick or treat? – sent spasms shooting up my spinal column until they irrupted into my synapses, releasing pleasure-bombs; Genco’s sinful sense of rhythm and musical appropriateness (but most of all, his perfect phrasing) left me, as always, open-mouthed; Volkan blitzed away with his customary finesse; and Alp underpinned the whole thing with urgent, energising riffs that stimulated the adrenaline glands into over-production – and by the way, never let them tell you that endorphins don’t have a bass line.

Here are some blasts from the quartet’s past. Firstly, 'Dokuz Parça Daha' (‘Nine More Pieces’):

Secondly, a video focussing on the redoubtable Volkan Öktem, who when not displaying his talents as a jazz musician is a deservedly well-known figure in Turkish pop; the pianist in the background is, of course, Genco Arı.

Thirdly and lastly, a recording of Sarp, Alp and Volkan playing together in 2016:

And so the September evening drew to a close, leaving behind it a feeling of euphoria – for us audience members, at least. I later quizzed a resident of the opposite shore (a person who sometimes complains of the noise from the shoe factory across the water) about the concert. ‘Did you hear it?’ I asked. ‘Yes, I did,’ came the terse reply. ‘The noise was … diabolical.’