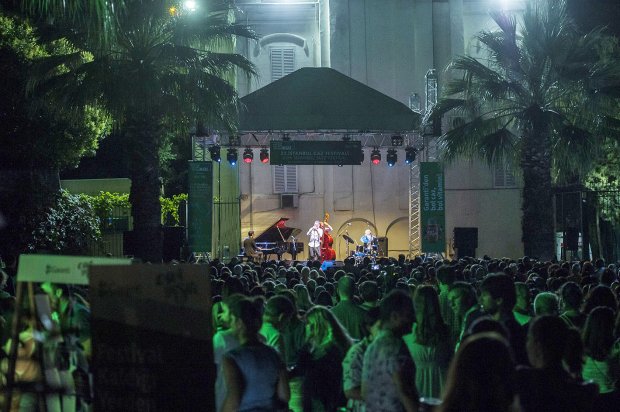 The venue for the third concert I attended during the 25th İKSV İstanbul Jazz Festival was the grounds of the Palazzo di Venezia in Beyoğlu – a building that now does service as the residence of the Italian Ambassador and the Italian Consul-General. (It is not the Consulate itself, as wrongly stated in my previous blog.) Full marks to the Italians for allowing the use of their diplomatic premises in such a worthy cause: it was a privilege to be able to share the wonderful space they have created with its tall, luxuriant, well-established trees. The musicians who entertained us as the sky grew dark on Monday July 2 – and afterwards, when the swallows, seagulls and half-ruined buildings had become invisible – were the Massimo Manzi Trio (featuring the Turkish singer Elif Çağlar) followed by the Fabrizio Bosso Quartet.

By ‘half-ruined buildings’ I do not, of course, mean those of the diplomatic compound itself, which are very fine architectural works: rather, I mean the most attractive semi-ruin that was visible to the right of the stage, beyond the high railings that separate this piece of Italy from the rest of İstanbul. Here a crumbling brick wall was surmounted by an attempt at an attic room with a half-collapsed roof, tottering on skewed wooden supports. What a fine example of that refined aesthetic that is becoming all too rare in İstanbul nowadays – neglect! Later I will return to this inspiring topic. First, however, I must describe the music. 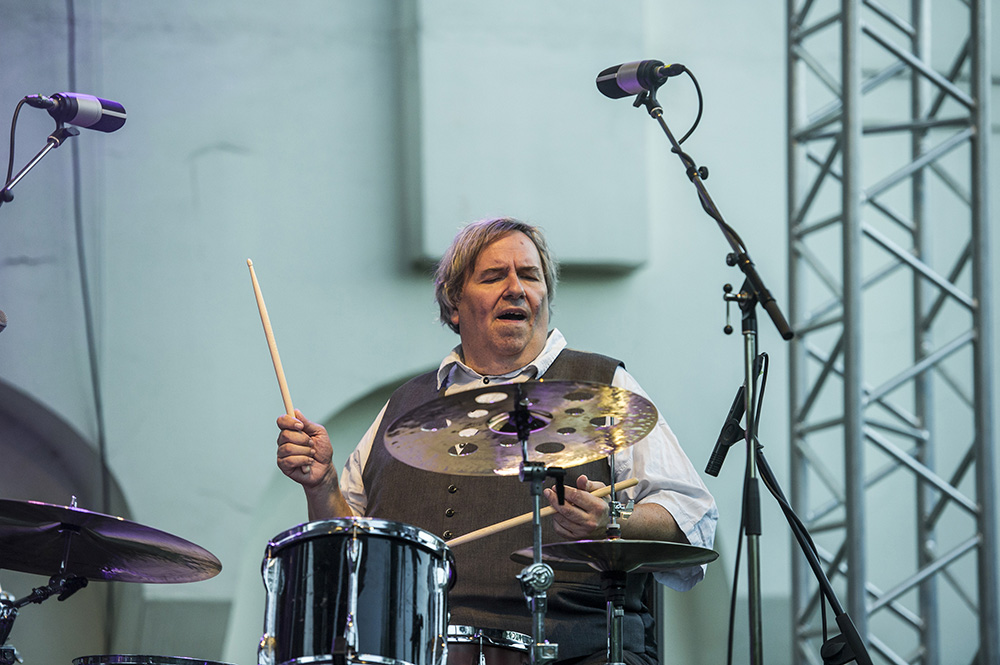 The jazz drummer Massimo Manzi, born in Rome in 1956, has a lovely smile and a manner that is molto simpatico, putting the audience in a good mood immediately. The other members of his group were Domingo Muzietti on guitar and Massimo Giovannini on bass guitar. It was, however, the Turkish singer Elif Çağlar who stole the show. Judging from the close rapport between her and her fellow-performers, they must have been working together for quite a while. 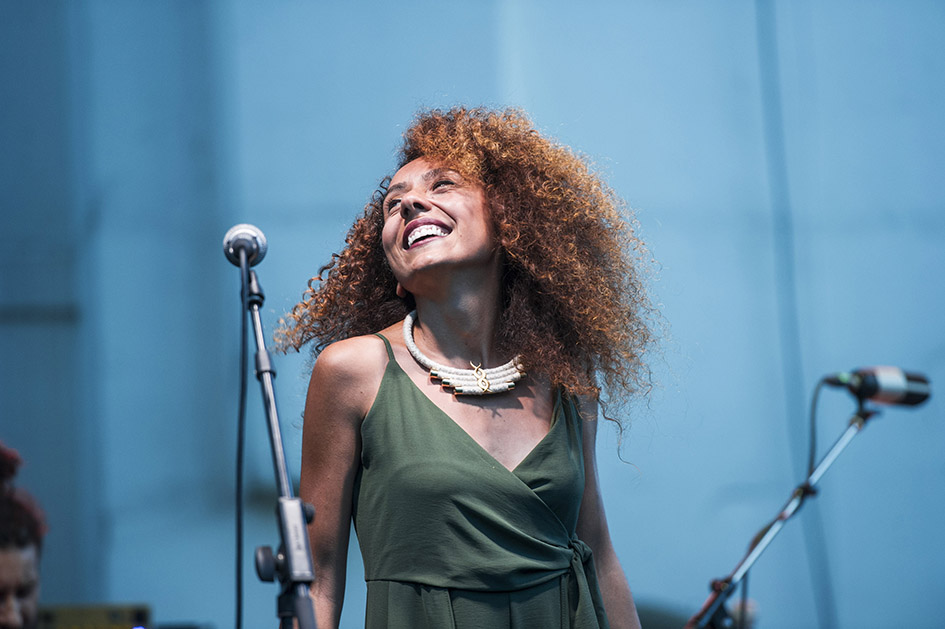 Ms Çağlar has excellent diction, which allows one actually to hear the words she is singing: this is all the more to her credit as she is singing in a foreign language (English). She is also a composer in her own right, having studied composition at Bilgi University. Her time there was followed by a master’s degree in jazz performance at Queens College, New York. In this recording of her song ‘Grown Up’, one of the musicians accompanying her is the trumpeter İmer Demirer, mentioned in my blog on the opening concert of the festival.

Her voice, though powerful, has a most pleasing sweetness in the upper register, and this was especially evident in ‘Since I Fell For You’. Unfortunately I have not been able to find a recording on YouTube of her flights to the top of the range, but here is a video of a performance of ‘The Books’ that showcases her softer qualities:

It is the electrifying sound of Fabrizio Bosso’s trumpet-playing that dominates my recollections of the second half of the programme, though the other three members of his group – Julian Oliver Mazzariello on piano, Jacopo Ferrazza on double bass and Nicola Angelucci on drums – were all superb. Fabrizio Bosso’s musical education took place at the Giuseppe Verdi Conservatory in Turin, followed by St Mary’s College in Washington DC. Without further ado, I will invite you to sample some of his performances. The first one is at the 2017 Jazz Festival in Jarasum, South Korea, where he is playing with the same group he had with him on Monday night:

It seems the festival is held every October on the island of Jaraseom in Gapyeong-gun, Gyeonggi-do. Get yer mouth round that one!

Now for something slower and schmaltzier – ‘Georgia on my Mind’, from the album You’ve Changed:

And here he is with his group once again, in ‘The Nearness of You’:

By now you will have realised that Julian Oliver Mazzariello, the pianist, is quite exceptionally talented. 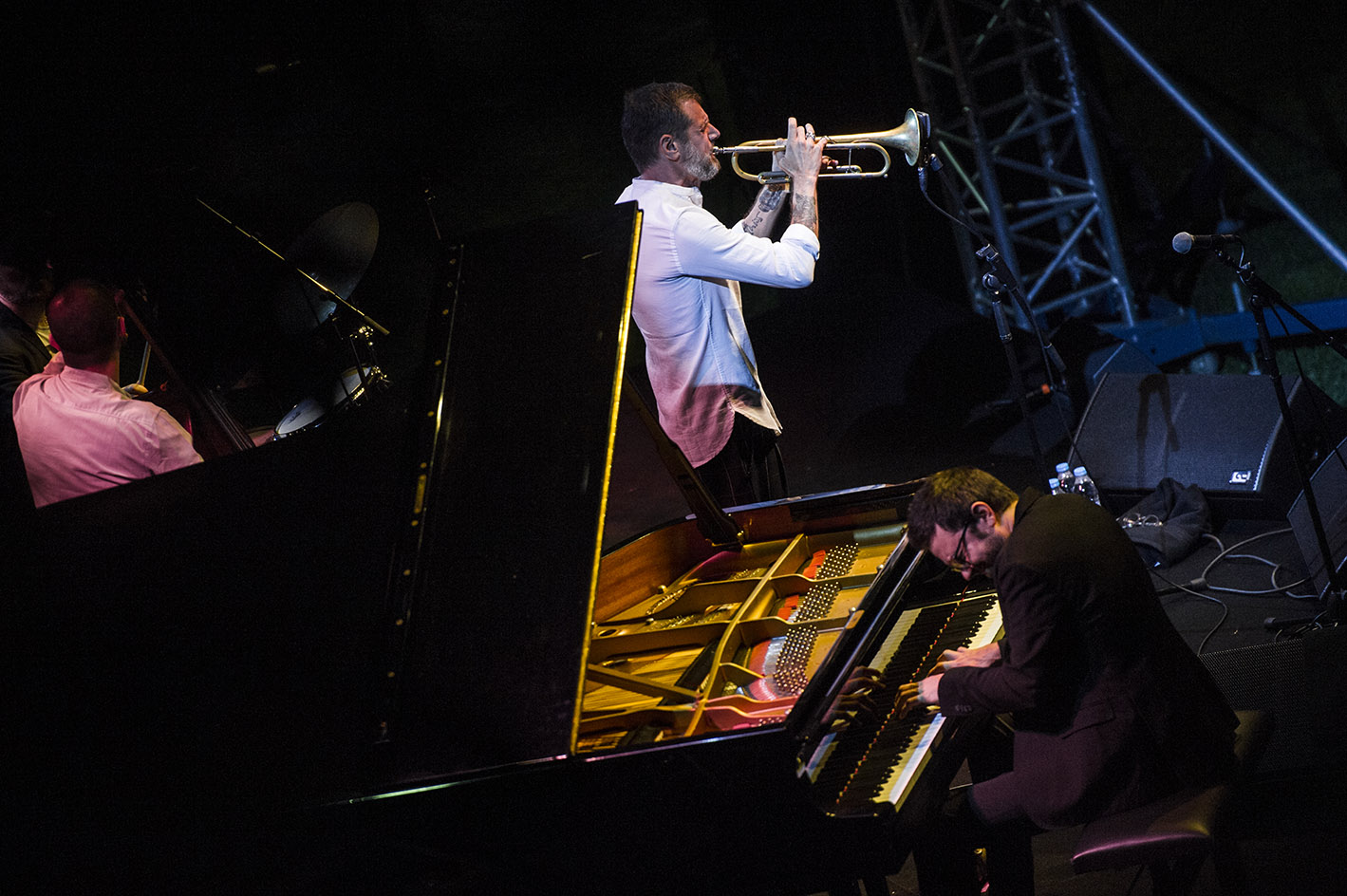 Mazzariello was apparently born in London, the son of an Italian father and a British mother. Here is a video of him performing a laid-back duet with Fabrizio Bosso:

In the performance on Monday we heard more of this pianist’s musical sensitivity in a solo at the beginning of ‘Tenderly’. Later on in the piece, when a rhythmic honking of seabirds interrupted a quiet passage, Mr Bosso acknowledged their contribution by falling silent and letting them take centre stage before picking up his trumpet once again to impress us with a display of rapid-fire triple-tonguing (takata takata takata…). What an astonishing technique the man has! Those effortless glissandi – oh dear, oh dear.

But the most amazing synchronous interjection from the outside world came about in ‘The Shadow of Your Smile’, during which the call to prayer began from the mosques all over the valley in which the Palazzo di Venezia sits. Just as the piece was finishing, the voice of the muezzin in the mosque nearest to us came to rest on exactly the note the jazzmen were playing. Personally, I think it was a sign that something or someone thought they were on the right track. After the concert my companion, who has been to a lot more jazz concerts than I have and listened to just about everybody under the sun, told me that Fabrizio Bosso and his group were the best jazz ensemble he had ever heard.

Now to the architecture. The Palazzo di Venezia, mentioned in my previous blog, is described in more detail in Patricia Daunt’s book The Palace Lady’s Summerhouse. The building we were actually looking at during the concert (it was right behind the stage) was the Italian Consulate, the work of the Swiss-Italian architects Gaspare and Giuseppe Fossati. (Was it just one of them, or both? Perhaps someone can enlighten me.) These were the brothers who built the Russian Consulate, the side of which I looked out on for 33 years from my flat behind İstiklal Caddesi – again as described in my previous blog.

May I be forgiven for expressing admiration for the wooden house that graced the street above the compound, overlooking it? Propped up by the more recent buildings to either side, it will probably survive for another hundred years or so unless it falls victim to ‘Urban Renewal’, that scourge of destruction that has blighted the İstanbul landscape in recent years – to the horror of recidivists and admirers of the makeshift and the amateur like myself.

An anecdote: some years ago, while on a bus journey from İstanbul to London, I sat next to a Turkish boy of 14. When the bus reached Venice, we were allowed out for a couple of hours to stretch our cramped limbs. Then the time came to resume our journey, and my travelling companion exchanged impressions of the city with another Turkish boy on the bus. ‘Did you like it?’ he asked. ‘No,’ returned the other boy. ‘They ought to pull it down and build something really modern.’ My companion enthusiastically concurred.

Before the whole of this delectable neighbourhood is flattened to make way for mega-residences to house our Elders and Betters, I would like to present to you a couple of videos that show you one of my favourite parts of İstanbul: Yedikule, Silivrikapı and Mevlanakapı, three age-old residential areas hemmed in by the Byzantine walls that stretch from the Sea of Marmara to Topkapı (the quartier, not the palace). Quite a lot of Italian people used to live in Yedikule, apparently, along with Greeks and Armenians.

Part of the green expanse of market gardens that used to provide a breathing space just inside the city walls at Yedikule has already been bulldozed to make way for the Yedikule Konakları (‘Yedikule Mansions’), with their tasteful and inventive architecture that fully respects the status of their surroundings as a World Heritage Site. The market gardens had the added disadvantage that they not only guaranteed employment for the dedicated gardeners themselves (many of whom hailed from Cide, on the Black Sea coast north of Kastamonu), but also provided urban residents with fresh, healthy salad ingredients and vegetables at an affordable price, thus representing a most noxious and deplorable threat to agribusiness. I believe a good number of members of parliament live in the Yedikule Konakları, and this is no doubt another reason why the area is now seen as ripe for gentrification. Long live progress!

Here are two videos of Yedikule as it is today, both with Turkish soundtracks:

And now a blast from the area’s past. The opening shots – aerial photographs – show how much empty space there used to be inside the city walls. People used to go there for picnics and buy a couple of the famous Yedikule lettuces to enhance an alfresco meal:

Whether or not the plan to bulldoze the priceless and irreplaceable vernacular architecture in Mevlanakapı (further along the walls towards Topkapı) has gone ahead I do not know. However, this video of the inspired new residential development that is to replace it – if indeed this has not already happened – shows what the Municipality of Fatih has in mind for this reprehensibly backward part of the world.

But I do not wish to depress the reader unnecessarily. All I can do is invite you to find your way to Yedikule, Silivrikapı and Mevlanakapı and wander around. See these places before time’s jackboot crushes them underfoot. Meanwhile, listen to some recordings of Fabrizio Bosso and think of seagulls perching on the chimney pots of old İstanbul…