Restoring the stained-glass windows of the Crimean Church in Galata

By Caspar Bigham with photographs by Monica Fritz | July 4, 2018 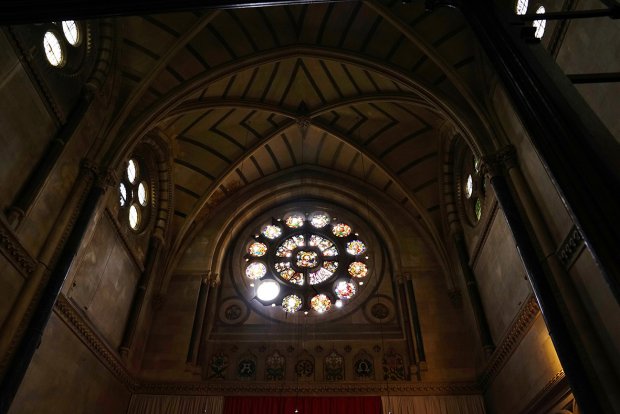 To enter Christ Church, hidden in the backstreets surrounding Galata Tower, is to be suddenly transported to England by its neo-Gothic style. Known as the Crimean Memorial Church, or simply the Crimean Church, it was built in commemoration of those who fell in that war – a decision taken by the British ambassador Lord Stratford de Redcliffe with the additional aim of providing a place of worship for the small but growing Anglican community in 1850s Istanbul. Designed by George Street, the brain behind the Royal Courts of Justice in London, the church was consecrated in 1868, though the magnificent rose window was not added for a further decade. Its position at the east end of the church is traditional – the east, where the sun rises, being associated with light and purity, so that worshippers entering at the west end may leave their sins behind at the door.

From the 1920s onwards the window, along with the church itself, was in a state of steady decline and by the 1960s had been almost completely abandoned. It was eventually deconsecrated in 1973. During this time much was stolen from the inside, and the rose window – far more fragile than the building housing it, and with the the lead holding the glass in place growing increasingly soft – sustained significant damage. The empty building was often used as a place to congregate in ways very different from the original intention, and sometimes by those who saw it as a perfect target for their slingshots.

It was only in 1989 that Ian Sherwood, then vicar of the church at the nearby British consulate, fought for its preservation and prevented it being handed over to the municipality. After a dramatic campaign – including a period of 40 days, appropriately, during which he slept there – he set about the long process of turning it back into a living church.

By this time the rose window was largely lying in shattered pieces on the floor. Though fragments were returned as well as could be managed to their original positions, much of the glass was missing. And restoring the window was not a priority, owing to the vast amount of work needing to be done in other areas. The church was in a state of total disrepair, not having been used for over 60 years – so long that when the electricity was turned on there was an explosion owing to a change in voltage.

To prevent the church from becoming a nesting place for birds, a pane of glass was placed behind what remained of the entire window – though there now seem to be some new, but welcome, members of the congregation: a pair of chickens (Meghan and Harry) and a cat are fondly greeted. The restoration is at a stage where the window can at last become a priority, and a craftsman has been found who is prepared to restore it for a more reasonable fee than the amount quoted 25 years ago. As the church receives no funding from the Turkish state, all costs of the restoration have been met by donations. The artist tasked with this undertaking, Yadigar Alkan, has now completed the first of four commissioned windows, showing St Peter, and this has been returned to its place, where it waits to be joined eventually by the rest. The process has not been easy, especially as the original drawings of the designs for the window, held in London by the original designers, Clayton and Bell, were destroyed during the Blitz. 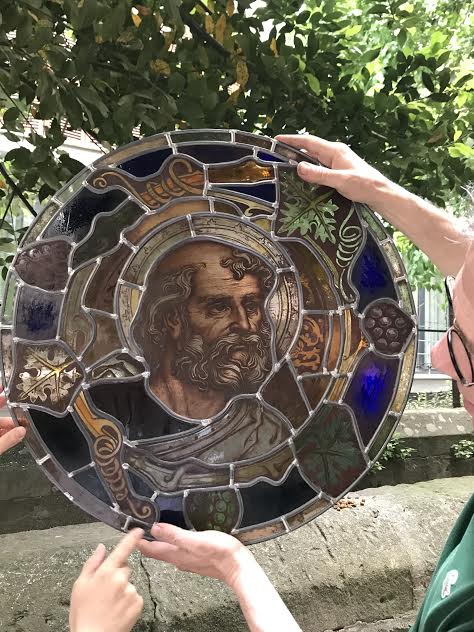 The complicated business of restoring the rose window began with its carefully dismantling. Then whatever could be saved of the old glass, pieces broken into only two shards, were put into new lead and baked at 570 degrees celsius. This is the first stained-glass window Yadigar has made for a church, and it is of an exemplary standard – unlike one of the side windows, which was smashed and replaced several years ago with one looking markedly different, having been baked only on one side. The second window has now been handed over to Yadigar and is proving even more of a challenge, for the facial expression is not intact and it is exceedingly difficult to find glass like that used 150 years ago. The central window, depicting Christ, will be taken to Bologna where Yadigar is in contact with a renowned stained-glass restorer. She plans to see what can be learned from this master.

Broken pieces too damaged to be returned to the window will be displayed as part of an exhibition planned to take place in the church on the work's completion. As each window is finished, it is dedicated to the donor who made its restoration possible, and with the help of such generosity it will not be long before the Crimean Church’s windows have all been replaced. In the process not only will the last vestiges of the church’s long period of dereliction have been removed, but the project will also have contributed to moving the arts in Turkey in a new direction.