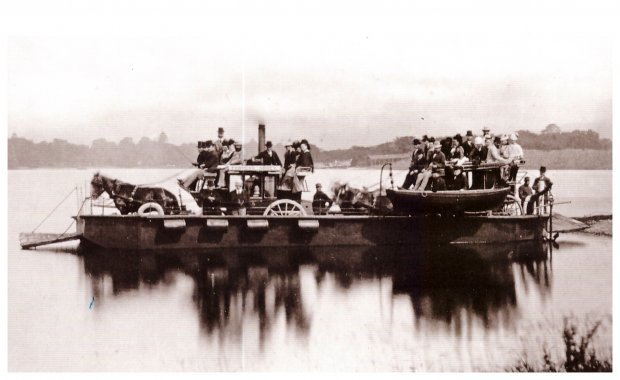 This photograph of a ferry carrying visitors to Furness Abbey in Cumbria comes from British–Ottoman Relations through the Yıldız Palace Photography Collection, launched at Olympia on the first day of the London Book Fair yesterday. The photographs were collected by Sultan Abdulhamid II (1876–1909) and are published by the Sultan Abdulhamid II Application and Research Center in Istanbul’s Yıldız Technical University. The Sultan amassed 36,585 photographs in 911 albums showing scenes from around the Ottoman Empire and abroad. The ones published here compare scenes in Britain with those in Turkey, matching, for example, the Bosphopros waterfront and the Thames of that time.

Sultan Abdlilhamid II was an enthusiast of photography and had dark room facilities at the Palace from where almost identical sets of around 50 albums, bound in dark green morocco, with more than 1800 albumen prints, were presented to both the British Museum and to the Library of Congress in 1894. The photographs had been sent to the British Museum along with 255 books in 12 cases, through the Britsih Ambassador, Sir Philip Currie. Currie reported that they had been 'presented by the Sultan to Her Majesty's Government for the use of the British public in order that it should be generally known in England what progress has been made in literature and science in Turkey since His Majesty came to the throne, and to show how greatly he is interested in the advancement of learning and education in his Empire’.

Education in Turkey was a concern of Maureen Freeley, president of English PEN. On the opening day of the Fair she spoke about the situation in Turkey where 5822 people have been dismissed from universities, and 30 publishers and 18 magazines have shut down.

Elsewhere at the Fair, publishers were announcing books to look forward to this year. I.B. Taurus, for instance, was keen to promote The Passion: Football and the Story of Modern Turkey by Patrick Keddie, while Historic England has a new book, The British Mosque, an architectural and social history, by Malcolm Shifrin, author of Victorian Turkish Baths.