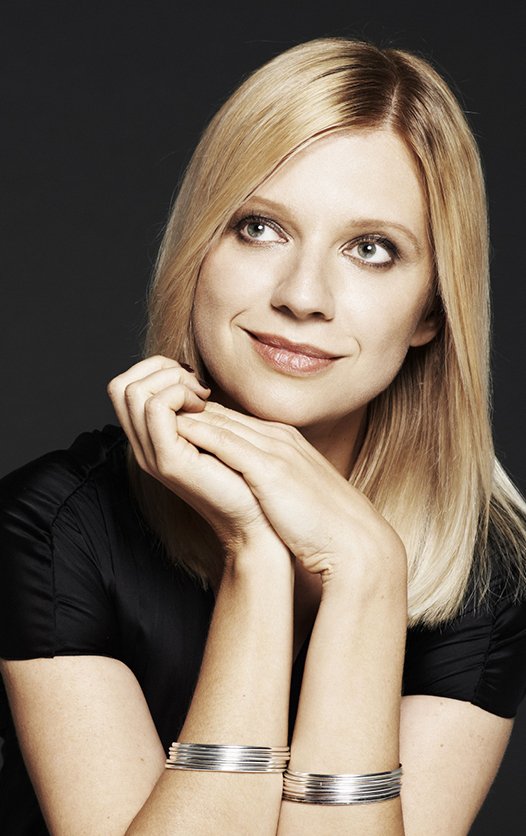 And so the new season gets under way in the Istanbul music scene. Hayırlı olsun (‘May it be productive of good’ – and no broken fingers, cracked clarinets, or wrecked pianos.) 2020 is a real snorter of a year from the astrological point of view, and I am wondering how the planets will affect musical performances and performers when Pluto and Saturn, the big baddies of the zodiac, line up with Jupiter in the sign of Capricorn – an extremely rare event – in January. For the moment, all one can do is observe the contents of the cauldron hotting up and hope the witches’ broomsticks are fitted with ejector seats: things in the kitchen could get quite explosive when the aforementioned unholy brew hits the firmament.

The first concert in the season of mists and mellow fruitfulness, and also the first in the new series of Istanbul Recitals at The Seed (the concert hall attached to the Sakıp Sabancı Museum in Emirgan), was given by Valentina Lisitsa on October 12. Lisitsa (photographed here for Decca by Gilbert François), I am reliably informed, means ‘fox’ in Russian. Her build-up was certainly an impressive one: the first sentence in the programme notes announced that this lady, dubbed the ‘Queen of Rachmaninov’, has over half a million subscribers on YouTube, and that her videos have been watched over 200 million times. An Aries born in Kiev to a family hailing from Odessa, she  attended the Kiev Conservatory. It was here that she met her future husband, Alexey Kuznetsov, a pianist who is also her duo partner; it was at this time, too, that she was obliged to let her interest in chess (a fascination shared by Sergei Prokofiev) take a back seat, thus allowing her to concentrate single-mindedly on her music. In 1991 the couple moved to the USA, where she continued her training.

She first achieved fame in 2007, when she posted a video on YouTube of herself playing a Rachmaninov Etude that ‘went viral’, as they say. In 2012 she gave a recital at the Royal Albert Hall, later released as a CD, that met with a similarly enthusiastic reception online; subsequently, she made a series of recordings of Rachmaninov pieces for the Decca label. The following year she played with the Berlin Philharmonic and appeared in the BBC Proms Concerts. I have read that on one occasion she played the whole of Rachmaninov’s works for piano (including the concertos, I believe) with the Spanish National Orchestra in a single evening; she is obviously as tough as nails – though perhaps tuning pins would be a more appropriate comparison. Apart from Rachmaninov, she has also recorded works by Chopin, Liszt, Scriabin and Philip Glass.

Ms Lisitsa has in the past been involved in controversy surrounding her political views on the situation in Ukraine (views that I will not go into here as this is a musical blog), and on one occasion a concert she was due to give in Toronto was cancelled on account of her politically-motivated tweets.

Here is a video in which she describes her life as an itinerant pianist:

The following video has some close-ups of her hands as she plays a transcription of Bach’s Prelude in B minor, BWV 855a. I am not such a purist as to condemn the use of rubato in Bach’s slower pieces, and Ms Lisitsa seems to concur with that view:

The concert on October 12 opened with a little-known Beethoven sonata – No 11 in B flat major, dedicated to Haydn. Here is the sonata in twin performances by the French-Canadian pianist Louis Lortie and the American Stephen Kovacevich (who played for us in Emirgan last April), with the score: I especially like Lortie’s relaxed approach to the slow movement, which starts at 07:31. (I think his last movement is way too slow, however.) The Kovacevich performance that follows is – for good or ill – highly accentuated. There is a good analysis of the piece in the notes below the video (available on YouTube):

Valentina Lisitsa’s choice of this work as an opener somewhat bemused me: every Beethoven sonata has its fans, but this particular one does not seem to me to hold much interest apart from some interesting harmonies at the beginning of the development section in the slow movement (this happens at 11:03 in the above recording by Lortie). I admit, too, that the initial theme of the last movement has a certain naïf charm. It became apparent early on that Ms Lisitsa has a habit of making sudden descents in volume (subito piano – ‘suddenly soft’); these, however, are sometimes so mousey-quiet as to render the melodic line scarcely audible. At other times, however, her treatment of the keys was so ‘robust’ as to be almost brutal; I thought, in fact, that there was a need for greater evenness of touch, especially in the slow movement. Also, although I appreciate that Beethoven is not Haydn, and therefore strict control of the resonance is less called for, there was a certain amount of over-pedalling.

This was followed by Chopin’s Scherzo No 2 in B flat minor, which we had previously heard in the recital by Yeol Eum Sohn in May. (A description of the work appeared in my blog on this latter concert.) Ms Lisitsa’s pedalling was not so much of a problem here; there were some nice touches in the quiet passages, and although once again she occasionally let the melody die an untimely death, I admired her sensitive musicianship and her sense of timing.

Here, I have to say that Valentina Lisitsa attacked the piano with such force that I was afraid for the instrument: there were times when she seemed to restrain herself only at the last minute from delivering what in professional wrestling would be called a ‘forearm smash’. Also, I wished she had chosen less hectic tempi, as her upwardly-sweeping arpeggios did not always come to rest on the right note: she would have had a better chance of clearing the bar if the run-up had been a little less helter-skelter. The performance certainly had heart, but the lack of control made it, I fear, more than a little uneven. The over-pedalling, too, was a constant problem. Nevertheless, I enjoyed the glassy feel she gave to the quiet bits in the first of the preludes; I thought her rendering of the third (the B minor) was genuinely evocative of the Russian spirit – though my half-Russian companion disagreed with me on this – and the fifth (the C sharp minor) had real drama: her octaves carried both weight and meaning.

The first of the above-listed preludes, Op 32 No 5 in G major (which reminds me strongly of Ravel, by the way), is available on YouTube in a recording by the lady herself:

Now, here is Op 32 No 12 in G sharp minor, from Ms Lisitsa’s DVD entitled ‘Black and Pink’. I must warn readers of puritan leanings that in this video she is wearing a frilly pink party dress; the fuzziness of the camera-work is no doubt intended to add to the ‘chocolate-box’ atmosphere:

Here she is again in Op 32 No 10 in B minor, this time wearing what looks like a riding outfit – the whip is probably propped up against the door, partially visible on the left. It is said that Rachmaninov was inspired to write this piece by a painting entitled The Homecoming, and that in it he expresses his homesickness for Mother Russia. However, I urge you to ignore the overplayed pessimism (‘the abyss’, etc.) of the notes under the YouTube video: composers are surely allowed to write melancholy music without being accused of encouraging people to do away with themselves:

For the last three of the six Rachmaninov preludes Ms Lisitsa played, I will – if I may – showcase the formidable talents of Emil Gilels, whose performances are (for my money) authoritative versions against which others may with confidence be measured. So here he is playing Op 23 No 5 in G minor, Op 3 No 2 in C sharp minor – full marks to him for taking his time with this gutsy little number, as indeed Rachmaninov himself did in his own recording of it – and Op 23 No 2 in B flat major. Although the sound quality in these videos is not great, I love the comment under the YouTube version of the first one: ‘Gilels attacks the piano like it owes him money.’

Valentina Lisitsa ended her recital with Franz Liszt’s Spanish Rhapsody (S254), written in 1863 and dedicated to the Empress Eugénie, Napoleon III’s Spanish wife. The performance by Ms Lisitsa that follows is unfortunately divided between two videos; it is, however, a good illustration of her ‘quick death’ approach to arpeggios and rapid-fire chords:

As an encore, she played us Tchaikovsky’s Barcarolle: June from The Seasons. In this piece, she demonstrated that she does not invariably hammer the piano: she can also caress it, as she does in the following video:

I thought Valentina Lisitsa came across as a very likeable, genuine person with obvious pianistic talent and a good deal of musical sensitivity. It is a pity, however, that she seems to have sacrificed accuracy for the sake of a velocity (or rather, perhaps, a ferocity?) that is not, frankly, absolutely necessary. A little more attention to the question of maintaining the audience’s ability to hear the melodic line, and a little less pedal, would have improved matters, too; nevertheless, her virtuosity is unquestionable.

Finally, I really must congratulate the organisers of the Istanbul Recitals on their decision to make a pre-concert announcement telling the audience to turn off their mobile phones. True, they might have gone on to threaten violators with some dire and terrible form of punishment (such as having the offending device temporarily confiscated, resulting in withdrawal-induced paroxysms, frothing at the mouth and eventual catalepsy), but there is still time for my repeated admonitions to take effect and sterner measures to be adopted. For the first time since I started attending these concerts, no ring tones interrupted the performance, and there were no audible conversations, either. Long may it – and these excellent recitals – last.