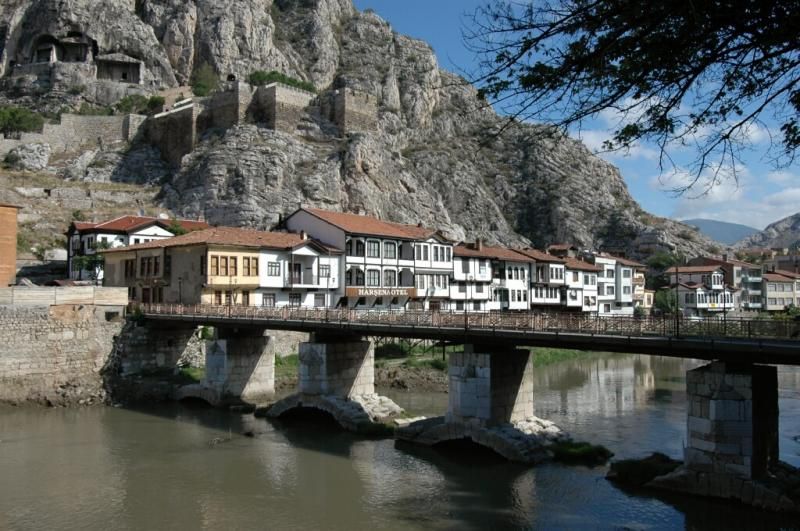 This historic riverside city was ruled by the ancient kings of Pontus, who are buried in rock tombs in the cliffs that rise above the narrow valley. The geographer Strabo was born here in 60BC, and in the 15th and 16th centuries Amasya became the home of Ottoman princes, as John Carswell explains in Cornucopia 11. Here they served as governors, learning their craft and attracting artists and musicians to their court. Today, the attractive Yalibolu (waterfront) houses beside the Yeşilırmak river have been restored, some turned into cafes and hotels. Older still are the 13th-century Seljuk and Ottoman buildings predating the conquest of Istanbul. The modern city is the provincial capital with a population of around 350,000, and the region is known for its apples.

There are a number of venerable mosques, such as the 13th-century Seljuk Burmali Mosque and the Bayezit II Mosque from 1495. Outside each is a Şirdivan, a roofed fountain with Koranic inscriptions in the ceiling, where scribes, clerics and palace ministers met. Some of the old houses have been turned into small museums, such as the Şehzadeler Museum, which reflects the life of the Ottoman princes in the city, and the Şerefeddin Sabuncuoğlu Medicine Museum, in a hospital building dating from 1309, while the Harezanlar Museum shows the traditional way of life in the 19th-century city and has a ground floor art gallery. The main, Amasya Museum contains mummies of Ilkhanli rulers .

Amasya is 125km south of Samsun, and is served both by rail and with an airport.