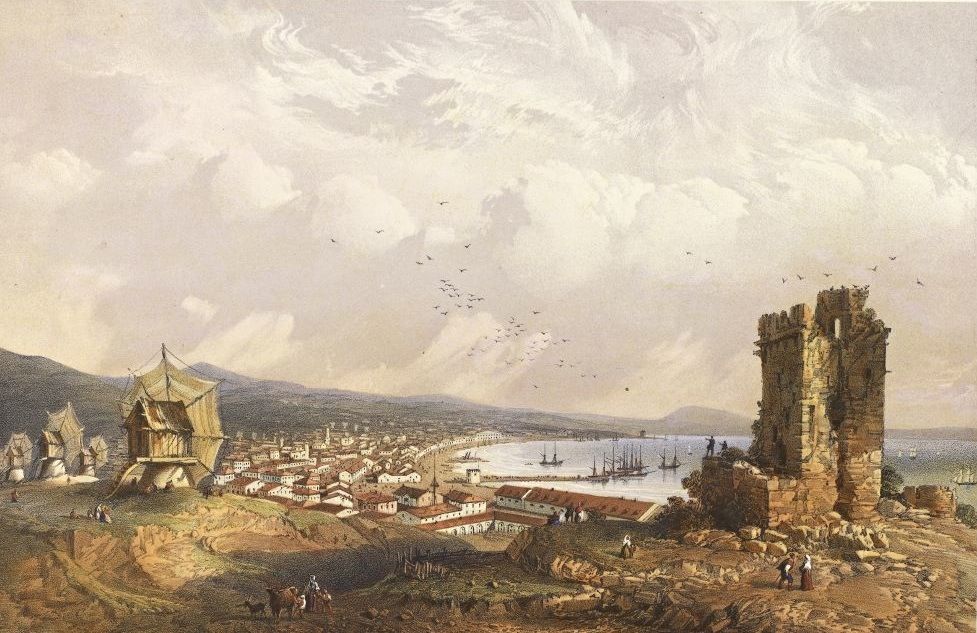 Now a pleasing backwater with a great seafront railway station and a grand museum dedicated to its most famous son, the painter Ivan Aivazovsky, Feodosiya – or Kaffa, as it was known to the Genoese – was once a bustling port. It gave its name to the dwarf red tulip with pointed petals [(Kefe Lâlesi)](/magazine/articles/the-painted-garden/) that grew wild in Crimea and became the Ottoman tulip, sparking the tulip mania of the 17th century. Feodosiya is one of Europe’s oldest cities, first settled by colonists from Miletus in the sixth century BC. Under Genoese then Ottoman control, Feodosiya flourished from its access to the Sea of Azov, the fertile interior and Central Asia’s trade routes. Today it is mercifully unexploited, and makes a good base from which to explore the dramatic coastline captured by Aivazovsky, as well as its historic hinterland. The traveller Karl Koch visited the city in 1840, and was full of praise for the place which he visited as he travelled west from Kerch to Simferopol. Perhaps one reason for his good mood was his hotel. 'The sun was just setting when I arrived in Theodosia, and again found a comfortable welcome in a German inn. For the first time, after many months, I saw a white linen sheet on my bed, and a pillow-case. In Kertch I had not fared so well, although there I had enjoyed a mattress and a leather-covered pillow.' Koch was particularly struck by Feodosia's situation. 'Theodosia is incomparably more value than Sebastopol for commercial purposes. A convenient road lead to the interior of the peninsula, which is more accessible to cultivation in the east than in the west. The Don pours its waters into the neighbouring Sea of Azov; the mouth of the Kuban is still nearer.' [Koch's *Crimea*](http://books.google.com.tr/books/about/The_Crimea_with_a_visit_to_Odessa.html?id=EFwBAAAAQAAJ&redir_esc=y)

What is now a sleepy provincial seaside resort was once the powerhouse of Black Sea, source of tulips and slaves.

The first thing to explore is the long promenade. At the western end is the Aivazovsky Museum, devoted to the great maestro’s seascapes, which can now fetch two million dollars. His mother’s small home behind the museum is now a modest guesthouse. Not far away, Aivazovsky is buried in a grand tomb next to a fine 13th-century Armenian church, which he restored, and a 17th-century Ottoman mosque.

At the eastern end is the Stamboli Dacha, now an underused restaurant. Built in the Moorish style between 1909 and 1914 by a St Petersburg architect, Oscar Wegener, it was a gift from the Karaite tobacco merchant Joseph Stamboli to his wife. With the outbreak of war, Stamboli sold up and moved to Turkey.

Most of the fortress walls and ancient buildings of Geonese Kaffa (Ottoman Kefe) were razed by the Russians in the 18th century. All that is left of the medieval town overlooking the western end of Feodosiya – known since Ottoman times as Quarantine Hill – is five tall Genoese towers and a few churches.

The Genoese divided the city in two in 1316, keeping the old trading station at its core. Parcels of land beyond were rented to Greeks, Armenians, Karaim (Turkic-speaking Jews), even Muslims, who became self-governing communities. Ivan Aivazovsky is buried below the fortress in an old quarter of town that has the feel of a French provincial town. Next to him is a beautiful 11th-century Armenian church, which he paid to have restored. A few yards away stands the old Ottoman mosque, the Mufti Camii, built in 1623.