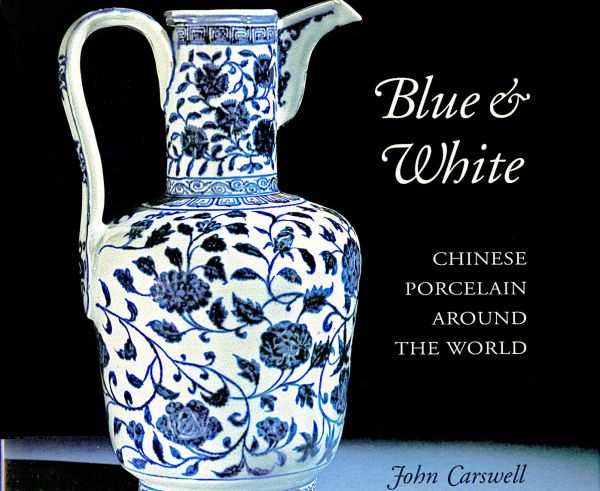 Chinese Porcelain Around the World

‘The eye of an artist applied to the analysis of designs, their development and adaptation’
Julian Thompson

Chinese blue and white porcelain was a unique contribution to the history of ceramic technology. From its development at the beginning of the fourteenth century, and through its technical originality and artistic brilliance in intervening years, it has continued to captivate and inspire around the world. This beautifully illustrated book traces the history and evolution of blue and white in China, first during the Yuan dynasty (12711368), when the Mongols ruled all of Asia creating an environment in which blue and white could travel swiftly as far as the Mediterranean. In the fifteenth century the Chinese became enamoured of their own product, while at the same time the Ming potters were susceptible to ideas and influences from the Islamic world. During the colonial period of the Portuguese, Dutch and British expansion they responded to other commercial and aesthetic pressures. From the sixteenth century onwards, collecting became a passion and was a major influence on the concept of chinoiserie.

John Carswell’s Blue and White is a very different book from any written hitherto on this popular subject. His treatment is eclectic and all the better for it. There is much new material of importance to scholars and Carswell’s approach relies on his own strengths: the eye of an artist applied to the analysis of designs, their development and adaptation; personal experience of the sites which provide the sherd material from which trade routes can be tracked, and of handling the surviving material; and knowledge of the world’s trade routes from the thirteenth to the sixteenth centuries and the contemporary history of the Islamic world.

Carswell’s subject is limited to the production, development and influence of Chinese blue and white made for use outside China in the Yuan and Ming dynasties. Only passing mention is made of the later export trade in the Qing dynasty. Blue and white made for imperial use is specifically excluded, though essential evidence from the Zhushan kiln-site at Jingdezhen is cited in the discussion of Islamic shapes. There is, however, a useful chapter on copper-red decorated porcelain and on the celadon wares exported in far greater quantities than blue and white in the fourteenth and fifteenth centuries.

The early chapters comprehensively cover the two most creative periods in the production of early blue and white: towards the end of the Yuan dynasty in the mid-fourteenth century, and the Ming dynasty reigns of the Yongle and Xuande emperors in the early fifteenth century. The most intriguing new Yuan material is included here a group of blue and white sherds recently recovered from the bed of the Red Sea, the first certain evidence of the maritime transport of highest-quality blue and white at this period. It is hoped further porcelain can eventually be retrieved from this site. These sherds are described and illustrated in detail in a section on porcelain recovered from shipwrecks, and their patterns compared to those on pieces in the Topkap? Palace and from the Ardebil Shrine, now in Tehran. The book would be an obvious addition to a Chinese art library for this section alone.

The Sinan wreck off the southwest coast of Korea, containing an extraordinary group of fine celadons intended for the Japanese market datable to 1423, is well known. Less familiar is a wreck of similar date, also containing celadons, near Trincomalee, Sri Lanka. Carswell describes two tantalising fragments which appear to be contemporary blue and white. Unfortunately the political situation makes further investigation of the site unlikely for the present, but it is just this kind of information which keeps the subject alive.

Carswell is particularly persuasive on the influence of Chinese designs on local manufacture of ceramics in a number of centres in the Middle East. Examples of Syrian blue and white are illustrated, as well as Timurid copies of early fifteenth-century Chinese designs from Samarkand. Perhaps most striking are the Turkish Iznik examples, such as a polychrome dish decorated with a chained leopard, convincingly traced to the design of a fabulous animal on a dish now in the Musée Adrien Dubouché in Limoges. The influence is not one-way. Islamic shapes were adopted in China, and though examples are to be found in Topkapı and Ardebil, larger numbers are in the imperial collections in Beijing and Taipei. These alien forms were embraced by the Chinese court, alongside decorative motifs that were passed in both directions. Sixteenth-century trade with China became dominated by the Portuguese, followed by the Spanish, who opened the sea route across the Pacific from Manila to Acapulco. Carswell devotes a chapter to this first involvement of Europeans in trade with China, discussing Western reaction to this extraordinary new material so much more attractive and durable than any ceramics then known and to the subsequent formation of collections of blue and white by the rich and powerful.

The book is well produced, with lavish illustrations. The editors have, however, allowed the Yellow River to flow westwards towards the Pacific on page 71, and have chosen a miserably restored and rather dull Yuan blue and white ewer as the frontispiece, as well as a downbeat Yuan dish to fill up the half-title page.

The book’s title, too, is open to criticism, following a trend among publishers for titles claiming greater scope than the text delivers, particularly irritating for internet buyers, who purchase without the chance to browse first. None the less, this refreshingly individual and entertaining book is highly recommended to any student of ceramics, Chinese or Middle Eastern, or of the history of world trade.