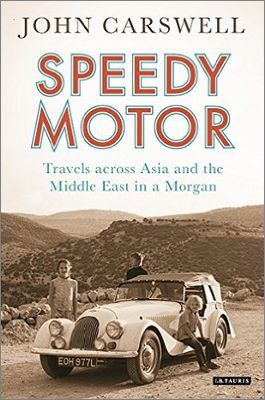 Travels Across Asia and the Middle East in a Morgan

In the summer of 1974, against the backdrop of the Lebanese Civil War, ceramics expert and Morgan sports car enthusiast John Carswell set off with his young family from their home in Beirut on an expedition across Asia and the Middle East. Their mode of transport was their beloved motor car, a Morgan 4/4 four seater, named ‘Speedy’. Following in the steps of Ibn Battuta, their destination was the Maldives, where Carswell hoped to find evidence of the Chinese blue and white pottery which he was researching. The family travelled via Syria, Jordan, Saudi Arabia and Kuwait, from where they sailed to Bombay (Mumbai). What followed was an extraordinary journey across the length of India to Sri Lanka and from there to the Maldives.

Speedy Motor tells, with wit and sparkle, the trials and tribulations of one family car over several decades in the Middle East and latterly Europe. When the family were forced to flee Beirut during the Civil War, Speedy temporarily fell into the hands of Hizbollah but years later ‘he’ was reunited with his family in England. John Carswell’s vivid account of a unique expedition and a much-loved car provides a vibrant portrait of a region in the grip of change.