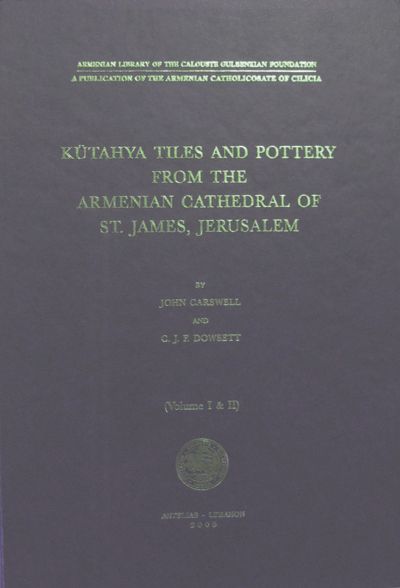 From the Armenian Cathedral of St James, Jerusalem

VOLUME I
The Pictorial Tiles and Other Vessels including a catalogue of inscribed and dated Armenian pottery, by John Carswell and an edition of the Armenian texts with a translation and notes by CJF Dowsett

In the history of Armenian art and culture, the Kütahya tiles and pottery occupy a unique place. These pictorial tiles and pottery, with their rich biblical subjects and exceptional beauty, were made by the Armenians of Kütahya, in the north-western part of Turkey, early in the 18th century, and were donated by pilgrims to the convent of St James, in Jerusalem.

This books was originally published in two volumes, in 1972, by the Oxford University Press. In this second publication, the two volumes appear under one cover. The first part includes the pictorial tiles and pottery and their history. The second part presents a historical survey of the Kütahya industry and a catalogue of the tiles. Both parts are supported and enriched by lists of plates, plans and text-figures, as well as by appendices.

Significantly, several academic centres, universities, museums, organisations and scholars have, in one way or another, contributed towards this publication. John Carswell, a renowned orientalist and Armenologist, has indeed produced a remarkable scholarly work.

This edition is sponsored by the Armenian Affairs Department of the Calouste Gulbenkian Foundation, Lisbon, Portugal.