Store > Books > My House in Damascus 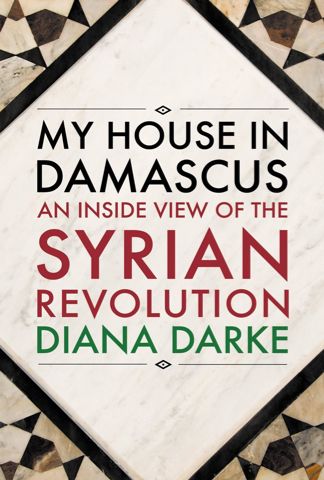 My House in Damascus

An Inside View of the Syrian Revolution

‘This is a love letter to Syria, a story of re-building a beautiful Damascene house as a beloved country falls apart’
Lyse Doucet, BBC Chief International Correspondent

How did Syria’s revolution lose its way? My House in Damascus illuminates the darker recesses not just of Syria’s history and politics, but also of its society and secrets. Using her firsthand experience of Syria’s many, diverse communities, it explains why Syria was always a special case and why the Assad regime was never likely to collapse. Diana Darke became deeply embedded in all levels of Syrian society when she bought and restored a house in Damascus. In September 2012, as fighting broke out, she offered her home as a sanctuary to Syrian friends. Following her experiences and struggles with the realities of life on the ground from the 1970s till the present day, the reader will arrive at his own conclusions about why Syria remains locked in conflict and why an estimated 75% of the population - the ‘silent majority’ - cannot side with either the repressive government or the rapidly splintering opposition.

Diana Darke is a fluent Arabic speaker and has lived and travelled in the Middle East for over thirty years and been a contributor to the Guardian, Financial Times and the BBC.

ASTENE Review: My House in Damascus


This is the third of Diana Darke’s books to be reviewed by ASTENE: The Association for the Study of Travel in Egypt and the Near East. One of these was a travel guide to Syria (banned in that country), a precursor to the current book because it was while researching the travel guide that Darke fell upon the possibility of owning a house in Damascus. The Bradt guide to Syria explained the sights and sites of Syria and how to visit them; this book describes Syria’s heart and character; it is also personal.

The Beit Baroudi is part of an originally much larger Ottoman courtyard house in the Muslim quarter of the Old City, the sort of house Richard Burton would have lived in, and a humbler version of the sort of house from which Burton sent tiles, fountains and artefacts back to Frederick Leighton for his house in Holland Park. Darke’s mission was to restore the Beit Baroudi to its former glory, though retaining the patina of its years in human occupation. It was a lengthy and convoluted process which is described in the book. After the revolution, when Darke could no longer let it to foreign diplomats nor live in it herself, the house became a refuge for several families, because the Old City was the safest place to live during the fighting.

Over four years, starting in 2010, the book had to be revised and re-written as events evolved and played havoc with the tone and balance of what Darke was reporting. Even for those of us with the courage to follow the dreadful events in Syria, there is much in this book one could or should have known but didn’t; the real situation in the Golan Heights; the volume of Iranian pilgrim/tourist traffic; the complexities of the Kurdish situation; the dispersal of the 10% Christian population across the country. They live in small villages throughout the countryside both near and far from abandoned Byzantine towns, not just concentrated in a few strongholds, and they are well integrated in the big cities (though this may all now be in the past). One whole chapter is devoted to the Christian monasteries of Syria, of various denominations and at varying degrees of risk.

By buying a house in Damascus in 2005, with the delicate negotiations which that entailed, and through the subsequent renovations, Darke came as close as any foreigner can to the people of Syria and their true mood and feelings. She has been visiting the country since 1978, and has studied its history. Being there as the owner of the Beit Baroudi enabled her to view the revolution of 2011 and the subsequent civil war from within, in all its immediacy. She continued to visit and travel to and in Syria as late as 2013 on the pretext of Tourist Ministry business, though finally she could only view things remotely from Lebanon. Her analysis of recent events is so much more acute because of her own stake in the outcome. She has pulled no punches in talking about the regime of Bashar al-Assad – the endemic corruption, the nepotism, the inefficiency, how the West was seduced by the Asma PR machine. But if dissent is put down ruthlessly internally, it is not liked externally either so Darke must know that by writing clearly of things about which she feels passionately, she is taking risks. This is no rushed journalist’s cobbling together of dispatches from the front. It is sensitive, steeped in the history and culture of the country and as accurate as any account can be which describes a moving target. The revolution and ensuing chaos and disorder unfold through the lives of the people to whom she is closest: the tour guide; the architect; the bank manager; the young playboy befriended on a plane; the caretaker of the house; the local shopkeeper. Though she wears her scholarship lightly and writes for the non-specialist, there is no doubt that Darke knows her subject when she muses about Islamic art, philosophy and literature. And throughout her time in Damascus the courtyard of her house provides an inner space of calm for contemplation, theorising and dreaming, somewhere to make sense of and accept the ways of the people, and of Damascus as an idea, rather than just a place.

Inevitably the legal position on ownership of the house was never resolved – another moving target. So whether threatened by revolution, changing laws, or opportunistic sequestration by someone in the know, Darke’s struggle for the house and the tale of the Beit Baroudi is far from over.

The book has no index and sadly no illustrations, though there is a good map of Damascus at the beginning. But the Glossary and Dramatis Personae are useful and informative. Darke’s message for readers is that for the sake of those wonderful Syrians who helped her, many now in internal or external exile, all those who love the country must stick by it and keep alive a flame of hope, whatever happens next. Part of any profit from the book is being donated by Darke and her publisher to a foundation to provide Syrians with higher education; one more reason for lovers of the Levant to buy and read this excellent book now.