Store > Books > The Byzantine Monuments of the Evros/Meriç River Valley 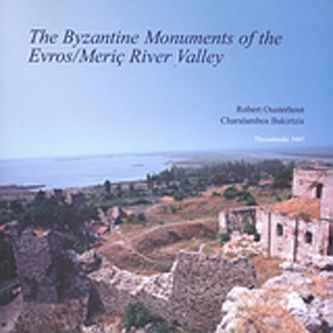 The Byzantine Monuments of the Evros/Meriç River Valley

By Robert Ousterhout and Charalambos Bakirtzis
Published by The European Centre for Byzantine and Post-Byzantine Monuments, Thessalonika, 2007
Out of Print

‘I for one will never visit Thrace again unaccompanied by Robert Ousterhout and Charalambos Bakirtzis.’
Heath W Lowry

The river dividing Thrace between Greece and Turkey today was known in antiquity as the Hebrus River – the Evros in Modern Greek, the Meric in Modern Turkish, and the Maritsa in Slavic languages.

A sleepy backwater today, its appearance gives no hint of its historic vitality. In contrast to its current, liminal situation, throughout the Byzantine period (330 -1453 CE), the valley maintained close cultural connections with the nearby Byzantine capital Constantinople, for which it figured as an important hinterland. Until the nineteenth century, in fact, the river functioned as a thoroughfare, the major transportation artery from the north Aegean Sea into Thrace, connecting to the chief regional city, Adrianopolis (now Edirne, Turkey), with river-going vessels traveling as far inland as Philippopolis (now Plovdiv, Bulgaria).

Historical disjunction. The advent of the railroad in the 1890s signaled the demise of the river network and dramatically altered the economy of the valley. Entire towns were abandoned or shifted as the population moved into closer proximity to the railroad. The port town of Ainos/Enez, for example, had been a transportation hub throughout the Byzantine and Ottoman periods, but when bypassed by the railroad, it declined into a virtual ghost town. Most of its population moved across the river to the previously insignificant village of Dedeagac (now Alexandroupolis, Greece), the final station stop before the railroad turned northward, bypassing the lower river valley…

Seldom does one have the opportunity to review a work co-authored by two universally recognised authorities on its subject. So a most welcome addition to the fledgling field of Byzantine architectural history is this book by Robert Ousterhout, a leading American specialist in Byzantine architectural history at the University of Pennsylvania, and Charalambos Bakirtzis, the distinguished Greek Byzantinist who for the past 30 years has served as director (ephor) of Byzantine and post-Byzantine monuments, first in Kavala, then in Thessaloniki.

Nor do they disappoint: literally from first page to last, this work presents a variety of new materials, supported by equally new and often thought-provoking interpretations. Its most significant contribution is the focus it brings to bear on the important but largely ignored Byzantine monuments lining the Thracian banks of the Meric (Evros) River from Edirne (Adrianople) to the port city of Enez (Ainos) on the north coast of the Aegean. In so doing it highlights the neglected reality that the primary transportation routes of the Balkans lay on a north-south bias, from the mountains (the word ‘Balkan’ itself is a Turkish word for thickly wooded mountain range) down the river valleys to the sea.

This river and its immediate hinterland, which today mark the border separating Greece and Turkey, are home to a variety of unknown and/or understudied sites, which will finally, thanks to this book, receive the attention they deserve from scholars and the public.

The authors also note the manner in which, in the wake of the collapse of the Ottoman Empire, Greek and Turkish scholars have all too often focused only on their side of the border, ignoring the role of the Evros as a major transportation route serving Thrace throughout its history. As they point out, this waterway was, prior to the opening of the railway connecting Istanbul and Thessaloniki in the 1890s, the major transportation artery in Thrace. Along its course goods were shipped south from Filibe (Philippopolis; modern Plovdiv in Bulgaria), through Edirne to the Aegean. Then in 1923 its new status as a border dividing two embattled neighbours brought an end to its traditional role and virtually turned it into a no-man’s-land. Thanks to Ousterhout and Bakirtzis we may now once again begin to see the Meric/Evros River Valley as a whole.

For the Istanbul-based reader this book will provide a handy and invaluable handbook for travel in the region. Indeed, following the order in which it describes the monuments, one might literally visit each of the sites it covers in the course of a long weekend. Leaving from Istanbul, one’s first stop would be Enez (Ainos), at the mouth of the river on the Turkish side of the border (reached via Tekirdag and Kesan), where within the walls of the fortress lie the ruins of the 12th-century Byzantine basilica now known as the Fatih Camii (after the fact that it served as the ‘Conqueror’s Mosque’ from the Ottoman conquest in 1456 until its dome collapsed after an earthquake in 1965). Retracing one’s route to Kesan and then heading west to Ipsala one crosses into Greece and stops at Pherai (Ottoman: Ferecik) for a visit to the magnificent 12th-century church/monastery complex known as the Panagia Kosmosoteira. From there an hour’s drive up the west bank of the river takes you to Didymoteicho (the Turkish Dimetoka), where one of several comfortable hotels will provide a deserved rest after a long day on the road.

The next morning one would set out to see the significant Byzantine remains of Didymoteicho, and then, after lunch, drive a few kilometers to what the authors describe as the 14th-century (built c1331 with ‘later additions’) ruined fortress of Pythion and the nearby village of Prangi, which house the ruins of a 13th-century Byzantine church and two nearby chapels.

It is at this stage of the trip, however, that I find myself in less than complete accord with the authors: specifically their failure to address the possibility that the second phase of the Pythion fortress complex (which they and other specialists all acknowledge was added later) may well be an Ottoman addition, dating from the early 1360s. Bearing in mind Ousterhout and Bakirtzis accept the dendrochronology-supported date of c1331 for the construction of the larger of the two standing towers, then go on to state that ‘the smaller tower and the arched gateway were constructed later, simultaneously with the wall of the inner enceinte’, and also acknowledge that the complex was taken by the early Ottoman March Lord Haci Ilbeg ‘around 1359’, the obvious question that comes to mind is: why were the later additions made and by whom and when? If in fact the later additions are Byzantine (as our authors seem to agree) they were built in a very narrow window between c1331 and c1359. It seems equally possible (indeed probable), that the second phase of the Pythion fortress’s construction was undertaken by its Ottoman conqueror, Haci Ilbeg, prior to his death in the mid-1360s. This would account for the fact that in all Ottoman sources the fortress was subsequently known by some variant of his name – most commonly as Haci Ilbeg Kulesi (Haci Ilbeg’s Tower). As students of Ottoman history know, the presence of such a name is usually a sign that the person so addressed was responsible for a monument’s building – the Ottomans were not prone to rename the existing sites they took. It would be a rare occurrence for a pre-existing site to be named in honour of its conqueror – in fact, no such example comes to mind.

The dating of these later additions might be a moot point had Kuniholm and Striker (the dendrochronologists responsible for taking the dated samples from the older tower) used wood from the later additions (the lack of access at the time of their 1978 visit prohibited this possibility). You might well ask: ‘Why all the fuss? Isn’t this just scholarly nitpicking?’ The answer is: if the dating I suggest is correct, it would make the Pythion fortress the earliest known Ottoman fortification, predating Anadolu Hisarı on the Asian side of the Bosphorus by close to half a century.

My second, albeit minor, point of disagreement with Ousterhout and Bakirtzis stems from their identification of the site of the present-day village of Prangi with Evrenos, home of the father of the early Ottoman conqueror of most of western Thrace and Macedonia. Contra their assertion, there simply is no way to equate the village of Prangi (almost certainly a corruption of Frangi, or Frenk, ie Western European), mentioned in 16th-century Ottoman cadastral surveys as the location of the tomb of Evrenos’s father, a certain Prangi Isa Bey, with the village lying halfway between Didymoteicho and the Pythion fortress. To attempt such a linkage is unsustainable: there are several sites in the Balkans bearing this name, and there can be no doubt that Prangi Isa Bey’s türbe (tomb) is located in the Bulgarian village of Hirçova (also known as Prangi) in the sub-district of Konice in the kaza (administrative district) of Ustrumca, as we have a variety of 16th-century documents placing it there.

This minor error in identification notwithstanding, the Didymoteichon village of Prangi is still well worth a stop for the Byzantine remains it preserves. It also has a late-19th-century Ottoman train station, transformed into an excellent country restaurant where one may have a late lunch before proceeding north to the border crossing of Kapıkule and back into Turkey for the final stop at Edirne.

After a couple of hours’ stopover to visit what little remains of the medieval fortifications, specifically the so-called Macedonian Tower, one returns to Istanbul, having toured the Evros valley in the company of those who know it best. One can only hope this little book is the forerunner of a series of similar studies on other overlooked and understudied regions and their Byzantine monuments. I for one will never visit Thrace again unaccompanied by Robert Ousterhout and Charalambos Bakirtzis.

Heath Lowry is Atatürk Professor of Ottoman and Modern Turkish Studies at Princeton University. and the author of several important books including The Shaping of the Ottoman Balkans, 1350–1550: The Conquest, Settlement and Infrastructural Development of Northern Greece (Bahcesehir University Press)