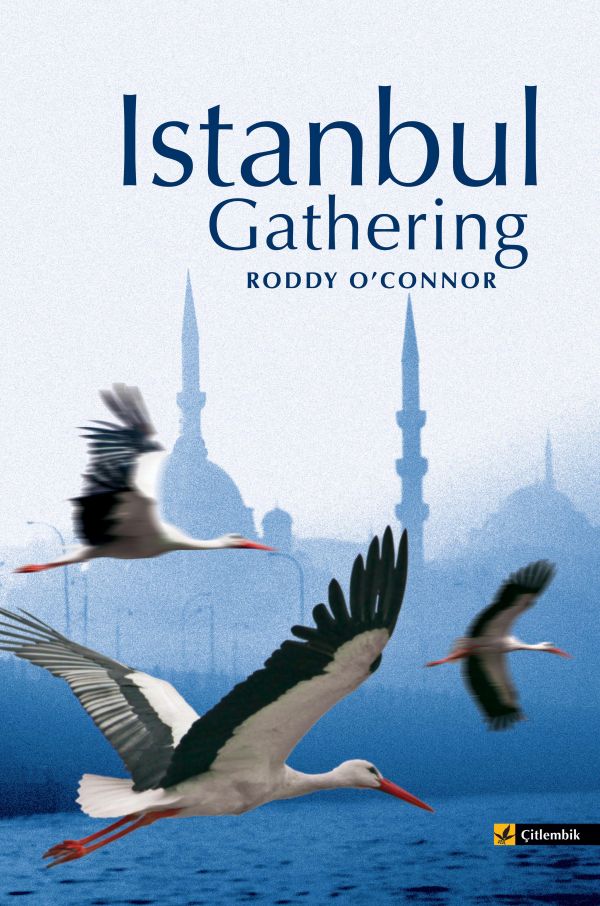 By Roddy O’Connor
Published by Çitlembik

Istanbul Gathering tells the story of a circle of friends in the heady expatriate scene of Istanbul in the sixties and seventies. American protagonist Andrew Malone, a shabby, middle-aged drinker and would-be writer, has returned to Istanbul for the first time in twenty years; his beautiful ex-wife Sylvia and other friends have never left. The narrative follows the characters over the course of a single day as they make their separate ways through the city and reflect on their lives before meeting for a reunion dinner in the old quarter of Beyoglu. This is a story about relationships and lost love; about the nostalgia of growing older and reminiscing on the past, which can never be regained; but also about the city of Istanbul, a place whose rich, many-layered history is kept alive through the shared memories of its inhabitants.

Roddy O’Connor has spent nine years in Istanbul, three in the sixties and six in the nineties, teaching English and French in Turkish secondary schools. He has also spent a dozen years in France and two in Morocco. He received his Ph.D. in French from Princeton University and during the seventies and early eighties he taught nineteenth-century French Literature at the University of Michigan, Ann Arbor, before returning overseas. He is the author of critical studies of Balzac and Flaubert.

Istanbul Gathering is his first novel. He and his wife Olga live in LeFaouet, France.

Leader of the Pack

Many of us who lived in Istanbul in the good old days, (the Sixties and Seventies), have always hoped that someone would immortalise the town we remember by writing the great Istanbul novel. There were enough writers among our crowd here in those times, Turks as well as expatriates, some of whom, like Geoffrey Wolf and Asa Baber, would later write novels set in other places, but never in Istanbul, though form the younger generation Maureen Freely stole the lap on us in her Life of the Party, more aptly titled in its Turkish translation as Eglence Bitti (The Party’s Over).

But now that the party is long over, someone from our gang has finally come through with the novel we have been waiting for, and this is Roddy O’Connor with his Istanbul Gathering, subtitled “A novel of contemporary Lives in an old town”.

Like all of us who left Istanbul, or tried to leave, Roddy kept dreaming about the old days, and he has now distilled his memories, like the famous Hill Cocktails of Robert College, pouring them out for us in Istanbul Gathering, an intoxicating book.

Survivors will have fun recognising the various characters - until we realise that the madman misbehaving so outrageously at Taverna Bohem is our former, unreformed self. All but one of the nine chapters are named for characters in the novel, the exception being “Bonjuk”, the meyhane in Beyoglu where everyone is gathering for a reunion to welcome back Andrew Malone (also known as Balone, Maloney, the Malone Ranger and Miss Maloney Hearts), the protagonist to whom the first, middle and last chapters are devoted.

Malone has been gone from Istanbul for twenty years, and the other characters, including his former wife Sylvia, are looking back into the night of time as they move in their separate ways to Bonjuk, where the old gang will be together again, if only for a few hours. Everything they think and do on their way is set against the background of Istanbul, whose powerful presence is always there, particularly for Malone in the opening lines of this moving, funny and beautifully written novel:

“For how else to express the exhilarating rush he felt as he stepped from the bejewelled and aromatic corridor of the Egyptian Spice Bazaar and into the sunshine blazing along the esplanade in front of the Yeni Cami and over the Galata Bridge, the ferry landing at Eminönü and the lower reaches of the Golden Horn, the distant Asian shore of the Bosphorus lost in a fiery glare. Oh, to be in Istanbul now that April’s here, for as sure as it was April, here he was, as if by the act of willing it, and the twenty long years dividing him from this city and his youth had vanished at a stroke and he found himself again as if completed in this vibrancy of life…”

That’s how it was, and how it still is, and Roddy O’Connor has caught it on the wing.