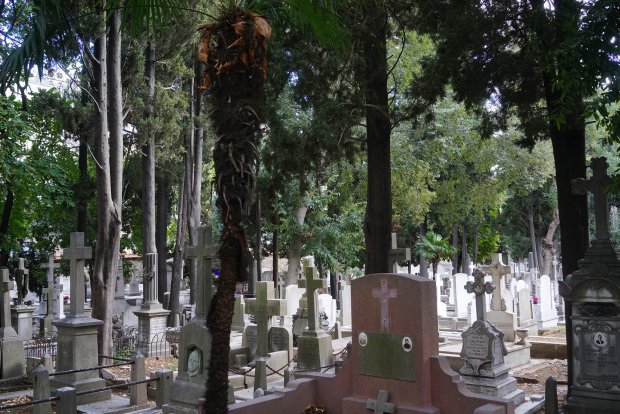 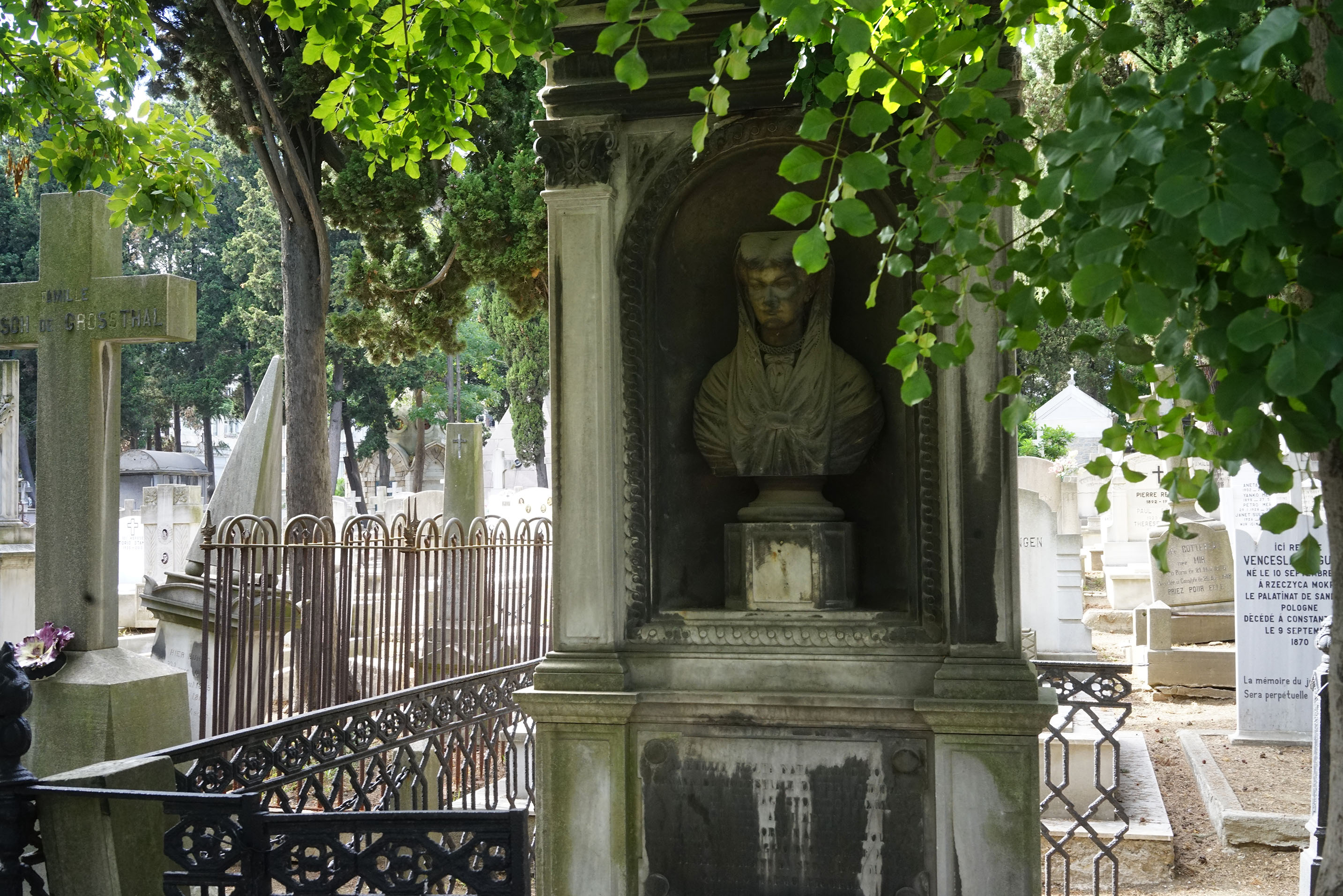 I start with a quote from Andrew Finkel's 'Private View' column, in Cornucopia's issue No 42, on the parting of a friend: ‘The city I first met, too, has long since disappeared as the population has doubled and doubled and doubled again. But, of course, Istanbul is a city where you learn to forgo nostalgia. You either embrace change or drift away. While life in Istanbul involves a constant battle not to become sentimental about the past, it is almost impossible not to admit defeat after a visit to Feriköy cemetery.’

I once joined a walk conducted by Professor Paolo Girardelli, art historian and chair of the department of history at Bosphorus (Boğaziçi) University, on a less sunny day than those Andrew describes, though the sentiment was surely there and the stories were many. Dr Girardelli reveals:

Strolling through a cemetery evokes different memories and feelings for everyone. For me, as an architectural historian focusing on the Levantines and the history of Beyoğlu, the cemetery in itself is a witness to the importance of the Catholic Levantine community in Istanbul. There are both monumental graves and more modest ones here, and people from every social strata. 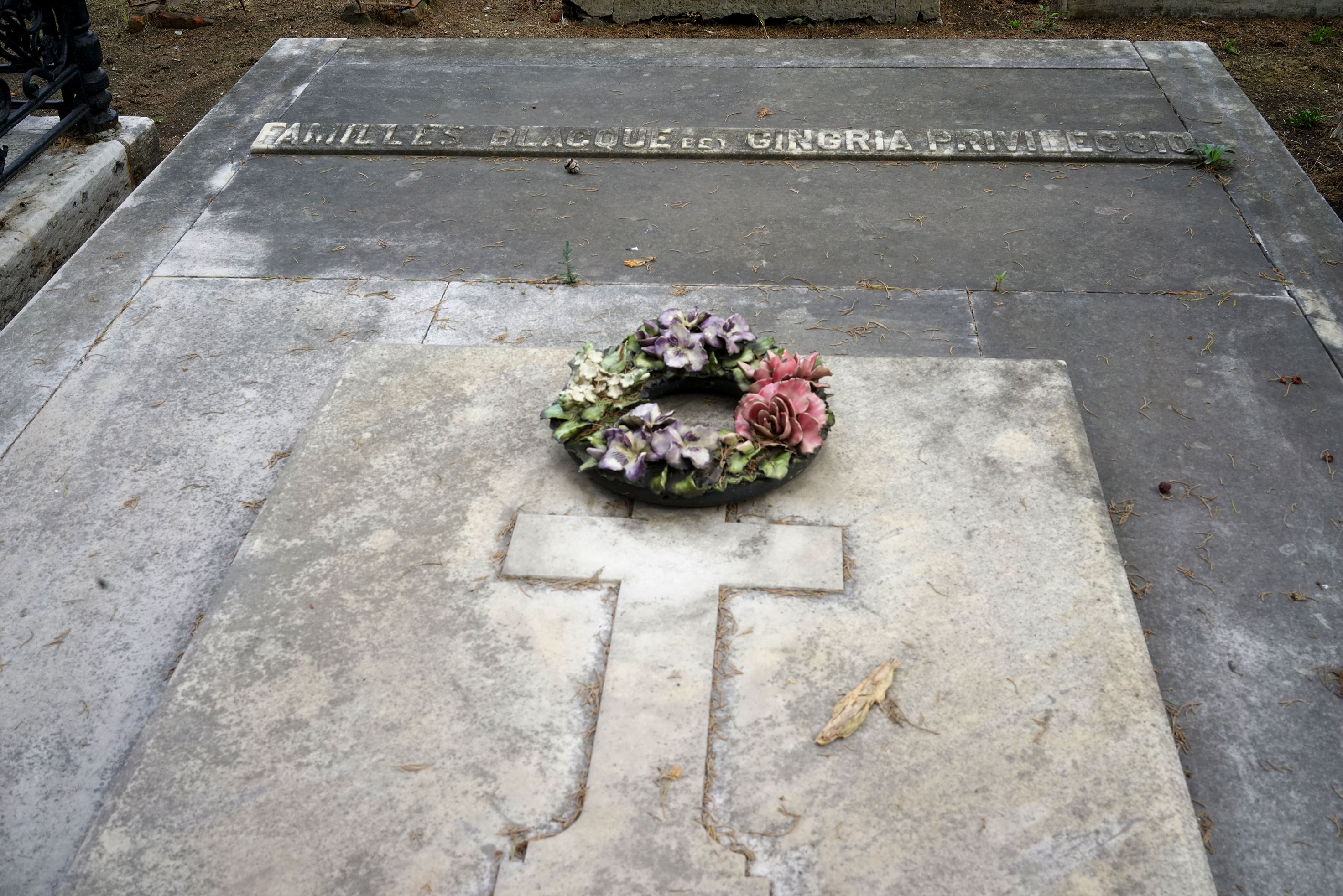 Blacque Bey, Cingria and Privileggio: these three families are all in their way connected with the urban and architectural history of Istanbul. Blacque Bey was director and chair of the first municipal council, established in the mid-19th century in Beyoglu. Alphonse Cingria was a prominent builder, engineer and architect in the second half of the 19th century, and a woman in the Privileggio family was married to one of the most influential Italian Levantine architects in the country, Giulio Mongeri, the architect of Saint Antoine. 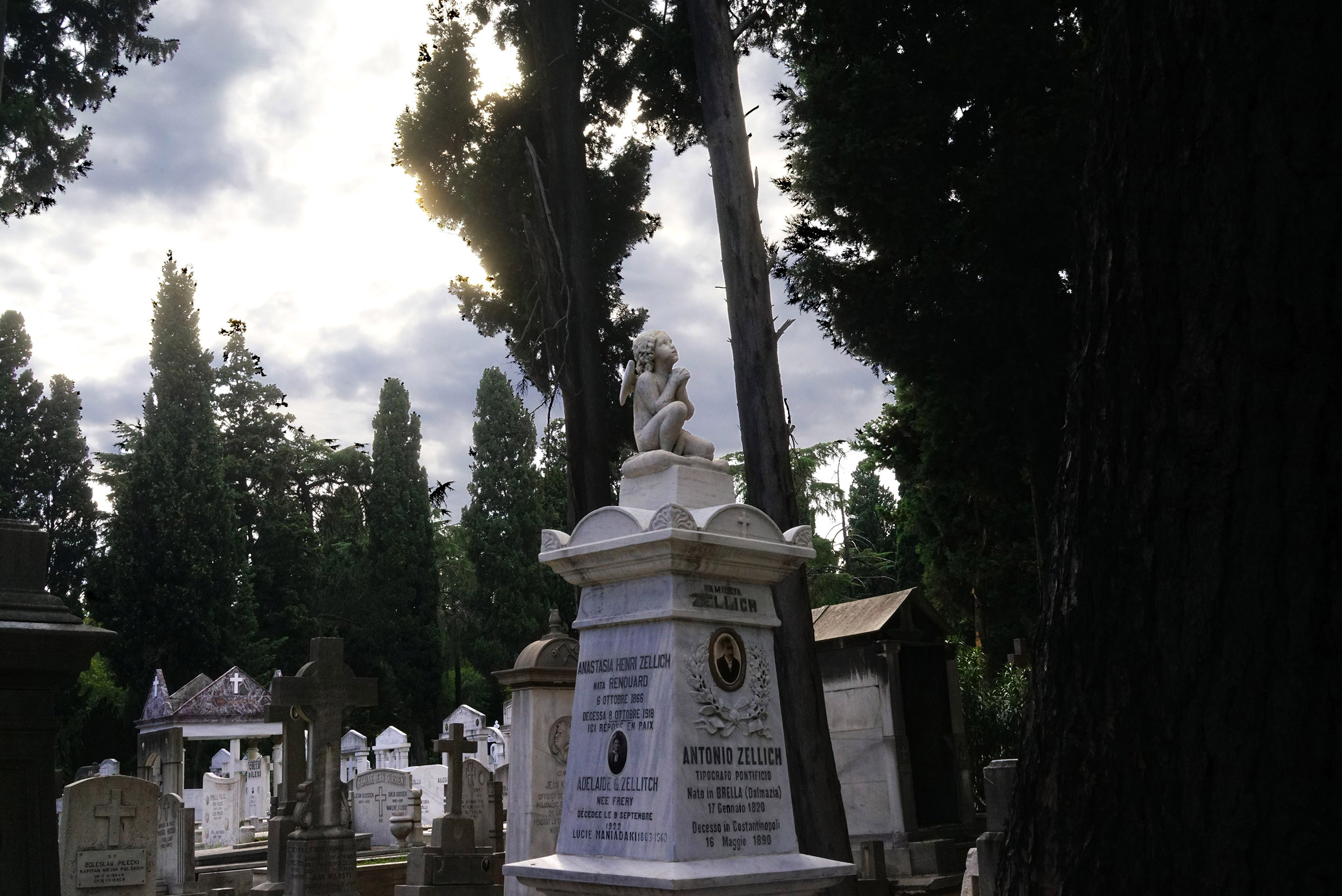 Antonio Zellich was from a family of Croatian origin, of which there were many because of the Republic of Ragusa/Dubrovnik connection. Antonio Zellich owned a typography and publishing house and published many interesting works on Constantinople/Istanbul in the late 19th century. 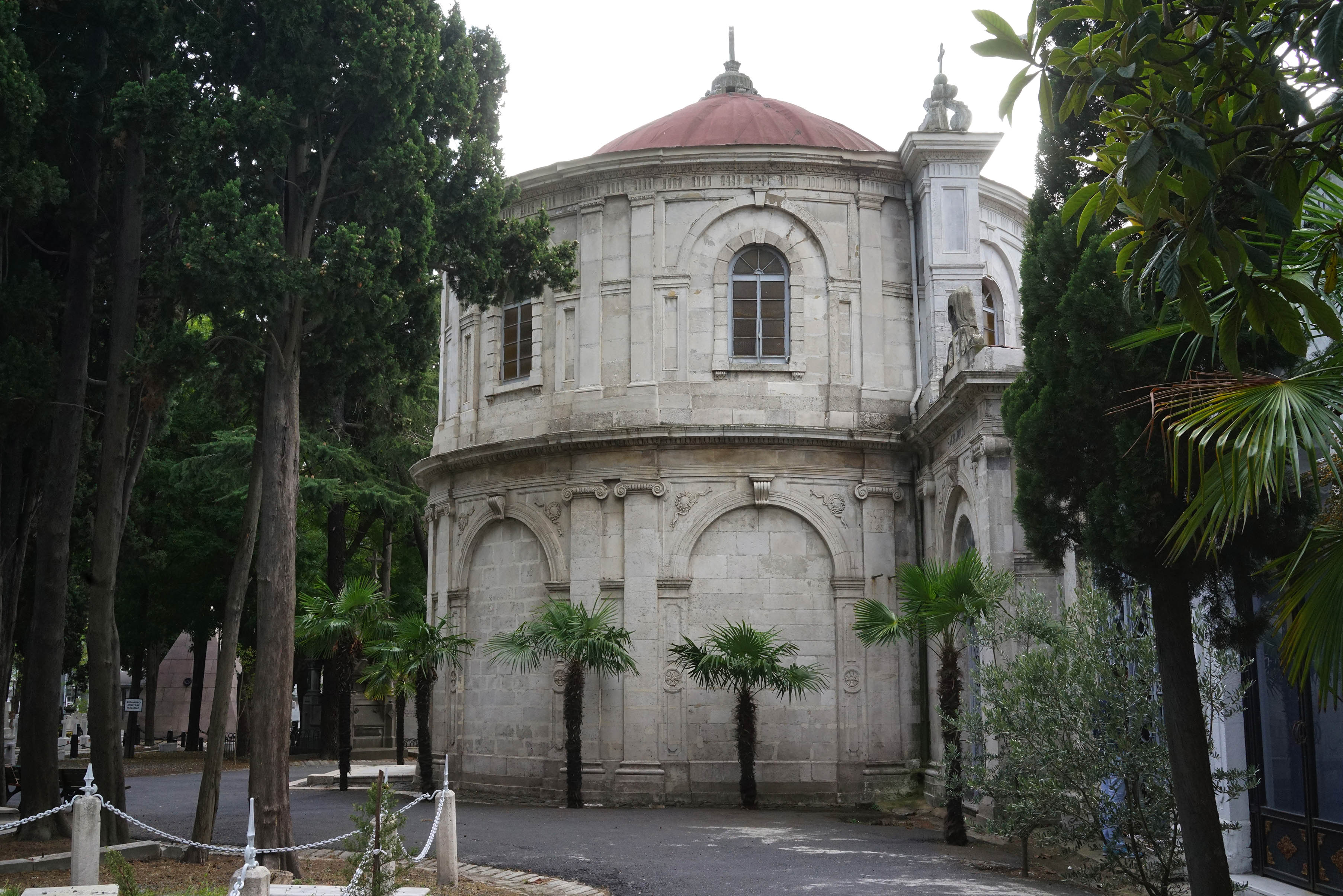 The funerary chapel of the cemetery was designed by a priest, together with the famous architect/engineer Gianbattista Barborini, from Emilia-Romagna (in central northern Italy). In 1848 he had escaped from Italy for political reasons: being in favour of the unification of Italy he was in trouble with both Austria and the Papal states. He found asylum in Istanbul and stayed for over 30 years, even after Italy was finally unified. He worked for the municipality, designing and building the Beyoglu municipality (still standing), the first railway station at Haydarpasha, along with many other public structures including theatres. He assisted the vicar in charge of the reorganisation of Catholic cemeteries after the old Catholic cemeteries around Taksim were moved to this new area in Ferikoy. It's interesting to note that the interior of the chapel contains no depictions of the human figure. There are Latin inscriptions but no images, probably out of respect for the Muslim avoidance of images in sacred places. 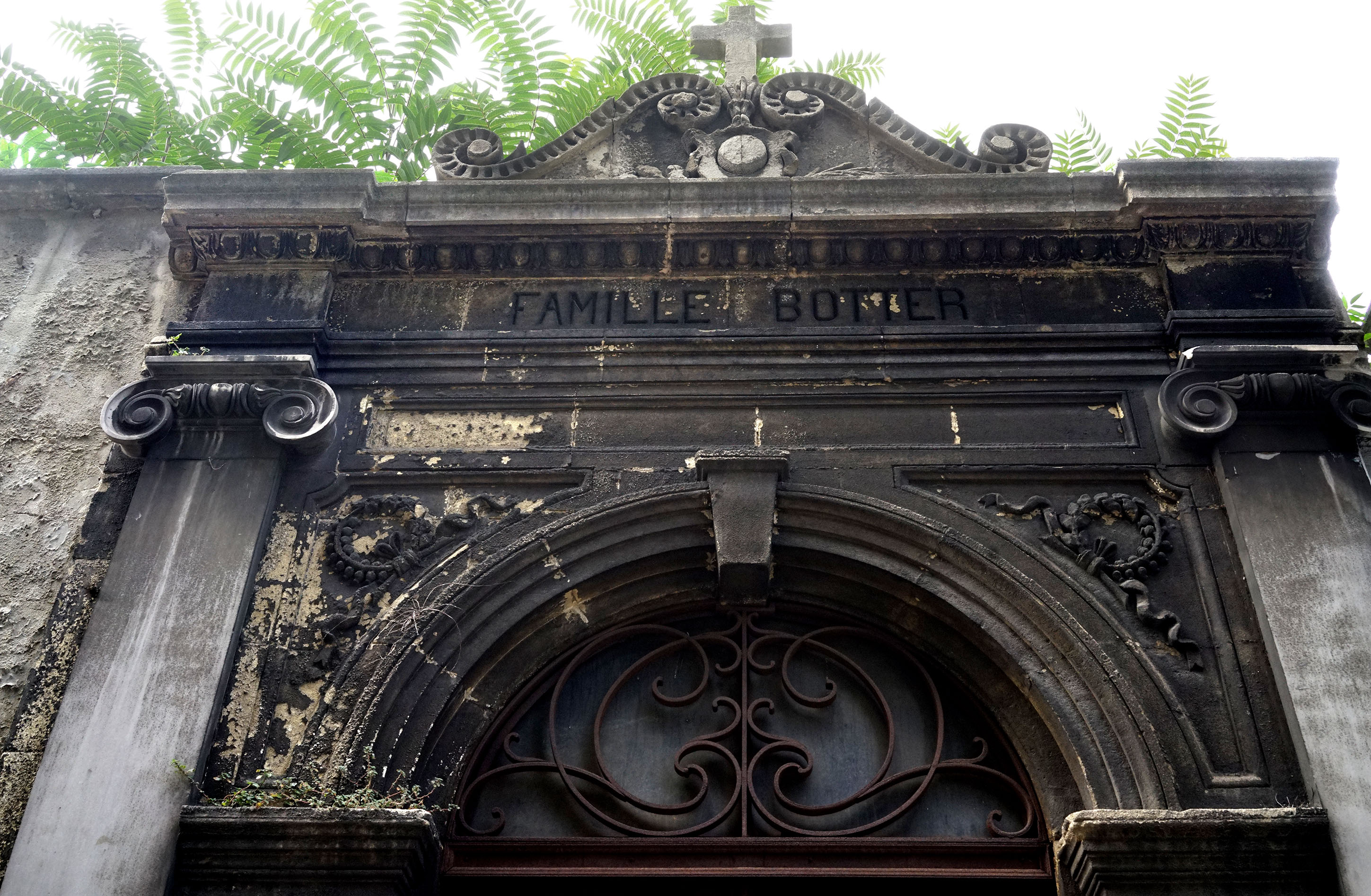 The Botter family chapel: this very influential family brings to mind the exquisite Botter building, one of the most elegant Art Nouveau buildings in Istanbul, designed by the Italian architect Raimondo D'Aronco. Jean Botter was a tailor and clothes designer, purveyor to Abdülhamid II. This tomb was probably designed by a Levantine architect, though not D'Aronco, for the style is less original and creative, and more conventional. However, it is a fine classicist design, with two ionic pilasters. 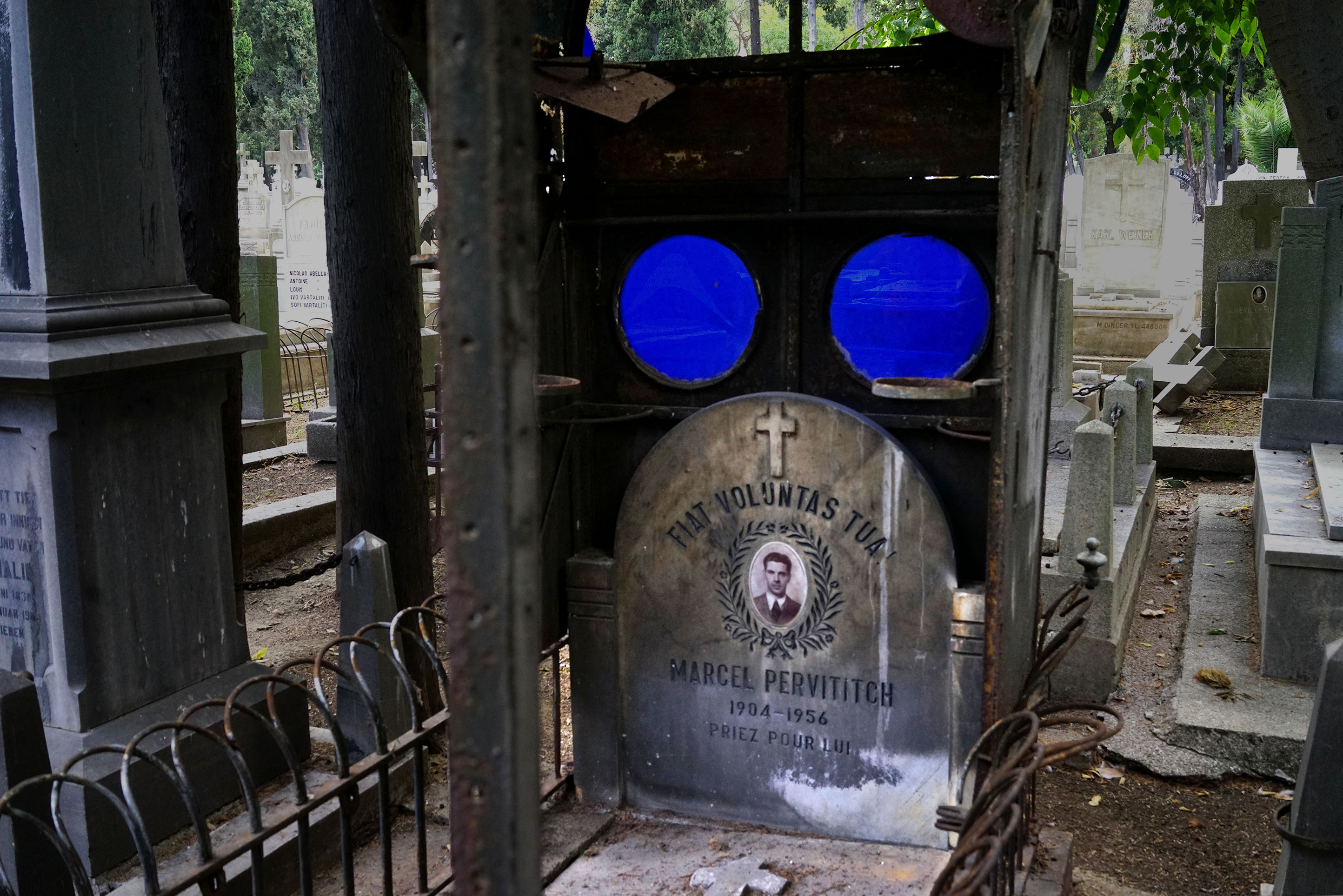 Marcel Pervititch is also a very important name for anyone doing urban and architectural research on Istanbul. The plans Pervititich produced are a sort of X-ray of Istanbul in the Twenties, Thirties and Forties. Every single building was recorded, along with its construction materials, to help insurance companies understand the fire risk. 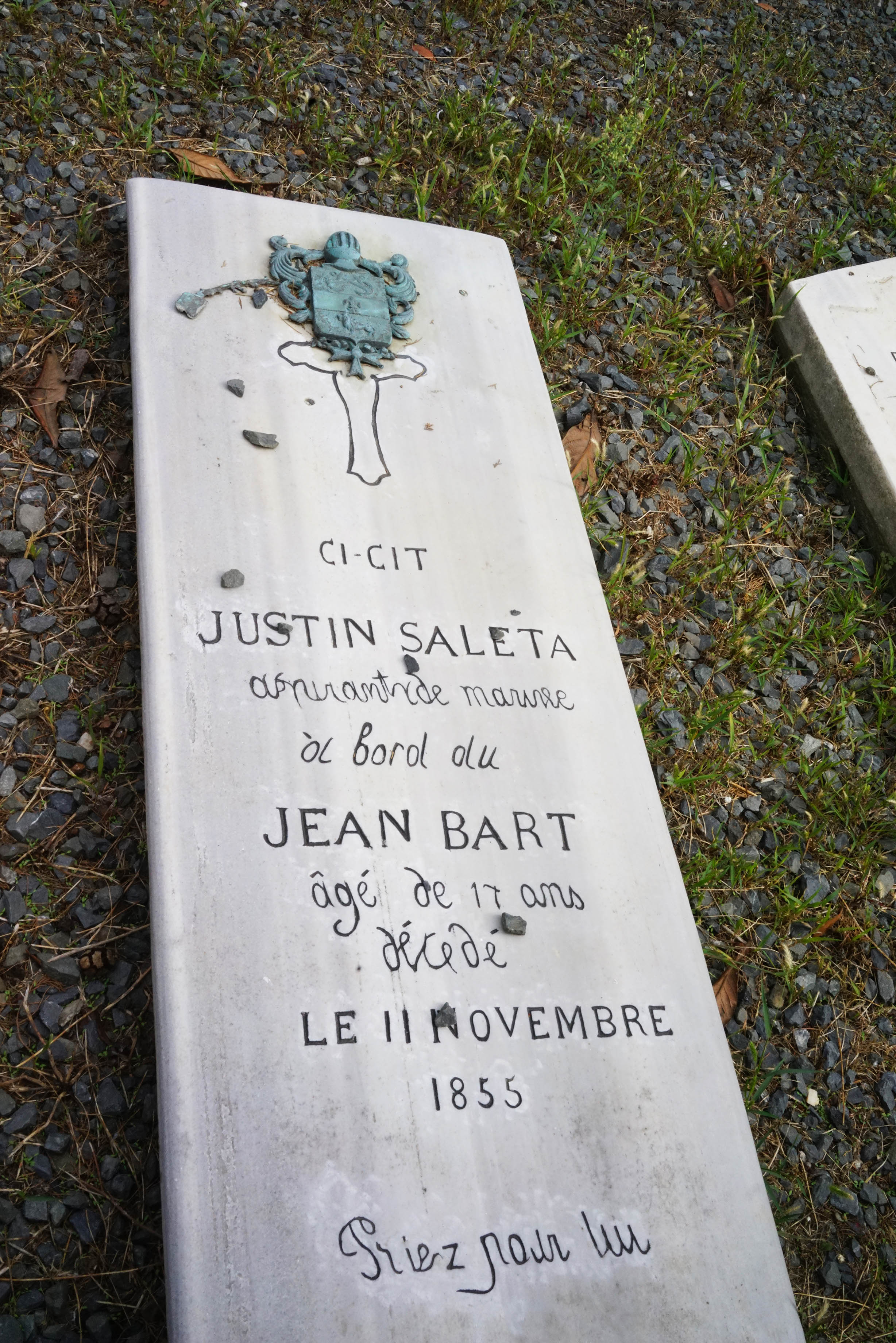 A tender reminder of the Crimean war: this appears to be the grave of an apprentice sailor who died at the age of 17 on the French ship Jean Bart, which came to the area when France, England and Piedmont allied with the Ottoman Empire against Russia. 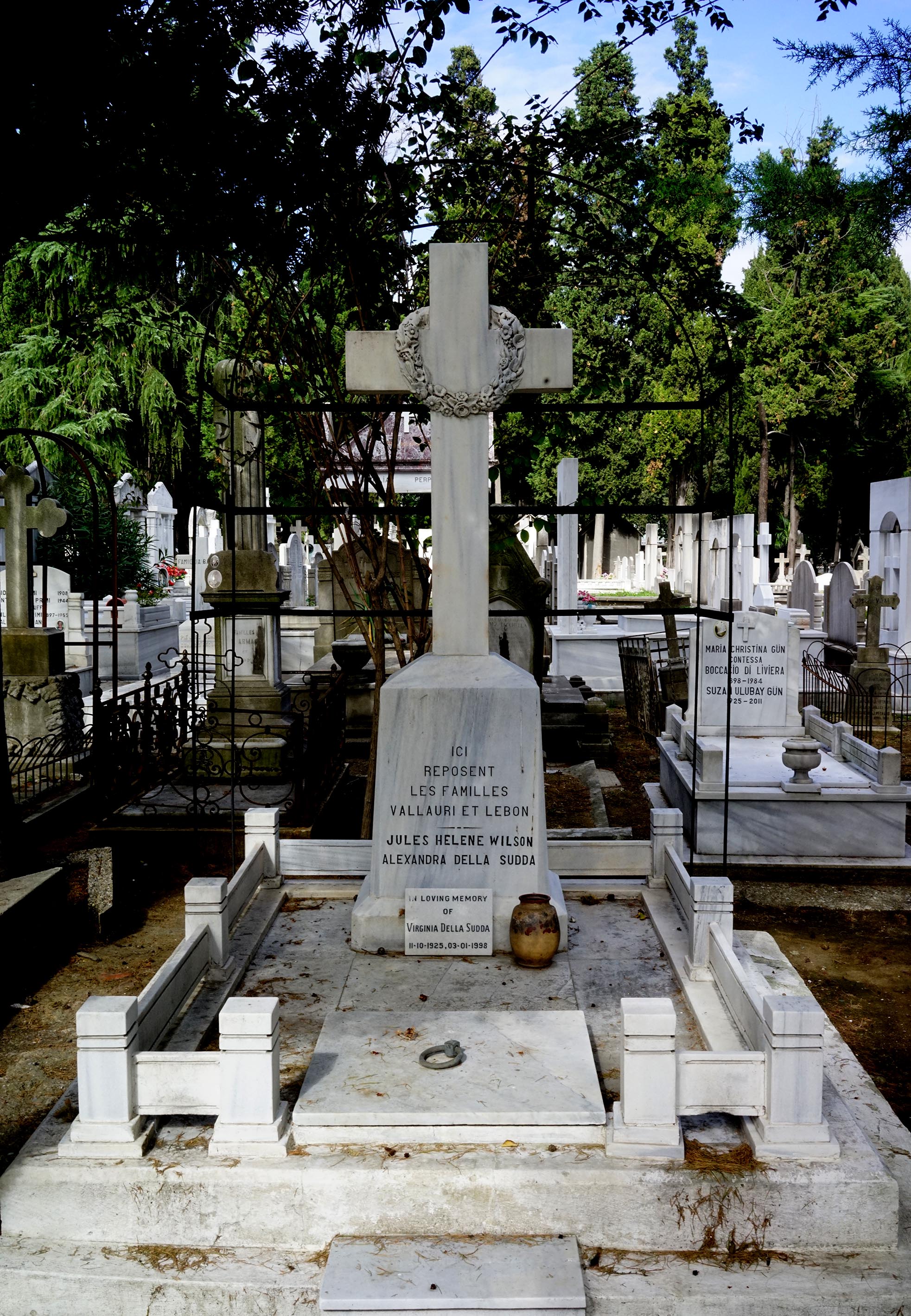 The Vallauri and Lebon families united early in the 19th century. Francesco Vallauri was a confectioner and a purveyor to the imperial family. The Lebons, a French Levantine family, owned the famous Markiz café which still stands today in Tunel – though in a sad, commercialised state. The son of Francesco Vallauri was Alessandro Vallauri, or Alexandre Vallaury. There is ambiguity urrounding his nationality. Born as an Ottoman subject, he became one of the most prolific and influential architects in the 19th and early-20th century in Istanbul. He had studied at the Ecole des Beaux-Arts in Paris, and was buried in Grasse (in Provence). Buried here are his parents and other family members. Vallauri was the architect of Pera Palace, now the Haydarpasha campus of Marmara University – on which he collaborated with D'Aronco (see Cornucopia issue No 46) – the Istanbul Erkek Lisesi (once the Public Debt headquarters), the Ottoman Bank and the Archeological Museum. The Istanbul landscape is dotted with landmarks designed by him. 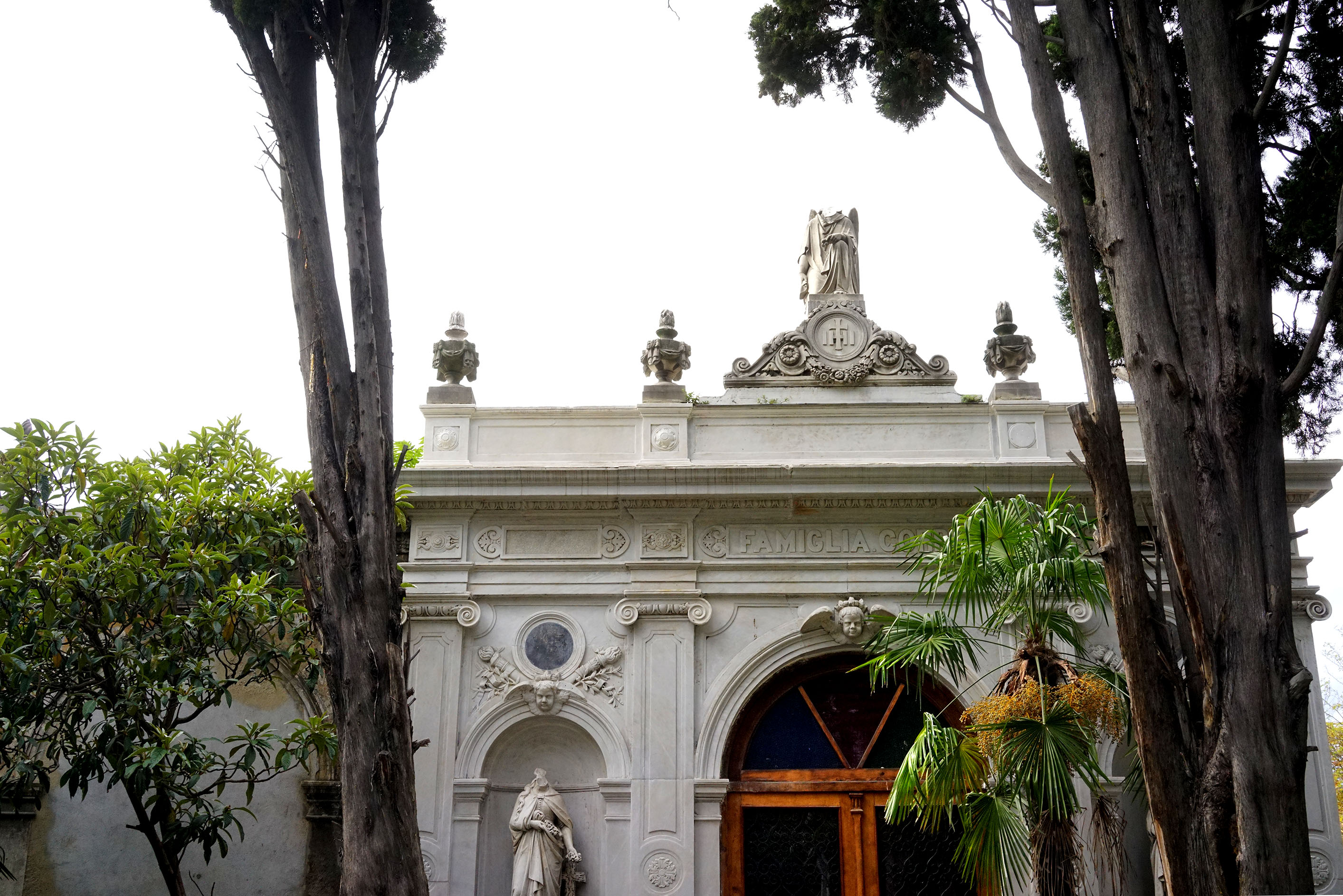 The funerary chapel of the Corpi family is even more imposing than the Botter chapel. The Corpi were a wealthy family of Genovese origin who settled on the Greek island of Chios and came to Istanbul in the early 19th century. The most famous members of the family were Domenico and Ignazio Corpi, whose wife was Sofia. Ignazio Corpi was the patron who commissioned the architect Giacomo Leoni to design the Palazzo Corpi, which later became the US Embassy, then its Consulate, and today is Soho House. 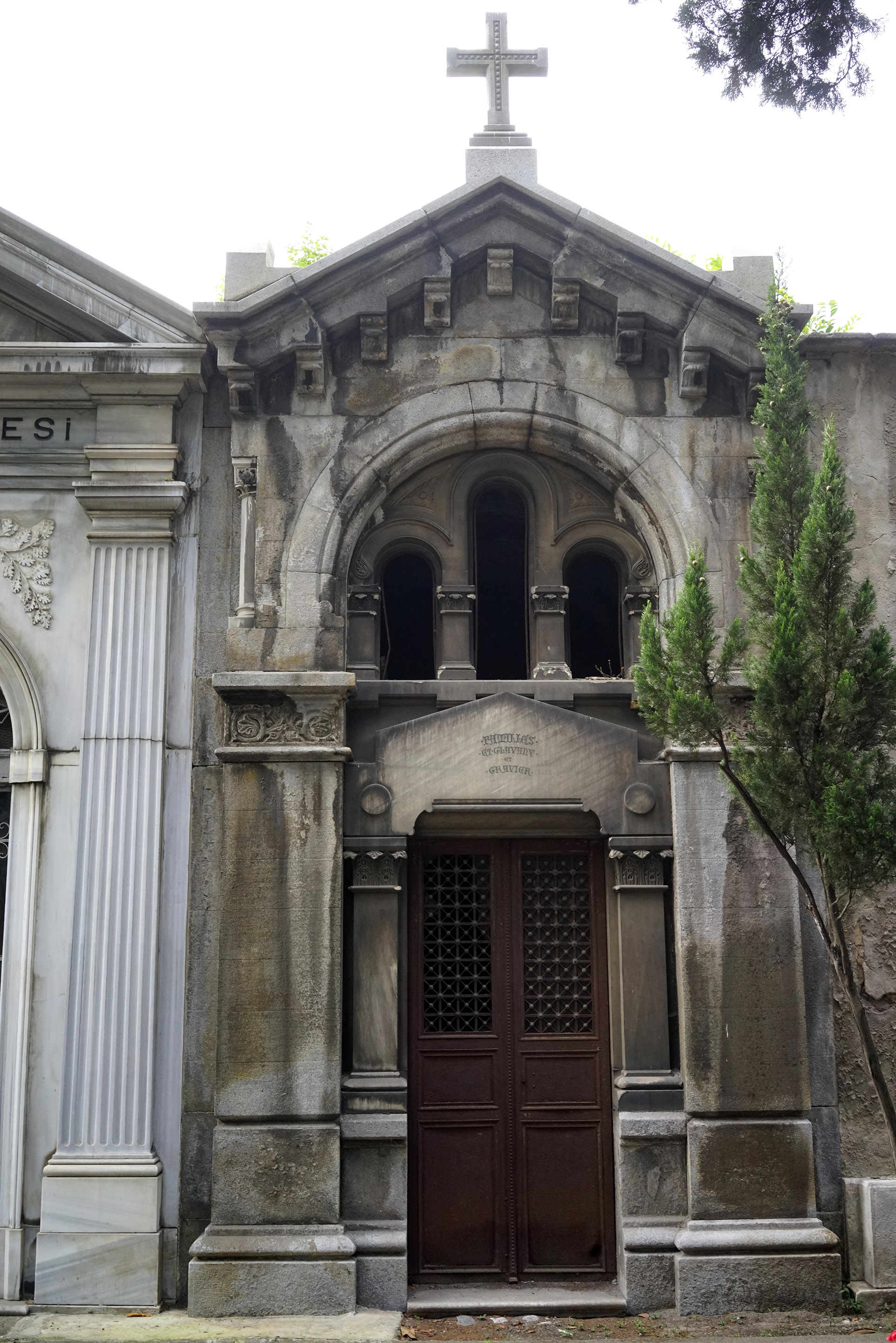 This is the tomb of two French Levantine families who were highly influential in the history of not only Istanbul but also of Izmir and the Levant in general. Some of the buildings they commissioned are still standing. One such is the Buyuk Londra Oteli, (commissioned by Glavany) and the Glavany Building which is on a side street that leads to the Italian consulate. The Gravier family was here from at least the 18th century, and the French ambassador, Vergennes – one of the most influential diplomats in the history of Ottoman-European relations in the mid-18th century – married a lady from the Gravier family. At the time this was illegal, as French ambassadors were not allowed to marry into the local community, so the marriage had to remain clandestine. Their children, who dressed in the local Ottoman style, were culturally Levantine and Ottoman, not just French. When the ambassador returned to Paris at the end of his mission he tragically had to leave his family behind, and was said to be desperate at leaving his ‘unofficial’ family in Pera. There are portraits by Antoine Favray of the Ambassador Vergennes and Madame Gravier in the Pera museum. This tomb has original architectural features and a medieval revivalist character, as opposed to most of the others which are classicised. 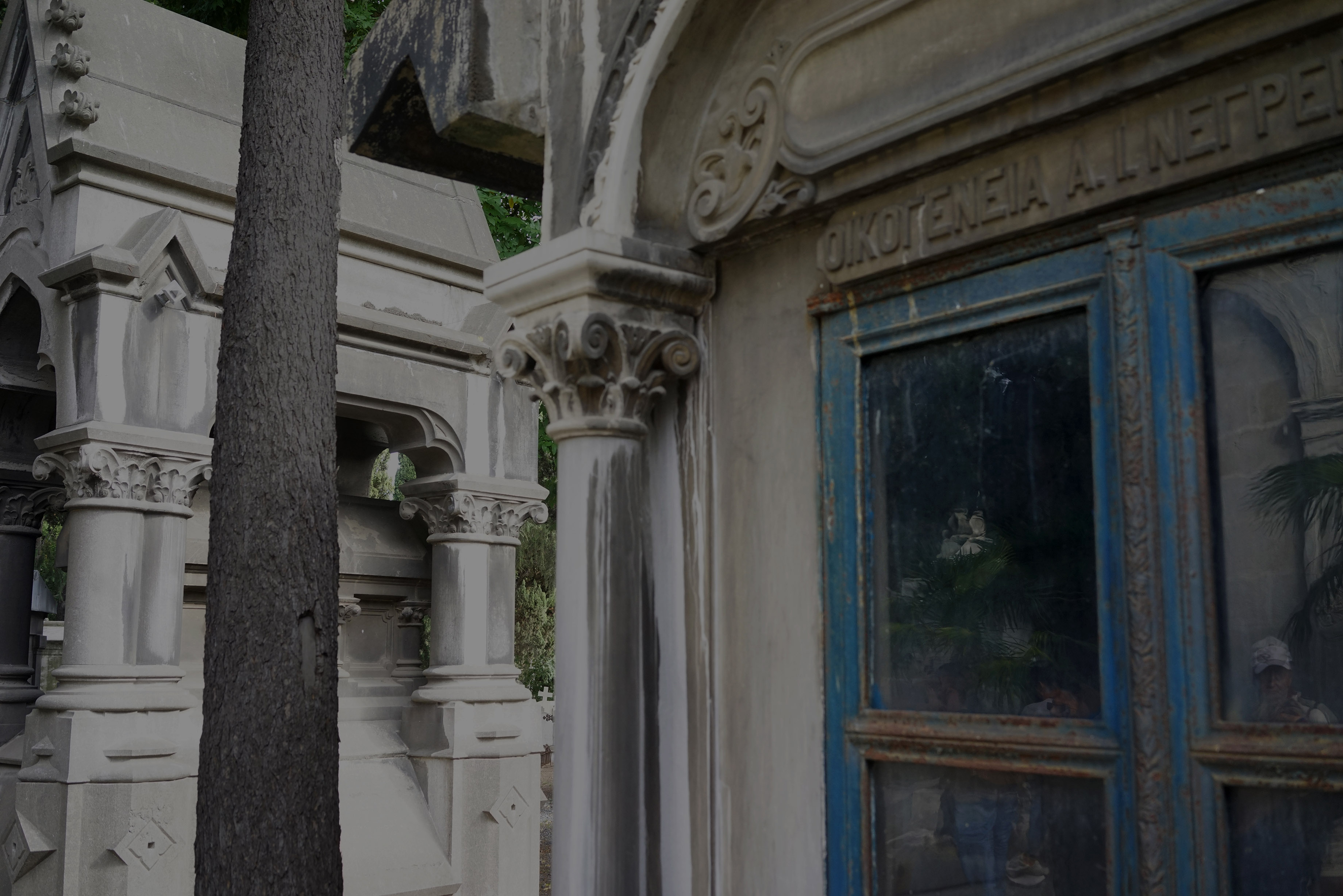 The cemetery is a world within the city, and a reminder of the plural society that once lived here. It should be protected as a unique example of multicultural heritage.