We have lost a friend, a brilliant writer and a man with a passion for Turkey and its people. David Shankland pays tribute 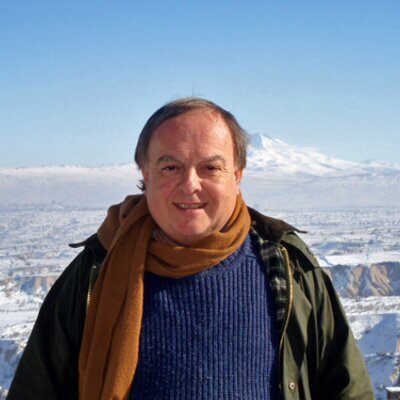 David Barchard's funeral took place on Tuesday, January 12, at St Mary's, Nun Monkton, Yorkshire. Since none of David’s family, nor his friends (other than those living in Nun Monkton), could attend the funeral because of Covid restrictions, this deeply moving service was live streamed. This is the link for people to access the service. It is available as a recording.

A David Barchard Memorial Fund has been set up under the aegis of the Anglo-Turkish Society in London with a view to supporting scholarships and an annual David Barchard Essay Prize. David was a teacher and inspiration to many brilliant young Turkish students. Friends are invited to contribute to a scholarship fund in his memory at the excellent Cappadocia University, not far from his home in Uçhisar. For details see below.

It is with great sadness that we have to announce the death on Christmas Day of David Barchard, photographed above in his beloved Cappadocia. His parting was entirely unexpected and came when he was still in the midst of his powers, as a result of a fall when he was out for his evening walk the day before Christmas Eve.

David spoke and wrote Turkish fluently, and was able to converse freely at all levels of Turkish society. In his time, he had lived for many years in both Ankara and the countryside, in Cappadocia, giving him an insight that few, if any could match. Later, now living in the village in which he was brought up in Yorkshire, he kept in a close contact with friends and events in Turkey, maintaining a continuous stream of reports and commentaries.

David was educated at Stonyhurst, which he credited with instilling in him a love of Classics; he then read History at Oxford at St Johns, before moving to Nuffield College as a post-graduate. As his career progressed, he came to know Turkey professionally, initially as a teacher in a lycée in the Black Sea coal-mining city of Zonguldak, then as a writer for the Guardian, FT correspondent for Turkey, and subsequently as an advisor, as well as teaching in a number of different Turkish universities. 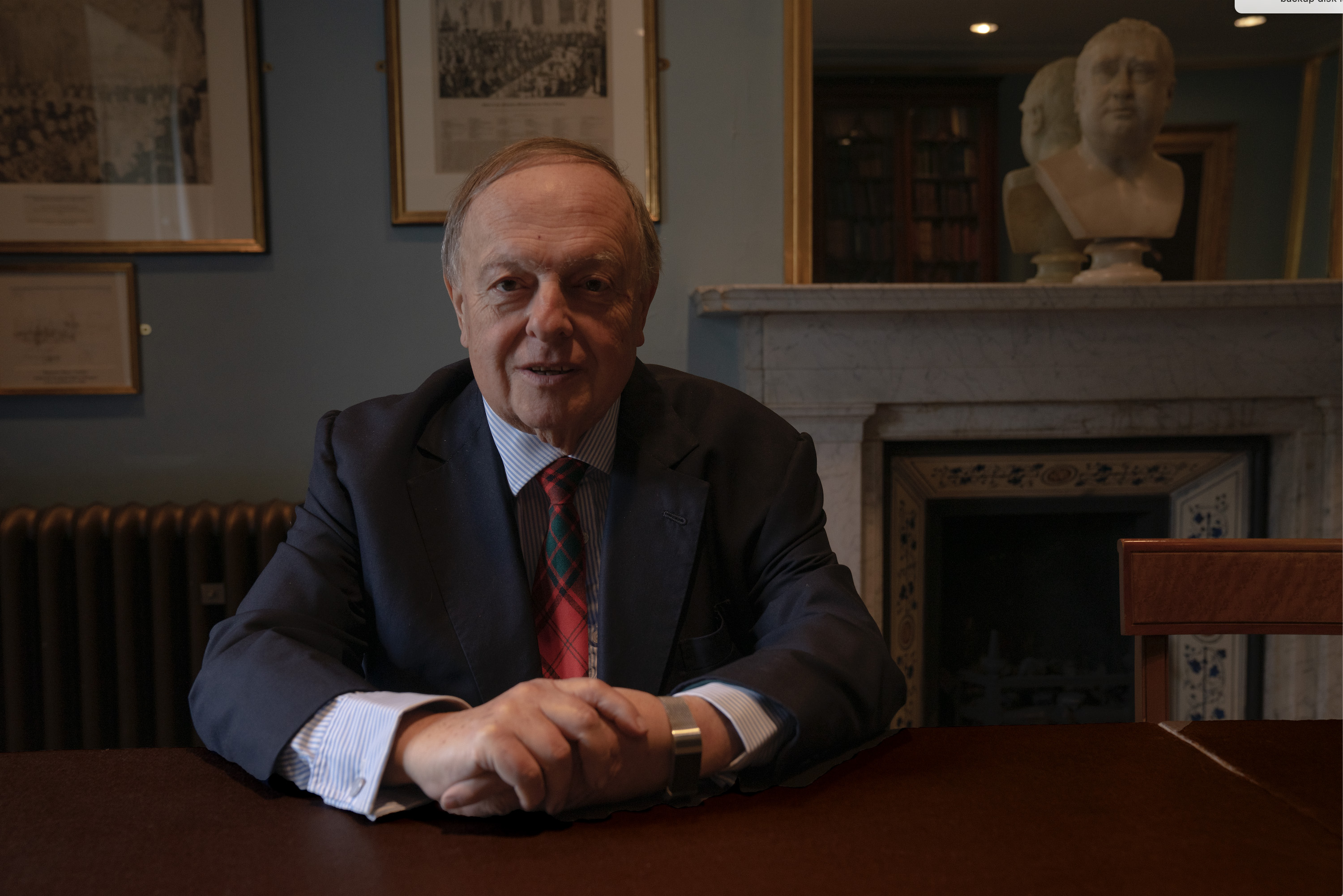 Simultaneously, he researched the history of modern Turkey, 19th-century diplomacy (particularly Crete), and Byzantine archaeology, and gave and published meticulous carefully argued papers on these subjects, all this alongside his commentaries on current affairs, obituaries, and incisive book reviews. 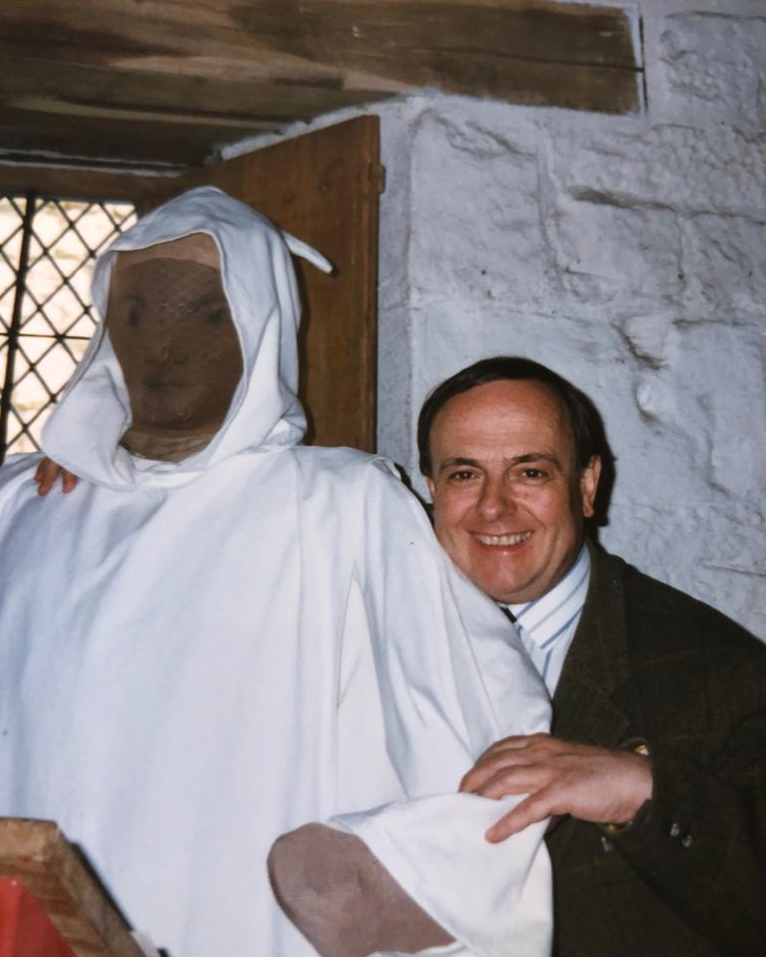 A brilliant conversationalist, and gifted at making close friendships, many of which lasted for decades deepening over time, he will be missed by an enormous circle both in Britain and in Turkey. Our sense of loss will grow, rather than diminish, as time goes by.

David Shankland is Chairman of the Anglo-Turkish Society

I must be speaking for many when I attribute to David’s unstinting help and guidance my growing understanding of and affection for Turkey during my early years in Ankara, when he many times sought me out and sat me down before pointing me in the right direction. Even after he left the country, he was still doing the same thing effectively, via an unceasing trail of e-mails from every imaginable source.  Certainly he knew more about the history and politics of Turkey than any other foreigner that I ever met and he had clearly felt an extraordinary affinity with this country since undergraduate days, and perhaps beyond. It seems to me that he always had the best interests of Turkey at heart and that somehow he never despaired of things taking a turn for the better, such was his belief in the innate good sense and character of the Turkish people.

My favourite image of him comes from a time at the old Turkish Daily News when he arrived one morning to produce an article on some arcane (to me) archaeological discovery. He was a given a desk where he sat for an hour writing without getting up or looking round. When the work was done, he printed it off, passed it to the editor and left. Asked to proof-read this article, I found not a word out of place or a comma too many. The piece was – as always – perfectly lucid and engaging and exactly the right length. ‘That’s how professional journalism works,’ I thought.

He may or may not have been aware that not all mortals could quite keep up with his speed and cogency of thought, although he claimed that no slowcoach could long survive as an FT columnist and I believe that the FT remained for him the model of a properly written paper.

We enjoyed an oft-repeated exchange of opinion that went something like this:
‘When can we expect your history of Turkey to be finished, David?’
‘Never. There’s too much to say and too much that can’t be said.’
‘You owe this book to your adopted country.’
‘I have other fish to fry.’
‘But this fish is the big one and no one else can land it and cook it.’
And so on. I think actually he was daunted by the enormity of the task. He knew too much.

Still, I do wish he’d been granted another ten years, or twenty, or whatever it took, to write this work, because I wasn’t flattering him by saying that nobody else could do it. It was the simple truth 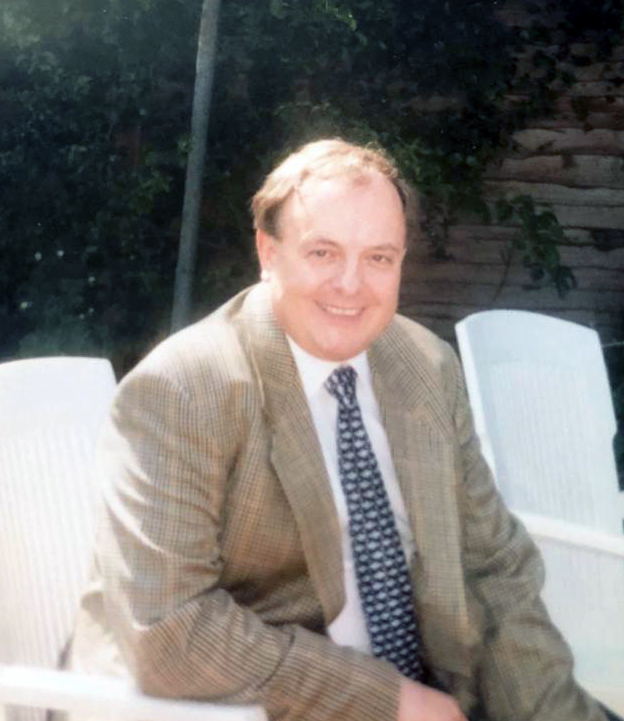 David when he was FT correspondent in Ankara

To David's sisters and friends at Cornucopia and elsewhere.
from Sydney, Australia:

We have just learned with the greatest sadness of the passing of our dear old friend David. We all first met in 1968, when David arrived in Zonguldak to work with us at Zonguldak TED Koleji. We have been friends ever since and have spent happy gatherings together from time to time in Yorkshire, Sydney, and Yorkshire. We will always treasure our discussions and debates about Turkey and the memories we shared. A true fount of knowledge and insight, especially regarding Turkey, I always valued his views throughout my own career of contact with Turkey.

Our condolences to you on losing your dear, highly intelligent and gifted brother, and to Turkey for one of its best international friends. 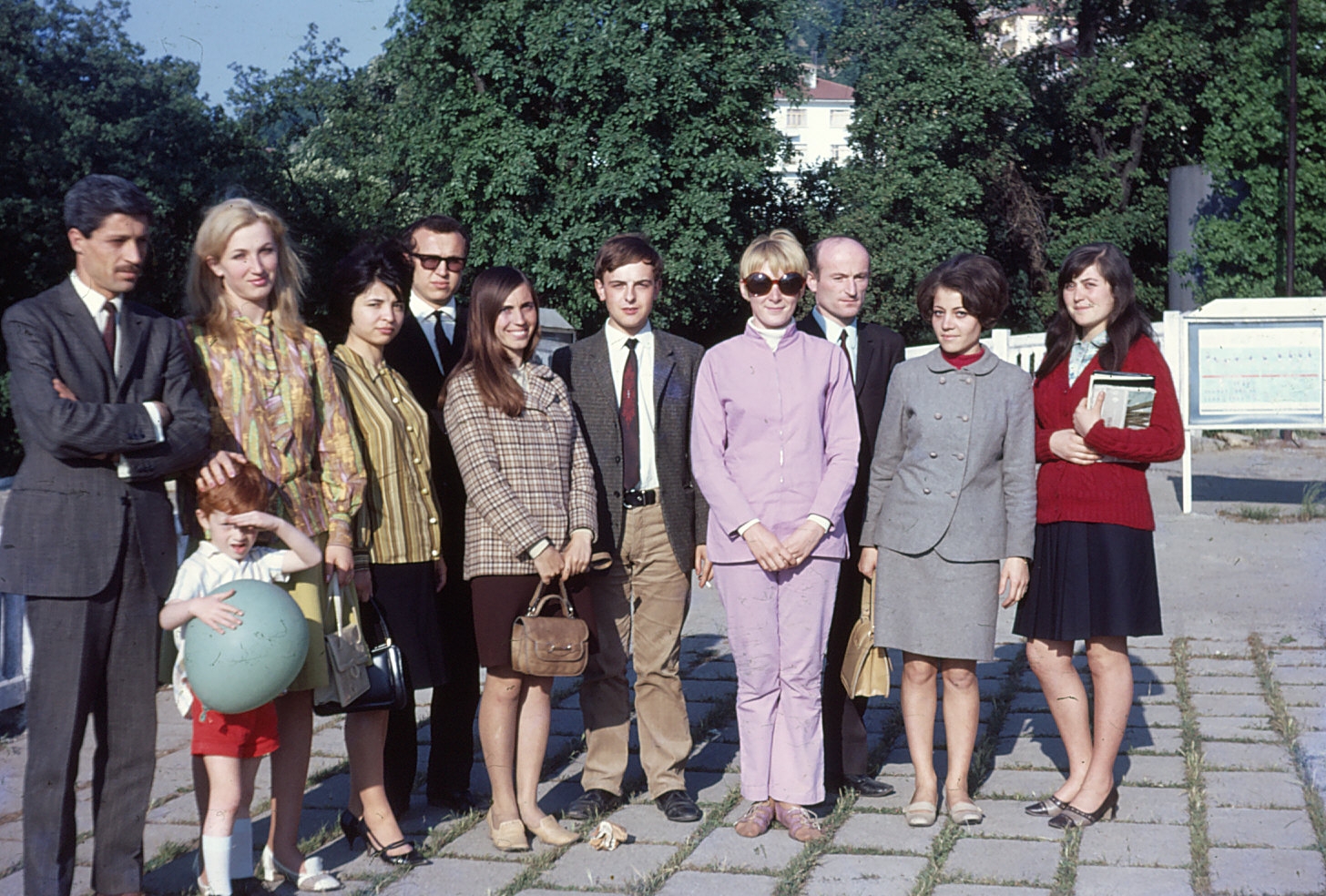 A young David  with the TED Zonguldak Kolej Staff, 1969. On the left is the Kolej director with his son and wife. David (in jacket and corduroys) stands between Sevtap hanım, a Turkish Language teacher, and Cindy Broadbent (French teacher, in violet trouser suit.)

I am so sorry to hear the sad news of your beloved brother's death..

David was older than me by six years at Stonyhurst but we caught up once we had embarked on a career in journalism and we both saw quite a lot of each other over the years working for the Financial Times  as foreign correspondents and  back in HQ in London.

I remember him as  a generous colleague , always helpful with his advice and cooperation, and with a refreshing independence, not least when standing up to authority whenever he felt it unjust and unfair. He was a man of faith with firm principles and views  but never a fundamentalist. He showed an instinctive compassion and tolerance towards fellow human beings  and other cultures which I think he owed, along with his love of Classics, to his Jesuit education.

He showed great professional  insight drawing from his years of coverage of Turkey , a country  he came to understand and love as well as suffer ,and  where he made many friends.

Here is a link to an article  he wrote last July, on the  Hagia Sophia  mosque for the international catholic weekly "The Tablet".
www.thetablet.co.uk/features/2/18430/museums-into-mosques-turkey-embraces-a-new-iconoclasm

My prayers and thoughts are with you in this time of loss.

May He Rest in Peace 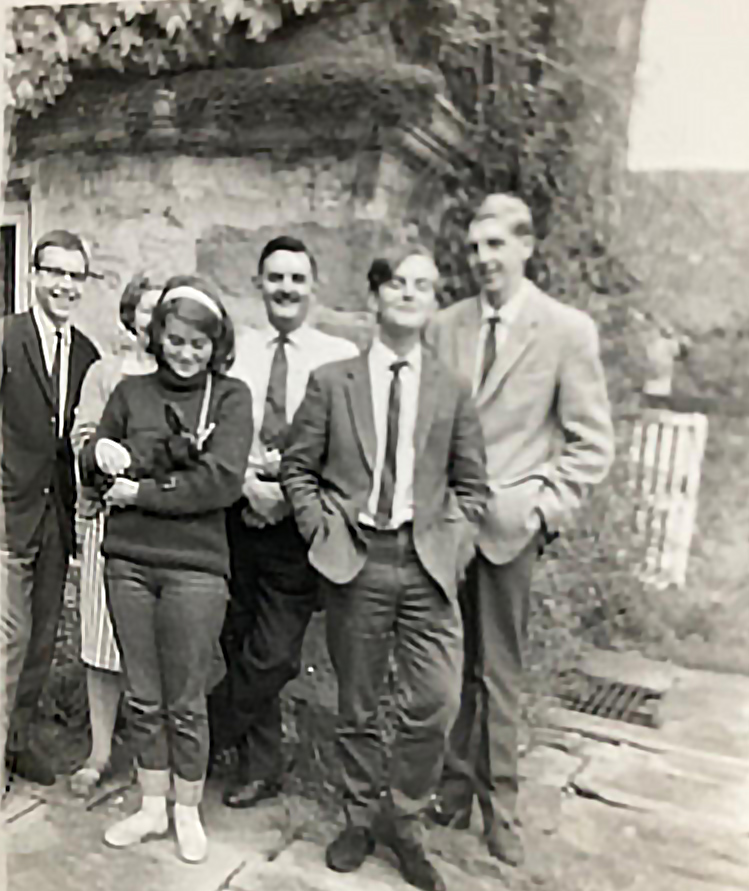 David with sister Tish (left), his parents (centre) and friends from Stonyhurst (far left and right)

I just wanted to add my own small tribute to David. He was an exceptional individual, a man true to himself, to his values, to his sense of decency, liberty and above all to the truth.  He was highly intelligent and a genuine free-scholar, beholden to no man, let alone the agent of some callous ministry. When I last spoke to him (maybe at Norman Stone’s memorial service in London? ) he was working towards completing his book on the Pashas of the late Ottoman Empire.  I hope this was achieved?  I once tried to weezle a copy of his book on CAPPADOCIA out of yDavid, who had suppressed it, in case some of his favourite quiet places were ruined by the tramp of tourist boots (like my own!).

Sadly we shall not see his like again, though Shakespeare seems to have come across David.

Give every man thy ear but few thy voice
Take each man’s censure but reserve thy judgement..
Neither a lender nor a borrower be,
For loan oft loses both itself and friend…
This above all, to thine own self be true,
and it shall follow as the night the day,
thou cannot then be false to any man

If you would like to send a messages to David's family, please write to editor@cornucopia.net. We will be very happy to redirect letters to his sisters, Sue and Tish.

The Anglo-Turkish Society will be very pleased to accept donations in order to set up a fund in his memory. The fund will be used for an annual essay prize in David Barchard’s name, which will be administered by the Society. However, it would be equally pleased to administer any other donations, such as to found a scholarship, depending on the wishes of the donor (see below).

Donations may be sent to:

Please put David Barchard Memorial Fund in the reference line of any donation.

The Anglo-Turkish Society is a UK registered Charity, number 278727.

If you would like to sponsor a scholarship in David Barchard's name, you can either ask the Anglo-Turkish Society to forward your donation or make it yourself directly to the Cappadocia University donation fund. Simply write David Barchard Scholarship Fund or only David Barchard in the explanation when making the transfer.

The aim will be to sponsor both undergraduate students and research papers.