Sainted friends: the panels of the Crimean Church rood screen 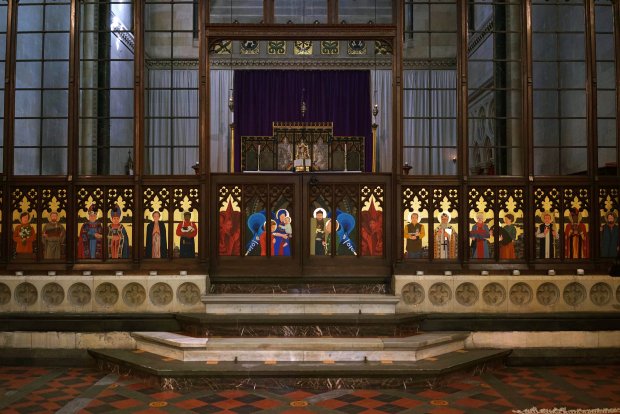 Step down the aisle of Galata’s lovely mid-19th-century Crimean Memorial Church, a little-known masterpiece by George Street, architect of the Law Courts in London, and look closely at the rood screen dividing the nave from the chancel, the domain of the clergy, and you will come across some beautiful, unusual, sharply painted icons of saints. The artist, Mungo McCosh (born 1969), is now based in the Scottish Lowlands, but in the late Nineties he was living in Istanbul and, in the age-old tradition of the Italian old masters, he turned to friends and members of the congregation for models in his depictions of saints. It took him almost a decade to complete his gift to the Christ Church, as the Anglican Crimean Church is more properly known. There was gold to be bought and the oak panels came from Plovdiv (whose beautiful wooden architecture features in the next Cornucopia).

Here Canon Ian Sherwood, who rescued the church from oblivion in 1993, with the help of Sri Lankan and Somalian refugees, introduces the saints and their models. 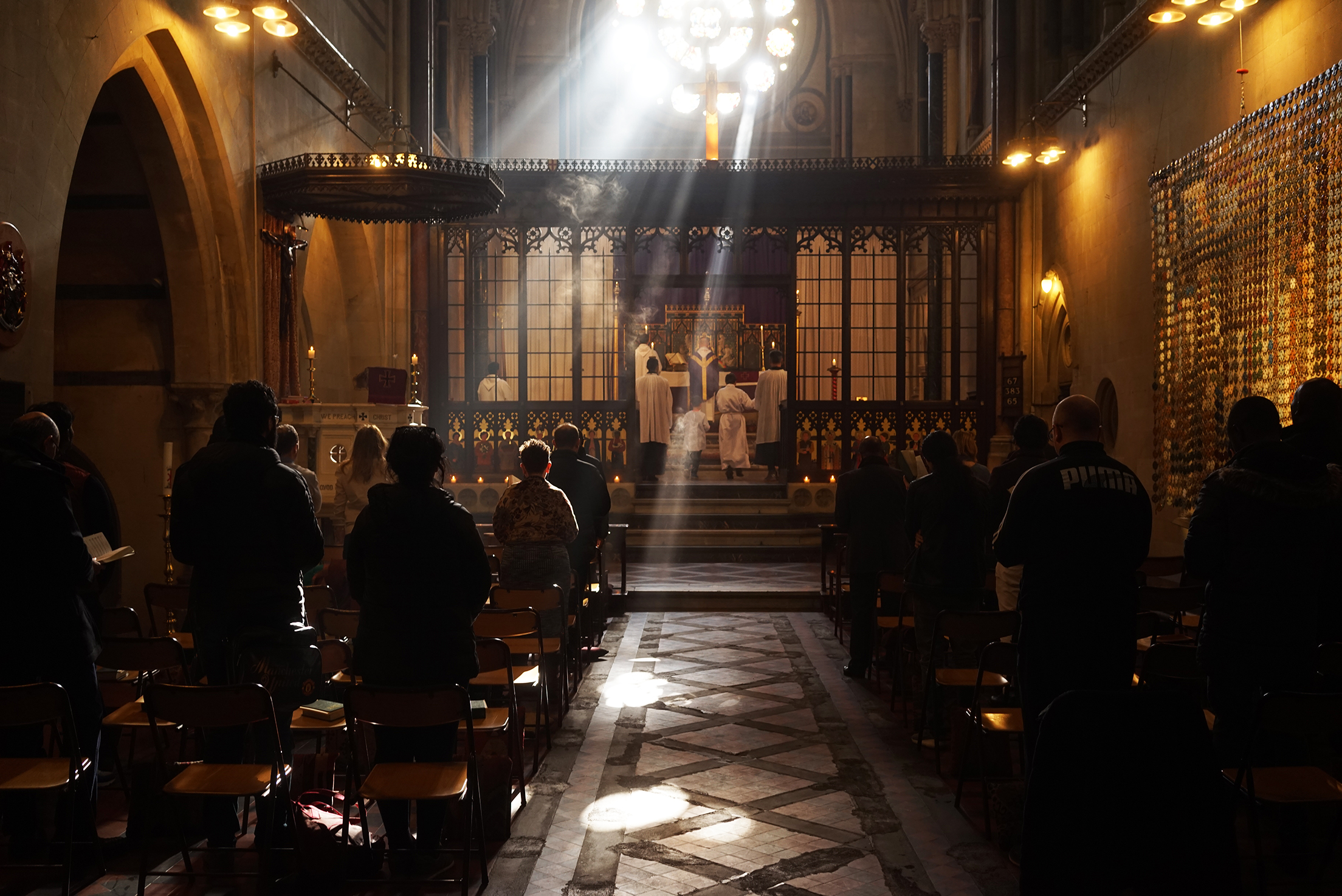 Looking down the aisle of the Crimean Church, through the rood screen, to the newly restored rose window (all photographs by Monica Fritz) 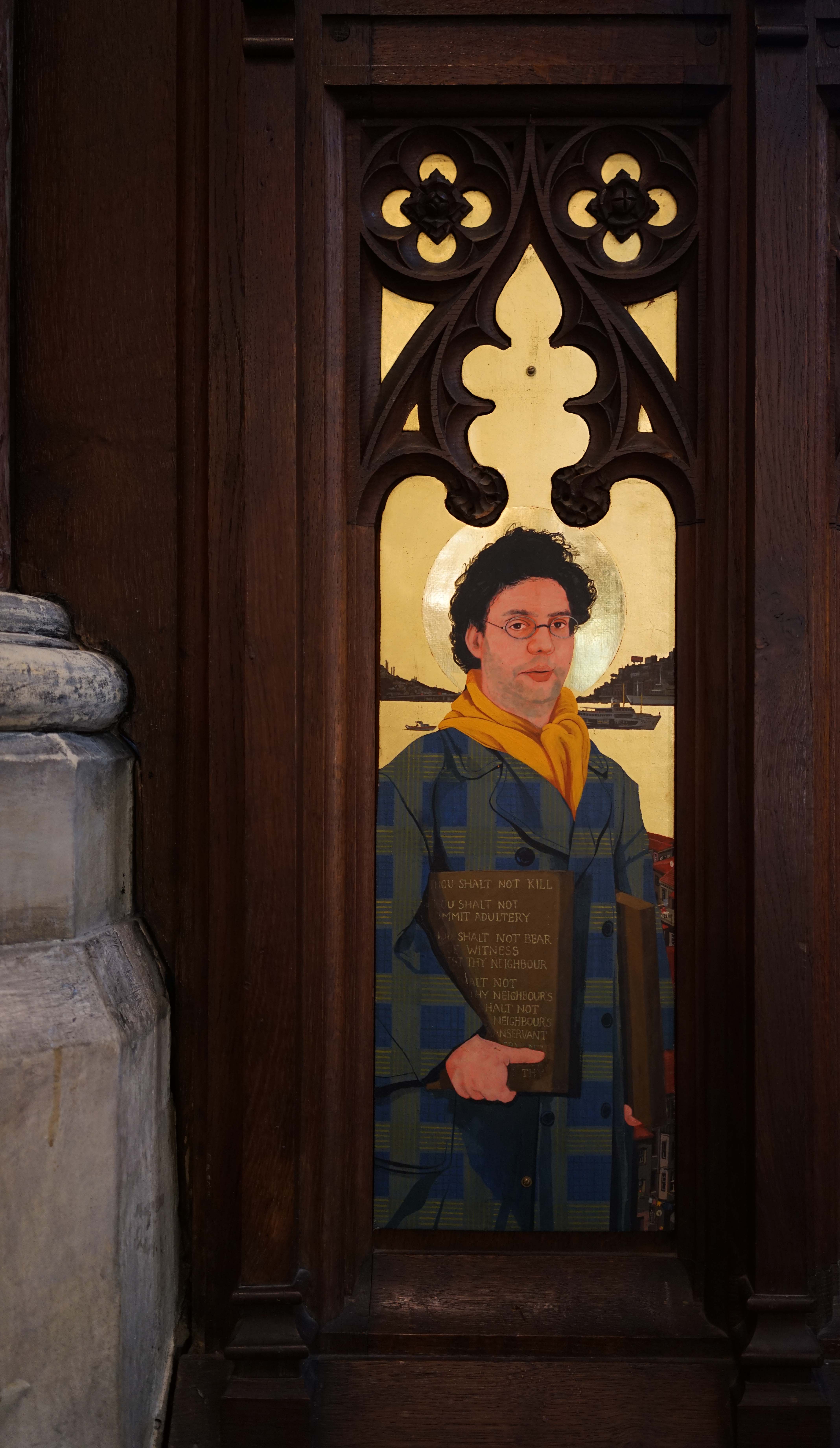 Moses, the most important prophet in Judaism and also important to Christianity, Islam and a number of other Abrahamic religions, is depicted holding the Ten Commandments. As a model for the Old Testament prophet, McCosh chose the journalist Andrew Finkel, thinly disguised by a five o'clock shadow. Andrew has lived in Istanbul for much of his life and is author of a much-awaited novel.

Alice Carswell, the late wife of the artist, a teacher and an environmentaslist who died tragically young, represents St Hilda of Whitby, one of the early saints of England, who tried to unite the Celtic and European traditions with the calendar used for Easter. Alice’s friends planted a tree for her in the Remembrance Garden at Bosphorus University.

This is St Cuthbert, representing the Celtic tradition. He is Niall Chadwick, a close friend and benefactor, seen holding the chapel of All Saints Moda on the Asian shore, which Niall loved. Niall also died young, the same year as Alice, and here he is a suitable representative of the Celtic tradition, having been brought up in the Church of Ireland. 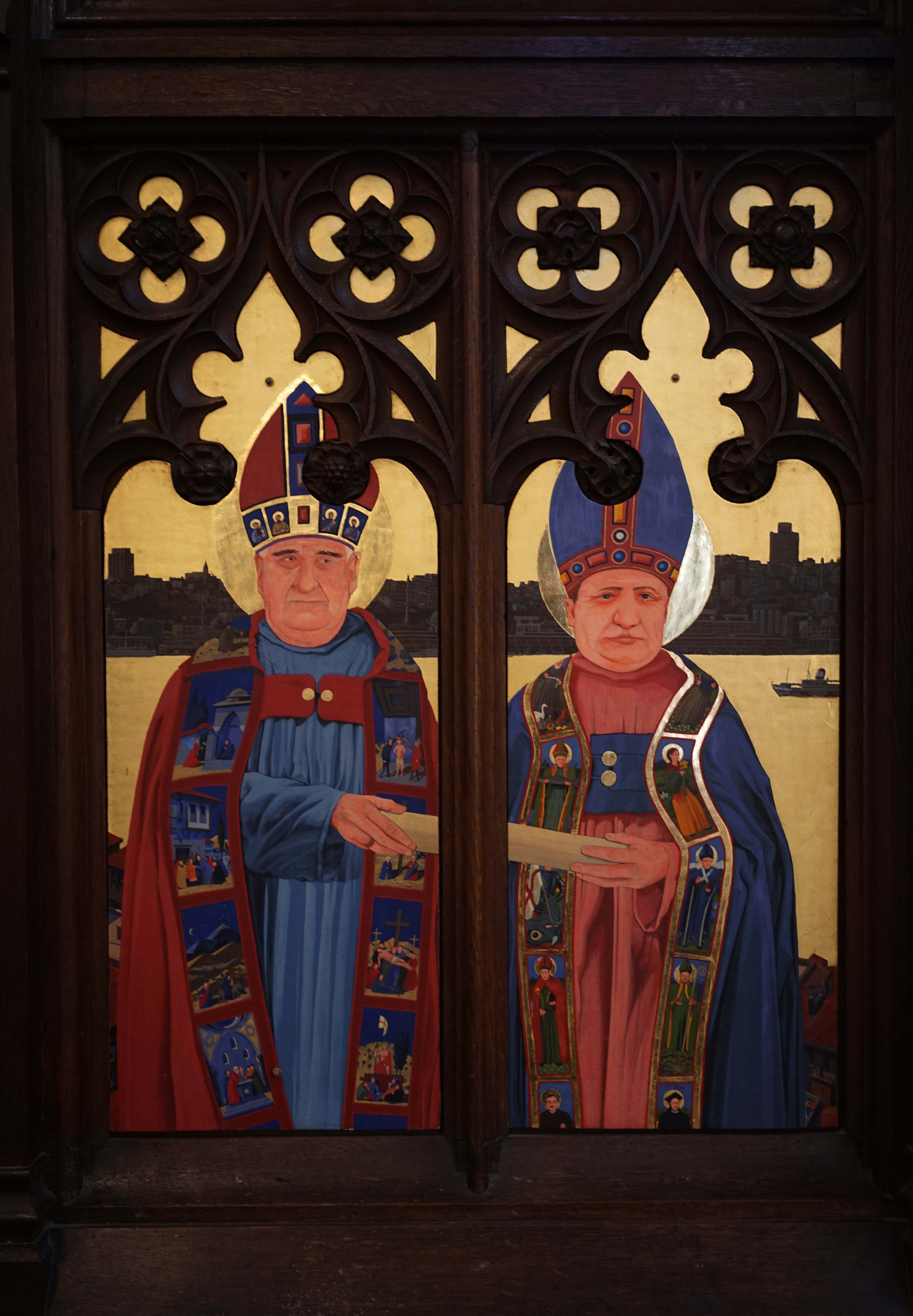 We’ve talked about St Hilda, who brought together the Celtic traditions of St Cuthbert and the Roman tradition introduced by Augustine of Canterbury.

Here we have St Augustine, on the left, represented by Michael Ramsey, Archbishop of Canterbury and author of a seminal work, The Gospel in the Catholic Church. Next to him Pope John XXIII represents St Gregory the Great of Rome. It was St Gregory who sent Augustine to England to establish the Church of England, as we now call it.

On Archbishop Ramsey’s robes you can see scenes of the Gospel such as the Nativity, the Crucifixion and the Resurrection. Pope John XXIII’s robe shows the saints of the British Isles: Saints George, Andrew, David (with his daffodil) and Patrick, patron saint of Ireland (who looks a bit like me, Ian, when it was painted). St Mungo is also there. In the background you have the heavenly city of Istanbul, in fact a view of Beyoğlu. The Galata Tower is on left, and near it is Christ Church and Saint Antoine’s Church, The Marmara Hotel in Taksim is on the far right.

Then we have St Alban, the first recorded martyr of the British Isles, here represented by an unnamed friend of the artist. A Roman soldier, Alban was in bed at the time when he was seized for sheltering a Christian priest, so he has a nightshirt on. He put on the priest’s cloak pretending to be him, and was taken out and executed by the pagan Romans.

The face representing St Thomas of India is that of a Sri Lankan refugee who lived here for years. He used to love my pet rabbit, so he is portrayed with it. St Thomas is believed to have carried the gospel to India in the first century, where he founded the ancient Mar Thomist church. 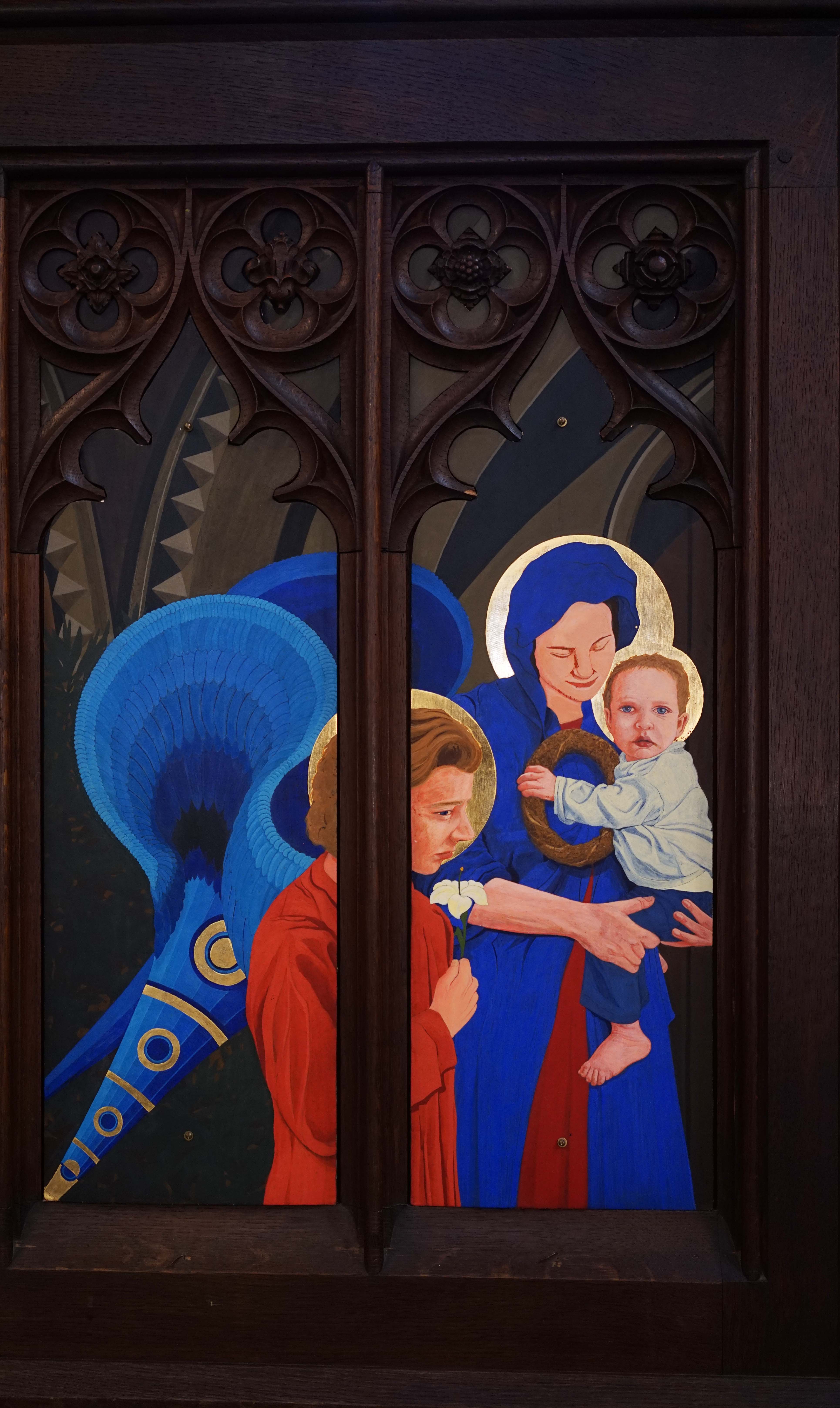 There is also St Mary the ‘Theotokos’. She is holding the Christ child. The baby is in fact the son of Jonny Dymond (now the BBC's royal correspondent, but then based in Istanbul), and his wife Hettie Judah. The child is is holding a circular simit (sesame bread) as the symbol of eternity. In front of them is St Gabriel the Archangel, with those wonderful wings. 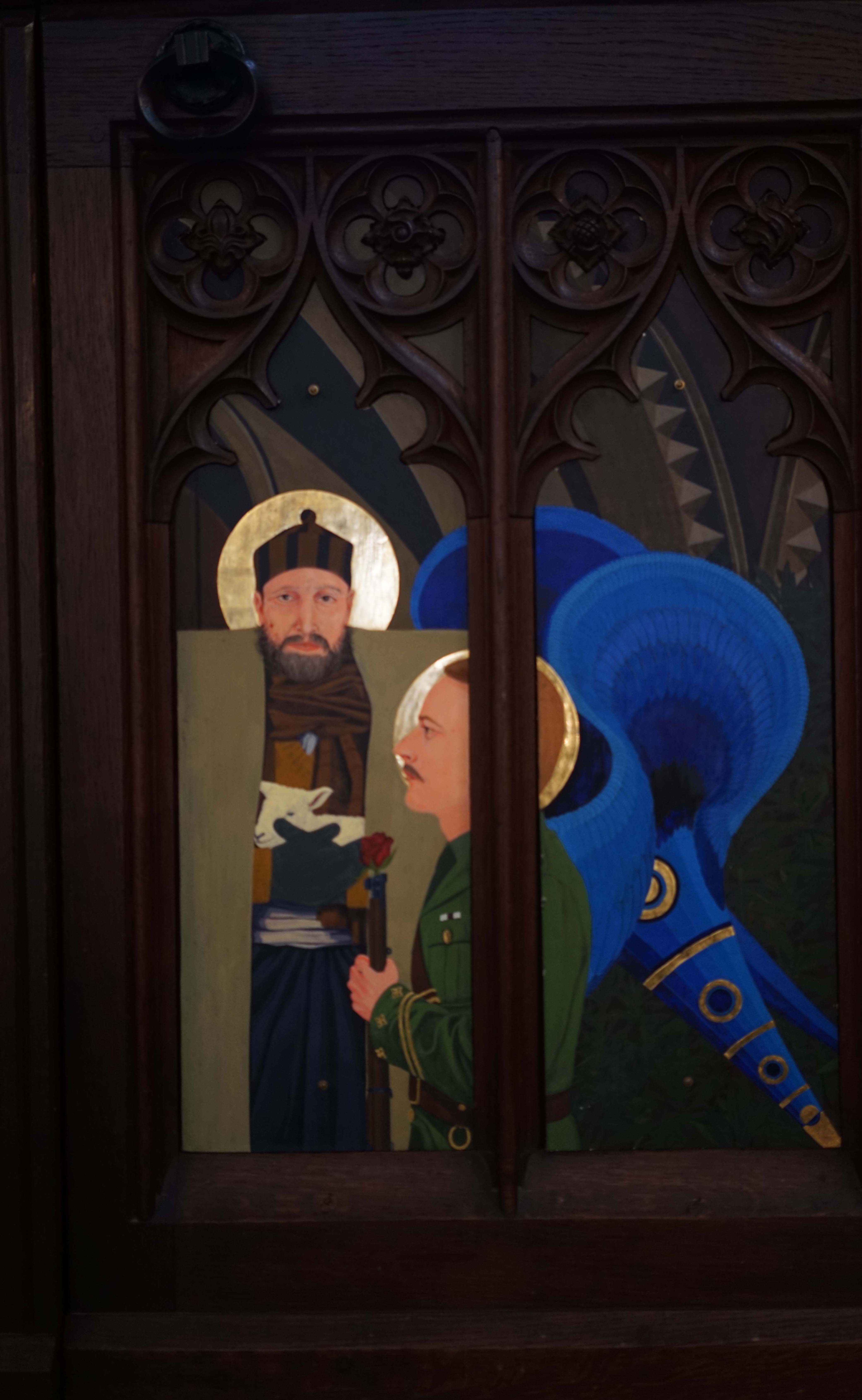 St John the Baptist is shown in one of those big, square Anatolian shepherd’s felt cloaks. You can see the doors of the porch of our church here symbolising the doors of Heaven replicated on these rood screen doors. St Michael the warrior Archangel is always shown in medieval pictures as a soldier, so Mungo has decided to show him as a Gallipoli soldier, whose face is in fact that of Mungo’s great uncle, with a rose rather than a bullet in his gun.

Izzy Finkel portrays one of the Seraphim that guard the presence of God.

John Drummond represents St Andrew the Apostle. Andrew is believed to have brought Christianity to Byzantium. He appears as a Bosphorus fisherman.

The current Ecumenical Patriach, Bartholomew, successor of St John Chrysostom, is shown as John Chrysostom in front of the old cathedral of Hagia Sophia. 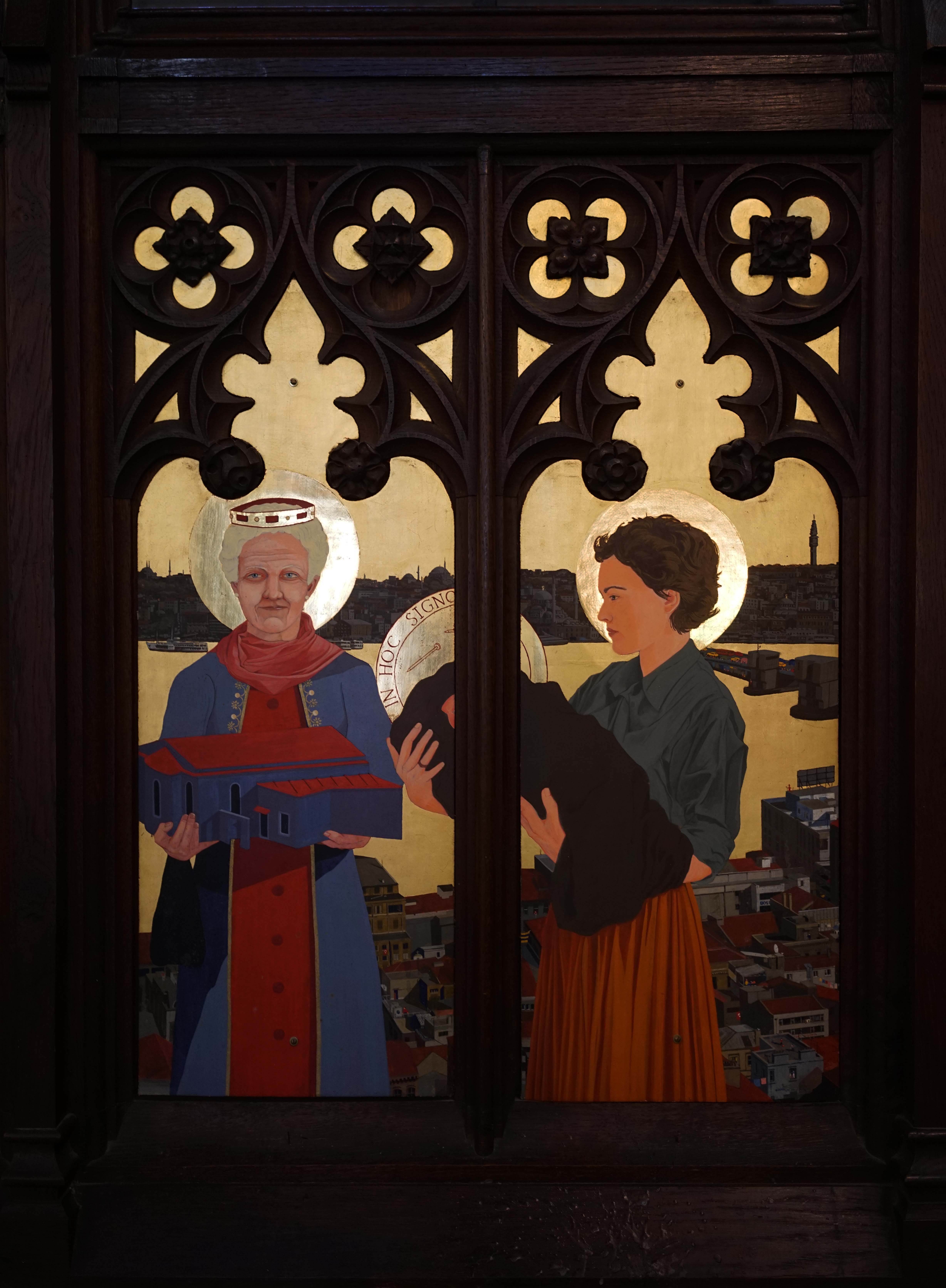 Hettie Judah represents Mary Sumner, a famous 19th-century English woman who founded a society called the Mother’s Union to support family life in England, and now throughout the Commonwealth. Mary Sumner is handing the baby Constantine to his mother, St Helena, c250–330. St Helena is holding the St Helena Chapel in the garden of the British Consulate. When Mungo painted this there was no gate there at the entrance from the older chapel yard; it was just a disused churchyard. Since then, for security, we have built a gate exactly where Mungo painted it – a sort of strange prophetic touch to all this work.

My friend Niall Chadwick (St Cuthbert) used to have a Citroen DS. If you look very closely you will see that Mungo has portrayed it being driven across the Galata Bridge.

Paul Ouyemi, a Sudenese refugee who is now in Canada, thank God, Paul represents Janani Luwum, the famous archbishop in Uganda who was martyred under Idi Amin. Archbishop Luwum is holding a bullet. Traditionally in Christian iconography, martyred saints hold the means of their death.

St Thomas Cranmer (1489-1556), the great English reformer, is holding the primatial cross of Canterbury. He was burned at the stake in Oxford in 1556. The face is that of one of our congregants, who was Church Treasurer at the time. 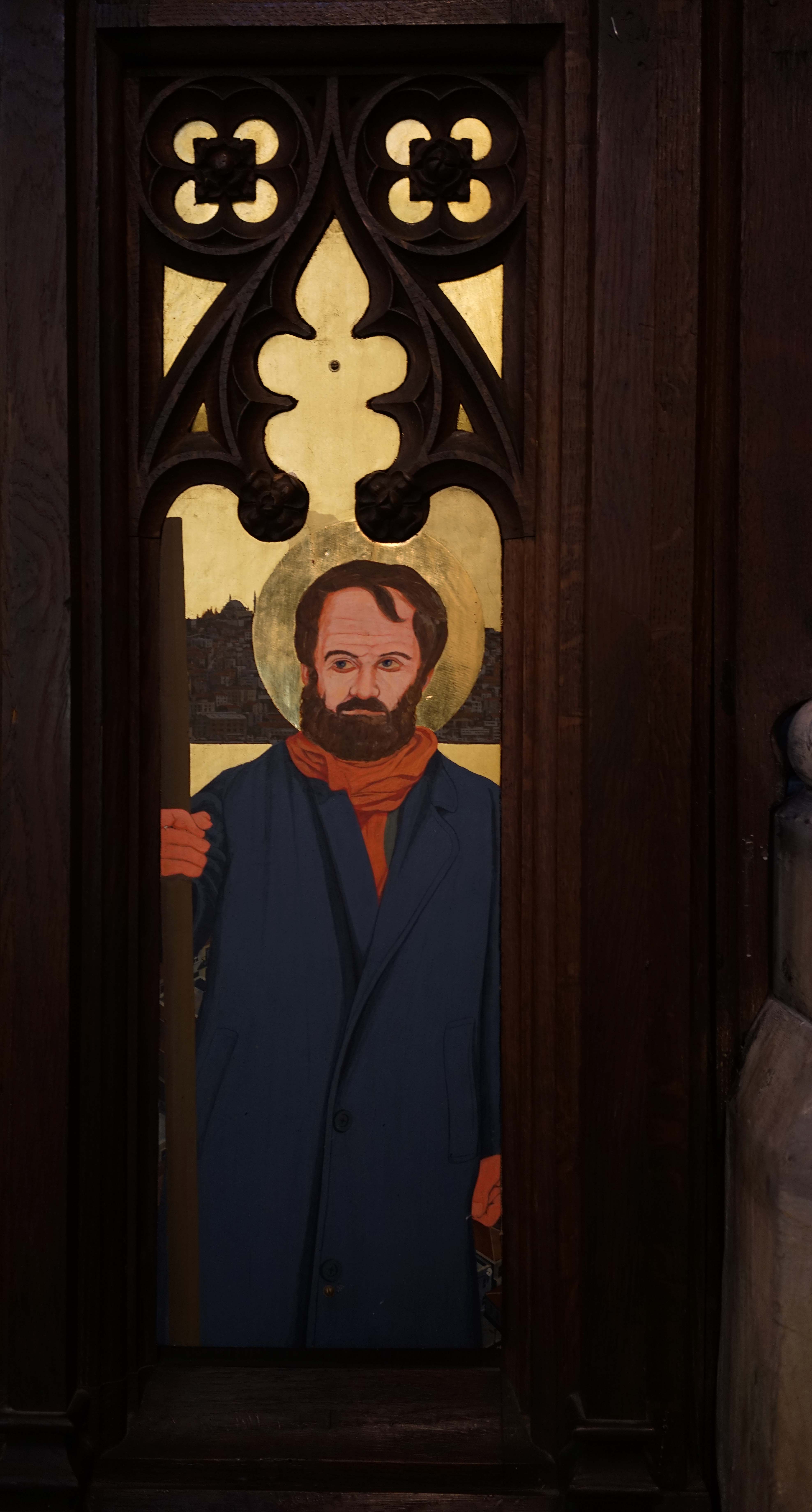 The Prophet Elijah completes the suite of saints represented on the screen. His is the face of Charles Brown from Tennessee, an ascetic American who lived in Istanbul, later became an Anglican priest, and now lives in rural England. 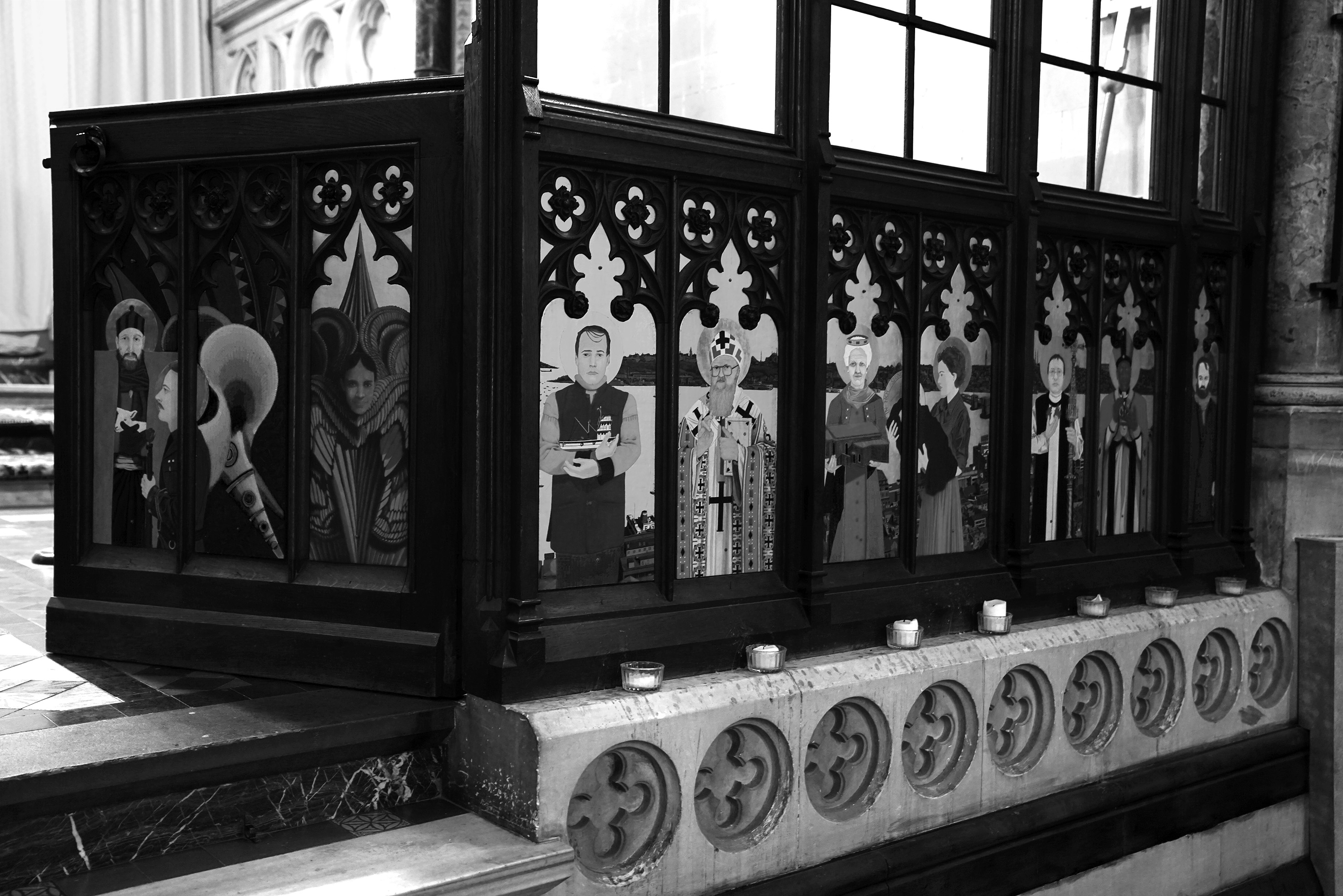 The screen itself was only put in after the Gallipoli campaign of 1915–16 as a memorial to those who died there. It actually completes the original architect GE Street’s plan for the church. It was constructed England and sent over. Later on, I found a letter from a priest in the 1920s who had been planning to decorate the screen in a similar way but never got round to it. 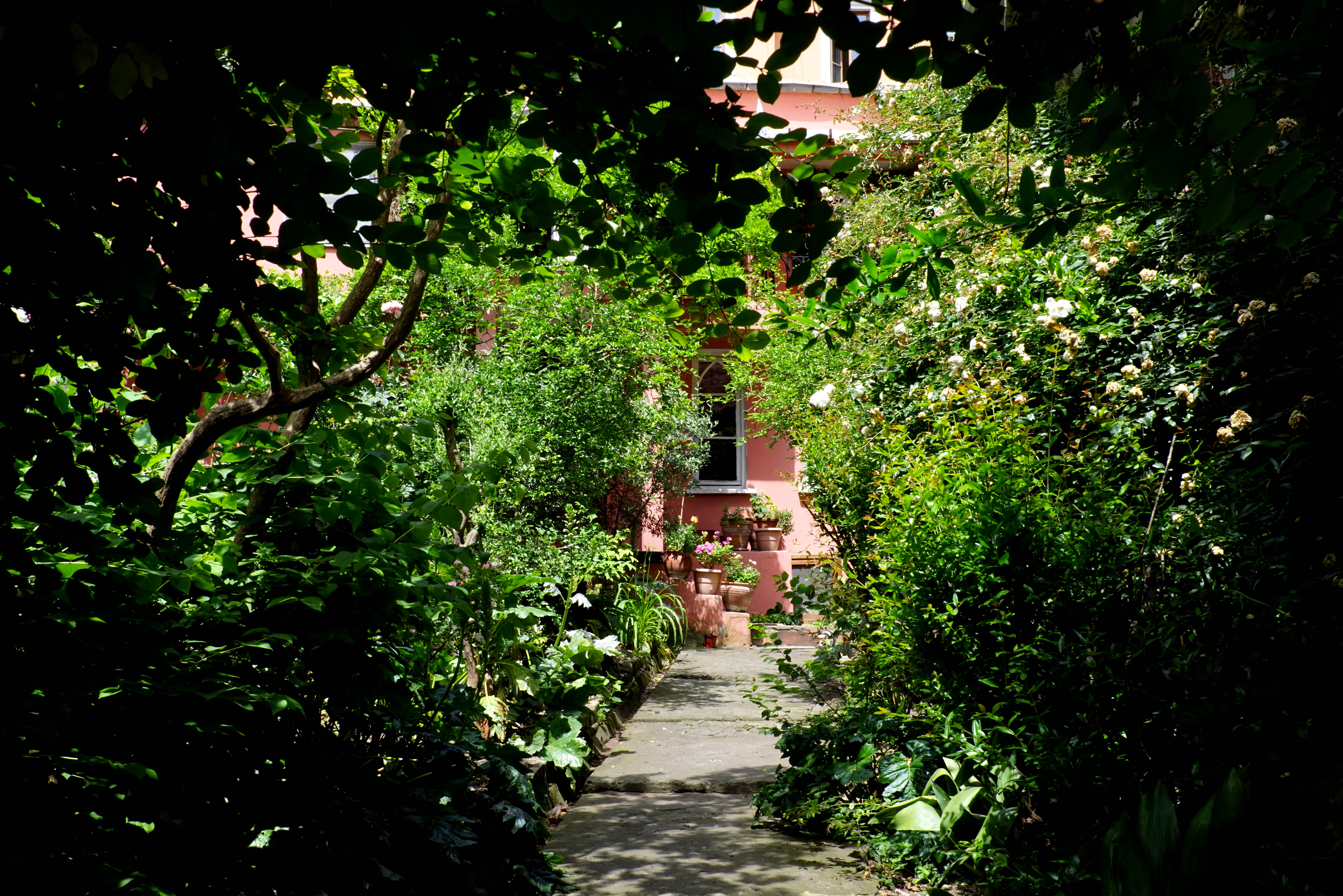 More of Mungo McCosh's work can be seen here.  www.mungomccosh.org

All photographs by Monica Fritz