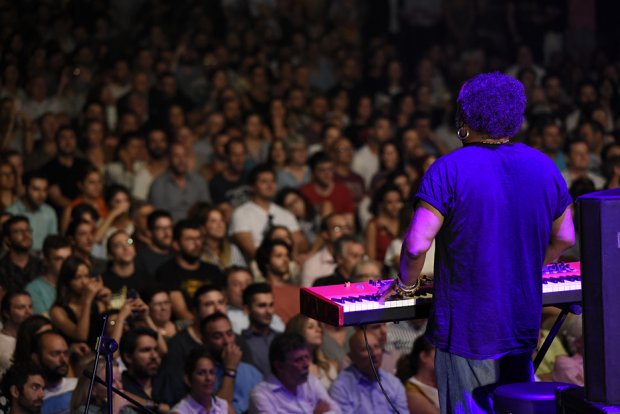 The New York-based band Snarky Puppy gave a concert at the UNIQ Open-Air Stage on Tuesday July 9. The supporting group was Shake Stew, an Austrian outfit. Whether the music was jazz-rock, or funk, or groove, is immaterial: in any case, I would not be able to tell you, for my exposure to this kind of music has been minimal. Not being familiar with any of these genres, I was not entirely convinced I had chosen a gig that would hit the right button, so to speak. But I had offered to take my visitors – an old friend from Oporto and his two nephews – to a concert during their stay, which coincided with the second week of the İKSV Jazz Festival, and rightly guessed that the nephews, who are in their 20s, would prefer something with lots of oomph and espièglerie, multiple drummers and extreme amplification. The phrase ‘oomph and espièglerie’, by the way, comes from the immortal pen of PG Wodehouse: these two qualities of character (espièglerie means mischievousness) are said to be possessed by Roberta ‘Bobbie’ Wickham, a character who appears in three Jeeves and Wooster short stories and one novel. Bobbie Wickham, daughter of the late Sir Cuthbert and Lady Wickham of Skeldings Hall, Hertfordshire, is ‘equipped with eyes like twin stars, hair ruddier than a cherry, oomph, espièglerie and all the fixings’. The downside is that she later turns out to be an indefatigable perpetrator of merry pranks, much to Bertie Wooster’s chagrin. When she and Bertie get engaged and subsequently break it off, he ruefully describes her as ‘a carrot-topped Jezebel’.

First to take the stage as the sky grew dark on the evening of July 9 was Shake Stew. (The sky was in fact a cloudy one, and that day we had been mercifully spared the frightful drubbings that the sun had been handing out of late; previously we had been learning what it feels like to be kâğıt kebabı – kebab baked in paper – the difference being that we were baked not in paper, but in our clothes.) The music of this seven-person outfit is described as ‘afrobeat and groove’. This means nothing to me, but may to you. There were two double-bass players, and I enjoyed their duets. Otherwise I found the performance anodyne rather than stimulating. I was gratified, however, to hear from the Portuguese youngsters when the set had finished that they had enjoyed the performance of the main drummer.

Here are two videos in which Shake Stew perform Shake the Dust and Moon Gong. Both have a marked North African flavour:

And so, as the moon played hide-and-seek in the clouds, Shake Stew took their leave and we sat waiting for Snarky Puppy to make their appearance. Before the concert I had set about finding their videos on YouTube, and had discovered that they have a certain originality that I find rather pleasing. They have been described as a ‘collective’ whose composition is fluid – with the exception of a few regulars, a different combination of musicians plays at every concert. And indeed the group that came to Istanbul was exceptionally large: I counted ten musicians on the stage initially, and more were added later on.

The advantage of having a large number of instrumentalists is that it allows you to create a variety of textures within any one song. In Snarky Puppy’s performances, just as in jazz, some improvisation is permitted, but everyone is very disciplined: boundaries are never overstepped, and no one musician attempts to dominate. As a result, the solos are allowed to blossom without intrusive competition, and everyone gets a turn to let rip unhindered. I noticed how appreciative the group members were of each other, and how much they seemed to be enjoying playing. In fact their general vibe was one of benevolence, and this communicated itself to the audience, creating a contented atmosphere.

Here is a video in which Michael League, the group’s founder (he describes himself as its ‘instigator’), explains his philosophy:

The next video should give you some idea of what they play:

For serious devotees, here is the entire Ground Up album. Binky, one of their most famous songs (it has quite a catchy tune to it), starts at 16:55:

Last but not least, some extracts from their live performances – which I myself prefer to their studio recordings – as well as biographical information (and a certain amount of promotional rhetoric, but not enough to spoil things). At 25:27, Michael League explains how he reacts to the rich informational input of jazz, and how mishearing things can inspire him (‘Hearing things wrong can end up being a moment of opportunity.’) This definitely struck a chord with me:

When the band finally got themselves set up and started playing, it was apparent that they have a considerable following in Turkey: they were greeted with evident enthusiasm. Mr League said hello to us in Turkish and followed this with several more sentences in the same language. I could tell that his accent was unusually good for a foreigner, though I must admit I did not catch half of what he said.

Towards the end of the concert, ten large cushions were placed in a row along the front of the stage. The reason for their presence was revealed when ten Turkish drummers came and sat down on them. There were six players of the bendir, a kind of drum that I believe originated in Iran, and four players of the darbuka, a Turkish hand-drum. Here is a video in which the bendir is explained (in Turkish) and demonstrated:

And now a recording of darbuka-playing:

Michael League explained to us that some of the songs on Immigrance, the group’s most recent album, had been composed in Turkey (that might explain why he could speak some of the language). Then the members of his group, together with the assembled drummers, played a series of numbers with a definitely Turkish feel to them. The audience thought they were wonderful and sang along, though I must confess I found them a little slow.

For the last half an hour or so, most of the audience stood on their chairs to get a better view of the stage, and there was quite a lot of coming and going as people moved around and through the rows to find better positions. What struck me was how well the young people in the audience behaved: in spite of a certain amount of pushing and shoving, everyone was good-humoured and considerate. In Britain, I reflected, by this time a good deal of drink would have been consumed, and tempers would have become frayed. What excellent social skills Turkish people have! How well they cope with the physical contact involved in moving around in a confined space! And how poorly basic human skills of this kind are valued and appreciated by us Brits and others in the West!

I was mightily relieved to hear that the two junior members of our party had enjoyed the concert. I think they meant it, though of course they would in any case have said nice things out of politeness, being well-brought-up young people. My friend Carlos and I did not stand on our chairs, and so could not see the source of the audience’s enthusiasm during the last half hour. But we took it all with good humour – something there was a lot of at this concert.

The experience I enjoyed. The music, perhaps not so much. But then, I am well over 60 – 186-and-a-half, to be precise – and can, I hope, be excused for lacking the stamina required for two-and-a-half hours of continuous grooving. What did me good was being among so many people who were living in their heart space. I am grateful to the Snarky Puppy collective for being the cause of my having that experience, to the weather for staying dry, and to the İKSV for inviting a group that are clearly much appreciated to play in their festival.