Soyoung Yoon and Mario Häring at The Seed 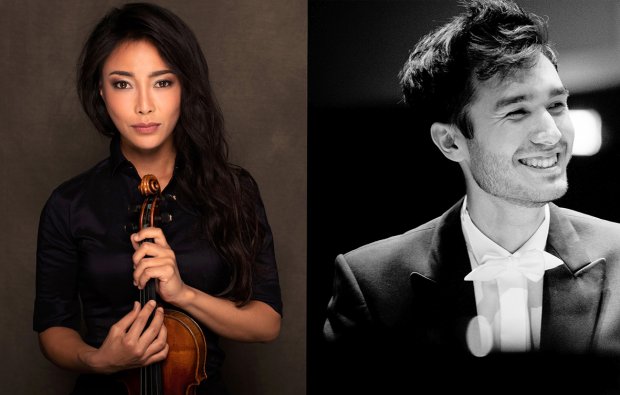 The Istanbul Recitals series continued on February 14 with a concert by violinist Soyoung Yoon (photo: soyoungyoon.com) and pianist Mario Häring (photo: Stephan-Röhl) at The Seed in Emirgan. Like last month’s recital by the cellist Alexander Chaushian, this one featured a stringed instrument – though this time with piano accompaniment. Throughout the first half, Mr Häring accompanied Ms Yoon on the piano; in the second, he played a Beethoven sonata before the violinist reappeared for the final piece. For someone sitting in the front row (and here I must express my thanks to Ms Nazan Ceylan, one of the organisers of these recitals, for making this possible), the solo piano item was, in a way, a welcome relief: the experience of being only a few feet away from a violin played with such gusto by a person of Soyoung Yoon’s skill was quite overwhelming, and needed to be taken in small doses for fear of synaptic overload.

Soyoung Yoon, a 36-year-old native of Seoul, began playing the violin at the age of five, and after studying at Yewon Middle School for Arts and at Seoul Arts High School she completed a course at the Korea National University of Arts. She then went off to Europe, where she attended the Hochschule für Musik in Cologne; this was followed by tuition from Zakhar Bron at the Zurich University of the Arts. Her awards include First Prize in the Yehudi Menuhin Violin Competition in 2002 (at which time she was only 17) and in the Henryk Wieniawski Violin Competition in 2011. She currently leads the Basel Symphony Orchestra and gives chamber music concerts with the Orion String Trio, a group she founded. In this video she plays Sibelius’s Violin Concerto in the Henryk Wieniawski Competition:

Mario Häring, who comes from a German-Japanese family of musicians, was born in Hanover in 1989 and grew up in Berlin. Like Soyoung Yoon, he began playing his chosen instrument at an early age – in this case, three. His teachers included Prof. Fabio Bidini (at the Julius-Stern-Institut of the University of the Arts in Berlin), Prof. Karl-Heinz Kämmerling (at the Hochschule für Musik in Hanover) and Prof. Lars Vogt. He is currently a scholarship holder at the International Music Academy in Liechtenstein. Mr Häring made his début with the Berlin Symphony Orchestra in 2003, at the age of 14, and in 2018 came second in the Leeds International Piano Competition. Here is a video of him playing Beethoven’s Piano Concerto No 1 in the final: 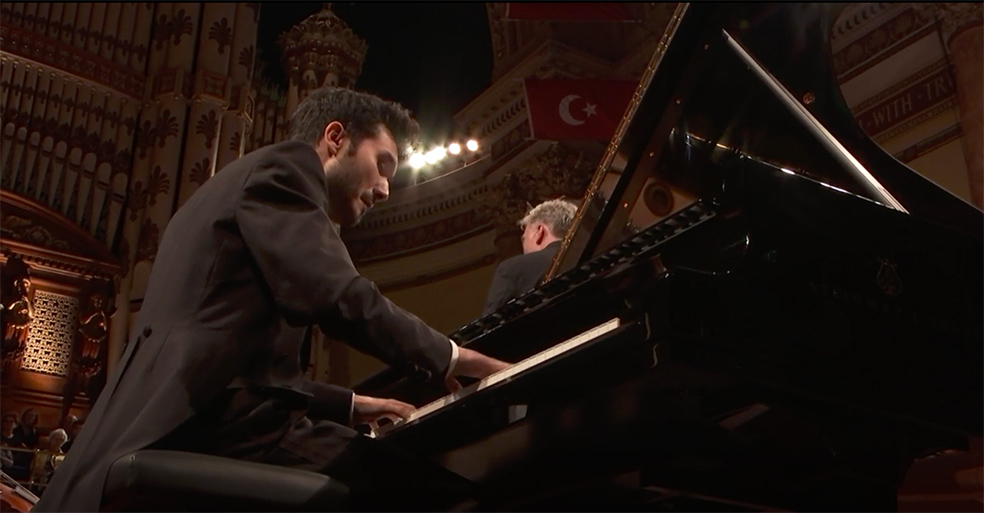 Ms Yoon certainly knows how to make an impression: she walked onto the platform in Emirgan wearing a glitteringly besequinned dress. When the first notes of Dvořák’s Romantic Pieces were sounded, I had difficulty believing it was actually a violin she was playing, and not a viola: among the adjectives that come to mind in relation to her tone are low-slung, feisty and full-throated. In fact, I half-expected her to launch into a hectic Hungarian czardas at any moment. But in the four Romantic Pieces, composed in 1887, Dvořák is far too restrained to permit any such indulgences. Here these pieces are played by Josef Suk, grandson of the composer and violinist of the same name, and great-grandson of Dvořák himself:

I hope I may permitted to observe that in the last piece, Mr Dvořák extends a valid musical idea beyond its natural limits. With that ungenerous quibble out of the way, I will record that in Ms Yoon’s performance the high-register notes at the end of the second piece were mouth-watering and heart-string-tweaking at the same time. Mario Häring, meanwhile, proved an excellent accompanist – always sensitive, never intrusive. In the fourth piece Soyoung Yoon’s timbre in the double-stopped notes was so powerful that it occurred to me she might be able to take on a full orchestra and win.

When the duo left the stage at the end of the Dvořák I wondered whether one or both of them was a heavy smoker, and was desperate for a cigarette. (I gather that Nikolai Demidenko, the soloist last November, is a smoker, but he made it through each half of his recital without recourse to nicotine.) If my surmise is incorrect, I duly apologise. However, we are all human – and as Nietzsche once remarked, ‘In trying to become more than human, we become less.’

The second piece on the programme was Brahms’s lyrical Violin Sonata No 2, written in Thun, Switzerland, in the summer of 1886. Brahms apparently found the area extremely congenial. He said it was ‘so full of melodies that one has to be careful not to step on any’. The sonata is in three movements: Allegro amabile, Andante tranquillo (this one has scherzo episodes marked Vivace), and Allegretto grazioso (quasi Andante). In the following video, the sonata is played by David Oistrakh and Sviatoslav Richter:

In this work, Ms Yoon once again produced a satisfyingly robust tone – the copper-bottomed kind that grabs you by the lapels (and the emotions) and shakes you. I find these melodies extremely memorable – even the incidental parts that are not main themes. The relaxed but slightly wistful second movement, with its occasional lapses into joie-de-vivre, was a real treat, especially the high-register passages. I did notice that the musicians’ coordination in the pizzicato section was less than perfect. None the less, this was a full-blooded performance, and one to remember.

Then followed an interval – during which some members of the audience turned on their mobile telephones and then forgot to turn them off again. There were two beeping interruptions when the music re-started. It might, in fact, be sensible to repeat the announcement about turning the wretched things off at the beginning of the second half of each concert, as they do in concert halls such as the Wigmore Hall.

As I have previously remarked, it was a good idea to provide some relief from the intensely pleasurable – but none the less overwhelming – experience of listening to Ms Yoon’s violin-playing before she came back on the stage for the last item. William Blake understood the need for a break in circumstances of this kind very well: in his Poems from the Notebook, he says: 'Grown old in love from seven till seven times seven / I oft have wish’d for Hell, for ease from Heaven.'

This is not, of course, to suggest that Mario Häring’s playing in Beethoven’s Sonata No 4 was in any way akin to the lower regions rather than the higher. A product of the German school of pianism, he showed himself able to muster an appropriate degree of weightiness – though his facial expressions (he tended to look straight ahead, as if following a book of music in front of him) betrayed nothing but enjoyment.

This sonata was written in 1796 during a visit to Babette, the Countess Keglevics, at her palace in Bratislava, and it is dedicated to her. Sometimes called the ‘Grand Sonata’, it is one of Beethoven’s longest. Here is an account of the work by James Reel from the ‘AllMusic’ website.

And now, here is a recording of the work being played by Claudio Arrau:

Mr Häring shone in the second movement, which begins in the heavy-browed, sit-up-straight-and-pay-attention mode that Beethoven did so well. It seems that even at this early stage in his career (the sonata was written in 1796) he was capable of producing the kind of heavyweight quasi-recitativo slow movement that we see later in his Piano Concerto No 4. And, of course, it is in C, one of the keys Beethoven used to great effect (though in this case it is the major rather than the minor). Perhaps, indeed, I should rephrase the first sentence of this paragraph: rather than saying that Mr Häring ‘shone’, it might be more appropriate to say that in this movement he fulminated, this word being more in keeping with the music’s predominant vibe. The third movement, I thought, could have benefited from a little more evenness in the running passages, but the performance as a whole was a success.
Then Ms Yoon reappeared for the last item, which was Béla Bartók’s Romanian Folk Dances. This work was originally written for piano in 1915, and was arranged for orchestra two years later. The version for violin and piano was made by the Hungarian violinist and composer Zoltán Székely. The six movements are as follows: Stick Dance, Sash Dance, In One Spot, Dance from Bucsum, Romanian Polka, and Fast Dance. Here is a YouTube video of a performance by Vadim Repin and Nikolai Lugansky with the score of the violin part (which someone seems to have scribbled on):
Ms Yoon’s playing was so powerful that the hairs on the back of my neck stood on end: every stroke of her bow was pain and pleasure ground up together in a crucible and heated over a volcano. (The Almighty really should invite her to play during the Harrowing of Hell.) After the performance I was left gasping and unable to rise from my seat for several minutes. It was a good thing the audience took a long time to disperse, or I might have had to be shooed out by the cleaners.
And so ended yet another superlative Istanbul Recital. The next one, scheduled for March 14, is to be given by the British pianist Imogen Cooper. On her programme are Schubert’s Moments Musicaux, a selection of Chopin’s Mazurkas, and Schubert’s Sonata in G major, D894.
Posted in Music & Performing Arts, - Classical Music, - Musical Shares