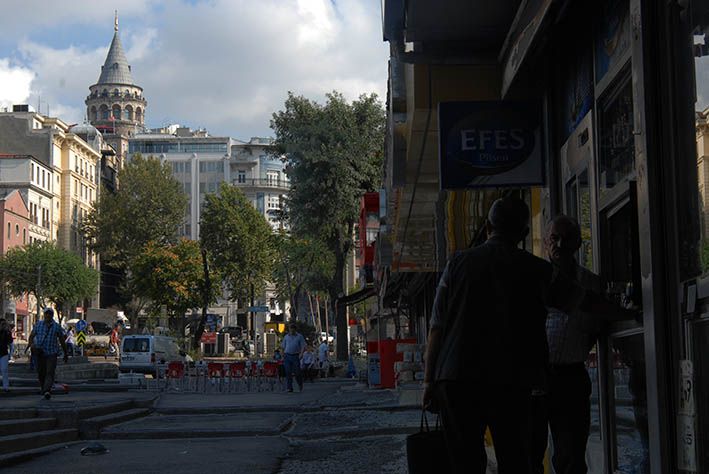 The districts that form the  entrance to the old European quarters is still a hive of metal workers and light shops, docks and brothels, schools and churches, banks and tax offices, with nightclubs lurking among the anchors and the pots and pans. Between the two bridges (the Galata Bridge and the Atatürk Bridge – now joined by a hdeous new third metro bridge with mercifully-not-golden horns) is Perşembe Pazarı, the wonderful hardware district. Above it old Bankalar Caddesi, full of light shops, and home to SALT Galata, the majestic former Ottoman Bank, now an arts centre, climbs the hill to Beyoğlu. Along the shore of the Bosphorus Karaköy proper is a grid of 19th- and early-20th-century streets and extends all the way to the district of Tophane, where the grandest private art galleries and the modern art museum Istanbul Modern has opened in former warehouses.

Curiously placed among all this work-a-day tangible functionality are the headquarters of Turkey’s major banks. The former home of the Ottoman Bank (a fascinating institution that was originally private and British-owned, and won the tender to become the Ottoman central bank, thus becoming the state’s public kitty and main creditor simultaneously) has been renovated into SALT Galata, a more research-orientated sister space to the one in Beyoğlu.

The Camondo steps are baroque reminder of the area’s former prominence, which looks as though it might return quite soon.

Some of the most interesting new art spaces have opened in the backstreets of Karaköy near Istanbul Modern. These include the conceptual art gallery Mana, which opened in 2011. Photography specialists Elipsis also moved here from Tophane. The galleries are peppered amongst chic cafés and bars, giving the neighbourhood an achingly bohemian vibe. The cream of the crop is Karabatak Café, serving up perfectly brewed Julius Meinl coffee and treats. Also try Ops and Muhit, behind the Kılıç Ali Paşa Mosque.

From İstiklâl take the ‘Tünel’ underground. Otherwise use the tram. Driving is usually a nightmare.

This the key starting-point and traffic hub for Karaköy, and the easiest place to orientate yourself when exploring the Galata Docklands. With your back to the Galata Bridge, turn left along Tersane Caddesi for the traditional hardware markets of Perşembe Pazarı; straight ahead up Bankalar Caddesi or the steep Yüksek Kaldırım for SALT Galata and the narrow Genoese lanes that cover the hillside below the Galata Tower, and right (east) for Karaköy proper with its many restaurants, which emerges along the Bosphorus shore in Tophane. At the other end of the Galata Bridge are the domes of Eminönü's Yeni Cami and the bazaars – a 10-minute walk or a miniute's tram ride.