Turn your back on the Old City and make for the water. Andrew Finkel takes a drive along the Bosphorus’s lower shore, from the half-abandoned docks of Karaköy, past mammoth cruise ships and hangars for modern art, to the palaces of Beşiktaş and Ortaköy. Philip Mansel introduces the fin-de-siècle world of Abdülhamid II. Berrin Torolsan explores the pavilions and gardens of Yıldız Palace. Özge Yıldız deciphers Abdülhamid’s astonishing Yıldız Mosque. Photographs by Fritz von der Schulenburg, Cafer Türkmen, Brian McKee and Jürgen Frank

Port to Palace
By consensus, the Bosphorus begins at Karaköy – which means standing on the other side of the Galata Bridge across the Golden Horn, turning your back on the classic Istanbul view of the skyline of the historical peninsula at the confluence of the Golden Horn and the Sea of Marmara. The problem is that as you walk “upstream” against the current, the view of the waterway quickly disappears in an interesting warren of streets which have become a boho sanctuary in anticipation of the developers’ wrecking ball. The waterfront itself is concealed by the passenger-liner terminal and a wall of cruise ships.

It is not until Tophane (the Armoury) that the view opens up again between an impressive 18th-century fountain and the Kılıç Ali Pasha Mosque (1580). It quickly vanishes again behind the post-war red-brick custom sheds, a reminder that this was once a hard-working harbour. The Istanbul art world has appropriated some of these buildings as exhibition halls; the popular Istanbul Modern (istanbulmodern.org) is here, and a new Museum of Painting and Sculpture opens next year…

YILDIZ PALACE
The Last Ottoman Palace: Farewell to Empire
On these pages, introduced by Philip Mansel, we explore the earthly paradise Abdülhamid II was later forced to abandon: Yıldız Palace, its park and mosque

A World of His Own
Abdülhamid II amazed his subjects by retreating behind high walls on a hilltop above Beşiktaş, taking his court and government with him. Here he created a city within a palace – in part with his own hands. In a two-part feature, Berrin Torolsan tells the story of the palace, its park and its guesthouse. Photographs by Fritz von der Schulenburg 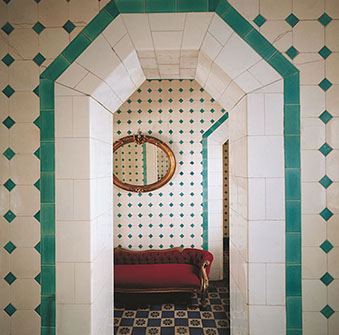 …However limited, a tour of the Palace Museum still gives a hint of a very private world – the Belle Époque theatre where Sarah Bernhardt played, its stage raised high above the stalls to be closer to the sultan’s loggia; a gallery of his personal treasures, such as the gilded replica of the Ahmed III fountain at the Topkapı; his carpenter’s bench (the tools set out); and his hamam, brightly clad in turquoise and white tiles…

A Willkommen on the Hillside
Abdülhamid spared no expense in impressing his guests. In the park at Yıldız, he created for Kaiser Wilhelm II a chalet-style house with lavish interiors to show off the empire’s latest carpets and porcelain. By Berrin Torolsan. Photographs by Fritz von der Schulenburg

The woods of Yıldız Park are a blessed relief after Istanbul’s concrete jungle, and a popular picnic spot, with lakes, grottoes and kiosks. Yıldız was an imperial garden city akin to the palace of a Japanese emperor. Abdülhamid’s interest in gardening went back to his youth, when he lived in the Maslak Kasırları on the edge of the Belgrade Forest. His camellias survive there in the winter garden. Plants and flowers adorned tables at receptions – he preferred potted plants to stuffy palace furniture. German, English and Swiss gardeners created delightful naturalistic corners, with occasional scented herbaceous borders and meandering shady paths. Landscape gardeners set lodges, pavilions, fountains and kiosks amid beautiful parterres, ponds and water features… At the very top of the park, is Abdülhamid’s most astonishing legacy – a time warp hidden by high retaining walls that you will often have entirely to yourself. The grand wooden Şale Köşkü (Chalet Kiosk) is where Kaiser Wilhelm stayed three times. Today, very few visitors find their way there.

Star Turn
The only time Abdülhamid’s subjects could glimpse their sultan was when he emerged from seclusion on Fridays to pray at his radiant new mosque outside the palace gates. It is now a little-visited gem: a unique study in 19th-century Orientalism, with a Gothic twist. By Özge Yildiz. Photographs by Fritz von der Schulenburg

For Beyoğlu, Nişantaşı and Beşiktaş, including the beautiful Ihlamur Kasrı and the Yahya Efendi shrine between Beşiktaş and Ortaköy, see Cornucopia 51. For the Old City and the Golden Horn, see Cornucopia 50