From sea to shining sea

Continuing our tour of Bosphorus villages, we cross back to a more untamed Asian shore. Heading upstream again, we start in Beylerbeyi and Çengelköy, with their grand views of the Old City, and make for the fortress of Anadoluhisari, where the Bosphorus narrows and the yalis are at their most captivating. Our journey ends on the hilltop of Anadolukavağı, with the Black Sea in our sights

BEYLERBEYİ TO ANADOLUHİSARI: THE ART OF IDLING Sir Steven Runciman, historian of the Crusades, wrote in his 1991 memoirs, A Traveller’s Alphabet: “I cannot in my heart approve of the great new bridge across the Bosphorus… No man, I think, should join continents God has put asunder. But in the misty light it had great beauty.”

Until the opening in 1973 of the First Bridge – designed by a Scotsman, Bill Brown, who had built Edinburgh’s Forth Road Bridge and lived in Bebek – the Asian shore had remained largely untouched by Istanbul’s boom and bust. It was karşısı, the “other side”, reached by boat or ferry. Despite the ensuing havoc, exacerbated by bridges two (the Fatih) and three (imminent), it still has something of the old air. The road frequently disappears behind yalıs, and it is tempting to step onto a boat and let the captain do the work. But you can also take a series of strolls, hopping in and out of buses, minibuses or taxis as you hunt for places to indulge in a little keyif – the Ottoman art of idly enjoying nature.

An Istanbulkart, a widely available smart card, is essential for the buses, and small change for minibuses. The bends make a standing ride good exercise in itself. The villages still feel like real villages. And there are gorgeous places to pause. Exploring the Bosphorus is not about ticking off sights. Owners of the old yalıs chose between waterside window and hilltop belvedere. Today you can do the same, just about. 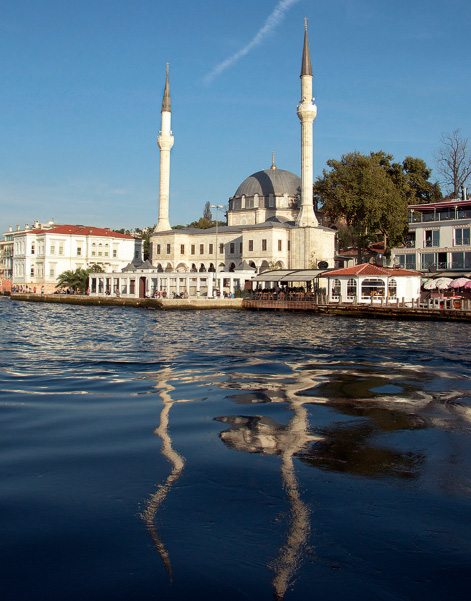 The waterside mosque in Beylerbeyi built by Abdülhamid I in the late 18th century for his mother. Photograph: Brian McKee, 2014, Cornucopia 52

Beylerbeyi – history reinvents itself
Beylerbeyi’s leafy hillside neighbourhood is comfortable and modern, without the genteel rakishness of Kuzguncuk, to the south of the First Bridge. While Kuzguncuk’s main street runs at right angles to the shore, so is not a busy through road, in Beylerbeyi traffic cuts off the residential side of the village from the water. But it does have a pretty harbour and a pedestrian quayside – a mini version of Ortaköy across the water – as well as the eponymous summer palace five minutes’ walk from the centre. There is also a good, if slightly run-down, hamam attached to the late-18th-century Hamid-i Evvel Camii (Hamid I Mosque) on the water.

Silent splendour
Abdülaziz’s summer palace in Beylerbeyi is gloriously unmissable. The great rectangular block may stand in the shadow of the First Bosphorus Bridge, but its formal garden is surprisingly silent, and the creamy stonework glows in the evening sun as it sets behind the minarets and domes of the Old City. This splendid pile, built between 1863 and 1865, should be your first waterside stop.

Çengelköy – bay of delights
Çengelköy is on a broad, sheltered bay, facing south and west, with the dreamy silhouette of the Old City on the skyline. In winter the trees hang heavy with cennet hurması (persimmons) that turn into a gooey, natural Turkish delight.

The village was always ramshackle, but it had rustic charm. Even a decade ago, country lanes led over the hills between cypress groves, bubbling springs and drystone dykes. A few of these secret paradises can still be found between Çengelköy and the Rasathane (Observatory) above Vaniköy, though a new presidential compound has seen the crude rebuilding of the whimsical hilltop köşk of the last sultan, Vahdettin. Çengelköy’s glory is its yalıs.

Don’t look too closely at the Bostancıbaşı Yalı, now a pudding shop. It was ruined by restorers in the 1980s and rebuilt in concrete – the beauty of these wooden structures resides in their very frailty. Stand on the pier beside it to admire its neighbour instead. The Sadullah Pasha Yalı, the archetypal 18th-century seaside house, is the real thing, even if its late owner, Emel Esin, a scholar of Turkic heritage, took theory a little too far, stripping away the wings to leave only the selamlık, the essential Central Asian “tent”.

Kuleli – might and main
First hopping-off point after Çengelköy is the quay of Kuleli, just upstream from the hotel Sumahan on the Water. The Kuleli Military High School is a striking piece of mildly Habsburg architecture with a fine vantage point, a heavenly spot for some fishing. With its distinctive turrets, Neoclassical portico and a fresh coat of paint, it is the most handsome public building on the Bosphorus. Its name, from kule (tower), refers not to the 19th-century turrets but to the tower of a 6th-century Byzantine monastery, originally a refuge for prostitutes called Metanoia (Repentance) set up by Theodora, Emperor Justinian’s wife, herself a former courtesan.

A view of Vaniköy
North of Kuleli, the road cuts inland behind Vaniköy, which is little more than a row of yalıs with an attractive mosque. They have suffered from a decade of affluence. The reconstruction of the Ahmed Nazif Pasha Yalı, built for Adülhamid’s minister of finance, is scandalously heavy- handed. The Mahmud Nedim Pasha Yalı, home to Abdülaziz’s envoy to Vienna, has fared better, though it was in good condition and never needed tearing down…

If you are in a boat, savour a gem that got away. The tiny Germen Yalı could be a pavilion at Yıldız Palace (see The House that came out of the Blue, by Patricia Daunt, in Cornucopia 21). Abdülhamid gave it in 1897 to his brother, the future Mehmed V Reshad, for his wife, Mihrengiz. The yalı by the mosque is the home of Suna and İnan Kıraç, founders of the Pera Museum. It is a refined 1966 take on the classic yalı, designed by Sedad Hakkı Eldem, whose two-volume The Yalıs of the Bosphorus (1993 and 1994) is a record of every known yalı…

Top billing for Kandilli
Kandilli means ‘the place with lanterns’, though even in Ottoman times the origin of the name was uncertain. By 1583, when Murad III planted terraces of tulips and hyacinths above the rocky point, Kandilli was a favourite privy garden. In 1704, Ahmed III inherited an array of pavilions here – a lead-roofed kasır (mansion); a fishing kiosk; a domed pavilion to sleep in; a kafesli köşk (screened pavilion) for his harem; a pavilion for the palanquin; a queen mother’s pavilion; and, up in the woods, for listening to birdsong, the Bülbül Köşkü (or Nightingale Pavilion)…

Anadoluhisarı – charm offensive
Anadoluhisarı has a modern cosmopolitan glamour and buzzes in the evening amid the vapour of a thousand electronic cigarettes (writes Harriet Rix). The most important people to know, however, are not the trendy barmen or the chef at the fish restaurant just below the fortress itself, but members of the small boatmen’s cooperative, who will take you across to Rumelihisarı and back, or up and down the stretch of yalıs either side of Anadoluhisarı, in their small boats. Turn left down the cobbled street towards the Göksu river, just before the fortress wall cuts across the road. The boatmen will be sitting waiting in the shade, drinking tea.