Store > Books > The Nature of the Early Ottoman State 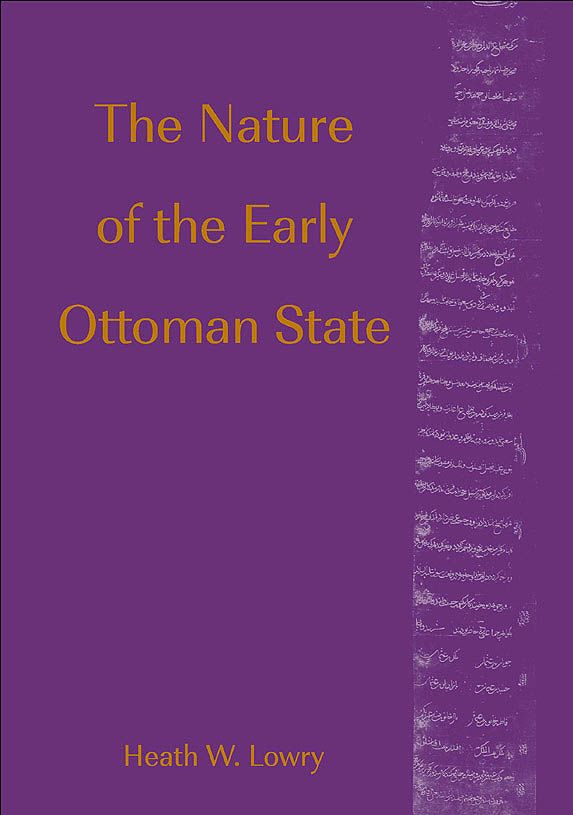 The Nature of the Early Ottoman State

Efendi is probably the best-known honorific of the Near East. Its origin is Greek. In 1453, conquering Constantinople, Mehmet II did not persecute the Orthodox Church. Far from it – it became the greatest landowner in the empire. The charter addressed the Patriarch in Greek, as “Megas Authentes” (Great Sovereign). The Turkish ear turned this into efendi, just as it turned “Palaeocastron” into Balıkesir or “Prokopi” into Ürgüp (in Cappadocia). Such, at any rate, is the claim made by a Greek historian, Dimitri Kitzikis, in a little book, L’empire ottoman (1984, recently reprinted). Kitzikis’s book is knowledgeable, and rather a relief to read, because it is not one of those self-pitying Greek accounts. It states quite firmly that in the Ottoman Empire there was a partnership of Greek and Turkish elements.

The question relates to the central subject of Heath Lowry’s book on the first Ottoman century: was the early Ottoman state a sort of counter-crusading Islamic one, fighting the infidel – gazis (holy warriors) engaged upon Holy War, as later Ottomans liked to think? Was it that the Turks were born empire-builders, maybe borrowing this and that from Persia? Or was it, as Lowry asserts, a Christian–Muslim partnership, a “predatory confederacy” of Muslim and Christian against collapsing Byzantium?

This is a delicate question. In 1916 HRGibbons argued that the Ottomans lasted because they took the essentials of empire from the conquered Byzantines. There have been several Turkic empires, the first in the sixth century AD, at the expense of the Chinese (whose T’u-chueh is the first reference to ‘Turks’). These empires of the Eurasian steppe were established by brilliant nomads: the horsetail was their badge. But the empires of nomads do not, by definition, last: the Mongols, for instance, just abandoned central Europe when they found the pasture, apart from Hungary, was not enough. The ruling Turks fought among themselves, absorbed the culture of the conquered and went native, as happened with Manchus in China or Mughals in India. One Turkic empire did last: the Ottoman – for some seven centuries. Was this because the base of the empire was Balkan and Byzantine, rather than Islamic and Central Asian?

There was opposition to Gibbons. An Austrian scholar (later established in London), Paul Wittek, argued strongly that the early Ottomans were holy warriors, and he made much of an epic poem and of a very early inscription over a mosque in Bursa where the title gazi was used. Another scholar, this time a Turkic nationalist, was Fuat Köprülü, who emphasised the tribal, Turkic quality of the early state. The sources for all of this are varied – far-flung languages, in nowadays obsolete versions – and sometimes exceedingly difficult. But it was also, politically, a dangerous matter. Atatürk’s Turkey cultivated good relations with the Soviet Union and anyway looked firmly westward – gazis and Holy War were out of favour, and so, too, were primitive tribal roots. When Istanbul University was closed down in 1932 because of its supposed Islamic obscurantism, Köprülü found himself out of a job – replaced by German Orientalists. Another famous and learned exponent of the Turkic–Islamic past in Central Asia was Zeki Valide Do€an. His institute was disbanded and he went into exile.

It was left to Wittek to keep the gazi thesis alive, in very elegant lectures (which exist in Turkish translation). Poor old Wittek: if Lowry is right, he turns out to have been slipshod – and not he alone, but other scholars who rather lazily took him at his word. The epic poem of which Wittek makes much does not say what he claims for it – he read only the first few lines, omitting hundreds of others which told a different story. His misreading of one inscription, failure to put it in context, and failure, again, to compare it with others, is, as Lowry presents the case, almost comic in its ineptitude.

For Lowry references to Holy War are just rhetoric. The reality, for him, is that Osman, the founder of the state, had Christian allies who were almost his equals. The most famous, Köse Mihal, founded a dynasty, but he was followed by others from the Byzantine aristocracy, in considerable numbers. Lowry knows Bursa very well – he has written Ottoman Bursa in Travel Accounts (Indiana University), an anthology of Western travel writing on the subject, showing just how great was the Christian presence in this town, once the Ottoman capital. When Bursa fell to the Ottomans, the Byzantine governor went over to them, explaining that his own state was finished and the peasants wanted liberation from it.

Lowry makes much of a book written by one Theodore Spandounes, Italianised to ‘Spandugnino’, who was a Cantacuzene by origin, a great-nephew of the Serbian consort of Sultan Murat II. He resolved to write a history of the Ottomans, he says, because he could consult cousins who were part of the court and knew all about it, being “on the most intimate terms with the Emperor of the Turks”. The very nephews of the last Byzantine emperor, Constantine Palaeologus, took Ottoman service and became respectively admiral of the fleet and governor-general of the Balkans (Rumeli Beylerbeyi). The year 1453 marked a synthesis, not a conquest. The Turks saved the Greeks from the Italians, and perhaps also from themselves.