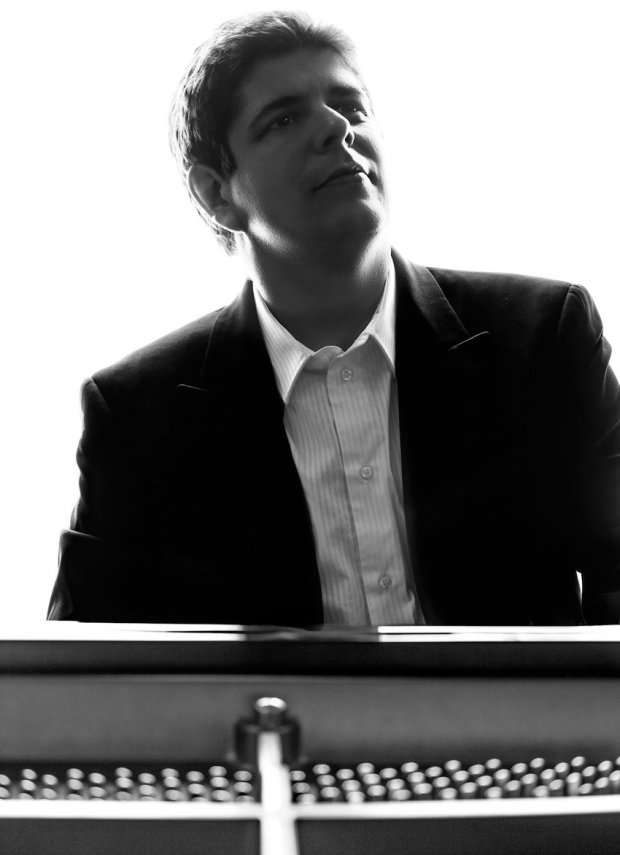 The Spanish pianist Javier Perianes arrived in Istanbul on Tuesday April 10 hotfoot from a lunchtime recital at the Wigmore Hall in London the previous day and is to be heartily congratulated for demonstrating that the lyricism for which he has been justly praised cannot be compromised by being shaken around in a tin box for three hours. Judging by his unruffled appearance, one also assumes he arrived at the Seed, the Sakıp Sabancı Museum concert hall in Emirgan, early enough to avoid the spectacular traffic jams on the roads leading out to this pleasant neck of the Bosphorus.

The programme of his recital (No. 99 in the İstanbul Recitals series, instituted by the late Mehmet Kâmil Şükûn) was made up of works by Manuel de Falla, Chopin and Debussy – mostly those of Debussy’s works inspired by Spain. Perianes opened with de Falla’s Nocturno in F minor, a happy marriage between Chopin and Spanish folk music first performed by the composer in 1899, and continued with the Nocturne in C sharp minor by Chopin himself, a piece more recently made famous by the film The Pianist. At this point it became apparent that in Javier Perianes we have a pianist who understands that Chopin must not be played too fast, and your reviewer relaxed happily into his chair. Perianes is well aware that you can showcase your technique without sacrificing anything of your sensitivity – or, more importantly, that of the composer. This was followed by Chopin’s rather Schumannesque Prelude No. 1 in C major, and after this brief work came the first of the Debussy pieces, ‘Danseuses de Delphes’ from Préludes Book 1, its muted introversion in stark contrast to the exuberantly self-assured style of the Chopin.

The rest of the first half of the programme alternated between these two composers. In adopting such juxtapositions, the pianist set himself a formidable task: Debussy was less than fond of the polished and ‘declarative’ jeu perlé style of the Paris salons, and Perianes initially had some trouble manifesting the chameleonlike psychological dexterity needed to move so rapidly between the worlds of the extrovert (Chopin) and the introvert (Debussy). ‘Danseuses de Delphes’ was, frankly, too loud, making the fortissimo chord right at the end less of the shock it was intended to be. May I respectfully suggest that next time the pianist performs this repertoire he replace this piece with 'Bruyères' from Préludes Book 2? Apart from the merits of the work itself, it would have the advantage of landing him in A flat major, from which the D flat of the next piece would be a logical step.

Then we were back with Chopin, and a gorgeous rendition of the Berceuse. Oh, what a lovely legato! All the complex figures in the right hand were beautifully even, and all the detail – including the lower parts in the contrapuntal passages – was meticulously brought out. For those interested in pursuing the varieties of interpretation to which this piece lends itself, I would recommend giving an ear to the performances by five pianists in the video below, accompanied by excellent notes (only available if you click through to YouTube, by the way).

Yet another – and this time more successful – Debussy/Chopin contrast began with ‘Clair de lune’, from the Suite bergamasque. Perianes chose a slow tempo for the first part, speeding up only when the music demanded it and keeping the ever-tempting rubato at bay until it was actually called for. He is all the more to be congratulated for this as so many pianists get the tempi for this piece entirely wrong. Then came ‘Les sons et les parfums tournent dans l’air du soir’ from Debussy’s Préludes Book 1. There are so many stops and starts in this work that it is easy to lose the underlying rhythm, and regrettably Mr Perianes did not always succeed in maintaining a sense of direction. Debussy marked the last bars ‘Like a far-off sound of horns’; they should have been quieter and more distant. The first half concluded with Chopin’s Ballade No. 4 in F minor, and here the constant fluctuations between threatening moodiness and outbursts of aggressive pyrotechnics were well and truly captured with effortless technical skill.

Perianes began the second half of his recital with three works by Debussy in which the composer attempted to reproduce the genres of Spanish music. In this Debussy was remarkably successful, especially in view of the fact that Spain was a country he never visited. The concert programme actually called for ‘La sérénade interrompue’ (from Préludes Book 1) to be played first, but instead the pianist began with ‘La puerta del vino’ from Préludes Book 2. He strode onto the platform and immediately stopped the chatterers in their tracks with the opening bars of this arresting habanera. I have to say that his performance of these two pieces, followed by ‘La soirée dans Grenade’ (‘Evening in Granada’, inspired by a picture of the Alhambra Palace), from Estampes, was a revelation: never before have I heard them played with the tautness that characterises authentic Spanish rhythm. Other pianists take note!

The rest of the programme comprised pieces by de Falla: ‘El Amor Brujo’ (‘Love, the Magician’) and ‘Fantasia Baetica’ – a work that takes its name from the Roman province of Baetis, in what is now southern Spain. I did not anticipate Perianes being able to reproduce the ‘in-your-face’ style of the late Alicia de Larrocha, the Spanish pianist who despite being only 4 feet 9 inches in height (and with short fingers to match) managed to convey all the sinewy fire of Manuel de Falla’s supremely Spanish works. I was wrong, and all credit to Javier Perianes for both succeeding in this and for not destroying the instrument in the process. This piano playing was… hot. I just hope all those glissandos didn’t hurt his fingers. As an aside, for those interested in experiencing Alicia de Larrocha’s masterly pianism, take a look at this:

Much gratitude to the organisers of the İstanbul Recitals for bringing Javier Perianes to İstanbul. Next time, perhaps, he can give us a concert of all Debussy’s ‘moony’ pieces (especially ‘La terrasse des audiences du clair de lune’) performed at three in the morning on a moonlit night. Perhaps, even, the piano could be moved onto the terrace outside the concert hall. Maybe at that hour there would be no traffic noise – just the Bosphorus gliding by…

On May 22, İstanbul Recitals celebrates the 100th in the series with a recital by the cellist Zuill Bailey and pianist Natasha Paremski.