Until 20 March, the Pera Museum will be hosting the first ever exhibition in Turkey of works by those titans of modern Mexican art, Frida Kahlo and Diego Rivera. With more than forty pieces selected from the Gelman Collection, this is a major show which avoids focusing overly on Frida at the expense of Diego; in fact, her works take up rather less than half of the floor given over to the show. This is a brave choice, given that Kahlo is the modern artist that everyone loves to love. Accidents, tempestuous love affairs, Communism and an early death have all contributed to her legend, which has in some ways come to overshadow her art. Obviously, Kahlo always intended to create a legend - she claimed to have been born in 1910, rather than 1907, in order to associate herself with the beginning of the Mexican revolution - but she probably didn't intend to become the art equivalent of a Bob Marley or Che Guevara, the safe yet 'exotic' option that people can use to show off at dinner parties. Which is a shame, because her paintings really are very good. In this show, they are mostly her self-portraits; others include a painting of Rivera, two depictions of her lifelong supporter Natasha Gelman, and the dreamlike Love's Embrace of the Universe, Earth, (Mexico), I, Diego, and Mr Xólotl (1949, below). 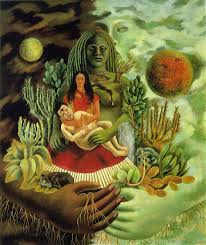 Rivera's paintings are often overlooked, perhaps due to the focus on his work as a muralist. His pieces on display here are actually rather intriguing, ranging from a 1915 piece, executed in Paris and heavily influenced by Cubism, to the more social-realist works which came later, depicting flower-sellers, healers and other aspects of Mexican life as he saw it. In some ways, it seems that the influences he received during his schooling in Paris never really left him, whereas Kahlo, less immediately influenced by what was going on in Europe, was perhaps freer to develop her own style. However, it is the part of the exhibition which deals with the less obvious elements which is perhaps the most interesting. Hanging along the narrow corridor which links the two large rooms are a series of photographs, mainly of Kahlo, who was the more photogenic half of the couple. Of particular note are those by the acclaimed Hungarian-American photographer Nickolas Muray, with whom Kahlo conducted an affair during the '30s and '40s; seeing these colour photos, heavily stylised as they are, provides a neat counterpoint to her self-portraits. A nude sketch of her by Rivera also permits the viewer to see her as others saw her, rather than as she saw herself. In the next room, tragedy overcomes the show; these are the sketches and collages made during periods of personal turmoil and physical weakness. Pages from her diary, which she filled with details of her love life before painting over it, give the  impression of a spectacularly fertile mind. This is a bold show, which takes a risk by going beyond the simple Kahlo clichés to look at her and Rivera in a wide focus, both as artists and as strong, dramatic characters; highly recommended.