Art on the streets

A Conversation With Ill 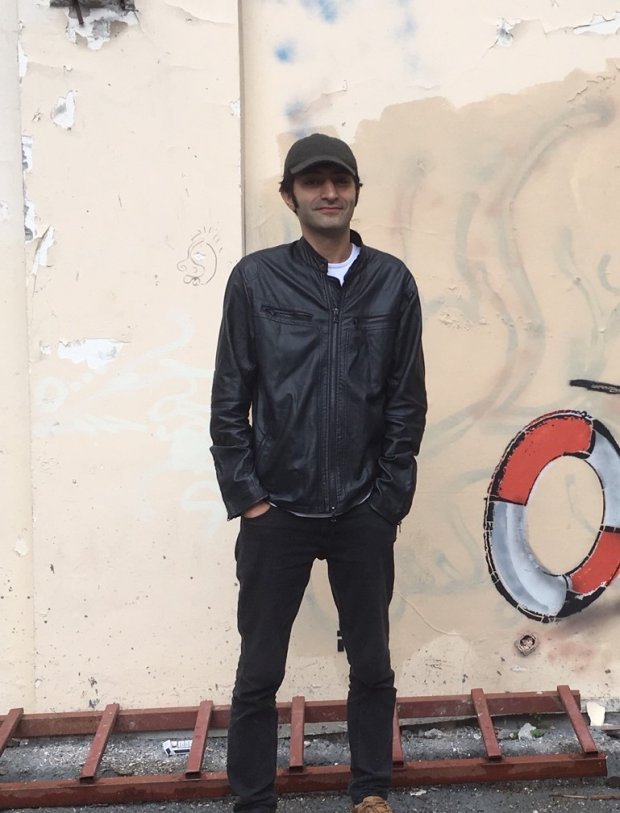 Thousands of years ago, our paleolithic ancestors had the impulse to create art, adorning the Lascaux cave walls in paintings of animals, human figures and abstract signs. Their art remains on those walls today, marking the birth of the human spirit.

Graffiti, or street art, as it has come to be known, is our contemporary cave painting. Street art has become the contemporary canvas for social commentary. It is erased almost as quickly as it manifests, yet leaves an indelible mark on the public eye.

Ill, an artist whose work brought him from the streets of Iran to Turkey, has recently been making a mark on Istanbul. His creations adorn the walls surrounding Taksim Square in the beating heart of the city.

Ill tells Cornucopia his story and what sustains him as an artist, perhaps the oldest occupation known to humanity.

Ill: Back in my hometown of Tabriz, Iran, my street artist friends all had three-letter nicknames. So, they suggested I find one, and I found one that suited me well.

Some have said your images are reminiscent of Banksy. Are you influenced by him? How are you different?

Ill: When I started to paint in the streets of Iran, the only street artists I knew were my best friends, ICY and SOT. Some of my work is similar to Banksy, because of the stencil technique and dark humour inherent in our art. Many street artists are compared to him because the stencil technique is common. But if you look carefully, there are differences between us. Everyone has their own style, but everyone is compared to Banksy because he’s perhaps the most well-known street artist today. But Banksy himself was inspired by the French artist Blek le Rat. Banksy didn’t start stenciling!

Tell me about growing up in Iran. How did it evolve?

Ill: Well, it is not easy to be an Iranian. It’s like being in a prison of thoughts; a prison of actions you take in public. If you feel like dancing, even in a corner, you won’t get away with it so easily!
In the smaller cities there is more tension; in the bigger cities more chaos. It’s like that in many other countries, except you multiply the feelings by an exponential degree in Iran.

Imagine you are in an actual prison, then someone next to you slides a piece of paper and crayons under your cell door. This is the same feeling for me of doing art. It helps your imagination to get out of prison, and get away from the thought police.

How did you start doing art?

Ill: I was expelled from university. But my experience with education was ambivalent. I performed very well in school, and my family encouraged me to study medicine, to become a doctor. I was making excellent marks until the very last year of high school; something clicked. I started skateboarding, and hanging out with the only other artists I knew in Tabriz. I dropped out of high school.

Later I befriended a rich kid who tutored me to obtain my high school degree, then I passed university exams to enter medical school. I got into a good school, with a faculty that were knowledgeable about the world. But the students around me were so…different. I lost my interest, stopped studying, so was expelled.

Why did you come to Turkey?

Ill: I came to Turkey to do stencils more freely on the walls. Here I can stand in front of the wall I am painting on for hours sometimes. In Iran, I don’t remember being able to stand in front of my work for more than fifteen minutes. Sometimes I did big stencil paintings in five minutes.

Which of your paintings were erased the fastest?

Ill: The ones with faces. There’s a collection of about 15 different faces – all people I’ve seen on the street, except something is missing, something is altered. I guess these faces moved people the most.

Do you want your audience to interpret your art, or do you have a specific message?

Ill: Sure I do. My art is generally easy to interpret, but some people are intuitive with their interpretations. When I listen to people who are talking about my work, sometimes I see they know more than I do about the piece. Then I feel like they know me better, as a person.

Ill: Making more art. Feeling like an artist. The flexibility of this feeling is something valuable; it kind of melts your resistance towards things that are actually good for you but sound crazy. Like doing something creative every day. Each day, when there is nothing, you have to create.

I don’t really see myself as an artist all the time. Professionally, I am an artist, but personally I am sometimes an artist. Being an artist from dawn until my head hits the pillow is my goal.

Is there a difference between science and art?

Ill: In science, you follow the rules. In art, you break the rules. But they have a common ground: Creativity.

Some say in Iran street art is not creative; that it is an evil Western influence. But all I know is, it’s what I do. 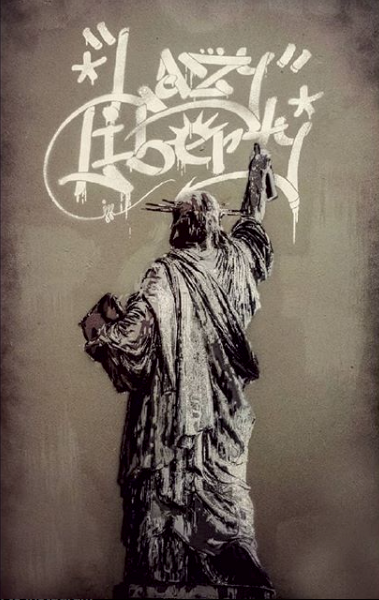 Regarding Liberty, please explain your concept of liberty, and how it is represented around the world.

Sometimes art is fighting, but those who change anything are not artists, are they?

Freedom of action and speech or having an unorthodox lifestyle is not something people really have all around the world, is it?

Sometimes my greatest critics, the ones that took years to get out of my head, were the ones that hadn’t questioned anything. They didn’t challenge their lifestyle or their thoughts; they accepted everything around them but questioned me because I did. It was easier to question me, than to question society." 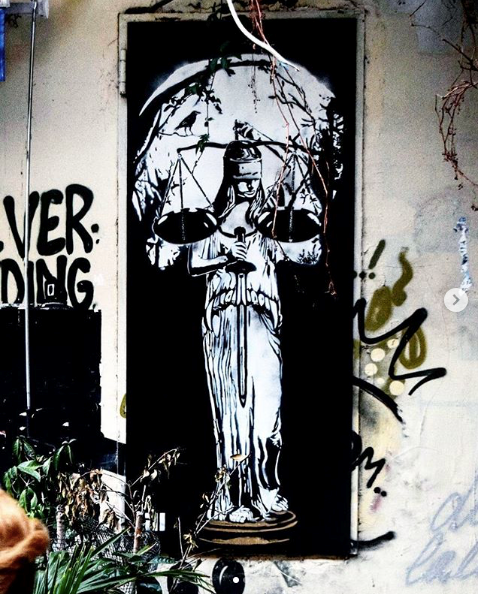 Ill: Well you know what justice is. But my definition is, when you break a piece of chocolate to share it with a kid.

Why would you share it at all? It’s yours, anyway!

Would you hit the kid if he steals it from you?

Would you hide the chocolate to avoid the problem?

Are all these questions crazy? What is justice? Is giving chocolate to a kid a question of justice?

Justice is questioning everything.

Can you describe your creative process? When you get an idea how you go about making the art? How do you decide where to put them?

Ill: I am searching for ideas all the time, but only choose ones that feel right, the ones that excite me the most.

Then I take some photographs with a camera, or from the Internet, and digitally paint the whole idea. I also do some sketches by hand to see where I am going. Then I print and cut the stencil.

At that point, I go out with a heavy load of stencils, looking for walls while walking. It sometimes takes a whole day to find a wall, and it’s because I like the process of walking and searching. I guess making the process more difficult satisfies me a bit. Other times, I have a certain wall in mind and go straight to that wall, but that doesn’t happen often.

Mostly I walk to find a wall. People are now helping me find walls. Looking for walls is a contagious disease!

For more on Ill, visit the artist's website here.