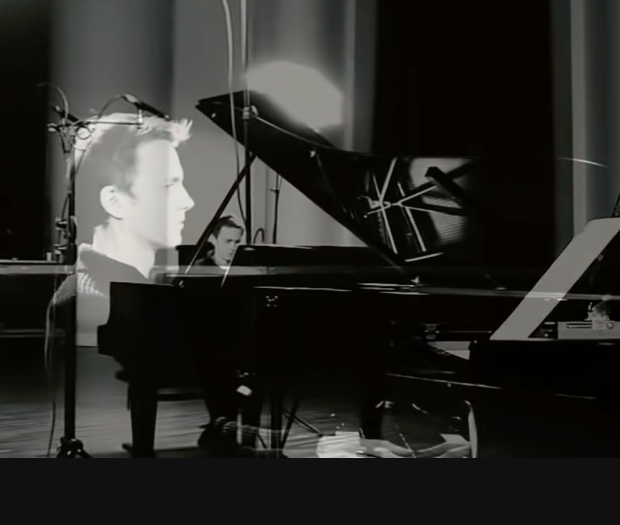 The second in the series of Istanbul Recitals for the 2018–19 season was given by the French pianist Alexandre Tharaud at the Sakıp Sabancı Museum in Emirgan on November 13. For this recital the usual concert hall – The Seed – was not available, so the performance had to take place in a marquee. As a result the acoustics were not up to scratch and the pianist had to compete with occasional bass-baritone honks from the motorboats passing close to the shoreline of the nearby Bosphorus. The flimsy walls of the marquee were, quite naturally, unable to exclude external noise, and Monsieur Tharaud may well have felt un peu gêné (a little put off) by this, but to his credit – and no doubt thanks to his professionalism – he certainly did not show it. From my point of view the auditory contributions from the outside world did not in any way present a problem: indeed, I thought the roar of the aeroplane that passed overhead right at the beginning of the Beethoven sonata was a well-timed portent, and therefore a plus rather than a minus.

Having ensconced myself in the front row, with a close-up view of the performer’s hands – thanks to the good offices of Ms Nazan Ceylan, organiser of the Istanbul Recitals (for whose thoughtfulness and consideration I was once again most grateful) – I found myself unable to take my eyes off a feature of the arrangements that was quite unexpected: in the corner of the marquee to the left of the stage stood a tree of extraordinary beauty. The structure had been positioned so that it just managed to incorporate this tree, whose elegantly-shaped leaves were in the process of turning every shade of orange and brown. It was subtly lit from below, and could easily have been the star of a Japanese print.

And so we settled down to enjoy Alexandre Tharaud’s recital, the first half of which consisted of works by two French composers of the Baroque period: François Couperin (1668-1733) and Jean-Philippe Rameau (1683–1764).

Couperin, who came from a family of musicians, became organist and composer to the French court in 1717. He was also a virtuoso on the harpsichord, and published a book on keyboard technique (L’Art de toucher le clavecin). His fingering system was adopted by JS Bach, who held him in high regard – as indeed did Johannes Brahms. Couperin published four volumes of ordres (suites) for harpsichord between 1713 and 1730. These contain dance movements as well as descriptive and ‘mood’ pieces. Some of those we heard – a selection from all four volumes – had interesting discords and odd suspensions. In the fourth piece there were chromatic chord progressions that reminded me of Bach’s chorale Es ist genug (later quoted by Alban Berg in his Violin Concerto).

Rameau learnt to play the violin during his teenage years in Dijon. Having been removed from the Jesuit college there for neglecting his studies, at the age of 18 he went to Italy and joined a travelling French opera troupe as a violinist. Subsequently he worked in several French cities as an organist (this being his father’s profession). His Suite in A minor for harpsichord, which Alexandre Tharaud played to us, was written in 1706. Rameau moved to Paris in 1722, and in 1745  was appointed composer of chamber music to Louis XV. In his day he was best known for his operas (and was involved in a controversy with supporters of the more conservative Lully), but his books on the theory of music were also famous. These include a landmark treatise on the harmonic basis of chords entitled Traité de l’harmonie.

Both these composers favoured a highly-ornamented style with lashings of trills, turns and mordents. The issue I have with their music is that there is too little underlying content to provide a justification for the never-ending twiddles – not much melody, and little or no counterpoint. Devotees of French Baroque no doubt had a field dayb during the first half of the programme. I, however, thought that the dose could profitably have been reduced a little. Karim Said got it about right when he devoted 15 minutes to pieces by William Byrd and the little-known British composer Thomas Tomkins during his recital in June (see Karim’s kaleidoscope of musical history). I must say that after prolonged exposure to courtly music of the Baroque period, one tends to feel like Candide in Voltaire’s eponymous novel must have felt when, having travelled to the country of Eldorado, he had just eaten his share of ‘a boiled vulture weighing about two hundred pounds’.

Joking aside, however, Monsieur Tharaud may well see himself as a cultural ambassador for his country, and therefore have been eager to introduce us to two of its cultural icons. Possibly, too, he just enjoys playing Baroque music, and no one can blame him for that – I do too. One thing that occurred to me during his highly competent performance of the Couperin and the Rameau was that it might have been enlivened a little had it been accompanied by a Commedia dell’arte performance, with masked dancers pirouetting round the tree in full costume. This might have rendered the music more meaningful by providing it with an appropriately stylised dramatic context.

Here is some Couperin played on the harpsichord by Alexei Lubimov, one of the last students of Heinrich Neuhaus (1888–1964), a famous teacher at the Moscow Conservatory. Lubimov, by the way, is justly celebrated for his performances of modern piano works. The following recording begins with Couperin’s Suite in D minor. The sound is well engineered, and in my view very satisfying.

Now, here is Alexandre Tharaud playing some Rameau on the piano with commendable sensitivity, subtlety and restraint. At 56:15 he performs Debussy’s Hommage à Rameau. I wish he had played this to us – and, of course, some or all of Ravel’s Le tombeau de Couperin – at the concert in Emirgan. But then you can’t have everything.

During the interval I had the opportunity to look around the garden outside the marquee. Here there was a magnificent array of trees of various shapes, sizes and autumnal hues to look at, and a sliver of moon overlighting us. I noticed from a poster on a nearby wall that the Sakıp Sabancı Museum is currently mounting an exhibition of paintings by Osman Hamdi Bey, the Ottoman culture hero responsible for the foundation of the Istanbul Archeological Museum – the institution which occupies the building gracing the hillside between the grounds of Topkapı Palace and Gülhane Park. This imposing edifice was designed by Alexandre Vallaury, the Levantine architect who co-operated with the Italian Raimondo D’Aronco over the drawing up of plans for the Ottoman Imperial School of Medicine, featured in the latest edition of Cornucopia. I found the informative article by Paolo Girardelli, and the excellent accompanying photographs by Monica Fritz, particularly rewarding, as I myself used to live at the back of Botter Han in Beyoğlu, a building designed by D’Aronco.

The exhibition is entitled Görünenin Ötesinde Osman Hamdi Bey (Osman Hamdi Bey Beyond Vision) and focuses on the materials and techniques he used in his paintings, features  brought to light during recent conservation procedures. It is scheduled to run until the end of December.

The first piece in the second half of Alexandre Tharaud’s recital on November 13 was Anton von Webern’s Variations, Opus 27, a three-movement work composed in 1936 when the composer was well into his tone-row period. I heartily congratulate the pianist for putting Webern on the menu, although I am aware that atonal music is not to everyone’s taste. Whatever else might be said about it, it certainly wakes you up, and that is just what we needed before listening to some late Beethoven that demanded full concentration. Monsieur Tharaud gave a creditable performance of the Webern, and successfully brought out the weirdness of the off-the-beat crotchets in the third movement. The second movement has some extraordinarily fast leaps and hand-crossings (especially in the first bar of the second half, which begins halfway between 02:10 and 02:11 in the video to which a link is given below the next paragraph), and I cannot blame him for not getting all of them dead right.

In the next video, the Variations are played by Maurizio Pollini. A word of warning: Glenn Gould plays the piece woodenly, so if I were you I would not bother to watch the YouTube video of him performing it. Pollini plays it with far more sympathy and sensitivity, and his performance has the added advantage of being accompanied by the score.

This was followed by Beethoven’s two-movement Sonata No 32, Opus 111, written in 1822. Here is a link to a BBC critique by Artur Pizarro.

Now, a link to a talk on the work by Andras Schiff from the Guardian website.

Opinions on who plays this sonata best are divided. My own personal favourite is Sviatoslav Richter, who seems to me to be really putting his heart into it in this live performance in Moscow in 1975. The recital had been organised in memory of Heinrich Neuhaus, who was Richter’s teacher as well as that of Alexei Lubimov, mentioned earlier. The performance begins at 0:51, after a short introduction in Russian. The sound quality is not all that good, but in my view watching Richter perform makes up for it – and what a magnificent instrument he is playing! The piano’s tone is absolutely superb. At 14:52 he jogs about in his seat as he plays a part some wags have claimed shows that Beethoven invented Boogie-woogie (an opinion Andras Schiff would strongly disagree with, by the way, and so would I). Personally, I think the tinkly bits that start at 17:13 and 18:10 demonstrate that Beethoven might be said with greater justice to have anticipated New Age music.

Now, here is a cleaned-up version of the same Richter performance with slightly better sound quality but no visuals. The introductory talk has been omitted, so 50 seconds need to be subtracted from the time values given for the previous video.

I think the following performance by Mitsuko Uchida, which is accompanied by the score, is particularly good in the quiet bits.

Alexandre Tharaud performed the sonata without any obvious technical difficulty, and managed the transitions between the many sections of the second movement seamlessly. However, he played it from the music, with a page-turner. At the time when the concert took place, the planet Venus, which rules the arts, was retrograde – that is, it appeared to be moving backwards when seen from the Earth. Perhaps it is this obscuration of my artistic perceptions that explains why my reaction to the performance was not altogether positive. Granted the long and complex second movement must be extremely hard to memorise, but nevertheless I feel that a work like a late Beethoven sonata needs to be played from memory if the performer is to manifest a sufficient degree of emotional commitment.

For the encore, Monsieur Tharaud played us a zappy Scarlatti sonata with great skill and obvious enjoyment, managing the repeated notes with ease: he is in any case widely regarded as a consummate Scarlatti player.

And so to the future. The next in the series of Istanbul Recitals is due to be given by Claire Huangci on December 15. I myself will be in salubrious Manchester on that date, and so will not be able to attend. I notice that in the blurb below the heading of my article (entitled ‘Sound Management’) in the latest edition of Cornucopia, one adjective used to describe the general tone of my blog is ‘waspish’. I freely confess that on seeing myself characterised as a person whose literary manner is a trifle robust, I was somewhat disconcerted: however, on further reflection I decided that any totem animal (or, in this case, insect) is better than none. So if members of the audience on December 15 see a small winged creature flying around the concert hall making a buzzing noise, they are hereby asked to refrain from swatting it, and gently guide it towards a location from which it will be able to hear the performance.