Touché and all that jazz 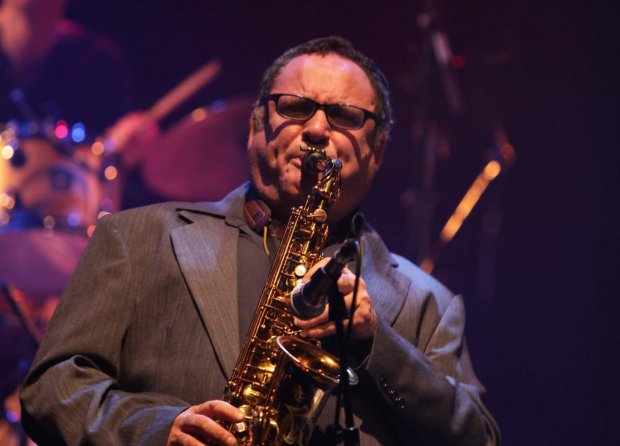 The Gilad Atzmon / Sarp Maden Quartet – with Gilad Atzmon (above) on saxophone, Sarp Maden on guitar, Ercüment Orkut on piano, Eylem Pelit on bass guitar and Derin Bayhan on drums – performed in a curtain-raising event at Istanbul's new jazz club Touché, located beside the PSM (Performance Arts Center) on the lower floors of the Zorlu Center in Zincirlikuyu.

Touché intends to host stand-up comedy as well as jazz, and performers from the USA and the UK are to be engaged. It is an attractive space with quite a small seating area in the centre and lots of seating along the walls for those who prefer to witness proceedings from the sidelines. I sat at the back, conveniently close to the bar, and was plied with food and drink by the thoughtful and attentive staff. 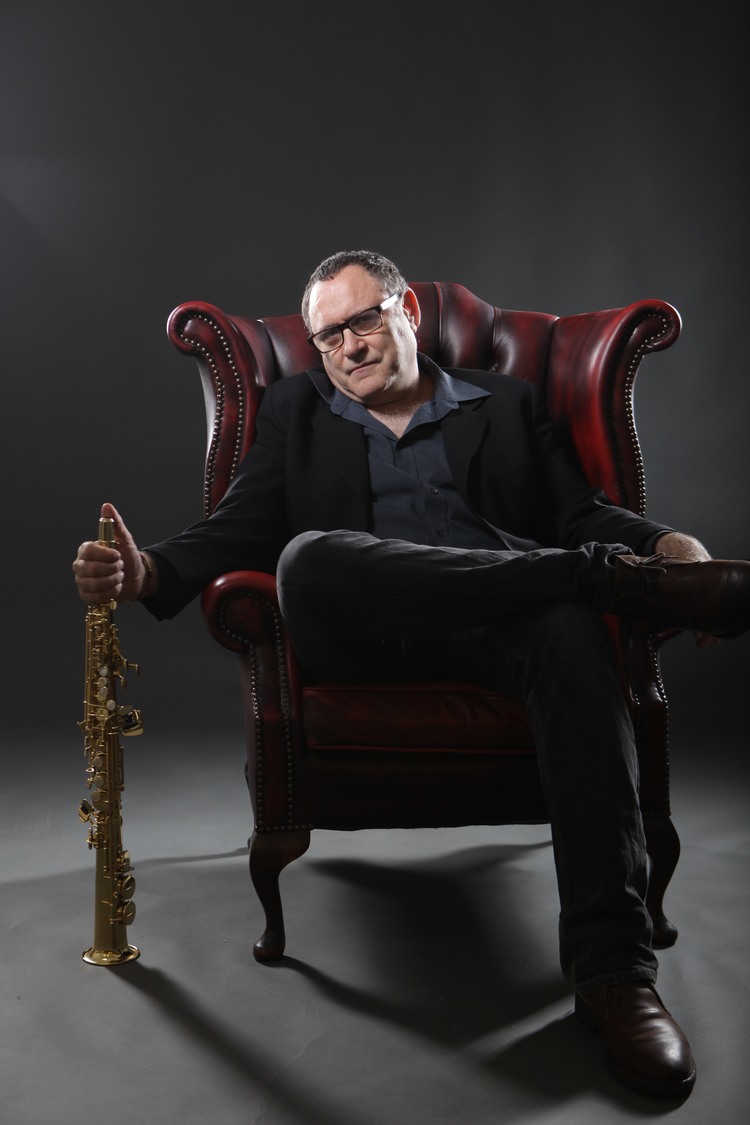 Gilad Atzmon, born in Israel in 1963 and an author as well as a world-famous musician, is known for his political activism. To understand where he is coming from, it will be sufficient to cast an eye over the titles of the first two numbers we heard, both of which are his own compositions: ‘Just Another Prayer for Peace’ and ‘Gaza Mon Amour’. Mr Atzmon describes himself as an ‘ex-Jew’ who has converted to the ‘Romantic Church’. But I will pass over the political aspect of his discourse, as this is a musical blog, and return to the subject of the gig itself.

In fact, nearly all the pieces were Atzmon's, though one or two were by Sarp Maden. As for the quality of the music, Mr Atzmon hit the nail on the head when he told the audience they were lucky to live in İstanbul: ‘You’re pretty much sorted here,’ he said. ‘You don’t need to go to New York.’ 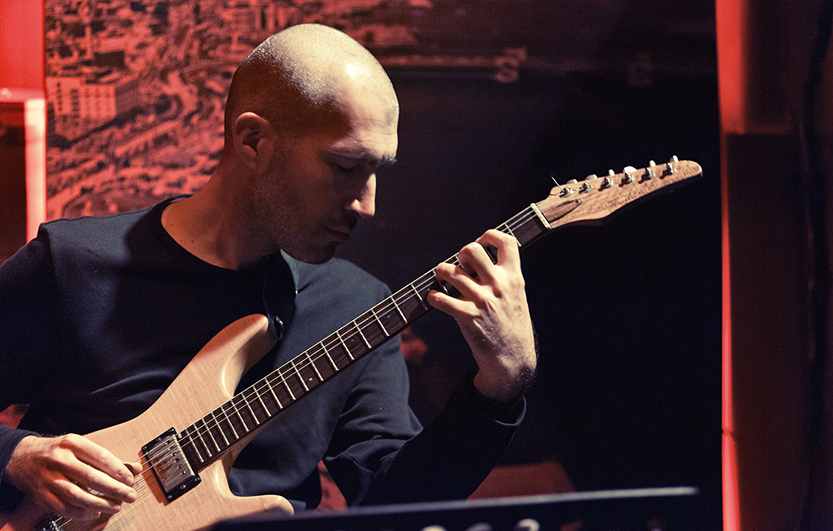 And indeed, his own outstanding virtuosity on the saxophone was well matched by that of Sarp Maden on guitar. Sarp has already been mentioned in this blog as a member of Çağrı Sertel’s group (See Stormy Weather over the Golden Horn – July 2, 2018).

Pianist Ercüment Orkut’s playing was invariably tasteful. Although his style is somewhat traditional, and occasionally lean – not a criticism, as I am all for minimalism – he proved himself able to strike the right note at every twist and turn of the music, and is an ace accompanist. Eylem Pelit on bass guitar is obviously an expert at finding an appropriate harmonic basis for outlandish chords – of which there will be many whenever Sarp Maden is around – and he and Derin Bayhan on drums made a tightly knit and well-coordinated duo.

After the first number, featuring the first of many gorgeous piano solos, Gilad Atzmon told the audience: ‘Jazz is supposed to be slightly disturbing.’ This may well be the reason why he and Sarp Maden make such an effective combination: even when Sarp is playing a slow, floating melody in a high register, his liquid, light-filled tone always has a wistful edge to it – a tortured timbre if ever there was one. And, of course, the atonal arpeggio outbursts are ineffably Scorpionic in their asperity (guess what sign he is?) – hunks of screaming metal hurtle towards you like out-of-control motorbikes cartwheeling through the air as they spin off the race track. Indeed, you almost have to duck.

In the third number, ‘Autumn in Baghdad’, an impressively fast-running saxophone solo was followed by various duets in which Eylem Pelit shone with his well-judged bass accompaniments. After this came Tazecik, which I will translate as ‘Fresh and Tasty’, a piece by Sarp Maden in which the guitar alternately screamed and swooped (is that bird a swallow… or a vulture?), eventually opening out into a soaring melody played in an intensely oscillating vibrato at the very top of the instrument’s range. The piece ended with a sparse, unaccompanied piano solo leading into a final entry by the guitar and drums that I thought entirely musically satisfying. Afterwards Mr Atzmon smiled at his fellow musicians in appreciation of their performance. I had enjoyed it too. Apart from the awesome guitar-playing, we had also heard the most emotionally engaged and technically accomplished saxophone solo of the concert so far.

I will now pass over two or three numbers in which the saxophone played some memorable glissandi and the drummer gave his only solo of the concert, and proceed to the finale. But before I do so, I will record the fact that just before the last piece commenced, I looked around me and saw to my horror that all the women within my field of vision, and about half the men, were looking at their mobile phones. Brain-eating birds patrol the low-frequency brainwaves, as William Burroughs would have said. If I was performing in a concert and saw that no one was paying attention to the music I would be sorely tempted to march off the stage and leave them to it. But then I was brought up in an era in which giving one’s attention to the performance, or at least maintaining the appearance of doing so, was regarded as obligatory.

And so to the last piece. This was an ‘Oriental’ number in which Gilad Atzmon’s Middle Eastern origins stood him in good stead. He clearly knows what twirls and off-the-beat gyrations a gypsy clarinettist will produce when accompanying a belly dance, and his interpretation of this genre was both culturally appropriate and perfectly judged. There were some formidable extended phrases – a feature that, interestingly enough, gypsy music shares with JS Bach. In addition (though this may seem a funny thing to say about an ‘Oriental dance’ of the kind often heard in seedy night clubs), the formal organisation of the piece was most pleasing. The funny ending went down well, too.

I will conclude with some links to YouTube videos of performances by Gilad Atzmon and Sarp Maden. First, three featuring Mr. Atzmon: ‘Gaza Mon Amour’, ‘Softly in the Morning Sunrise’, in which he is joined by fellow-saxophonist Alan Barnes, and ‘Scarborough Fair’ (my favourite of the three – dig the opening duet with tinkly hints of Messiaen from the piano at 01:15, and see the expression on the drummer’s face at 11:36 as he drinks in the lissome saxophone-playing).

Now a couple of performances by Sarp Maden: ‘Burning Circles’ and ‘SFG’, which also features bass guitarist Alp Ersönmez and drummer Volkan Öktem – two of the members of ‘Quartet Muartet’, an earlier venture that also included genius pianist Genco Arı (‘Quartet Muartet’ is well worth exploring on YouTube, by the way, as are all its individual members).