Into Smaug’s Lair with a horsehair bow: Charlie Siem and the Tekfen Philharmonic 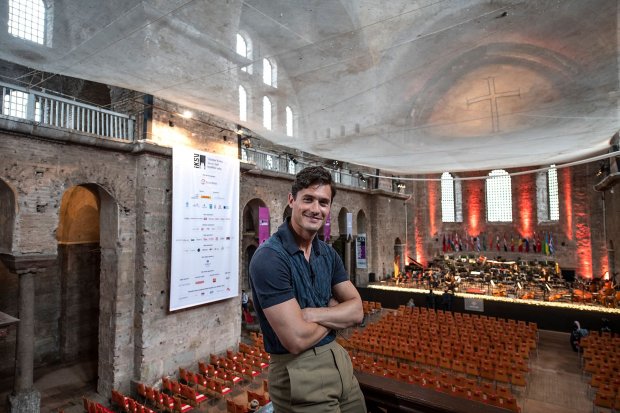 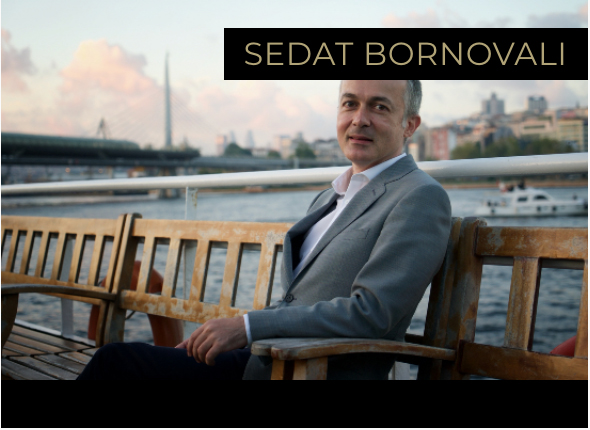 I never thought I would ever hear Tchaikovsky’s Violin Concerto in D Major played by an old Etonian, let alone in a Byzantine church in İstanbul, but that is exactly what happened on Friday evening (May 25) at the second of the concerts I attended during the 46th İKSV Istanbul Music Festival. Charlie Siem (pictured above at Aya Irini) was not the only star to grace the firmament on this occasion: the Tekfen Philharmonic Orchestra under Aziz Shokhakimov also performed exquisitely. 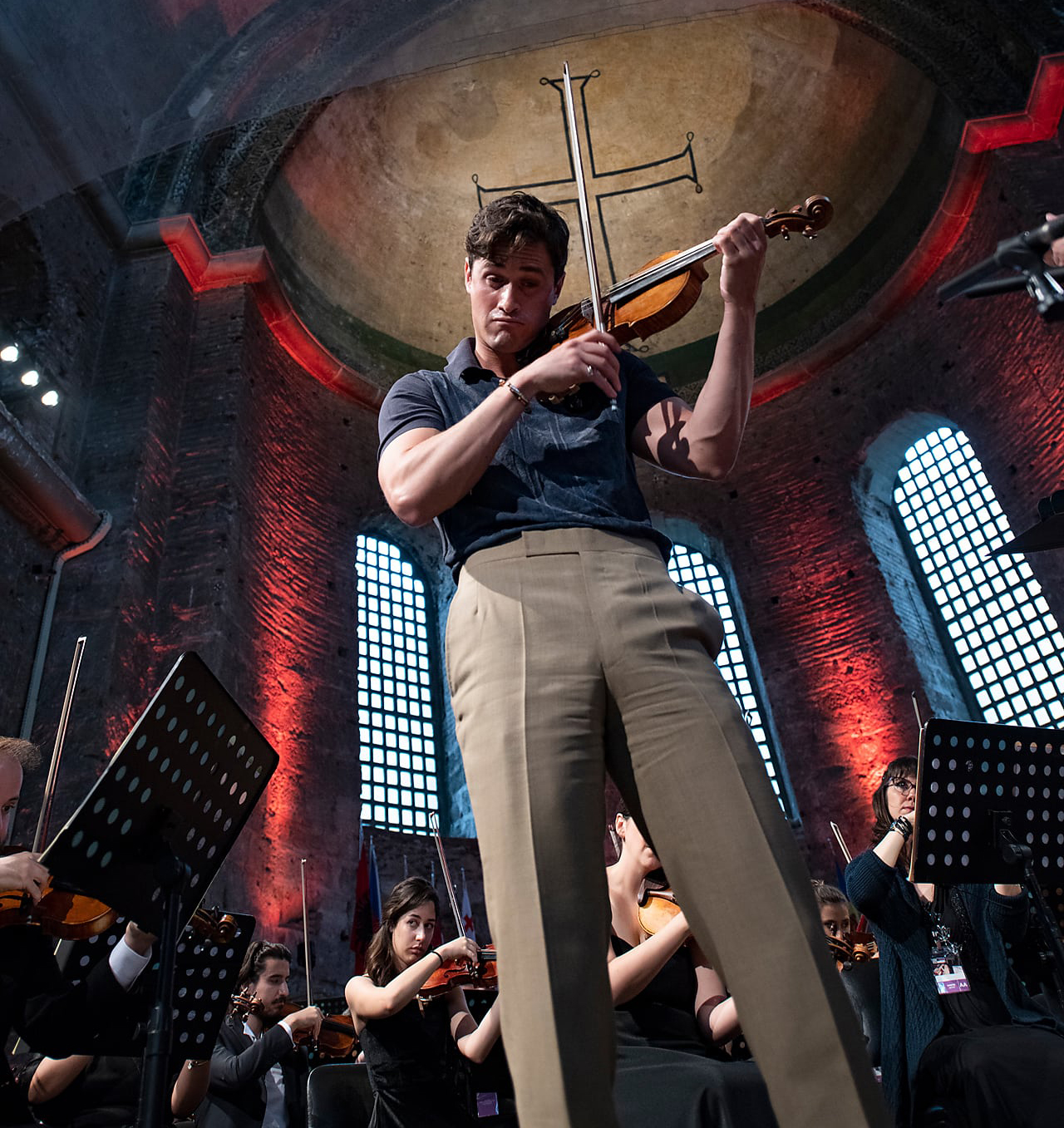 Mr Siem, who is (I believe) half-Norwegian and half-British, studied the violin under Itzhak Rashkovsky at the Royal College of Music in London and is now tutored by Shlomo Mintz. He seems to have applied himself with commendable dedication. As a Capricorn, he is of course endowed with discipline and persistence – thanks to Saturn, the planetary ruler of his sign. And it shows: I could not fault any of his octaves, even in the Tchaikovsky's first-movement cadenza (a Stalingrad for fiddlers if there ever was one).

But I am jumping ahead. The violin concerto was in fact the last item on the programme. When I had located my seat at the Aya İrini (which took some doing thanks to the dim lighting, complicated seating arrangements and most of all, my poor eyesight) and had squeezed myself into one of the uncomfortably squashed-together chairs, I began to contemplate my environment – always a pleasure at this venue with its domes, galleries and rugged stone columns. Up above, two pigeons were flying around under the roof. Fortunately they settled down on a ledge behind the second violins when the music started.

Memories of a previous visit came to mind, when I had listened to the Azeri composer İlyas Mirzayev’s Symphony of Three Seas (commissioned by Tekfen in the days when the orchestra was conducted by Saim Akçıl and its leader was Anatoly Bazhenov). Yet again I felt an inward surge of gratitude both to Nihat Gökyiğit, the founder and chairman of Tekfen Holding, for having the good judgement to give the job of putting an orchestra together to Saim Bey, and to Saim Bey himself for having the good sense to recruit the majority of his musicians from Russia, Ukraine and the other republics of the former Soviet Union. At the risk of being cast into a dungeon as an enemy bot, I would like to ask readers whether they can deny that the école russe has consistently produced more and better musicians than any other in the world.

Perhaps Russki composers have had an unfair advantage: at the Moscow Conservatoire they have always been encouraged to peruse Nikolai Rimsky-Korsakov’s Principles of Orchestration – a seminal work on the subject written between 1896 and 1908. I am sure Sergei Rachmaninov must have dipped into it at some point before writing his third piano concerto in 1909; his orchestration underwent a major transformation between that date and 1940, the year in which he wrote his ‘Symphonic Dances’ in the United States, his country of exile.

It was this last work that was the first item on Friday's programme. The score calls for all sorts of luxuries: harp, contrabassoon, bass clarinet, cor anglais, alto saxophone and xylophone, for instance. All credit to Tekfen for providing these and not cutting corners. For those interested, here is the score on YouTube:

Rachmaninov’s orchestration in the ‘Symphonic Dances’ is far and away superior to anything he had achieved before, making this indubitably his finest orchestral work. It is his use of the wind, brass and percussion sections that gives your reviewer the most pleasure in these dances (the xylophone solo, for instance, turns me on something rotten), and the Tekfen Orchestra gave us all these many and varied colorations with flawless skill – even in those parts where the composer changes the time signature in every other bar.

In my article on the first concert of the İKSV Festival, I somewhat churlishly complained about Rachmaninov’s aimless modulations in his third piano concerto. By the time of the ‘Symphonic Dances’ he had learned (probably from Debussy) that a change of orchestral texture can give just as much of a sense of newness as a fresh theme or a wholesale modulation to a related key. He had obviously taken his game to several new levels as regards rhythm, too: this work is full of satisfyingly obsessive rhythmic riffs. (Russia is an Aquarian country, and thus its natives have a tendency to get a bee in their bearskins.)

I seem to be sticking my neck out rather too much in this piece, but even so I cannot help giving voice to a sneaking suspicion that it was from the Russians that we learned how to exploit the woodwinds to their full advantage. Shostakovich is a case in point. Here are some fantastic bassoon solos from his Eighth and Ninth Symphonies:

After the interval, we first listened to Glinka’s ever-popular ‘Ruslan and Lyudmila’ Overture. I will pass over this, if I may, and record the fact that the audience for the concert on the 27th was quite a different kettle of fish from that at the opening concert on the 25th: nobody in my vicinity even looked at their phone while the orchestra was playing, and the lady in the row behind me whose phone lit up as it received a Facebook message turned the effing thing off entirely before I had swivelled my head even halfway round to fix her with a basilisk stare.
Then Charlie Siem walked onto the stage wearing a purple suit – which, knowing his interest in high fashion, should not have surprised me. 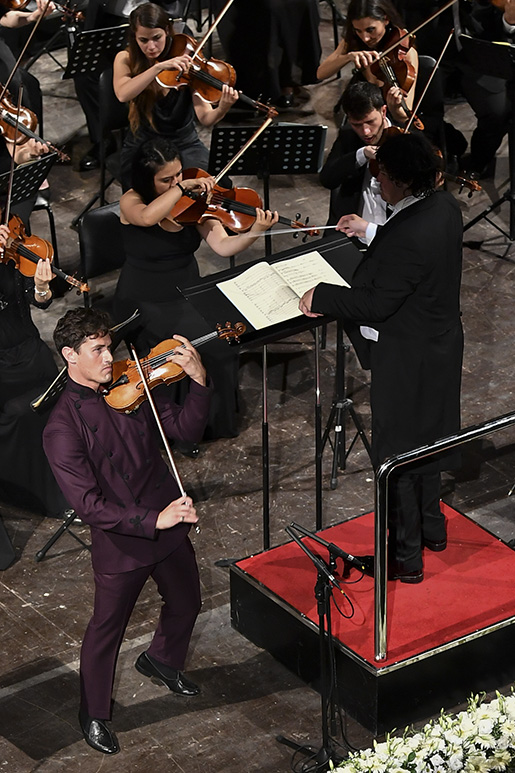 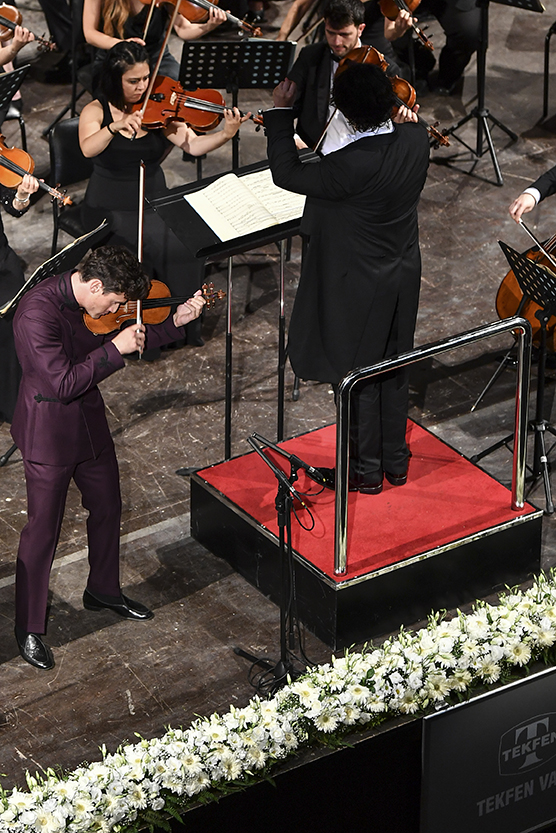 I could see the veins in his neck stand out as he got to grips with the opening section of the first movement of the Tchaikovsky. Even I was nervous, and felt for the poor guy: he was about to be thrown into the arena to face Smaug the Dragon when the cadenza came around – which it does all too soon. Shame on you, Piotr Ilyich, for not giving your soloist time to warm up properly before the cadenza (one of the reasons Tchaikovsky failed to persuade any of the leading virtuosi of his day to play the concerto when he had completed it: it took a couple of years before anyone volunteered to enter Smaug’s lair with only a horsehair bow for protection.)

The soloist’s scales could perhaps have been a little crisper in the first movement, but we can’t all be Itzhak Perlman. He also threw the orchestra temporarily by going a bit too fast at one point soon after the beginning – no doubt because of nerves. But I have no more criticisms. His double-stopping was a wow, and it goes without saying that if you don’t have the speed of a striking mamba you have no chance of getting to the end of this work without being led away frothing at the mouth. 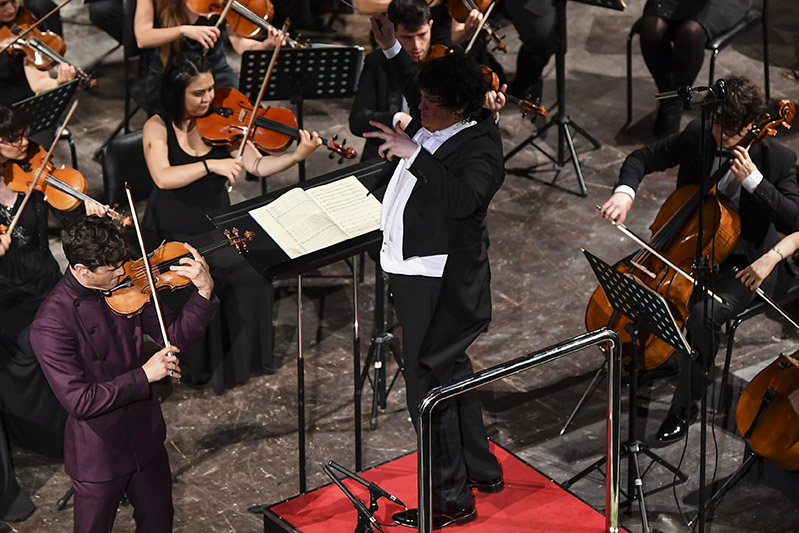 When it comes to stringed instruments, it’s all about tone, and Mr Siem gave us a feast of this in the Andante. I personally enjoyed this part more than any of the pyrotechnics, especially where the violin grinds out its gutsy rhetoric in the lower register. In the last movement I turned my attention to Mr Shokhakimov, the conductor, and noted with amazement the variety of expressive movements and gestures he makes with his left hand. Maybe one day he could publish an illustrated catalogue of these, with hints as to the meaning of each one. They certainly seem to be effective.

I felt the soloist fully deserved the rapturous applause he received. Bringing him to İstanbul was obviously a wise choice. He seemed to like it, too. As I sauntered down the hill from the Aya İrini towards the entrance to the Gülhane Park after the concert, I overheard more than one favourable comment from people around me getting in their cars to go home. Surely that must mean something. It was a spectacular evening from the visual point of view, too: as I stood on the grass between the Aya İrini and the inner gate of Topkapı Palace, the moon was hidden by fast-moving clouds, sporadically lighting them up from behind before being obscured once again by the spooky, dark-fringed mass. I was put in mind of the opening lines of William Blake’s The Marriage of Heaven and Hell:

Rintrah roars and shakes his fires in the burden’d air;
Hungry clouds swag on the deep.

I hope it will not be long before Mr Siem is invited to return to İstanbul to put some more fire in our bellies, and roar at us with his violin.

The Tekfen Orchestra, conducted by Aziz Shokhakimov, was performing with Charlie Siem at Aya Irini, May 25, as part of the 46th IKSV Istanbul Music Festival. For the full programme, visit the IKSV website